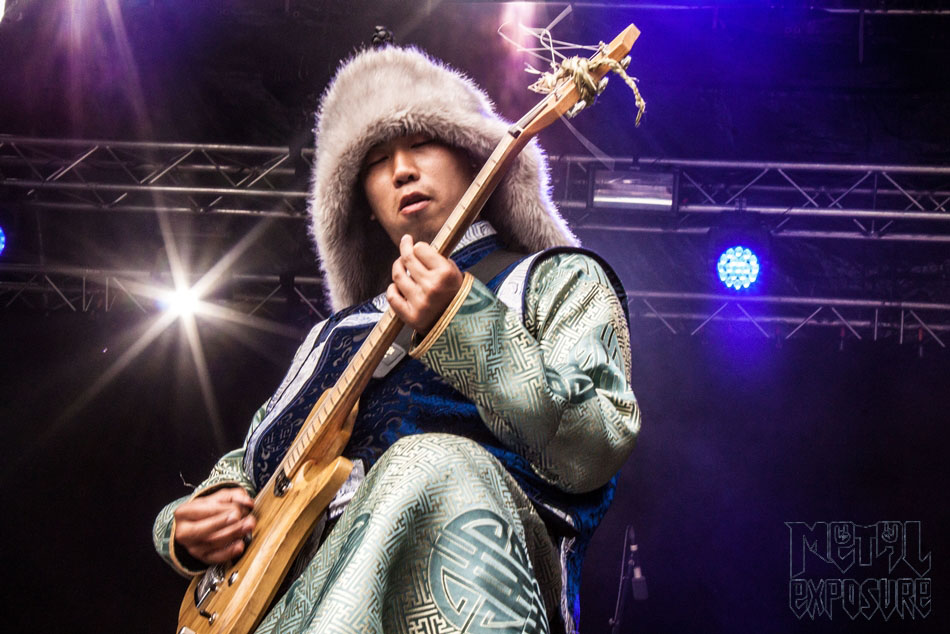 It’s not an everyday thing to find a Mongolian metal band performing at a mainly viking themed festival. So at Midgardsblot 2017 (Horten, Norway) Metal-Exposure talked to Nature Ganganbaigal from Tengger Cavalry about culture, the band as a community and more.

Can you tell us something about your musical trajectory: How did you start/when did you start?
”I grew up in Beijing, China, learning traditional Mongolian music for years. There were a lot of Mongolian musicians in Beijing so that is where the cultural heritage for me is from. I learned throat singing, Mongolian fiddle and Mongolian Tobshuur from my teacher. I started to combine the folk songs and traditional stuff with metal. At some point I heard of viking metal and I thought: ‘we can do a Mongolian version, that would be super dope.’ About five years ago I moved to New York to pursue a film music career. Aside from the film music I decided to start the band again.”

So you already started Tengger Cavalry in Beijing, how did that work when you moved to the States?
”Back in Beijing I played with Mongolian musicians and when I moved to the States I had to recruit people who knew the culture, so luckily we have some Mongolian/Chinese people living in New York. People from all over the world live in New York so it wasn’t so hard to find the right people.”

I read that in another interview that it is hard to express your own culture while living in China. How did you then manage to learn these Mongolian musical traditions?
”There are people playing the music, so if you talk to them, they will teach you in person. That is how all folk traditions work. For the native Americans, it is the same. I wanted to learn native American music like a year ago and I have a native American friend living at the west coast who taught me, so you really have to talk to them. They don’t really write down the music, or have notations. Not like any western music. You have to talk to them and learn the music by memory.”

Which folk/viking metal bands did you find when you thought: lets do this the Mongolian way?
”These were Turisas and Eluveitie. These two bands really come to mind and they influenced my compositions.”

The band is based in New York. Is it hard for you to get through to the European market?
”Not at all actually. We have quite a large European fan base. This is the first time that we’ve toured Europe but there were many sold out shows already. It turned out pretty good. A lot of people knew us here. Like this festival, I’ve met a lot of people who told me that they’ve listened to my music for years and now finally can see Tengger Cavalry perform. My reaction is like: ‘holy shit’. And it is thanks to the internet.”

I have a really practical question and it is about your stage outfit, which by the way looked amazing. Where did you get that?
”That is a traditional Mongolian robe. On the grasslands it is cold, so people wear long suits to cover themselves and you can wrap yourself in it when you go to sleep, it is very cozy. The one I have is for performing. It’s shiny and looks cool. The real one is not like that, it is more practical. I got it when I went to Mongolia, my friend made it for me. It’s brand new and made in a traditional style. When you play the traditional stuff, you need to have the traditional outfit.”

I really like it. It added something extra to the show.
”Yeah it is a traditional themed festival so. Actually I brought my leather jacket with me as well. When we tour in America, I used to wear my leather jacket. In America the culture is a little different, here people are more into tradition.” 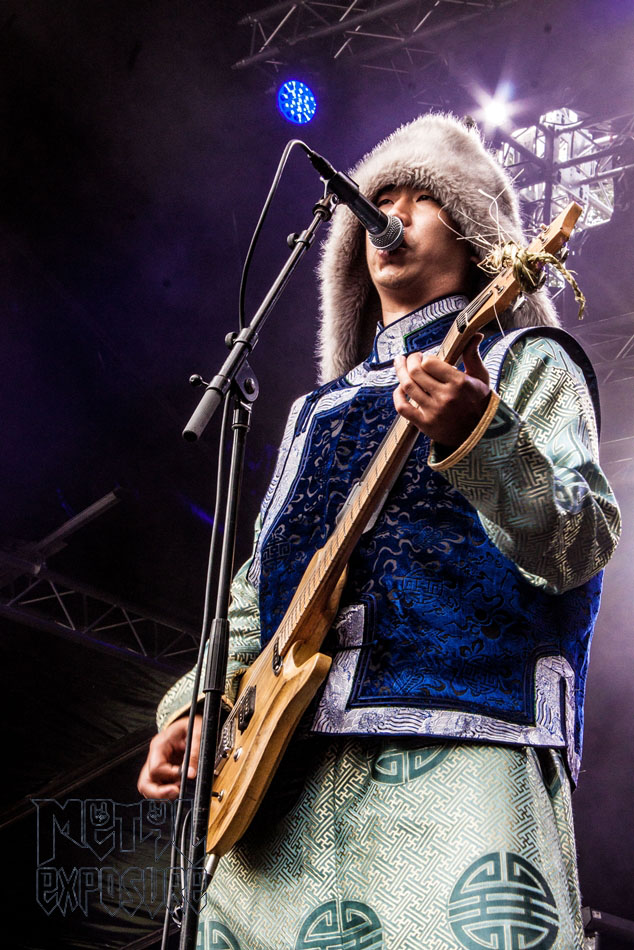 So you adapt your style to where to are playing?
”Yeah, here you have the viking theme, everyone is into culture and shamanism, so I felt that we needed to be more traditional. In America, if you go to a biker bar and you wear that, you’ll look weird so you’ll just wear something in biker style, with a hat. That is how we did it during the last tour. People have a different energy, so you adapt yourself to that.”

I get your point, but should you adapt it? Since it is part of what you want to express.
”If they like it and I feel more comfortable in it, that’s fine. When people are really into tradition, you can represent that. If you play at a pure thrash metal bar and you wear a traditional robe, to me that feels a bit off. There is no disrespect to the traditional and metal culture, so it is better if you wear the leather jacket and you play your music. That is ultimately what matters. The outfit is not that important. It is relevant of course, but the core is the music.”

So you don’t have a preference.
”I do have my own preference but it is not my preference that matters. It is about the communication between me and the fans. It really doesn’t matter what the band wants. A band is a community with your fans.”

Interesting because a lot of bands would say: you should adapt to me.
”Each Tengger Cavalry show is different and each show is about us and the audience together. If the music would only be about you, you are an arrogant piece of shit and if it is only about the audience, it would only be about making money. No, it is about communication. It’s also fun to make every show a little bit different. I get bored of wearing the same thing all the time. Each concert should be unique. Actually each time I play the same riff, I try to play it a little differently. I try to make each concert a little different, because there are people in the crowd who see us three times in a row. There was a girl who saw us in London, at Wacken and now here. All of these three sets were different and that makes my happy, because she got to have different experiences.”

We were at the seminar of Ivar Bjørnson from Enslaved during the festival and he was telling about how the band changed the lyrics to English so that everyone could understand it better. Is that also a reason for you to write the songs in English?
”Yes, when I was in Germany or France, the people do not really speak English but when I am here or in the Netherlands or elsewhere in Scandinavia, everyone speaks English. It doesn’t mean that you loose your culture by speaking English, it makes people more interested in culture. We can talk, we are both from a different place, but we can share our own story in the same language. I find that amazing, because you will learn a lot more about culture. It’s more about communication rather than the language. It doesn’t matter what you speak, as long as you can talk to that person.”

One question about the Mongolian throat singing, if that is the right way to say it?
”Yeah, one time a person actually called it deep throat. I was like: ehh..”

Does it actually work with a different language? Perhaps it is designed for certain sounds that English tongue does not have.
”Smart question. In original Mongolian language, if you sing a traditional Mongolian word, it resonates with the way you sing it, with a resonant spot. So when I sing the English lyrics, I can’t really get it in clear English. When you speak English, especially American English, the words come from the back and middle of the mouth, so I try to move the resonant spot position in the mouth, to make it sound more Mongolian. So you have to pay attention to actually hear the lyrics.”

So you’ve told us that you performed at a Mongolian gathering in New Jersey. Have you ever played in Mongolia?
”Not yet. My friend in Mongolia actually invited me two years ago to play there but it’s just so expensive. You either have to fly and ride a train or fly to Beijing and get a local flight. They couldn’t really cover the costs.”

Is there a metal scene there? It is hard for us to imagine, as we would think of steppes and horses..
”It is really small, but it is growing. There is a huge Mongolian metal fest called Noise Metal Fest. A friend of mine organizes it and he invites bands from Canada, from Europe, but they have to pay their own tickets.”

Do you ever feel that your background and the interest in it deviates the attention from your music?
”Sometimes, yes. Some people are really into the stereotypes: ‘oh you are this, so you must be that’ and a lot of people from America are like that. They are super into stereotypes. I’m like: how about we just talk about what kind of burger you like. Or the kind of bands you like, or the music itself, that is more important.”

So let’s finish the interview with a question about music: what is next on the agenda for Tengger Cavalry?
”I’m probably going to start to write a new album this next year.”

Are there any topics you have in mind or a style change that we can expect?
”It is not a style change but a change in mentality. After having traveled in Europe, there are a lot of new experiences that I probably want to put into the album.”

Interview by Tabitha Duinkerken and Laetitia Abbenes at Midgardsblot 2017 (Norway).