Our fellow countrymen of Izegrim performed on 70.000 Tons of Metal this year. We decided to meet up with them and talk about their experiences on the metal cruise!

How did your performance on 70.000 Tons of Metal came about?
Jeroen: It was pretty simple, we got a phone call from our bookingsagency (Roman, TMR Music Promotions) with the question if we wanted to play at the 70.000 Tons of Metal. Within five minutes we already answered with a unanimous YES! This festival is/was one of the highest achievable goals on our wishlist and finally being part of this adventure was just a dream.

You were announced fairly late, how did the band manage to arrange the trip?
Jeroen: We booked the flights immediately after the negotiations were done with the organisation. Luckily there was still enough room on a direct flight from Dusseldorf to Miami (Air Berlin never had so many metalheads on board, haha). We booked two nights in a hotel in Miami and one night after the boat arrived, so we had some spare time at Miami Beach (and it was fun!). So, actually, everything went very smooth, even though we were announced pretty late.

Where there any problems?
Marloes: errm, no. Not at all, haha. I cannot recall that we even had the slightest problem at all. Everything was perfect from start till the end. Ok ok, the storm on Thursday was a bit creepy and a real challenge to play our gig on a rocky and bouncing boat. Then again; I never saw so many people actually move at our concert, haha ! 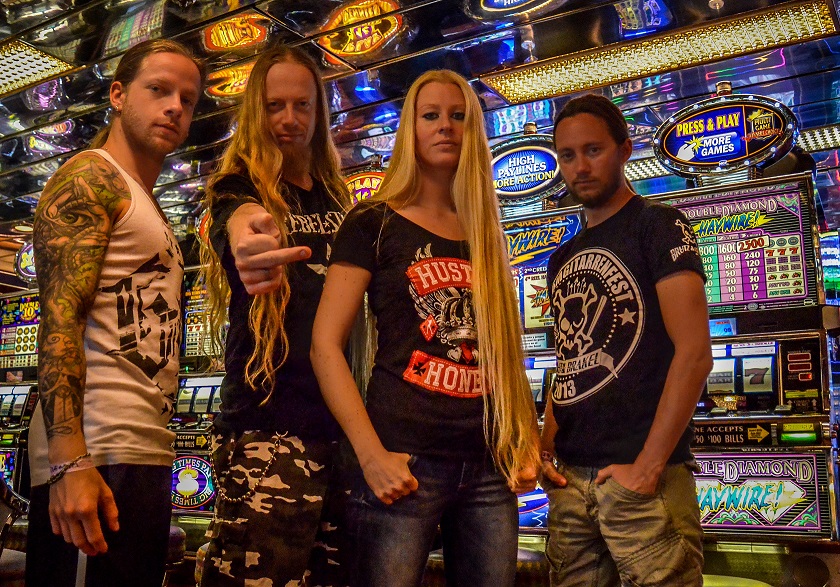 What do you think of the concept of 70.000 Tons? And the part of not having a backstage for the bands?
Marloes: I never could imagine that it would be a non-stop party like we experienced it. I go to a lot of festivals during the year, but I have to admit that all the luxury on board, your own toilet and shower, perfect food etc etc, are things that should be mandatory at every festival ! (oh my, I might sound like a spoiled brat, sorry !!).

Jeroen: We’ve never been a backstage band. We always like to interact with our fans and friends, and it is fun to watch other bands. Backstage is sooo boring, I can’t understand bands that don’t have a look at their collegues and have a nice chat with their fans. When I take a look at the karaoke-bar, it’s pretty clear that all the bands have a great time and have an outstanding time with all the passengers. So did we, it was just awesome to meet so many new people from around the globe !

Are there things that a (smaller) band should take into account when they undertake something like this?
Jeroen: I heard some pretty gruesome horror stories of bands that weren’t allowed to play in the US, so I was pretty nervous to cross the borders. We got a lot of paperwork from the organisation, that we had to fill out for the customs at the airport. If you fill that out correctly, there’s actually nothing to worry about. The whole customs-checkin at the US went pretty fast and without any problems at all.

“So, you are playing at the cruise ?”… yes… “Well, have fun over there, bye”. That was basically it. Just have your papers filled out and with you, and there will be no problem at all. 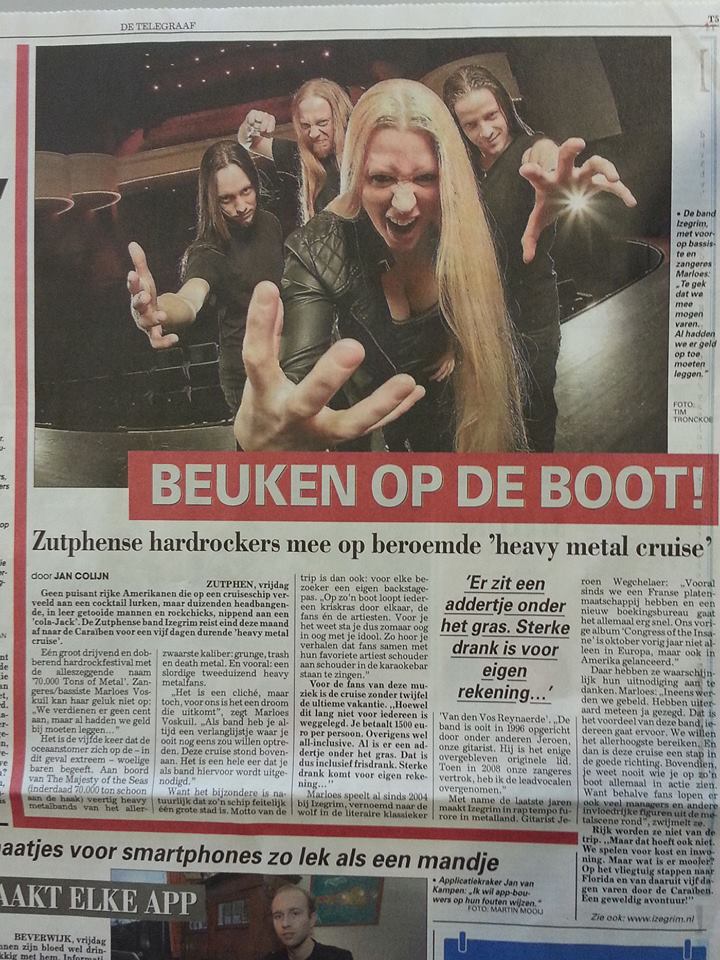 There was a lot of coverage about Izegrim’s participation in the event in the Dutch mainstream media. What do you think about that? Especially since metal is a genre that is not covered widely?
Jeroen: That was pretty bizarre. First we got called by the local newspaper
where we had an interview. Immediately after that I was called by “De Telegraaf” (one of the Dutch leading newspapers) where we also had a pretty big article with a picture included. The next day I was called by the 3FM, a national radiostation. Never thought that an extreme band like us would get any attention by the national media.

It’s absolutely true that metal (and especially the extreme subgenre) is neglected completely OR made fun of when it’s in the media. Luckily all the interviews we had were absolutely cool and interesting.

How did you experience the entire trip? Can you share some anecdotes with us? (we heard something about (palm tree) tattoos..)
Marloes: Like I mentioned before, it was like a constant dream we lived in. Non-stop partying with fantastic people in an amazing atmosphere. Two great gigs, saw some awesome bands (Carcass, Death Angel, Obituary, our friends Cripper), and of course the fun at the karaoke-bar.

Hahaha, palm tree tattoos. You are well informed ! Yes, we all took a tattoo that had something to do with the trip (see picture). It was the ultimate thing we could possibly do, to never forget this whole experience. 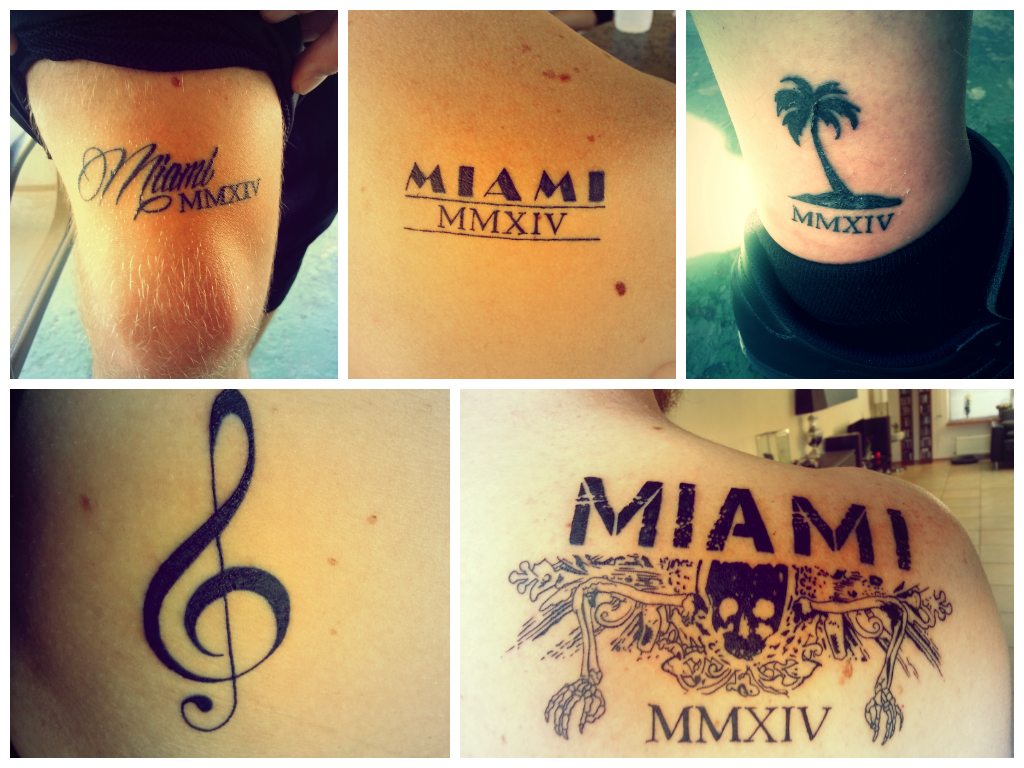 Do you think the experience has resulted in something useful for the band?
Marloes: Judging the feedback we (still) get, we did a pretty damn good job. We reached a shitload of new fans, got some amazing reactions from people that never heard of us. And we talked to some promoters. We’ll see what happens next, perhaps we’ll be on a plane to the US again this year, that would be awesome,haha.

If asked, would you do it again?
Jeroen: without any hesitation: YES
Marloes: ooooh hell YES !!

What are the plans for Izegrim in the coming year?
Jeroen: this year we want to play as many gigs as we can (including some summer festivals). Of course we are constantly working on new material, but we will not enter the studio in 2014. So, keep an eye on our website(s), we might have some interesting gigs lined up for you!

Watch a complication of Izegrim’s 70.000 Tons experience below! Video by Izegrim