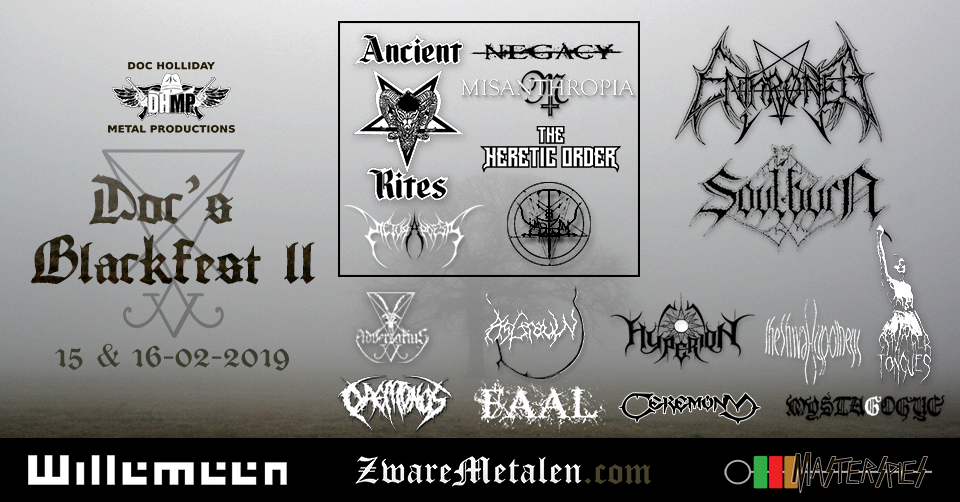 On the eve of the second edition of Doc’s BlackFest (Arnhem, the Netherlands), Metal-Exposure looks ahead to the black metal festival with a short interview with Alwin Roes, Co-Owner Doc Holliday Metal Productions .

The first edition of Doc’s Blackfest in the Willemeen sold out last year. Can you give us a small recap of how that event was for  you?

“Well, as you can imagine it was very exciting: the first time in a new venue and sold out up-front. We had some difficulties during the day ( the festival only lasted only one day) but that’s normal. We dealt with it, and yes, it was an awesome experience, we enjoyed all of it!

Unfortunately, one of the band members of the headliner felt ill (the bass player of Rotting Christ), so we had to move some bands around. Still, we did it! “

The first edition was originally planned to be held in Veghel. What happened and why did you go to Willemeen in Arnhem?

“We organized three editions of Veghel Deathfest in that awesome venue, but the exploiter was an asshole, did not have any affiliation with the genre and its audience. On top of that, we noticed that the lack of good public transport was a pain in the butt. We started looking around and got in touch with Jorrit from Willemeen, and the rest is history.”

Slightly off topic, but of course you’ve heard about the current situation of the Willemeen. If the municipality goes through with their plans, will you have to look out for another venue for your festival?

“We don’t know yet. It SUCKS big time of course that this is going on with this great venue, so we hope for the best. Let’s just do this one as good as we can, and than worry about next edition(s).”

Looking at the line-up for this year’s Doc’s Blackfest, you have bands of all sizes, from well known (f.e. Enthroned) , as well as a debut from Mystagogue. What is your vision when putting together a line-up?

“We aim to combine established names, upcoming talent, newcomers, underground and old veterans, to give a wide representation of what our music scene is about.”

You decided to add two more bands on Friday, on quite a last minute notice. What was the reasoning for this?

“These guys are a befriended band, and they suddenly had a gap in their tour. Fortunately we have a festival this weekend and we could help them out. We helped out these bands and that’s something we try to do at Holliday MP: support the scene ! “

What are the ‘must sees’ at Doc’s Blackfest according to you?

“All bands, all stands and of course the great metal BBQ provided by our friend from MASTERSPIES! I myself am looking forward to the renewed CEREMONY who will release their new album on our label Doc-Records, and of course the other bands from our agency Daemonos, Pictura Poesis, Yaotzin and Misanthropia.  I am very curious to see Dodenkrocht. We played with Adversarius a month ago, that was awesome too.

We missed Ancient Rites when we played Malta last year, so this is a nice re-match. Also, we think the addition of Gnaw Their Tongues is very interesting. We have the debut of Soulburn with their new drummer Marc as well. We are looking forward to the great combination of ALL bands and for the good atmosphere of a 2-day Black Fest in all its facets.

The festival landscape is getting busier and busier. Of course you have the big events like FortaRock, Roadburn, Dynamo Metal Fest and Into the Grave and smaller events like Stonehenge, your own festivals, Graveland. Do you think the event market of metal music is getting saturated (in the Netherlands)?

“I think you have a point, but that doesn’t keep our blood from running where it has to go haha. I hope we survive with our fests and efforts, and next time somebody asks this question, I hope our fests are on that list of festivals in the Netherlands that live on and gain a better reputation with every edition.”

Doc’s Holliday Metal Productions organizes several events. One of the most notable was the Doc’s Metal Cruise, that was hosted in August. Having been to one of those metal cruises in sunny Miami, I can’t help but wonder: does this formula work in the Netherlands and will there be a next edition?

“It started out as a wink to the big brother you”re referring to, but it turned out great and it sold out. Everyone was very enthusiastic. Yes, we are working on the next edition, after BlackFest we’ll throw that one in a higher gear, so expect news on that event soon!

Which bands do you dream of booking on one of your events?

I hope to one day book Candlemass, because they are my all time favorite ! Dismember will be playing again, but that’s a risk I cannot take, as I pay for all the investments myself. Although I believe booking Dismember would give a full house, I’ve been wrong before and chances like that cost me a lot of money. We’re still looking at our own Doc’s Open Air, and for that I would like to get Alestorm. I think they are an open air band pur sang… PARTY! “

Any last words for the readers?

“Thank you for the interview and from me, Dave and all at Doc Holliday MP we hope to see you all in a few days at Willemeen to join these two days of black metal mayhem!”