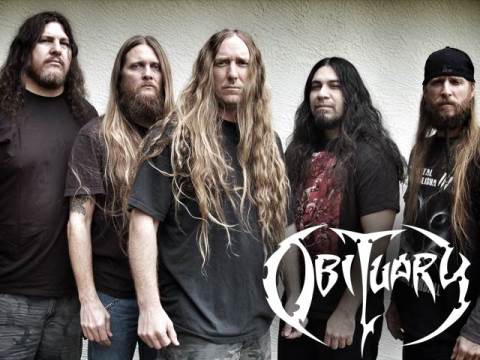 By Laetitia
26/07/14 – In a unique interview setting – a cozy man cave to be – Metal-Exposure interviewed guitarist Trevor Peres from Obituary before their headlining show at Stonehenge (NL). The band financed their upcoming effort through a crowdfunding campaign: “The reason to do a Kickstarter campaign was because we are all business minded and it was a way for us to control what goes on behind the scenes of making an album.”

Obituary has been doing some big European summer festivals in the past months, Stonehenge is probably one of the smaller ones. What kind of festival do you prefer?
“Ah, I don’t have a preference. I like playing club shows and festivals. To be honest, the big festivals are obviously amazing, because there will be 30.00 or 40.00 people, but I like a small club even better. There will be 400-500 fans there, it’s up close, intimate and personal , it seems like you get more energy from them. But in the end, it’s all good.“

What can you share about the new album?
“Well, I can give you some of the song titles. One is called Visions In My Head, another one is called Inked In Blood. I can’t give away the title of the album yet, because we are just starting the marketing campaign, so that will be a surprise. The artwork is a little different for us, but we used the same artist.” Trevor adds jokingly: “But there are no dragons on the cover or dudes with swords. The album is heavy as shit though, it’s classic Obituary.”

What makes a good death metal song according to you?
“I guess the rhythms have to be catchy and they don’t have to be extremely technical. Some of my favorite metal and death metal stuff is very simple, but when you hear it for the first time it is something that you will remember. Technical death metal is real killer for what it is, but you can’t remember what they did after a while. But if you hear one of the new Obituary songs, you’ll be humming it in your bedroom tonight.”

Obituary has financed this album through a Kickstarter campaign (crowdfunding), did it influence the way you write the songs?
“No not at all. We were so deep into writing already. Most of the songs were already written and the band was arranging patterns of the songs and such. The reason to do the Kickstarter campaign was because we are all business minded and it was a way for us to control what goes on behind the scenes of making an album. It enabled us to record the album in our own time for example. We literally said: when it’s done, it’s done. There is an old commercial in America for a wine company and it said: we will sell not wine, before it’s time, you know. It was the same with our music.”

You raised six times more money than your original goal, right?
“We set the goal at 10,000 dollars, but we raised like 60,000. The thing about Kickstarter, which I didn’t know was that when the money was collected sometimes credit cards wouldn’t work or people pulled out at the last moment and we think that some of it was even fake. So at the end of the day it was 45,000, but the Kickstarter campaign page still shows it was 60.000. To me, that’s bullshit. But hey, it was still amazing. We raised our goal in less than 24 hours.”

Looking back on the crowdfunding project, would you do it again?
“I don’t know, probably not. Not for my music. It was a cool experience, but to be honest, I don’t think it’s really necessary. There were some negative reactions as well, some people thought we were begging for money. That wasn’t the case, investors got something in return and they helped us to get out of the record industry thing. I guess if I would do an invention, or start a restaurant. It would be like: you could have a lifetime barbeque at my restaurant if you help me open it, haha.”

So Obituary doesn’t necessarily need another Kickstarter campaign, would you say it could be a useful tool for other (starting) metal bands?
“Big time. With the internet you can sell it on your own, it’s simple to do. You can sell it on Ebay, on Itunes or via a website. If you are a young band and the money could help you record an album, get it pressed and so on, it’s a beautiful way to start it. Maybe after that, if you sell a bunch or records, you’ll have some money to do the next one. It becomes a snowball effect. For us, we are the captain of the ship now, so to speak. We are going to make more money from the sales (ed: because there is no sales deal with a record label involved directly) and because of that, the next album will be easier to take care of financially.”

What are your tips for bands that want to start a crowdfunding campaign?
“You’ve got to be on top of it. Promote it big time. Get the word out. If you have a following on Facebook and other social networks, you pump it through that. Shoot low: don’t try to gain 100.000 dollars. Sepultura tried to do that a few years ago. They didn’t even made their mark. I think they were aiming at 100 grand and only got 30 or 40. When that happens, you don’t get the money. It’s over and the money goes back to the fans.”

What is still on the bucket list of Obituary in terms of musical achievements?
“To do? It would be cool to do a big tour, like in arena’s. That would set us for life, also financially. Just once, to go platinum in America. Which I never expect to happen, because we are in a death metal band.”