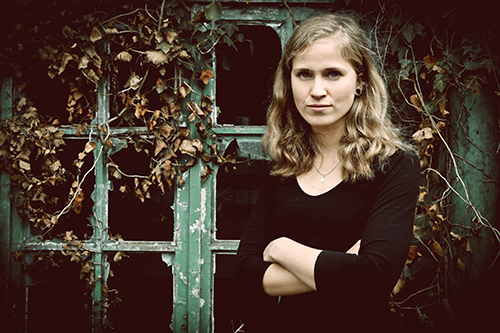 At the beginning of February, 22-year old Merel Bechtold was announced as the new, permanent guitar player of MaYaN, the symphonic death metal formation around Mark Jansen (Epica). So, it’s time to get to know this new face in MaYaN a little bit better!

The first instrument Merel Bechtold ever played was not a guitar, but a piano. After some years, she quit. “I don’t really know why I started playing the piano in the first place. I never really enjoyed it.” Another occurrence that lead Merel to leave the piano stool was the fact that her teacher became ill and eventually passed away. For a while, Bechtold abandoned music altogether.

When she was fifteen years of age, Merel slowly got to know the metal scene. “I used to skateboard and a friend of mine, with big spikes in his hair, gave me an Ozzfest compilation. I think this was in 2004. It featured bands as Lamb of God, DevilDriver and In Flames. I listened to the CD and then I arrived at track 14, which was a song of In Flames. It blew me away. I started exploring metal on the internet and found bands as Static-X. I saw a flying V guitar for the first time and I loved it immediately.” Metal renewed the (back then) teenager’s interest in music.

Seven Nation Army
Bechtold became acquainted with the guitar in high school. “There was a boy in my music class and he taught me the riff of Seven Nation Army by The White Stripes. I loved that. My father owned a guitar, so I practiced that melody over and over. Subsequently, I bought my own electric guitar. I actually wanted to play bass, but my father advised to play the guitar. A year later I did buy a bass guitar, but I found it to be a bore. I’ve played it four times and never touched it again.”

One of the guitar players that inspires Merel is Jason Richardson. “He’s about my age and used to play in Born of Osiris, now he is a member of Chelsea Grin. He has a neat way of playing and produces a nice tone. If you ask me, he is a genius. When I practice, I look at John Petrucci of Dream Theater. His solo’s are amazing and I can train my guitar skills by playing along.”

Nervous
The 22-year old is an experienced guitar player. She has performed with her own melodic death metal band Purest of Pain since 2008 and she studies to be a music professional at the Rockacademie in Tilburg. Despite of that, the guitarist felt terribly nervous before her first show with MaYan. “I played a lot in the week before the gig and we had a band rehearsal for five hours. My arm hurt a little, which was a hindrance. The night before the show I repeated the songs in my mind and tried to puzzle which part of the song came next and I didn’t know. I forgot because I had been so active with rehearsals and preparations. On the day itself I felt feverish, but I wasn’t ill. I felt a chill, sweaty and shivery at the same time. During the show that feeling vanished, performing and playing came naturally.”

The other band members were pleased with Merel’s performance and asked her to be a permanent member. “They thought I was well prepared for the rehearsals and they felt I flawlessly played along with the songs. The gigs turned out great and the audience appreciated me, which is very important. Also, we just hit it off.”

Underestimated
Playing on the same level as the musicians of MaYan wasn’t effortless according to Merel. “I practiced a lot and I underestimated it. I listened to the songs and I figured I would learn them quickly. I started writing down the music on the basis of what I heard. However, these songs were pre-productions of Antagonise and therefore there were moments I couldn’t hear what was played very well. So I struggled with ten seconds of music for an hour. Next thing, you have to play with professional musicians and you have to achieve the same level. In the end everything worked out just fine. I’m very happy with the result.”

Being a part of Mayan has had a positive influence on Bechtold’s life so far. “I have more fun. I enjoy practicing a lot more. I want to get better in playing the guitar and I want to do more.” A project that Merel is going to participate in is Karma Flow, a Rock Opera Video game.

One thought on “Interview with Merel Bechtold”