To founder and guitarist Ben Varon’s suprise, the latest effort of Amoral – Fallen Leaves & Dead Sparrows – was generally well received. “The last two albums were more easily accessible and there were more commercial songs and this time around we did just not give a fuck about that. Let’s do a 9-minute song if we feel like it. A bunch of long songs that make no sense on paper.” Metal-Exposure met up with Ben Varon and vocalist Ari Koivunen on Tuska Open Air in Helsinki. 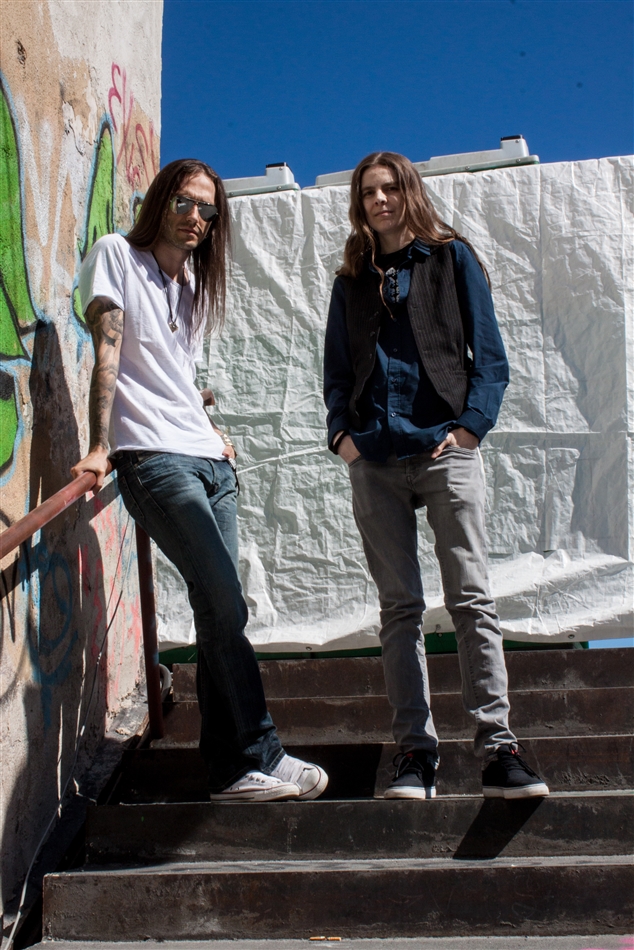 What can you tell me about the general reaction to Fallen Leaves and Dead Sparrows?
Ben: “Surprisingly good. We weren’t expecting it. The last two albums were more easily accessible and there were more commercial songs and this time around we did just not give a fuck about that. Let’s do a 9-minute song if we feel like it. A bunch of long songs that make no sense on paper. Let’s just do an album that we would like to listen to at this time of our lives.

And people tell us that this is our best record. Maybe it shows, the total attitude of not caring at all about: is there a single on this album, or is this what the music scene is looking for at the moment, blablabla. We are just doing our own thing. Especially since we have our own record label, we don’t have to ask anybody’s approval. We are happy with it and we are glad that people are enjoying it.”

Do you set certain goals for each record that you make?
Ben: “To make a better one that the previous one. I think that’s it. This time around we did have some guidelines beforehand. Before, it was always just write songs that we enjoy and record them. This time we actually decided before the songs were written, what kind of songs we wanted to write, which were the proggy, big epic songs. Having some guidelines was actually good for us. Like having deadlines, otherwise you would never get anything done. The album did still end up being versatile, not like there is just one kind of song all the way through. But I think this approach works, I think we’ll continue it on the next one.”

Amoral is going on tour with Dark Tranquillity in November. What is the best thing about touring for you?
Ari: “Travelling, but also playing for new audiences. Just having fun together.” Ben: “That’s the thing about touring, it’s not for everybody. Just don’t really have your space, you miss home. For me, I love travelling so much, seeing new cities and then getting to play your songs for new audiences. It’s the best, we cannot wait to go on tour.” Ari: “Yeah, that’s when I’m most relaxed. ” Ben: “You don’t have to do anything else, walk around Paris or Budapest, you play your shows and have a few beers, what’s not to like. Usually the weather is always better then in Helsinki too.”

What do you like least being on tour?
Ben: “Cold showers” No internet? “That’s usually fixed these days.” Ari: “When I’m on tour, I don’t really give a crap about it. At home I need it, when I am abroad, I just want to have fun with the people that I am surrounded by. Of course you miss home, but then you’ll be like, in two weeks I will be at home relaxing. That’s about it.”

What are items you always brings on tour?
Ari: “For me, gaming equipment. Nintendo, everything gaming related.” Ben: “It’s ridiculous. When we walk through an airport with him, and we just have an Ipad or a laptop. When he opens his bag..” Ari finishes the sentence: “A laptop, an Ipad, a Nintendo 3DS.” Ben: “I say, you realize we are going away for only a week and then he says he wants to be able to play different things.”

Do you have any Spinal Tap stories to tell about your tours?
Ben: “Well, on our very first tour we ever did with Finntroll, the legendary thing happened: we forgot our sound engineer at the border. We were stuck at the Swiss border for three hours, they checked the bus for drugs with the dog, the whole nine yards. When they finally let us go, everybody jumped on the bus. About two hours later, somebody noticed. She had no phone, she was just taking a bathroom break and came back and the bus was gone. Nobody noticed it. That was pretty embarrassing. But the cool thing is that she got a ride from someone in a Porsche and she was at the venue before us and she was waiting there angrily.”