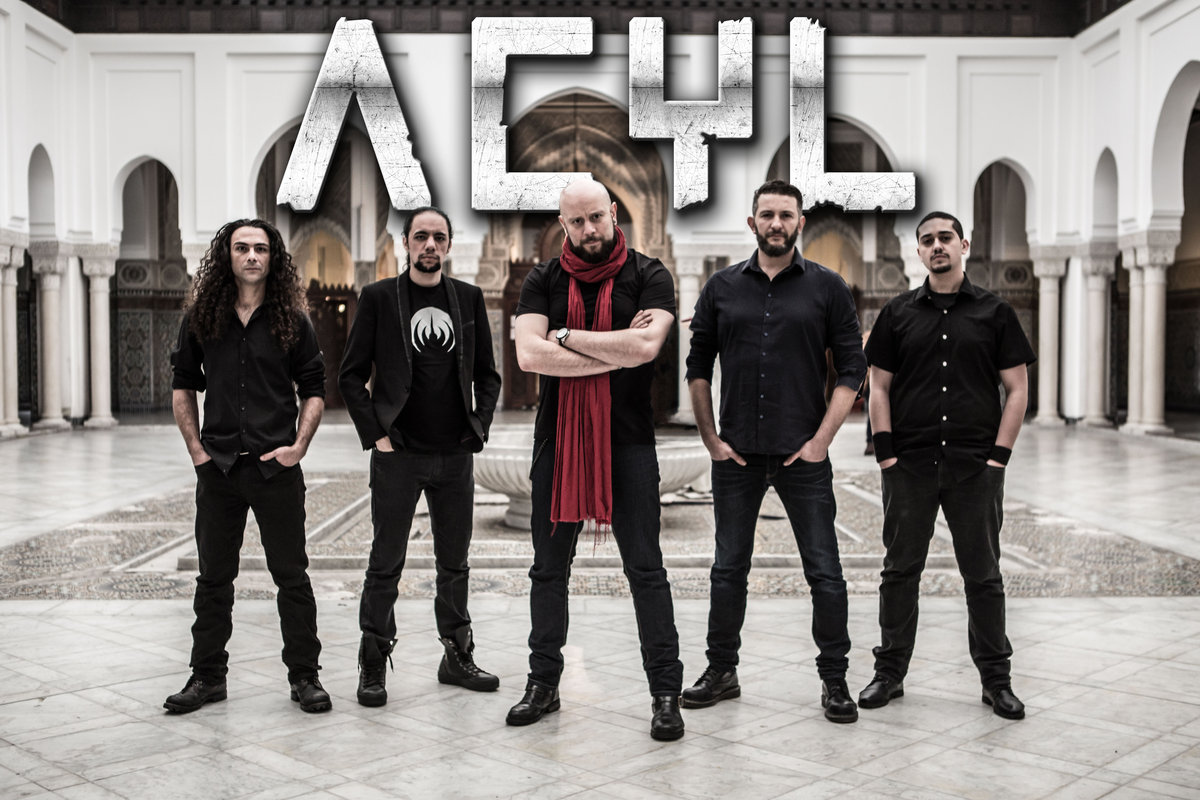 Last summer Ingrid and Tabitha had an interview with Amine and Abder’Rahman from Algerian band Acyl; you can read it now

Metal-exposure (ME): We noticed that the songs you played today are much harder and less oriental music influenced than your show two years ago, how come?
Acyl: It’s mostly because of the new album. The songs on the new album are more metal and less quiet. First of all because we had to adept to the audience, the audience here likes tough things, so we chose to play some tough things, but we chose to have a lot of traditional instruments too.
ME: but that means that if you’re playing in France for example, you have a different setlist?
Acyl: Not totally different, but we can add 2 or 3 different songs, that maybe are a bit more quiet; we can adept our music to the audience.

ME: that’s interesting, why do you think that works better for France, but not so much for here (Germany)?
Acyl: Not specially for France, it depends on the festival, it depends on where we are playing and on the other bands that are playing, we need to fit in. But for now, we of course want to promote the new album.

ME: This new album came out in 2016, is there anything new you are working on already?
Acyl: We actually started working last year already on a new album. Probably at the end of 2018 this will be finished. It takes us time to write the music because we go to Algeria, to the Sahara and all the different regions of Algeria, because of all the different styles from there that we are playing.
If you want to be authentic, like our name means in Arabic and you want to be genuine, we have to go to where the music ís, and where our influence is, and that takes time and effort.

ME: Saying that, where do you get your inspiration from? Of course it’s the culture, but can you give us any specifics, what are your sources?
Acyl: Obviously the main source is our country Algeria, even though we all live in France now. If you look into the history of the country you will see that many different civilizations came and disappeared again, and that created a lot of different ethnicities there, with different traditions and a different style of music. You can compare it to here in Germany (where we were when the interview took place ed.). The Bavarian music style is different than the music in the other side of the country. This is why we háve to go back to Algeria to let us get inspired.

ME: So you talk to people and listen to their stories?
Acyl: Especially musicians, we listen to what they do and say and mix the different Algerian styles with metal to make it more accessible.

ME: Speaking of that, your music obviously appeals to the people here in Germany even though you come from a culture that is quite ‘far’ for most people; do you also have an audience that understands where you come from and that can sing along with your Arabic lyrics and understand those lyrics?
Acyl: What we notice every time we do a show is that people end up dancing and this is their body language; they can’t sing Arabic. They don’t understand the lyrics, but they are trying to understand the music.
Also when I’m on stage I am concentrated on trying to give a good show and am not looking to the audience all the time, but when I take a look at them I always see people trying to sing along and that is really cool because they really are trying to make an effort.

ME: Is there also a metal scene in Algeria to whom you can play your songs, and do you give concerts there?
Acyl: When we can, we go! The two or three times we were there, the people went crazy! It’s incredible, they were singing and jumping. We didn’t do a lot of shows there, but the times we did, it was exceptional.
Because of our schedule we can’t go there very often but the metal community in Algeria exists, though it is still very underground. Metal in Algeria existed already in the 90’s but it is not as organized as it is in other parts of the world.

ME: Especially the last few years we see an up rise in the metal community in the lands in the Mediterranean world and The East, do you think you play a certain role in this growth?
Acyl: We really don’t know, and can’t say much about that. We are glad to introduce our culture to the occidental world. If it can help teenagers to identify themselves to what we are doing, that is great, but I think it is better to stay modest, and I don’t think we are doing something that is very special.

ME: There have been a lot of problems lately about Oriental culture coming into Western Europe, and what you are doing is presenting your culture proudly to an audience that maybe doesn’t have that much contact to it in a positive way; do you think you can play a role in that?
Acyl: Like we said, we better stay modest. Tomorrow I would be ready to stop playing music because we did exactly what we wanted to do, we really want to introduce the positive things about our culture to the world, just like all the other people that come to Western Europe do, they also bring everything. People might have prejudices that they only bring chaos, but this is absolutely not true. People are leaving the war and massacres. You better learn from each other instead of putting each other in corners. People that are welcomed into to Germany for example have to learn how to adept to the occidental world and the other way around we can maybe teach you how to be more human because this is a very individualistic society where people care a lot about their jobs and money and oriental culture is focused much more on family and helping each other. It is a matter of giving and taking and we have to learn how to live with each other.
Civilizations come and go, it’s a universal way of thinking; what can you learn from your culture and your history to reconnect with the world, and we are pretty much in that mindset with Acyl.

ME: do you sometimes get bothered with people having prejudices to you as a band from Algeria as well?
Acyl: Sometimes we see people walk away as soon as we start singing, but often we also see them coming back again and they will start dancing with the other people. What we mainly want to highlight is that we love to see how open minded the entire metal family is. They are always searching for new things and new experiences. In the beginning we had some fears but we soon experienced how open minded everybody was.
For example three years ago we played at the Midgardsblot festival which is a Viking festival, and we were thinking ‘ok, we are going to sing here in Arabic’ some of these same old fears came back, but once you see these people with their Viking clothes dancing on your music, that was really great and we felt very happy seeing that the audience, even if they come from Northern Europe that are expecting Viking stuff, are enjoying your music.

ME: Your band has two different logos, one that looks more like Arabic writing and one that looks very modern, why is this?
Acyl: It’s not that modern actually but it is very very old. The idea was to come up with a logo that represents the different sides of our culture, English, Arabic, Berber, European. What we tried to do is trying to use Tifinagh, which is an original Berber language and alphabet that we made look like a Latin language, but the word is in Arabic. This represent the different cultures about who we are. 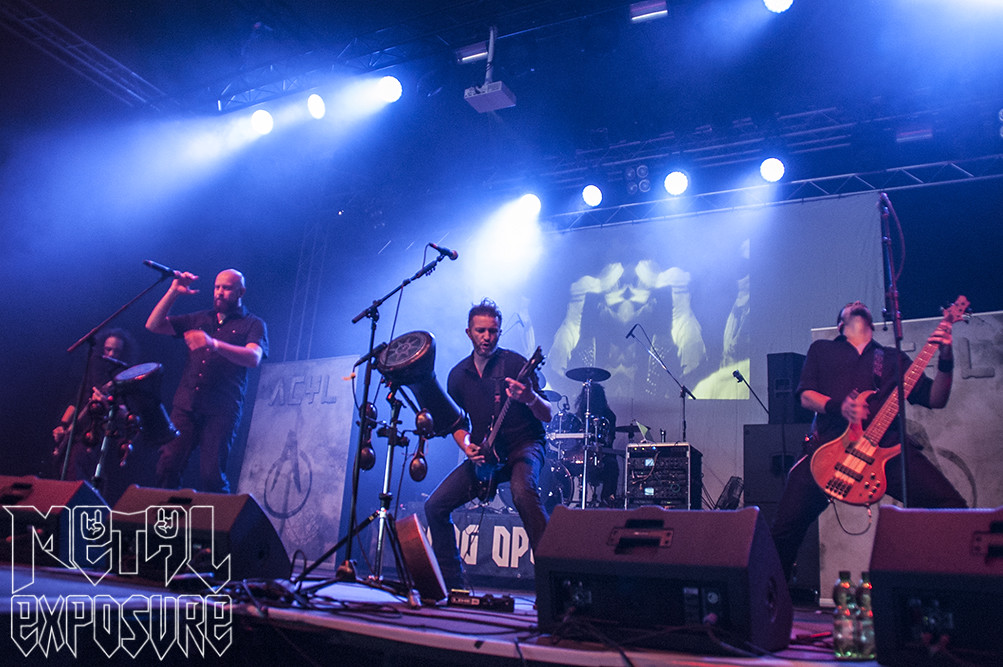 ME: So last question, do you have any Spinal Tap experience or good story to tell us?
Amine: Does it count that I was lost in de desert? For the album Aftermath we went to this city where the desert starts, and we were supposed to meet a musician who plays a lute. I was told by a friend, it was a two hour drive into the Sahara and then you will find this city and once over there, just ask for him because in that city everybody knows everybody.
So I decided to go by myself, without a guide. Instead of two hours, I drove around for about five hours, looking for this fucking city. At one point I finally saw something in the distance that looked like a city, turned out it was the city where I started driving from, five hours earlier.

Amine about Abder: three years ago we were on tour with Dark Tranquility. After a show in Germany we decided to go outside to have a drink. Abder is this very nice person, always positive and he has his way of speaking very intelligent. We were all doing stupid and dumb ass shit, but there was this very beautiful woman in the bar, and of course we were all looking at her.
Abder: Except me, she was looking at me!
Amine: Yes, she was looking at him, and once she started talking to him, he was very nice, like he always is very nice, but said he wasn’t looking for a girl, but just having a good time with friends. But she wanted to stay with him and stayed all the time with him. Then at one point the bar lady come to him and said: you know she’s a hooker right? We were fine with it up till this point, because who are we to judge. Then bar lady said: but she’s not just a hooker, she’s a transsexual hooker.
At that point Abder want to leave as fast as he could and fled to the tour bus!

To read the Midgardsblot report the band talked about, click here
To read about their show on Dong Open Air, where we had this interview, click here