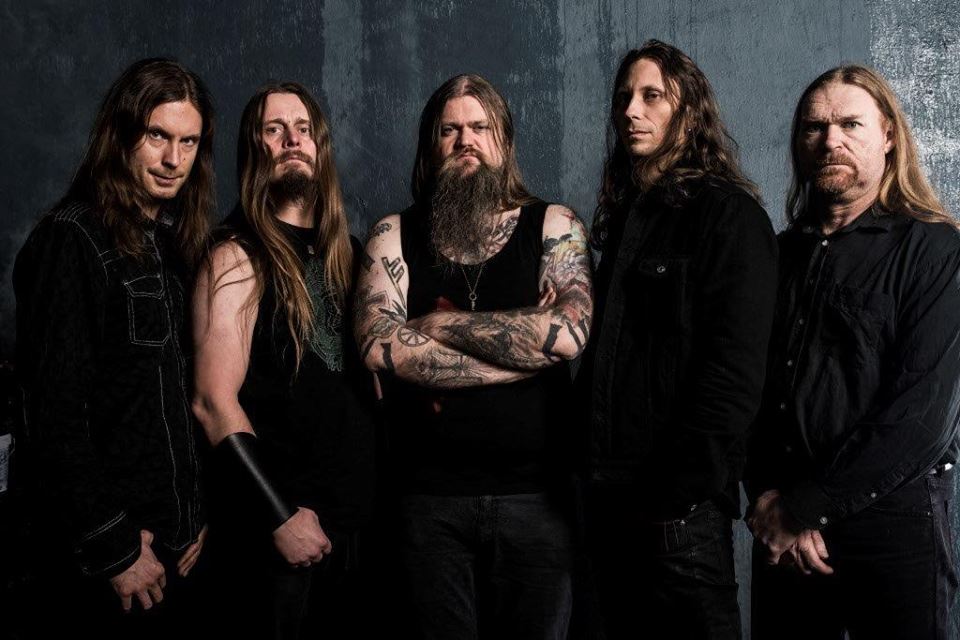 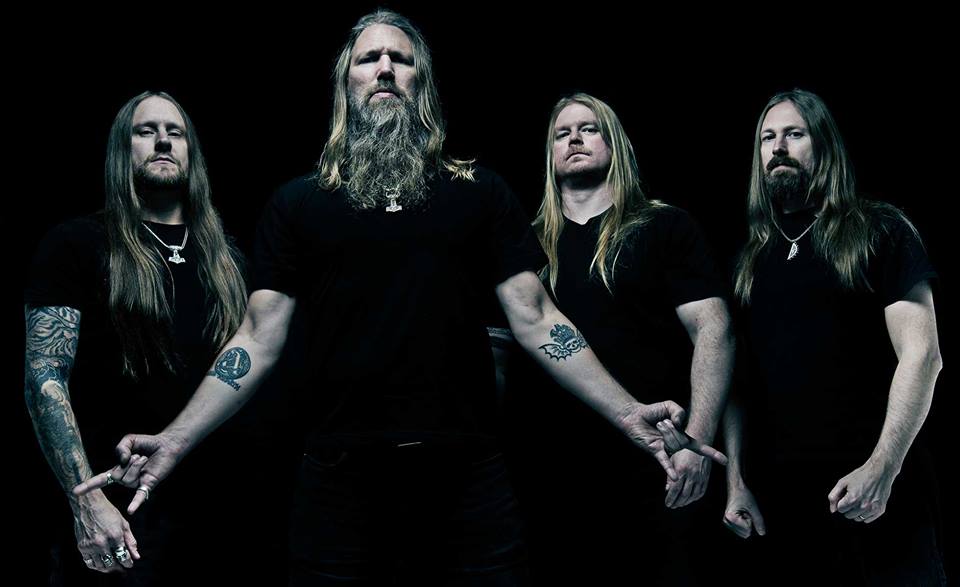 By Laetitia
The Swedish Vikings from Amon Amarth are releasing their new effort in March 2016. Jomsviking will not only mark their tenth studio album, but it will also be the first concept record of the four piece. Metal-Exposure caught up with guitarist Olavi Mikkonen in anticipation of the release.

Jomsviking is your first concept album, based on a story written by your vocalist Johan Hegg. When did he propose this concept to all of you?
“It kind of grew. We played the idea for a while. Usually when an album is done and we start touring, that is the moment we start talking about the next one. It became clear quiet early that we wanted to do something different. Also in terms of song writing. The idea was that we wrote the record like a soundtrack for a movie. Johan had a few ideas for a concept. He worked out the Jomsviking story and we felt it was the right thing to do.” 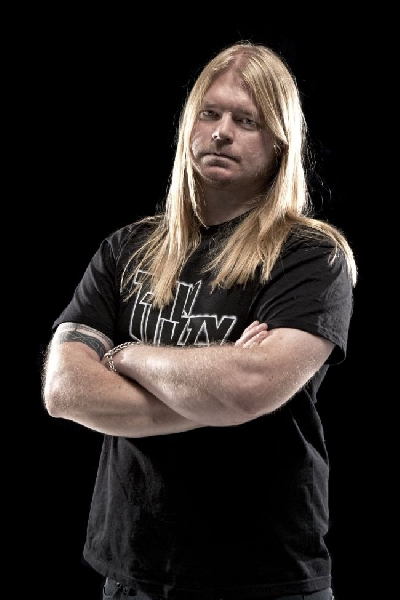 What was it about this tale that made all of you think: this is it?
“I think it was because Johan had so much already. When he told us about the story, he had a story with a beginning and an end. So we had it all covered. The reason why we never did a concept album before was because we didn’t have enough ideas to fill a whole album.”

So the story is a given, what was the approach when transforming it into a record?
“When we got the story, it was huge. It existed of like 150 pages. Johan wrote a summary and from that we made eleven different sections. Those were the songs. Obviously we already had some ideas for the music, so listened to those and connected them to the story. For example, for the song ‘The Way of Vikings’, we had the idea that is sounded like a training, a boot camp. So it became the training song. The same goes for ‘One Thousand Burning Arrows’. It was really epic and sad, so it suited a funeral. We had to compose the other tracks from scratch.”

Which songs did you make from scratch?
“For instance, ‘First Kill’, was the last song we finished. We didn’t have the right ideas for the music until the very, very end. We needed something that actually sounds like a first kill.”

What was the biggest challenge for you in terms of writing a concept album?
“I think that the challenging thing was that it felt like you were doing a job for somebody else. I mean you get the directions: ‘this is what we need’ and you have to perform towards that. Usually when you write songs you do what comes up and you fit lyrics into that. Now we had to make music to already existing lyrics and that was the most challenging thing. If you have a bad ass battle, you need music that sounds like a bad ass battle in riffs and melodies.”

You’ve done both now music first or lyrics first: what suits you best?
“I don’t know. Maybe the Jomsviking way is more exciting, at least for me. I had to work way harder. Maybe when the fans get the album, they won’t hear the difference. Still, I had to work harder and I liked that challenge.”

The Jomvikings were a band of Vikings/ mercenaries with a very military way of life. The tale on the album is a love story, with the Jomvikings saga as the backbone. Aren’t these two elements a bit incompatible?
“Not really. We saw it like a movie. If you look at a movie, there has to be some kind of a plot. The reason why our protagonist becomes a jomsviking is because of this girl. You have to see the whole picture. The love aspect is a small part of it. We tried to create a story about a man. He’s a kid and grows up to be a bad ass warrior and joins the jomsvikings. I mean, it is about life. This is a Viking story but it could be about anyone’s daily life. All of us have been in love at some point.”

Are there any plans to release Johan Hegg’s story in a book form, or in a booklet?
“The idea was to possibly do a graphic novel. That is something that we are still looking into. We wanted to do it for the deluxe version of the new album, but it takes too long to get it done in a good way. We are definitely looking into that and if it makes sense, we might do that in the next couple of years.” 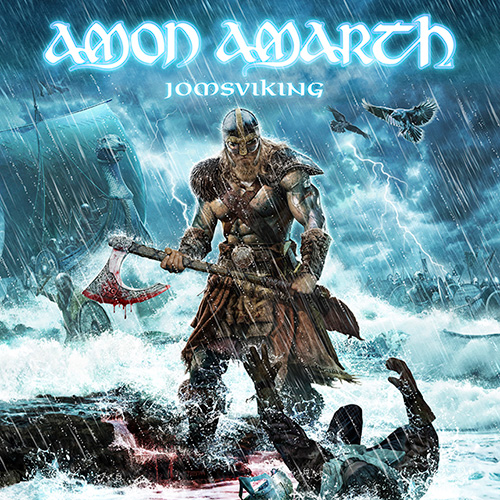 Jomsviking has more of a heavy metal sound. What is the reason behind that?
“Not really. Musically we do what we come up with. We all grew up listening to Maiden and Priest and perhaps that is a circle. We don’t really think too much whether or not a song sounds like heavy metal or death metal. We do what we like and if it sounds good, than we go for it. Still, we have definitely grown towards a more traditional heavy metal sound during the last three or four albums.”

You have a duet with Doro on this record. You could also interpret that as choice for a heavy metal style.
“We needed a female vocalist and the first woman we thought of was Doro. She is the Queen of heavy metal. We didn’t want to go for a symphonic metal vocalist, we felt that this would not fit. It doesn’t really makes sense to have another growler, to have growling lines and more growling lines. It’s better to have something else.”

What is in the cards for Amon Amarth in the coming year?
“We are doing the release show and a bunch of tours. We start with North America, head back to Europe for the summer festivals. We are playing Fortarock for instance. In the fall we will do the main headlining tour and it’s going to be in October/November/December. We are definitely going to play in the Netherlands. It is an amazing package. For us it is the best package that we ever had! I’m super excited! ”

The final question is something completely different: have you ever had any Spinal Tap moments?
“Oh yeah. So many times. Especially the one where you are lost in a backstage, trying to find the venue or the stage. We’ve been to so many places that have so many corridors or doors that you get lost completely while the intro is already rolling. That is actually quite normal. Also, the stage props. You order a huge Thor’s hammer and when you get it, it’s miniature. It happens all the time and the funny thing is that it’s totally accurate and it happens to every band.”