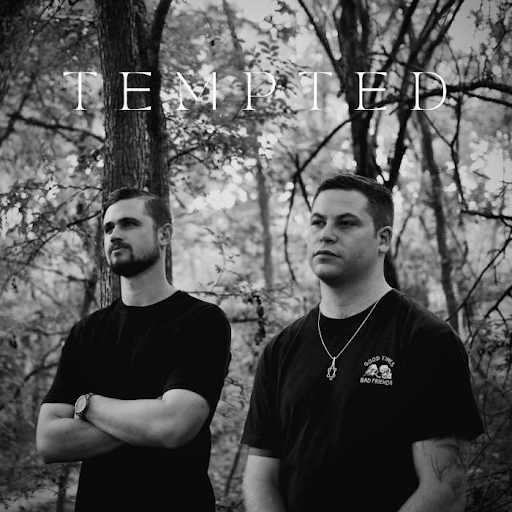 Tempted is a new heavy metal duo from Dallas, Texas in the USA consisting of Josh Mirsky (vocals) and Nick Malan (guitar). They’ve released two singles: “Shape Shift,” out on July 31st, and “Transparent,” which recently came out on October 23rd. They also have a new EP in the works which is scheduled to be released in 2023. We recently spoke with Mirsky and Malan about the EP and their music in general.

For someone who’s never heard of Tempted before, how would you describe the band?
Mirsky: It’s for any prog metal lovers out there, anyone who just wants the next gen new metal … our main goal is to just connect with the fans and bring them the metal that they want!

What makes your music next generation?
Mirsky: Well, I like to think we bring a lot of new aspects  to the table; we’re incorporating a lot of breaks, some djent, and just some neck-snapping metal!

Talk to me about your creative process with your first two singles: “Shape Shift” and “Transparent.”
Malan: Instrumentation wise, I’ve always been the writer of the guitars and drums and bass and stuff like that. I kind of just wing it honestly; there’s always something on my mind when I’m writing these things, but it gets to a point where it just starts flowing after a couple of verses, and then goes from there. And that’s when Josh gets a hold of it and puts his spin on it. He’ll dissect the song, make any necessary changes, and then of course he’s the lyricist, so he writes all the lyrics; the stories. So he goes into more depth with the narrative aspect, while I’m more on the instrumentation side.

So story follows the instrumentation for you, rather than the other way around
Malan: Yeah, exactly.
Mirsky: Yeah, I like to see the canvas of the song [Malan] lays out, and then [we] go over the emotions of the song, and where the song’s heading, and we just kind of make it happen.

You mentioned emotions. What are the emotions associated with your first two songs?
Mirsky: The first song, “Shape Shift,” [is] just kind of a typical sob story: You’re trying to keep up, but you fall just short of expectations. But you gotta keep pushing. You have to push to meet your goals, and you can’t fall short.

How did this project start; where did the name come from?
Malan: We were in a prog metal band called Aeolia. But in that band, I was kind of in the lead guitarist’s shadow the whole time; he did all the writing, and everything; I just kind of learned the music and played it. I didn’t really feel it; it was fun to play, but it wasn’t me. It was all him. So Josh and I eventually decided we should [leave the band, and] make this our own. So over the last couple years we started writing, just kind of bouncing stuff off of each other… and at first, it was just a nonchalant thing; not a big deal, but then more recently, within five, six years, we started to make some really really good material, and we started to think: Wait a second. What are we doing? Why aren’t we releasing this to the public? I don’t mean to toot my own horn or anything, but I really feel like this music’s pretty good, and I think people would enjoy it. So July of this year, we decided to make it public, and we created Tempted. And Josh threw out dozens of dozens of band names… I’ll let [him] take it from here.
Mirsky: So I got the name Tempted, by spamming Nick’s phone with probably around 2000 just random words, random phrases, just randomness. And then eventually Tempted came across his phone and he was like, “This sticks”. And I was like, “Yeah, it does kinda stick.” So we started searching, like “Is this taken?” And we didn’t find anything, to our surprise – and [the name] grew on us. So here we are.

Who are some of your musical inspirations?
Mirsky: I listen to Veil of Maya religiously. Also, growing up I listened to Stained – they aren’t a particularly big influence, but they did contribute to my background and learning how to be a vocalist. But yeah, Veil of Maya, Time Evaluator, Monuments, Andy Cizek … lot of good guys out there that just live rent-free in my mind.

How did you learn music?
Malan: My dad’s a drummer, my brother’s a drummer…music runs in the family, and we always had a drumkit lying around. So I started playing drums, just casually. In about 6th grade, I started playing saxophone, and guitar around the same time – my dad had a really good friend who’s an awesome jazz teacher. He would come around our house about once a week, and kinda give me the rundown, which let me get my hands dirty…  years later, I took classical training for awhile, so I was playing recitals, and learned some sight reading and stuff, and after that, I just took it [myself] from there. I haven’t had any lessons, or formal training since 2008 or something like that; it’s been a long time. But that’s where my musical background started; it’s been in my life for a long time.
Mirsky: I grew up just as the classical shower singer, you know, the cliche… *laughs* Me and Nick went to high school together, and with Aeolia, I was kind of behind the scenes. But they kept going through vocalists left and right, and one day I was just like, “Hey, you guys know, I can sing”, and they all just kinda laughed me off, like “No you can’t…” But I tried out, and passed with flying colours, and it just took off ever since then; I’ve been an avid vocalist, been trying to sing and learn. You can’t learn enough, and I’m still learning.

What can you tell me about the upcoming EP?
Malan: Well, it’s going to consist of the singles we’ve already released, and, well, we haven’t really format we want to go with yet, whether we’re just going to release just a series of singles, and then compile them into an EP and say “Here’s the EP; it’s just all compiled and organized into one little folder”; we’re still trying to figure that out. We’re not really sure what the smartest way to approach this is; as a brand new band, we’re not that familiar with social media and social campaigning and stuff; it’s kind of DIY. We’re learning as we go – and we are learning a lot. It’s still in the works.
[Another one of our inspirations is] Buried Alive, and he’s always releasing singles; he does albums too, but he’s always releasing something … constantly, just to keep people engaged. He never falls off; there’s always content. And we’re trying, but it’s hard, too, because we’re both working full time.

With only two members, how do you get your music to sound like a complete band?
Malan: It’s simpler than it sounds. If you can play guitar, then you can write bass to go along with it. And then drums – with me being a drummer, it’s easy to write drums along with it. Now granted, they’re not real recorded drums; I’m using a drum program to protect all this, but I’ve been doing it for a long time. Back in the Aeolia days, it was always [the guitarist] writing, always him writing, but he let me use his Mac. He had it all set up, he had all the plugins and he let me use his stuff, and it was a really good feeling just to lay some stuff out – throw down a guitar riff, lay some drums on top and then write the bass for it or vice versa… Sometimes the guitar comes first, sometimes the drums come first, [depending on] what kind of mood I’m in.

But I feel like it’s a lot simpler than it [seems]. And then of course Josh will come in, add some stuff here and there; of course the vocals really bring it to life. I think it’s the vocals that make it seem like it’s a 5-piece band, at the end of the day. It’s honestly so much easier to just work with one person than 4 other people…. Granted, we’re an “internet” band, so it’s easy to get away with, but if it comes to a time where we get some traction and can start playing some shows, we will definitely entertain the idea of hiring some people to play some shows, or even expanding the band.

If you could collaborate with anyone, who would it be?
Mirsky: Buried Alive. Charles Caswell is an absolute monster, and if he [sees this] – you know it! They’re putting out bangers left and right, and their musical expertise… is awesome, you know?Malan: They are a next-level metal band; they’re really something else.

Favourite albums in the last couple years?
Malan: Northlane – for sure, that’s a banger, they just released a new EP with their new vocalist that hits pretty hard. I didn’t like it at first, cause y’know, new vocalist – but it’s actually really good.
Mirsky: We can’t forget Volumes: That new Volumes album hits home; that and Northlane’s “Obsidion”.
Malan: There’s also a couple prog metal bands, like Jacob Hounslow, Steven Toronto, they [release] a couple EPs every six months to a year. They’re a huge influence on [our] prog metal side; those guys can shred. I wish I could say I could shred like those guys, but they are phenomenal. We’re learning a lot from [them]