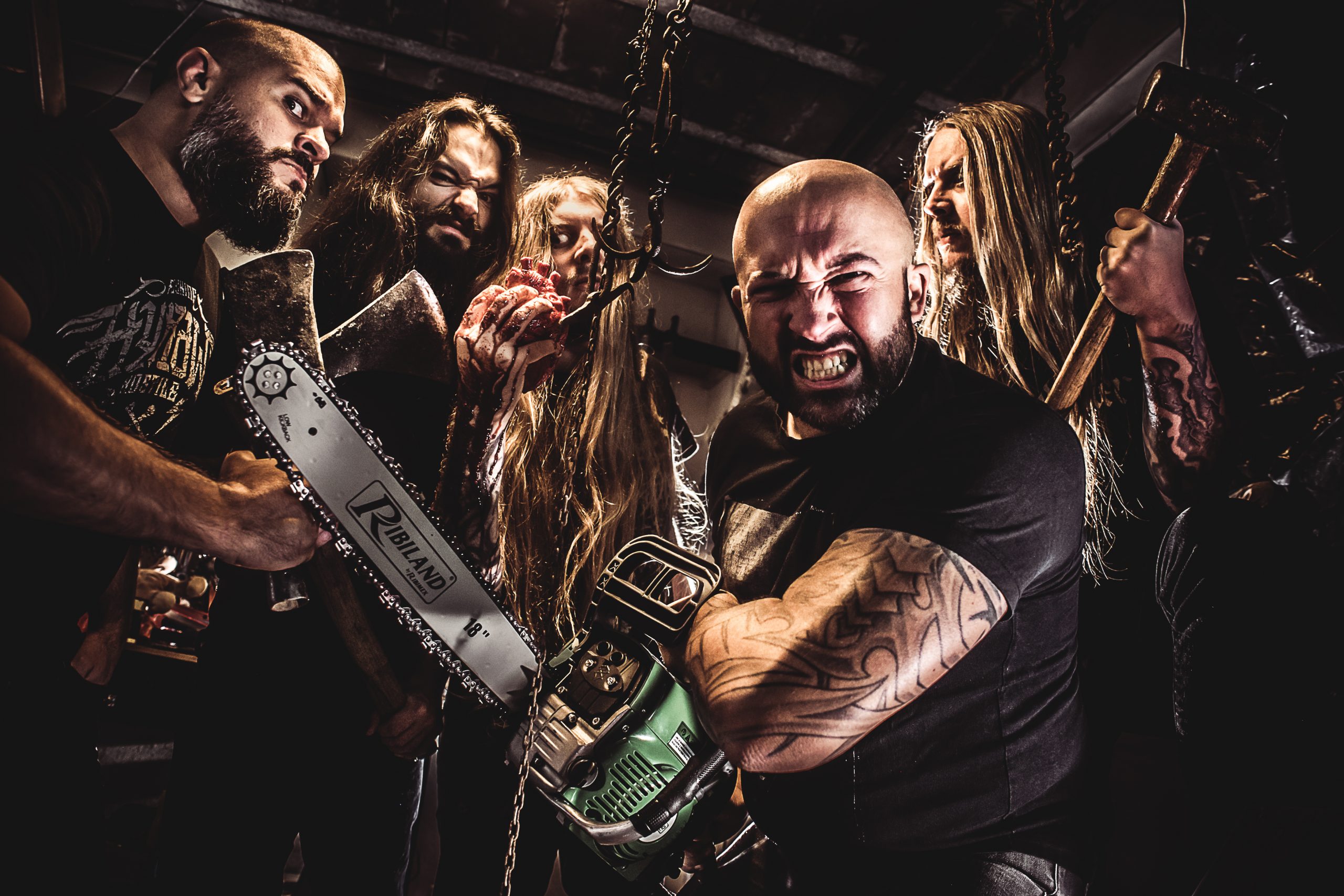 Tony from Metal-exposure: Hi Guys, I’m glad that you are able to take the time and have an interview with us at Metal Exposure.
Thank you, man! My pleasure!

Tony: Your latest album “ Obscene Repressed” was released in April. Can you tell us something about how this album came to be ?
Julien: I think this album is in the perfect Benighted way of playing extreme metal! “Obscene Repressed” is the most intense act we ever made, with very catchy choruses, neck-breaking parts and this delicious brutality that made our reputation towards the years! It has also his bunch of surprising parts, also very dark atmospheres according to the creepy concept of this new opus. I would say that it’s our usual recipe that we always try to improve! That’s brutality mixed with groovy parts and more creepy ones to make it always efficient and some unexpected parts which make the listener wondering what’s going on! Ah ah! We also work a lot on the choruses to be easily remindable so you already know which one is your favorite song after one listening! Also, we brought back more of this hardcore influence that we missed a bit on “Necrobreed”. “Obscene Repressed” is definitely the most intense album we released ever! And the story behind the lyrics is definitely the sickest we ever offered!

Tony: In preparation for the release and for the festival season you were on the line-up for the Hellfest Warm Up party. What was the feeling when it had to be cancelled ?
Julien: We are so disappointed and frustrated as everything was promised to be so great! Pre-sales were going crazy with more than 1000 for some gigs… There is no word to tell how sad I was when it got all cancelled… Also because at this period, I have been helping working in Covid department (I’m usually a nurse in psychiatry for the living) and caught this fucking virus… So, instead of playing crazy shows for the release of our new album, I was super sick in bed with 40 degrees fever.

Tony: Did the current situation had any influence on the record sales ?
Julien: Of course, because the album couldn’t be found in stores, but fortunately we have so amazing and faithful fans that it went fantastic anyway! And we can’t wait to play for them on stage as soon as possible!

Tony: Did you consider doing a live stream of a show for the people at home ?
Julien: No, Benighted are definitely not this kind of bands… Our energy must be experienced live.

Tony: What are your tour plans after the virus is over?
Julien: We planned a European Tour for October, hoping that things would be better until there. So we wait and see. I cross my fingers hard for that because we are craving for going back on stage and set fire with the crowd!

Tony: You have been playing in lots of countries all over the world, what is your favorite country and festival that you played on?
Julien: I would say Czech Republic because we have the craziest fans there and for example our last show at Obscene Extreme Festival in 2018 was one of the most amazing in my life! Stage-diving, circle-pits, brutal moshpits, unbelievable costumes everywhere… This festival is definitely the most insane in the whole world! I am looking forward to play Brutal Assault in CZ next year so much !!!

Tony: And of course what is the craziest thing that ever happened on tour ?
Julien: What comes to my mind is this concert we played in Saigon (Vietnam) in 2017! It was a sold-out show and when we arrived, we realized that the stage was actually… the floor! So, we were totally surrounded by the crowd and when it started, people got totally crazy, moshing and stage-diving from everywhere! We received people on the head constantly, it was absolute chaos and such a great memory! The floor was super slippery with beer and sweat, people were falling, yelling, I rarely experienced such a crazy show and will never forget it! The funny thing was also that we could actually see the images of that afterwards as there were journalists and that they made a documentary for Vietnamese TV news! And few days ago, at an open-air festival in Guwahati, I got electrocuted on stage at the very last song! Ah ah! This Asian tour was super cool but not that safe!

Tony: Is there anything you would like to say to your fans ?
Julien: Thank you all for your unconditional support along the years! We miss you so much and are so impatient to tour again and party with you everywhere with our new baby “Obscene Repressed”! Stay sick, my friends !!!

Tony: Finally I want to thank you guys for your time for doing this interview.
Julien: Thank you so much!