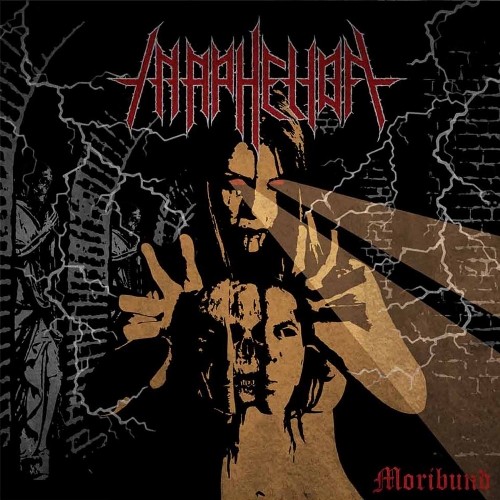 Unholy Hell! I have never expected that In Aphelion’s  “Moribund” was such sheer pleasure to listen to! It is almost impossible not to bang your head or use one of your limbs to tap along when experiencing the ten sublime tracks on this album. Although this album is already released a few months ago I decided to give this album more spotlight by putting a review on this beloved E-zine. Why? Because the bowels of hell spawned another dark piece of art worth your unholy attention!

In Aphelion is the project of Necrophobic’s guitarist Sebastian Ramstedt.  Aided by his comrade  Johan Bergeback (also Necrophobic), Marco Prij (Cryptosis) on drums and Dennis Holm (Avslut) you can almost regard this is an international all-star band.

Aggressive, yet melodic, tunes are masterfully crafted resulting in catchy and accessible yet dark, haunting music which is highly addictive. The drums of Prij outclass everyone and the ice cold guitar riffs of the other three gents are also a force to be reckoned with while the throat of Ramstedt manage to scream and summon all demons from hell.

Of course you can hear the footprint of Necrophobic on this album. But In Aphelion isn’t a clone. With clever use of ingredients such as black metal, (think Dissection), thrash metal and a pinch of heavy metal these lads manage to usurp the listener with a few surprises.

The album starts in an old school manner with a keyboard intro on “World Serpent (Devourer of dreams)” before this song bursts into flames with catchy guitar and sublime drum parts.  “Draugr” seems to bear more thrash elements and surprises me with its epic heavy metal guitar solo in the end while “Let the Beast run Wild” does credit to its name by being a fierce, bold and melodic punch in your face. The acoustic intro on “Luciferian Age” is merely an interlude of the protrusive character of this song and contains some harsh, ice cold riffs.

“This Night Seems Endless” shows some majestic solos in the beginning and in the end of this song. While not being full throttle the song oozes with darkness and brooding atmosphere.  Especially the chanting gives it an epic touch proving that Ramstedt is, besides being an excellent guitar player, also a very diverse and powerful vocalist.

“Moribund” has a more (anti-)religious character and the riffs are so good that my adrenaline starts pumpin’ at two hundred percent. “The Origin” again has some excellent solos and “Sorrow, Fire and Hate” shows the more aggressive side of this quartet. The epic “Requiem” concludes this album in fitting manner with its great riffs, melodies and epic ending and is chilling to the bone.

Is there anything to complain on this album? Other than the fact that the album cover is hideous and does not fit with the atmosphere presented and that the bass could have had a slightly more prominent role in the mix the answer is simply no. The production is excellent, the songs are technically impressive yet catchy without forgetting the right atmosphere. It really shows that all the musicians are in top form. In a few days this album hasn’t left my digital player and that can be regarded as a big compliment.  Can’t wait to see these guys perform live. Please support In Aphelion by getting your copy right now!