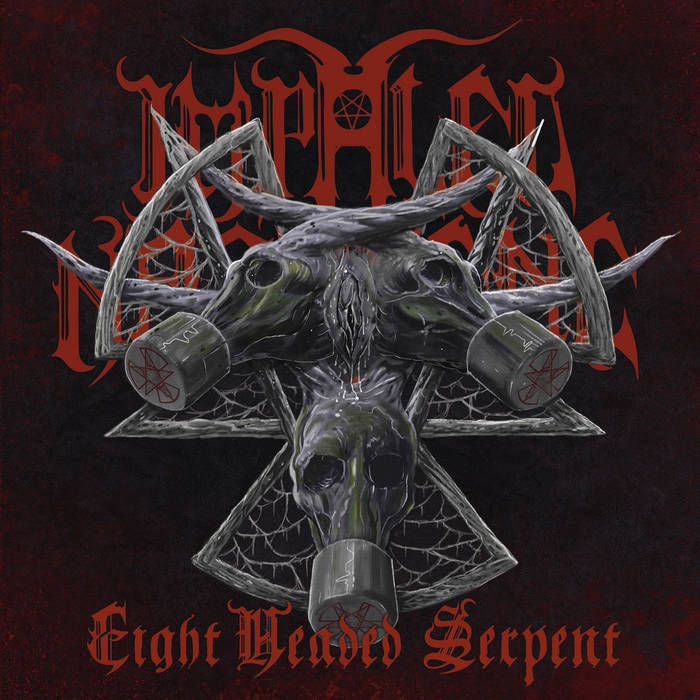 I do not want to give too much spoilers about this album but when having such an outrageous hilarious sample in the first track you score points. That said you probably already know Impaled Nazarene. If not you must be living under a rock the last 30 years or simply not interested in this kind of music. Better leave this review alone then.

I have seem to have missed a few albums from this band but these Finnish bastards are of constant value within the Extreme Metal scene, and with their latest spawn “Eight Headed Serpent” is a blasphemous concoction of Black Metal, Punk and Hardcore is being presented. Straight and in your face were the throat of vocalist Sluti666 is maniacal just the way we like it and still driven by pure hell after all these years. But don’t forget the other musicians because Repe, Arc and Tomi really can play! Although the set-up of songs are (relatively) simple, the pure evil force that is presented blows like a furious wind in your eardrums.

After the hilarious intro, “Goat of Mendes” bursts lose. You might know this song because this is/was also a single presented a while back, and this track is a perfect blueprint and impression for “Eight Headed Serpent”: its fast, it’s furious and it has the venom of 10.000 demons in it, and I like it; Not just like it: my inner demon loves it!

Although the songs are quite fast, the slower tracks, such as ‘Metastasizing and Changing Threat’, have a sinister undertone, which takes over making it a worthwhile and intriguing breather. Just listen to the howls of Slutti on “Unholy Necromancy”…this guy know either what he’s doing or has been taken over by a ferocious demon. The only exception regarding type of tracks is the Doomish “Foucault Pendulum”. It is slow, threatening and creates the right atmosphere to end this really enjoyable album.

Impaled Nazarene does not present anything knew. Does not matter because this band does its own thing and keep on doing so, and I am happy that this is the case. Their witty yet furious music is something not to be missed. If you are a fan, go ahead “Eight Headed Serpent” will not disappoint. If you don’t like their style: leave it the f#ck alone. Let’s exorcise the oral sex demon on this album, oops!! spoiler…, and hope that Slutti666 and co keep on going strong for another 2 decades. Great album!