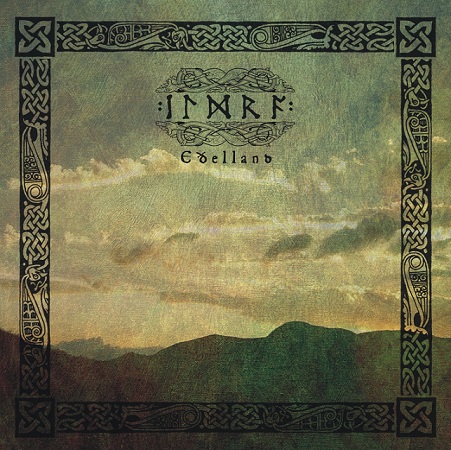 It’s been a while since I ventured into the dark, cluttered depths of my inbox, in search of new music to hear and review. Among all the music gathering dust, my eye recently fell upon the English black/pagan metal band Ildra (it’s not really known if the band is active anymore), who released its first full length Eðelland way back in 2011. Recently, record label Heidens Hart has just re-released this little, unknown gem.

Ildra might not set itself apart in terms of uniqueness: comparisons to bands as Graveland, Oakenshield, a bit of Forefather, and even a bit of Bathory are not far fetched. What the one-man band has managed to do is mix pagan/black and folk with such flawless timing, that Eðelland is one of the easier and pleasant records in this genre that I’ve heard in some time (not counting Ereb Altor’s Ulfven).

The album starts with ‘Sweorda Ecgum’, an acoustic intro. You’ll hear this type of songs more often on the record and they are far from bothersome. Built around acoustic guitar melodies and driven by an authentic, upbeat drum, these instrumental tunes contribute to creating an almost medieval atmosphere and also make the transition between the amplified songs and the intermezzo’s.

The first regular song is ‘Rice Æfter Oðrum’, again with and upbeat rhythm section and the kind of pummeling fills you love to hear in black metal (just admit it). The riffs vary between the gallop-y kind and melodies. ‘Nu is se Dæg Cumen‘, breaks the pattern of the album a little. You’re greeted with more straightforward riffs and heavier growls, pushing the melody to the background. With spoken word dominating the track, and halfway through a combination of speedy acoustic chords and a heavy line created by the amplified guitars, it is definitely one of the more intriguing tunes, aimed at telling a story.

It’s a bit of a repetition of what was written above, but the transition between the sections of the tracks are smoothly done, making Eðelland a complete album. Nearly 50 minutes down the line, you’ll wonder it the record has already finished, just to start it again.

There are a few things that you could point out as weaknesses of the record. The recording quality is not 100 percent clean, yet I can’t say it really is an issue. As enjoyable as Eðelland is, during the first spins none of the tracks will really pop out right away. The one and only cure? Listen to it some more and you’ll be able to discover the distinct characteristics of the songs. As for originality, this is one of those cases where the pleasure of listening simply beats the need to write something completely new and boundary pushing (and often trippy).

For any fans of Forefather, Thyrfing, Saor, Winterfylleth and other pagan/black metal bands, I can say, you won’t regret giving this a try.