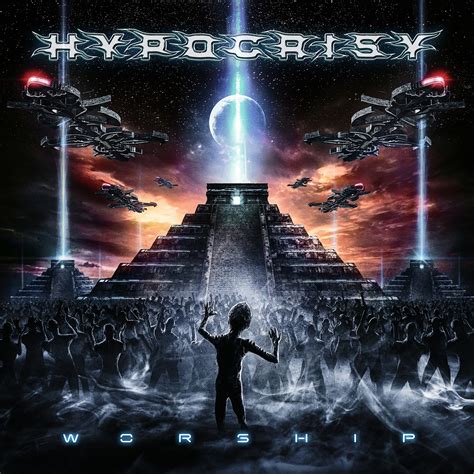 Peter Tägtgren and his co-conspirators are back! With “Worship”, their fourteenth album in a lifespan of over thirty years, they destroy anything in their path. The band sounds familiar but manages to have a few surprises up its sleeve creating an exhilarating ride with its eleven tracks. Of course topics as extra-terrestrial life, conspiracy theories and social criticism are present. Even Covid is a topic which is touched. But besides this it is the music which counts, and Hypocrisy delivers, as always!

With “Chemical Whore”, Hypocrisy manages to create a superb opener where harsh Death Metal riffs and melody collide. “Greedy Bastards”, “Dead World” has some really heavy yet catchy riffs and shows that Horgh still can play drums like hell.
With “We’re the Walking Dead” aided with atmospheric synth/keyboard they present a finger lickin’ good breather. Wow! this song is so fuckin’ cool that it reaches epic proportions; and listen to the keyboards in the beginning of “Bug in the Net”: goosebumps over my whole body. “Gods Of The Underground” has some really groovy riffs and closing/title-track “Worship” sees to it that the album is closed in ravenous style.

On “Worship” Hypocrisy does what it should do, and with this I mean creating great yet very listenable tracks which show real craftsmanship. This album is really fun to listen to and is as brutal as it sounds fresh. Aided with a tight, spot-on yet very warm production were nothing is left to chance they managed to release one of the most anticipated releases of 2021.This is an absolute must have for fans of the extreme metal genre.

A personal note from me: extra kudos to Peter Tägtgren. With running the Abyss studios and several other projects such as Pain and Lindemann this guy is a living legend leaving a legacy as no other. Let’s hope he manages to keep continuing his work for a couple of more decades and gets more credit for his work. He certainly deserves it! And with its recent spawn he and his band mates prove that the fire is still burning strong in Hypocrisy, scorning everything in its way. Excellent stuff!

Track-list:
1. Worship
2. Chemical Whore
3. Greedy Bastards
4. Dead World
5. We’re The Walking Dead
6. Brotherhood Of The Serpent
7. Children Of The Gray
8. Another Day
9. They Will Arrive
10. Bug In The Net
11. Gods Of The Underground