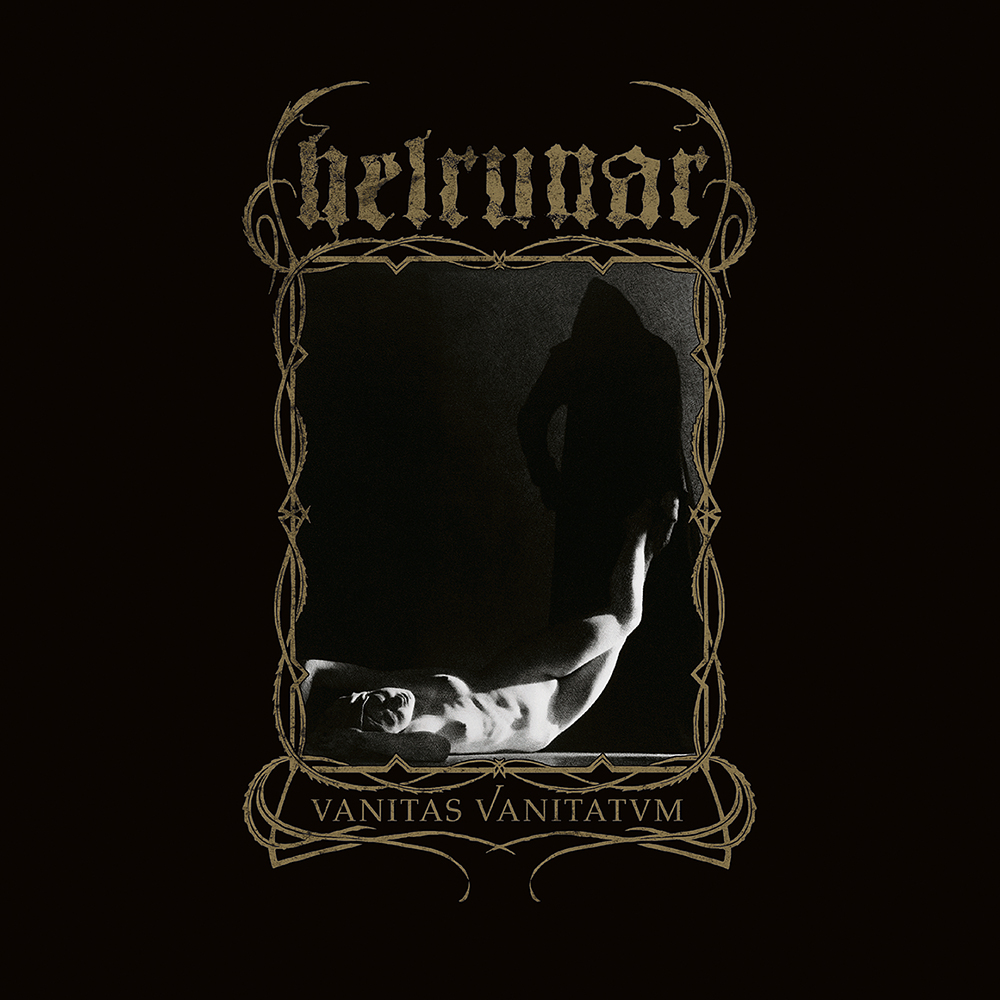 Everything is in vain. Your life, your job, the things you do, the food you eat and the many poisons you drink. It serves no purpose except killing time, before time kills you. Well, most of us know that much already. What you might be new to you though, is Helrunar’s 7th album, Vanitas Vanitvm. And boy, did I enjoy killing time with it!

Helrunar yours truly counts among the more elite black metal acts of Germany. Elite in both lyrical sense as well as song compositions. As often with music, it took a bit of time before this band really struck me.

Helrunar has two permanent members (Skald Draugir, vocals) and Alsvartr (drums, guitar, bass). My first encounter with them at Prophecy Fest 2016 did not leave a very deep impression, although that had to do mostly with sound issues. The second encounter at Ragnarök 2017 , although much better in sound, was somewhat distracted by some vain and slightly poisonous drinks (and the affected state that follows afterwards). Studio albums never really caught on (editorial self-note: unjustly so, they are awesome!) as the groove was perhaps a bit beyond me. Therefore, having Vanitas Vanitvm (28th of September 2018, Prophecy Productions/Lupus Lounge) landing on my desk was a perfect excuse to try Helrunar once more.

The first spin literally hooked me (instantly) to the cynical, spiteful and arrogant, distanced theme this album narrates. The sad, opening violin dirge of ‘Es ist ein sterbend Licht’ betrays a feeling of despair and hopelessness. Not on a personal or emotional level, but rather on an all encompassing one. The opening riffs on Saturnus I can only describe as filthy yet staunch – love the way Helrunar tuned that specific sound. Reading through the lyrics, one gathers a distinct cynical metaphor present; that of the Roman empire’s decline through decadent life. A decadent life of feasting and blind power, ultimately leading to ignorance and apathy.

Aside from meanings and metaphors, the poetic metre of Saturnus combined with the music is brilliant, something that holds for the complete album. The vocals are loaded with enough aggression and cynicism (bordering on arrogance) to keep children indoors, lest they might lose faith in the world.

The guitars are twisting melodic when not supporting the vocals on one of my favourites, Blutmond. The song perhaps ridicules the (Christian) remorse, sacrifice and ultimately the redemption that will never come. A real master piece for a slow build-up of atmosphere in both lyrics and music, with the song ending in fast pummeling drums and fast riffing.

Another brilliantly black and filthy piece – this time both in lyrics and riffing – is ‘Da brachen aus böse Blattern, am Menschen und am Vieh’, The song deals with both the rather disgusting symptoms of grey plague and its likewise disgusting effect on humans on a sociological scale. True to the subject, the guitars use stretched out melodies that theme the music in a requiem. Riff wise, the song progresses into a war march for the unstoppable legions of the dead – coming for you as well.

Vanitas Vanitvm (vanity of vanities) reflects modern and historical human life though the premise that everything is in vain. The many different lyrical sub-themes are seamlessly narrated into the music. The music is fitting, filthy and fast. The compositions also offer minimalist and elegant sections however, when called for. A brilliant example of this is Nachzehrer (a mythical, vampire like creature from the depths of Northern Germanic folklore), with some brilliant slow drumming during the spoken lyrics and lamenting guitar solo at 05:25.

The closing and magnum opus ‘Necropolis’ opens with a rather subdued half distorted guitar, leading the way for the up-beat if marching drumming. The all-encompassing stupidity and uselessness of humans is, besides the lyrics, emphasized by the rueful solo midway through the song. The sad guitar symphony that follows to fade out to the dissonant violin(s) at the end, serves well to leave the last message of believing lies and buying useless items (a common dead mind?) with some impact:

(Off to one side, an old man stood watching the scene in deep, sombre thought. “How right you are,” he grimly said. “You have made a good bargain. For the dead don’t need anything.”)

Helrunar’s 7th pleasantly killed many hours the last two weeks, as it hardly left my daily playlist since the first listen. An album of great compositional and lyrical quality, both in poetic and thematic sense. Vanitas Vanitum hooked me to their filthy riffing and elegant compositions. The album made the lasting impression this elite group deserves.