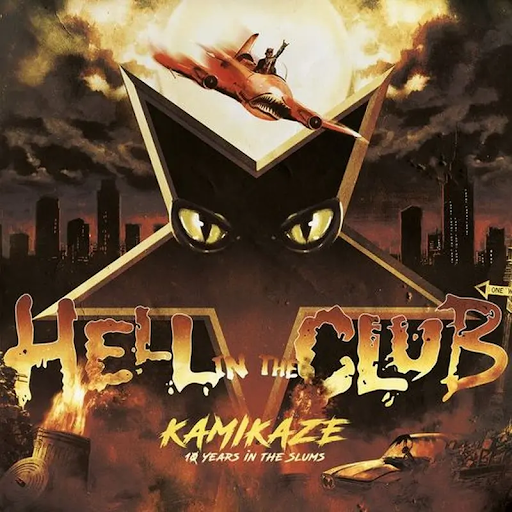 Italian hard rock/heavy metal band Hell in the Club is set to release a new EP on March 18. The EP, titled “Kamikaze – 10 Years in the Slums” is a celebration of the 10-year anniversary of the release of their first album: “Let the Games Begin,” according to an interview with Rock ‘N’ Load.  Since “Let the Games Begin”  (out in 2001), the band has released four studio albums: “Devil on my Shoulder” (2014), “Shadow of the Monster” (2016), “See You on the Dark Side” (2017), and most recently “Hell of Fame” (2020), which was hailed by a Metal Nation review as “another highly enjoyable, addictively vintage sleaze rock record”. The band is fronted by Davide “Damna” Moras, whom fans may recognize from the folk power metal band Elvenking.

The EP itself contains 5 songs: two new releases, two cover songs, and a re-release of one of the songs on their debut album. Given the inspiration of this EP, one might expect the full force of some classic 80s hair metal, like some of the material in the band’s previous albums – however, this Hell in the Club album actually contains a surprisingly diverse musical palette. The two new releases exude bombastic energy that remind me more of Halestorm’s fiery post-grunge aesthetic – particularly their earlier work – than anything. It’s good time music, really exemplary pieces of classic hard rock on the border of heavy metal, and while I wouldn’t necessarily sit down and analyze their lyrics, I’d certainly put the EP on while drinking. I additionally enjoyed the occasional small guttural touches in the vocals, and wish there would have been more of these. My other criticism lies in the length-to-substance ratio of their songs, which would benefit, in my opinion, from being trimmed to about 75-80% of the length.

The two covers are “He’s Back (The Man in the Mask)” by Alice Cooper and “Chainsaw Charlie (Murders in the New Morgue” by W.A.S.P., and both of these sport a decidedly different aesthetic from the new releases. “He’s Back (The Man in the Mask)”  takes a slightly quicker, more aggressive approach to the song than the original, and you can definitely hear the classic 80s aesthetic coming through on this one. It’s a touch more metal and a touch less goth than the original, and while I enjoy both the original and the cover, they definitely scratch different musical itches.

The re-release, “In Your Eyes (2021),” takes us in a completely different direction once again: it’s a slower number, and honestly probably my least favorite off of the EP. This track in particular is too long for the amount of substance you get from it, and there are some moments when the acoustic guitar actually seems vaguely reminiscent of a country music piece – which while perhaps appealing to some, is not what I generally look for on a classic hard rock album.

Overall it’s not a bad EP, and the new songs may very well make it onto my Spotify shuffle, but there’s nothing particularly memorable about it either. It feels like it had one job: to entertain – which it succeeds in accomplishing, nothing more, nothing less. In any case, Hell in the Club gives us a good time and does justice to the bands it covers, and I am interested to see where they will go from here in the future.