If you have any familiarity with the folk metal genre, you will know Heidevolk. The Dutch band has been active in the scene for roughly 16 years and conquered its rightful place on countless tour posters and festival line-ups. Although the band’s own lineup has changed over the years, two pillars – drummer Joost and bass player Rowan – have remained standing, as is well symbolized on the following official band photo: 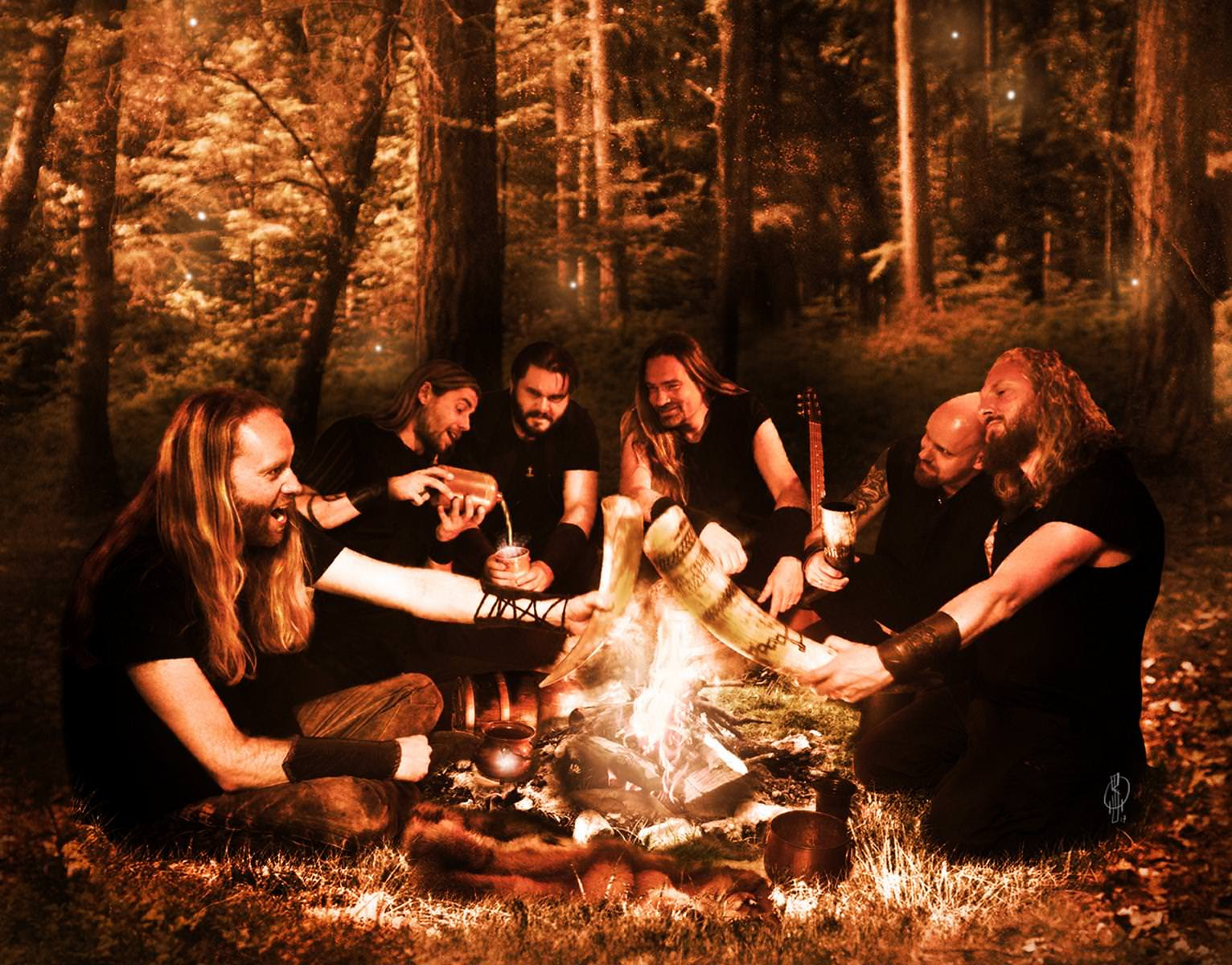 The changes in line-up have had their effect on the music, as should be expected from such an individual and unique sounding band – however, the main sound has always remained the same and the musicians are always excellent. Personally I have always loved the band’s music and I appreciate their albums for what they are in all of their differences. Therefore I was very curious about their seventh full length album, which is to be released on January 12th. It is titled “Vuur van Verzet”, which is a very Heidevolk-y name and promises a lot of energy in the typical Heidevolk style. Of course it will also be possible to enjoy some songs of the new album during Heidevolk’s upcoming tour with Korpiklaani and Arkona.

The albums starts with the track Ontwaakt – straight away plunging the listener into the steady, slightly pompous and very melodic Heidevolk-sound. There is an inspiring music video to this song, with some very good artwork. The video is a pleasure to watch and to listen to. Singers Jacco and Lars combine their voices harmoniously and sing about the downfall of the Roman Empire whilst drummer Joost pounds a steady rhythm and Koen and Kevin make their guitars growl, ready to devour any Romans not getting out of their way fast enough. A promising start!

Second track A Wolf in my Heart is going in a slightly more poppy direction. It reminded me a bit of the song Beest bij Nacht (Beast at night) of the album “Uit Oude Grond”. At first it takes getting used to the English lyrics – especially for Dutch people the Dutch accent will always give a twinge of embarrassment, but I guess in this case it gives it some charm. In my opinion, it’s not one of the master pieces of the album, but nonetheless, in the end, you find yourself bobbing your head and singing along with the song as it is quite catchy and an excellent song for the shows. The violins are elegant, the drums straightforward and the guitars nice and heavy. Woof!

On to the next track: Onverzetbaar (Steadfast). The track sounds as steadfast as the title – steady and uncompromising. Vocals are a bit monotonous, but otherwise, there are some nice changes of pace to keep the song interesting. One of my favourites of the album.

The next track, Yngwaz Zonen offers a very atmospheric song in a bit of a fisherman’s choir style. All the voices of the band are combined, singing to the rhythm of the pulling of oars with one single drum giving the pace… We can imagine the men on a ship on their way to distant shores – the listener is allowed to be a passenger, and soon singing along.

Hengist and Horsa return! Remember them, from Heidevolk’s first album “De Strijdlust is geboren”? In Britannia the infamous brothers make their return and provide us with a well-paced track titled Britannia. The guitars are nice and solid in the track, certain to make some heads bob, either at home or at the show. The vocals are layered and pleasant and the guitar/violin solo gives it a nice extra. One of the tracks on the album with the most variety.

If you ask the vocalist Alan Averill from Primordial to star on your album, you know beforehand that there is a risk of him stealing the show. And so he does, in “The Alliance”, a song about a fragile alliance of Britons and Germanics – Alan’s passionate vocals are in stark contrast to the sober and somewhat monotonous vocals of Lars and Jacco. “We thought our salvation emerged from the channel’s violent waves. Yet we invited our doom, for you intended to stay”, he sings. Alan is always so good at singing sad stuff in his almost tormented voice. In this song, Germanic sell-swords are the bad guys, as they aid the Britons in their fight against the Romans, but afterwards refuse to leave and claim the land as their own. Fui. The lovely violin adds some extra depth and drama to the song, which I think I might be calling my favourite song of the album. It may even have given me some goose bumps, but don’t tell!

Tiwaz starts off slow and composed and continues in a sort of humppa pace which is alternated with nice choruses – a typical Heidevolk combination which has worked well in the past and still does the trick for a catchy track. There is some nice lines for the violin and the drums are very enjoyable.
Also enjoyable is the next track, Het Oneindige Woud. It is a charming (obligatory) instrumental track, intended to give the feeling of the endless woods that covered the land 2000 years ago. Heidevolk always delivers excellent instrumental tracks, which, by the way, reminds me that I wanted to mention the absolute need for an acoustic album. Guys?

Next up is Gugnir, a slightly bombastic track, including their full repertoire of instruments and some decent heavy guitars. The song is another ode to the wisdom of Wodan and tells of how he learned the secrets of the runes. Although Wodan’s wisdom is quite infinite, I think we don’t need an infinite amount of songs about it, however nice…

Woedend is about berserker – you know, those guys who would go completely crazy in battle and fought with a rage that would put your girlfriend to shame. However, if you expect the song to sound like the musicians went berserk as well, you are mistaken..This track is, ironically, lacking temperament.

The album “Vuur van Verzet” reaches an end with Het Juk der Tijd (The Burden of Time) which offers a nice closing track. The song is pleasant to listen to and the lyrics give food for thought – which is something that I consider an important part of Heidevolk’s concept.

Long story short: With their new album, Heidevolk pretty much delivers what their reputation promises. Some features like the guest vocals by Averill are nice additions and add some diversity to Heidevolk’s sound. The vocals are overall great and Lars and Jacco do a great job, however, they could be a bit more varied. Some songs really ache for some good old grunting to add a bit of rawness to the album, as it is very polished as it is. The wolf should show its teeth at the audience a bit more, but maybe we will get that at the live shows, which are always worthwhile.