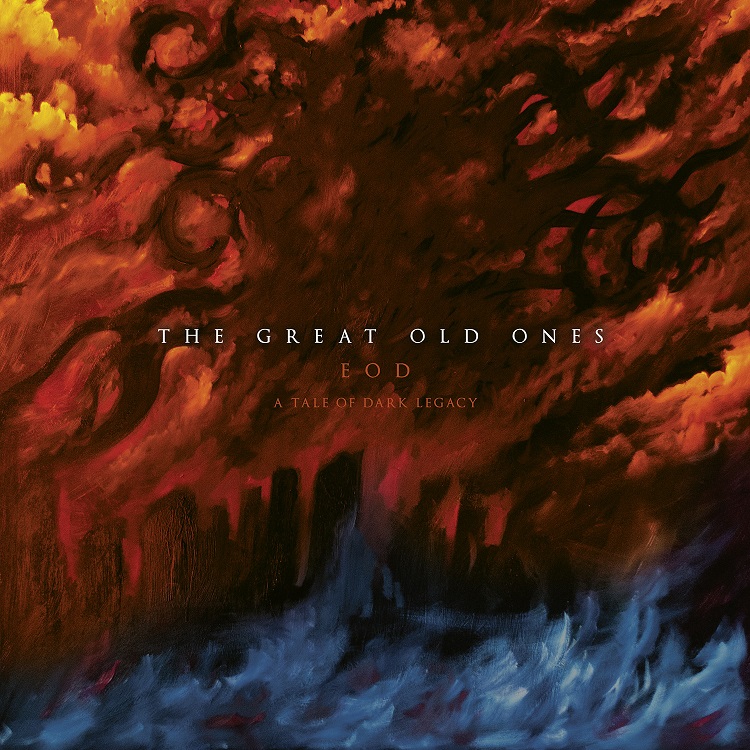 By Laetitia
Novels and metal have always gone hand in hand, especially those of dark, intruiging tales. Tolkien’s legacy inspired dozens of bands, some outstanding (like Summoning), others to a cheap elf-in-the-woods trick. It’s no surprise that the unsettling, disturbing stories of classic horror author H.P. Lovecraft also belong to the (numerous) sources of inspiration of metal bands. The French atmospheric black metal band The Great Old Ones belong to the kind that has excelled in bringing Lovecraft’s tales to life with soundscapes, most recently demonstrated on EOD: A Tale of Dark Legacy.

The Great Old Ones refer to the ancient (malignant) deities who in Lovecraft’s stories who once presided on the earth as gods or rulers. The famed Cthulhu is one of them. The band’s third record is based on Lovecraft’s 1931 novel The Shadow Over Innsmouth. EOD stands for Esoteric Order of Dagon, a (fictional) cult who worship the ‘Deep Ones’, ocean-dwelling creatures, who on their part, without giving away too much about the novel, turned the town of Innsmouth, Massachussets into a place that only exists in your most ominous nightmares

The musical narration starts with the short intro, ‘Searching for R Olmstead’, that within 20 seconds creates an unsettling atmosphere with buzzing and the protagonists deep voice telling that he is ‘finally in Innsmouth’. The intro rips open into the fiery ‘The Shadow Over Innsmouth’, a straightforward black metal tune that is layered with echoing vocals, bleak guitars and eerie melodics (of which the use has significantly increased in comparison to Tekeli-li (2014)) that all contribute to creating a nightmarish vibe on the first track.

On ‘The Ritual’ the drums are highlighted with a ritualistic rhythm (to be fair, the overall pounding drums, blast beats and fills are impressive) and lures you into a doomy atmosphere, a breather you might say, until the tides of black metal wash over the song again. The intermezzo ‘Wanderings’, with the very effective narration of ‘My soul wanders into nothingness’, leads up to ‘In Screams and Flames’. As the title suggests, another tremolo assault that later on manages to drown every inch of hope from you with the guttural cries from the deep.

‘Mare Infinitum’ concludes the feverish dream (or does it?) with a drenching opening of a sinister cello and a tempo that would make any sludge band proud. The song captures the spirit of the entire record with more icy guitars, a chaos of vocals, black metal riffage and also strengthens the album with its dynamics. As the track fades out with a choir and eerie guitars one can only let the vastness of the record sink in for a while.

A plus needs to be added for the production, which is clearer then on previous albums, yet murky enough to keep the listener shrouded in mystery. The only downside to this record that it seems to damn short each time you hear it.

To sum it up, what makes EOD stronger than its predecessors is that it manages to capture and keep that occult, fictional atmosphere to a degree that allows your mind to twist along with the music and therefore enriching TGOO’s brand of black metal. It’s a massive album that will drown the listener in the soundscapes and down towards the place Deep Ones dwell.

Rating: 9/10
Tracklist:
1. Searching for R Olmstead
2. The Shadow Over Innsmouth
3. When The Stars Align
4. The Ritual
5. Wanderings
6. In Screams and Flames
7. Mare Infinitum