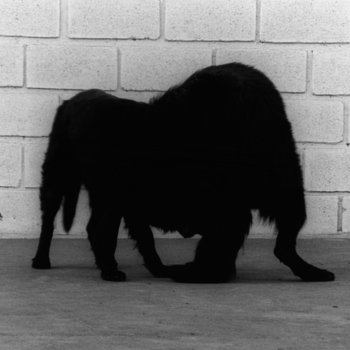 What’s in a name? Well this band is about to sum it up and take total control. Maybe that is an overstatement, but at least your mind-set and eardrums are taken hostage for a short while. This means Gegen Gravitation und Willensfreiheit is intense….real intense. This album contains the two released 12-inch records during their career. Their first self titled (2011) and last spawn named Behauptungsanimalität (2017) can be found on this disc.

Shrouded in mystery and death (since founding member and guitar player unfortunately died by his own hand) GGUW plays an aggressive, psychotic and intense piece of art. While the remaining members stay anonymous it is pretty difficult to find any info about this band. So, let us keep it this way and preserve the mystery and focus on this release shall we?

Musically the harsh and intense black metal is quite repetitive and has a great ambiance. Especially the vocals are something extraordinary. Shrieks, howls, cries and animalistic sounds make the setting rather psychotic, maniacal, sinister, scary and depressive. This album oozes with nervousness which makes it a thrilling, bone chilling ride.

The first track is quite atmospheric. A dark intro starts and ends abruptly before the psychotic atmosphere flows at you like a fast coming funeral mist. The second track has less drama on the vocals, although the nervous sound is still quite sinister. Track three seems to combine both of the two previous tracks making it mournful yet sinister and aggressive tour of depression. It reminds me a little bit of Furze.

On the second part, hailing from Behauptungsanimalität, we are treated upon a minute of silence. And I mean it literally hence the name. Although I am not a fan of these kind of intermezzos, or maybe better saod intros, it makes the last track a real intense trip. Especially the background noises make it something strange and uncomforting.

Five tracks are more than enough of Gegen Gravitation und Willensfreiheit to prove their qualities. Although this record is relatively short with its twenty minutes it gives a good view on what to expect. It is kind of difficult to grasp the dark and manic emotions with this simple review. But I can tell you that GGUW has got me by the balls from the first until the last second of this splendid recording. I am really looking forward to receiving and listening a full length album of this band. Genius, or maybe even ingenious or simply psychotic;), music which will choke you and let you dwell in a chaotic, hypnotizing mind-trip. And by the devils horns: I like it!!!