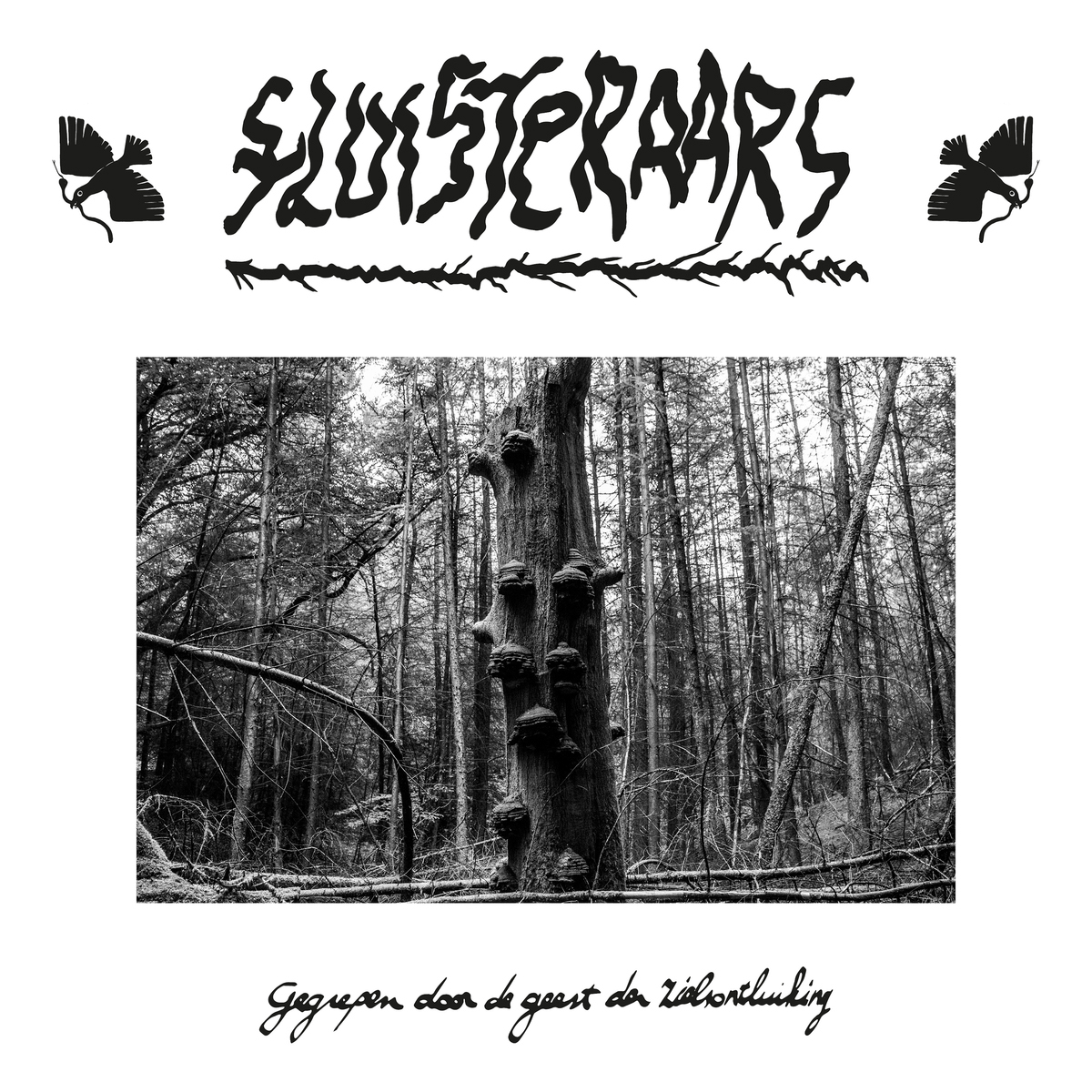 After last year’s acclaimed release of Fluisteraars‘ third full-length ‘Bloem’, the Dutch black metal duo wasted no time writing and releasing a new record. ‘Gegrepen door de Geest der Zielsontluiking‘, will be released by Eisenwald on August 27. Perhaps record number four is even more anticipated than its predecessor, as the album raises the question which direction the band has taken.

Likely inspired and driven by the minimalist recording session, the artwork – almost in style of badmspaintmetalalbums- hints that ‘Gegrepen’ does not exude the same warmth as ‘Bloem’. And indeed, that suspicion is immediately confirmed when the music starts. ‘Gegrepen’ is more akin to second full-length ‘Luwte’ and pretty much a contrast to its predecessor. The overall sound is more raw, dense and dark. In contrast, ‘Bloem’, with a richer production, sophisticated melodies and the occasional brass instruments, violins and choir, sounded more like the heralding of spring. The new record has very little – to none of that.

Album opener “Het overvleugelen van de meute“, is a case in point. The guitars cut in and lay down a impenetrable haze of distorted riffs. B.’s vocals rasp over the pummeling drums, evoking the familiar Fluisteraars sound. The harsh vocals are at times alternated with an almost ethereal humming, perfectly capturing the essence of atmospheric black metal. Halfway through the track, the harsh vocals transform into ominous screams and the pace quickens, intensifying the mood of the song. This tension build-up ends slightly abrupt when instrumentalist M. ends the first song in a more psychedelic fashion, luring the listener into the next track with hypnotic drums and drones, reminiscent Solar Temple’s ‘The Great Star Above Provides’ Roadburn piece.

The evolution of Fluisteraars is perhaps more subtle on this record, but it is definitely present. Singer B has a wider variety of vocals, at times producing harrowing shrieks of insanity that one could only hear in the empty halls of an abandoned mental ward. Also, the various collaborations between the Dutch musicians M. and O. (Turia, Solar Temple, among others) seem to have left a faint mark, mainly audible in the transitions between the songs.

Introduced by a heart wrenching scream, the recently released single, “Brand woedt in mijn graf“, has a distinct post black metal vibe. With the right amount of repetition in lyrics and rhythm, in combination with an eerie soundscape the track almost induces a trance like state for the listener. As the song is faded out with a resonating guitar and chimes (which, as described above, sound familiar from Turia’s Degen van Licht), an echoing, malign, almost post apocalyptic melody introduces “Verscheuring in de Schemering”, the 20-minute pinnacle of the record.

Like a gathering storm after a couple of sultry summer days, the aggressive, albeit catchy riffs on “Verscheuring in de Schemering” build a tension that is (somewhat) released when a clean guitar melody changes the atmosphere from something urgent to calm and melancholic. And just when you think the tempest has died down, the mid section of the song surprises with a drum improv and the odd wailing of a guitar. After this, the track rages on, heightened even more by the howls of B. It’s an impressive feat, possibly the most impressive of Fluisteraars to date.

‘Gegrepen door de Geest der Zielsontluiking’ is not the album you would expect after ‘Bloem’, but certainly one you would expect from Fluisteraars. It embraces the darker atmosphere of the band’s earlier work, but with a more experimental and even more primal approach. If you’re already a fan of Fluisteraars, it’s a safe buy, If you’re looking to spice up your collection of atmospheric black metal, you’re good too.