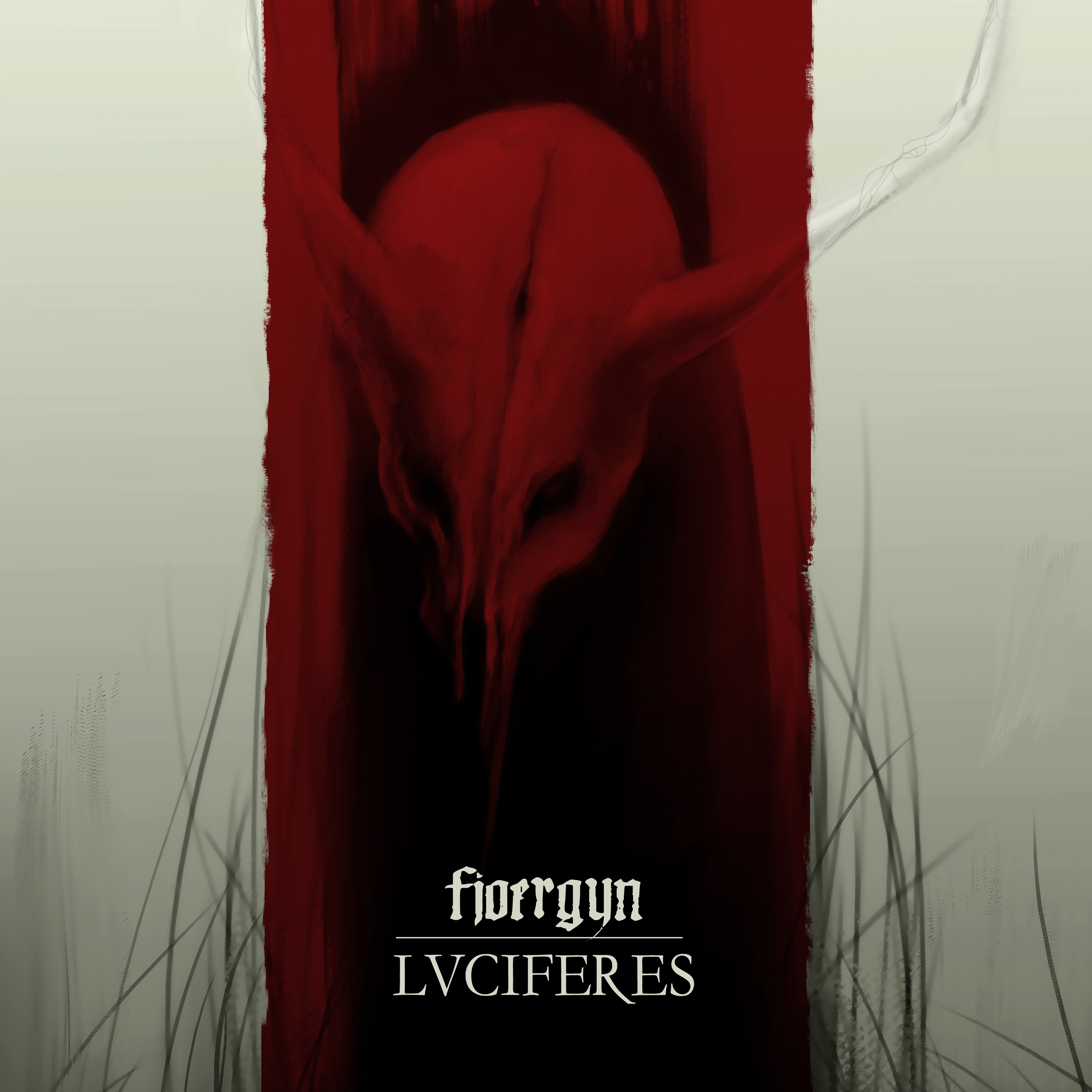 I followed Fjoergyn from their first release ‘Ernte Im Herbst’ until their third full length ‘Jahreszeiten’. All three of those albums proudly stand in my album collection at home, and I listened an insane amount of time to all of them. I fell in love with their rough (avant-garde) black metal combined with a dreamy and fairy tale like sound. But by discovering more and more bands they somehow got forgotten a bit by me and I totally missed the release of their last album ‘Monument Erde’ in 2013. Only recently I started to listen more to all their albums again and so I was happy to receive their new album ‘Lucifer Es’ in my inbox.

My first thoughts listening to Lucifer Es were something like ‘wow, this is heavy’. Where the focus in the first albums clearly lay with the orchestral and classical inspirations; Lucifer Es is harder and heavier. The ‘fairytale sound’ is gone and the black metal sound took over. You only have to listen to fore last song Terra Satanica, which is probably the hardest song on the album, to get my point.
And even though the beginning of the song which is an electric guitar intro wouldn’t make you expect it, ‘Dinner mit Baal’ is the only song on the album that could have fit on one of the previous albums.

Yet evolved or not, Fjoergyn their music, still can best be described as one huge organized chaos. There is a lot going on, all instruments are about equally represented and all the different music lines are perfectly orchestrated with each other with a (guitar) solo every now and then to calm things down.

The album starts with the slow intro MMXVII which sounds more like the opener of a stoner album than of anything that screams ‘Fjoergyn’. But it immediately got me intrigued and wondering how the rest would sound.
As soon as Leviathan starts we hear Stephan Löscher his familiar voice doing a spoken word and about one minute in when he starts singing this already feels and sounds like Fjoergyn again. Like said above, a lot is going on during Leviathan already, but the vocals seem to keep it all together. The song is harder and heavier than I’m used to with this bands, the blast beats are insane, but still some familiar sounding riffs pass me by.
Viva La Inquisition slows down just a little, but the sound stays darker than on the previous albums.
Not surprisingly considering the pretty heavy themed lyrics on this album that mainly cover the ongoing battle between God and Satan and influences on, and rule over humanity.

One of my favorite songs on this album is Blut Samen Erde. The tempo changes, the different vocal styles, the heavy keyboard influences, the guitars and the violin, the general deep dark dramatic sound of it, it all works perfectly flawless for me and gives me the chills in a positive way.
Other favorites are Dinner mit Baal, mainly because the song reminds me more of the time I fell in love with Fjoergyn, and the song is very diverse as well; and last song Freiheit. It has a great build up, combines different styles and feelings and is the perfect ending and summary for the album (though I’m not so fond of the guitar solo).

Like mentioned, Fjoergyn is evolving. I think Lucifer Es is a great album, but I sometimes miss a bit of the ‘old(er)’ Fjoergyn sound and feeling on it. Their sound has become harder, which isn’t a bad thing. But what made, and makes, Fjoergyn quite unique is the combination of this hard black metal sound, with the slower and softer sound and more classical influences, and those are lacking a bit too much on Lucifer Es.