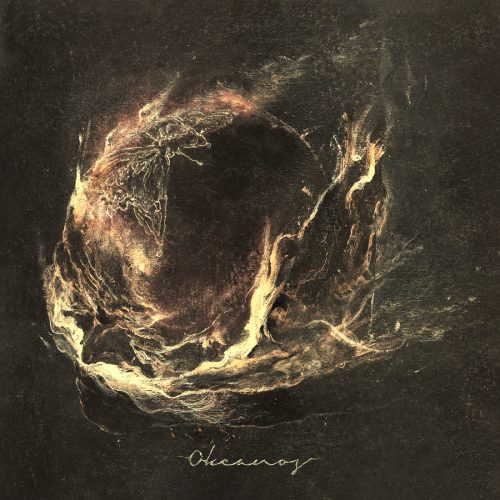 It’s not often that an album comes across my desk and immediately blows me away from start to finish. And it’s even less often that I’m handed an album like that by a band I’ve known about for years – an album that completely changes my perception of that band and their music. Firtan’s sophomore full-length “Okeanos” is one of those rare jewels. It has taken me months to try to properly summarize the complexity of this album, and I still feel like I haven’t even begun to plumb the depths of all it has to offer, but…here goes.

Like I’ve mentioned in recent festival reviews (Dark Troll and Ragnarok), Firtan have been an absolutely inescapable band in the German black and pagan metal scene for the last few years. By the spring of 2018, I had seen them live so many times I’d lost count. I considered them a talented bunch of young lads, but their particular brand of blackened pagan metal was a little too frantic for me – fast-paced and heavy on keyboards in a way that put me in mind of Dimmu Borgir or Finntroll. Amazing bands, obviously, just not my speed. And that opinion of the band stuck with me…until the first time I heard “Okeanos.”

As a regular attendee of Germany’s Dark Troll Festival, I had the opportunity to experience the band performing their new album live in its entirety a few months before the studio release – and the show left me dazzled. Suddenly, their sound was so much more atmospheric and progressive; they slowed down the tempo, turned down the keyboards, and brought in a gifted violinist. Was this Firtan?! Unmistakably, yes. But could this massive live sound translate to the studio?

It turns out the answer to that question is also a resounding yes. “Okeanos” is a 40-minute emotional maelstrom, a nautical-themed opus that draws on everything from classical mythology to the greats of German poetry. It’s a journey into the briny depths, through northernmost eddies with sea monsters lurking just below the surface, and ultimately, into the darkest recesses of the human soul. The best part is that you can hear all of this without even a cursory glance at the lyrics; the reverb on the guitars, the haunting synths, the blistering vocals, everything about the way this music washes over you is like an icy wave on a black and desolate ocean.

If you do take the time to read the lyrics, however, it opens up a whole other dimension to the album – something that’s not necessarily a given in the metal world. In this case, having an advanced degree in philosophy or literature would be helpful in fully getting to grips with the masterpiece Firtan have woven together from seemingly disparate elements of verse. I don’t have that level of qualification, so my analysis is going to sound like German Lit 101, but since these guys have clearly put so much effort into their concept, I felt like I should at least take a stab at it.

In “Seegang,” Firtan have plucked imagery from ancient Greek myth as interpreted by 19th-century German poets Schiller and Fulda: sea monsters as a metaphor for humanity’s failings. They’ve then tied that to Nietzsche’s “Die Sonne sinkt,” selecting and rearranging elements from that poem to create their own story of mortality, longing, and loneliness – with white oceans and an idly drifting boat – in “Tag verweil” and “Nacht verweil.” The violin-based instrumental track “Purpur” is the clear and beautiful eye of the storm, while doom-heavy number “Uferlos” picks back up on the theme of the ancient Greek elder gods of the sea – and humanity’s meaninglessness in their eyes.

The final track, “Siebente, letzte Einsamkeit,” draws on Nietzsche’s poem “Das Feuerzeichen:” A soul stranded on an island and resigned to death becomes a fiery beacon for those blown off course, flames eternally reaching for an unobtainable “seventh, final solitude.” It’s somehow both defeat and victory, hope and hopelessness. I have to wonder if it’s a coincidence that there are only six tracks on this album, rather than seven?

Woof. This is heavy fare, but it really works; Firtan’s philosophical, layered approach to songwriting on “Okeanos” lends the album weight and depth. It’s damned refreshing to see a band in this genre tackling complex subject matter without it feeling forced, and without sacrificing musical quality. If I had to draw comparisons to other bands, I would be remiss if I didn’t mention Firtan’s labelmates Harakiri for the Sky, at least in terms of the overall energy and raw emotion of the music. German masters of atmospheric black metal Eïs also leap to mind for me, especially regarding the careful construction of the concept and the excellent German-language lyrics. I have exactly one quibble about this album: I wish it were longer. “Okeanos” is a mature work that’s rich in atmosphere, substance, technical skill, and feeling. If I ever had doubts about Firtan before, they’ve been blasted away by this tempest of an album.