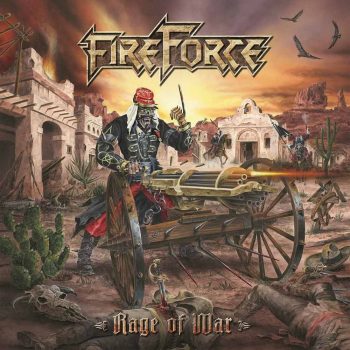 Strap on your boots, put on your battle jacket and listen to this raging album !

This combat metal foursome from Belgium already has a great reputation when it comes to live shows and that resulted in Nightmare’s Matt Asselberghs to become a part of the band. Rage of War is FireForce 4th Full Length album and the first with Matt who joined the band in 2020. If you like Power metal this is definitely an album for you with strong vocals and some classic heavy metal riffs.

Sometimes the songs feel a bit lengthy like the title track “Rage of War”, however that doesn’t take away that this band is Force to be reckoned with. Strong and melodic guitar riffs tie the catchy and easy to sing along lyrics to an epic conclusion. The addition of the new vocalist will open up a lot of extra doors for this band and I believe they will generate a lot of (positive) heat with this new album. The theme of this album remains unchanged from the FireForce recipe. Classis combat metal with historical events about war, battles and bravery. My favorite song on this album has to be Ram It, because it shows the diversity of the band from start to finish. The song is about a fighter pilot who sees no other option then to ram the enemy plane.

The Album is available now and features 12 songs(CD) or 10 (vinyl) and is definitely worth your money.