Words by Erik // Pictures by Wouter

After the success of the first edition of Doc’s Blackfest it was pretty sure that there would be a second edition. Despite the fact that this edition wasn’t sold out, I think it still was a success. Sure, there could be a few more international acts to attract a bigger crowd. This doesn’t mean the variety of bands presented today was satisfactory. Weird fact is that in general the acts on the big stage drew less people than the smaller second stage, except Enthroned. Nevertheless this day had a great atmosphere and with a variety of merch stands with cd’s, LPs, jewellery, art and catering – there was plenty to offer. I had a great deal of fun together with my Metal Exposure mate’s (editorial comment: so did I!)

Dodenkrocht (NL) was the first band to embark on the big stage. After an intro these five metal musicians made a solid impression. With lit candles, skulls on the stage and accompanied by a backing track with keyboards and background vocals the intro started. After that we were being treated on both aggressive and slower atmospheric songs. Throat maniac J really has some impressive vocals. Despite a few errors during playing it was a very enjoyable opener act. With songs such “Exalted (The Snake In The Flesh)” and “A Throne Above” the sheer quality and excellent song writing which can’t be missed. A highly enjoyable band on stage and worth checking out on record as well. I look forward seeing this band again on the stage!

After Dodenkrocht I hurried to the second stage downstairs in order to see Daemonos. It was packed and hot in this small venue. Although the sound on the stage was far from excellent, this blackened death metal band made a solid impression. Dressed in robes and accompanied by the low grunts of Mike Vogels a short yet solid and powerful performance was given. It would be welcome hearing a full length album of these guys. And I mean very soon, because their discography is only consisting of two EP’s.

Back at the main stage Faal managed to enthrall people with their doomish metal. Their latest record “Desolate Grief “ is appraised by both fans and critics. I have seen this band about six years ago. Well, seeing these five Dutch guys and girl on the stage didn’t disappoint at all! This band has grown into a solid, slow, mesmerizing beast.  Slow paced, dark passages with some well dosed faster outbursts are being offered. Good to see that the keyboard is also live, it just adds to the atmosphere. Just listen to the beautiful “No Silence In Between” and be drawn by its dark and desolate ambience. Although It is probably too doomy for some of you blacksters: check this band out, both live and on record!

I have to point out that score I have given on Asgrauw’s third album “Gronspech” was a little on the low side when I reviewed it. These three Dutch dudes manage to create (editorial comment: really outstanding) ice cold black metal. With references towards Scandinavian acts such as Darkthrone and old Emperor, it is good to see that the Netherlands are as good as any other country in making dark, aggressive and gloomy tunes. Live Asgrauw is a force to be reckoned with.  Aggressive songs, a punk attitude high-lighted with the vocals of both guitarist Vaal and bass player Kaos make it a black trip in the Dutch depths of Hell. The small venue was packed, really packed. Presenting one new track from their upcoming album and tracks from “Krater” and “Gronspech” it was an aggressive and highly enjoyable performance. Asgrauw never manages to fail and has not failed to impress me this time. It is about time this act gets more recognition in the black metal scene. They are ready to conquer!

It is hard to top Asgrauw’s performance but Ceremony is doing very well on the big stage. It’s a pity that this band does not have a bigger audience this day. They certainly deserve it. Maybe it’s the fact that this band is more death metal orientated? Who knows? Doesn’t mean that these guys from Ridderkerk don’t have anything to offer. On contrary, powerful solid riffing, tight drumming and a great stage performance with banners and luscious back drop is being presented here. Most of the songs are hailing form the “Tyranny From Above” album (’92) which has been re-released in 2016. A superb album which is definitely worth a try. Let’s hope these guys have more luck the next time and gain a bigger audience.

I didn’t know of Adversarius before. With only one demo and the EP “Across the Ageless Waters” on their discography they have been under the radar. But impressed with their aggressive, occult and fuck you! attitude in their performance this will hopefully change soon. Frontman Set‘s stage presence is really something to remember. About time this band releases a full length album and get on the road more in order to gain a solid fan base. 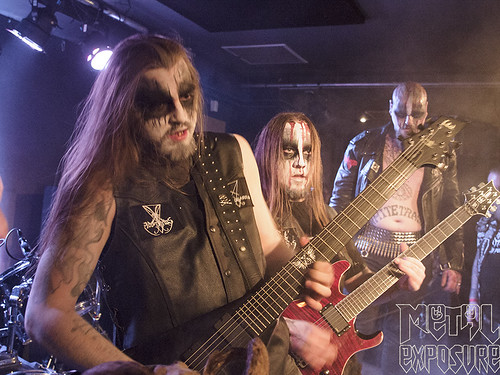 Back to the big stage again. Swedish Hyperion played veni, vedi, vici on my ass. Man these young dogs really played well! Although there were some technical difficulties before they started, it was immediately forgotten after the intro and great track “Novus Ordo Seclorum” (from debut full length Seraphical Euphony) came out of the speakers. With influences which remind me of Dissection, Dimmu Borgir, Opeth and even Emperor it was a thrilling, aggressive yet melodic ride enjoyable till the end. With proper promotion these guys can be very big. Just listen to a song as Blood Of The Ancients and support this band! 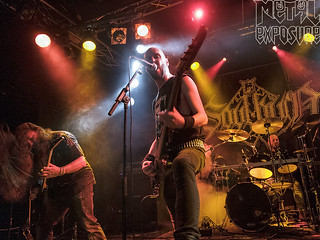 The same goes for Soulburn. After not being impressed at Eindhoven Metal Meeting a few years back, these Dutch black/death veterans took me by surprise today.  With a line-up hailing from international recognised bands as Asphyx and Legions of the Damned, they overwhelmed me with their professional performance, good song writing and intense power on the stage. Their latest offspring, Earthless Pagan Spirit, is a killer album. Also on stage songs from this album are a treat on your ears and pound on your earplugs until they keep sticking. Together with Hyperion this band was the surprise of the day. A job well done and I hope I will see them live soon again.

I am quite a fan of Enthroned. Ever since I saw them some ten years back in the WillemEen, they managed to impress me with their occult sound. Having seen them live quite a few times now, they have to disappoint. With a discography the Devil can be proud (and despite numerous line-up changes) they always managed to create really good, dark, fast and aggressive songs. Especially when I hear “Deviant Nerve Angelus / The Burning Dawn” and more recent songs from the album Sovereigns. Dark, yet compelling Enthroned made a classic séance with the right ambiance and attitude. Enthroned rightfully was the biggest headliner of today. And in my opinion still is one of the biggest black metal bands in Belgium as well! Hail Enthroned!

Last act Gnaw Their Tongues is well…. my cup of tea! Although it might be too electronic and monotonous for most blacksters today, their terrifying sound really appeals me.  Ever since the superb and utterly maniacal “All The Dread Magnificence Of Perversity” this act keeps being intriguing. Mories, also known from Aderlating and numerous other acts, manages to fascinate me with its ‘crazed, fringed, dark, noisy creaks, squeals and electronic outbursts.  Also live this is a treat, or better said a terror, on your ears. It’s unsettling; it’s harsh and lets me explore the darker parts of my mind. A well-deserved closing act on the small stage today.

Thus ended the second edition of the second day of Doc’s Blackfest II. Unfortunately I missed two performances due to beer obligations and conversations with old friends. With quality acts, a great atmosphere I really enjoyed myself. I hope next year there will be another edition of this festival. So be there next time!