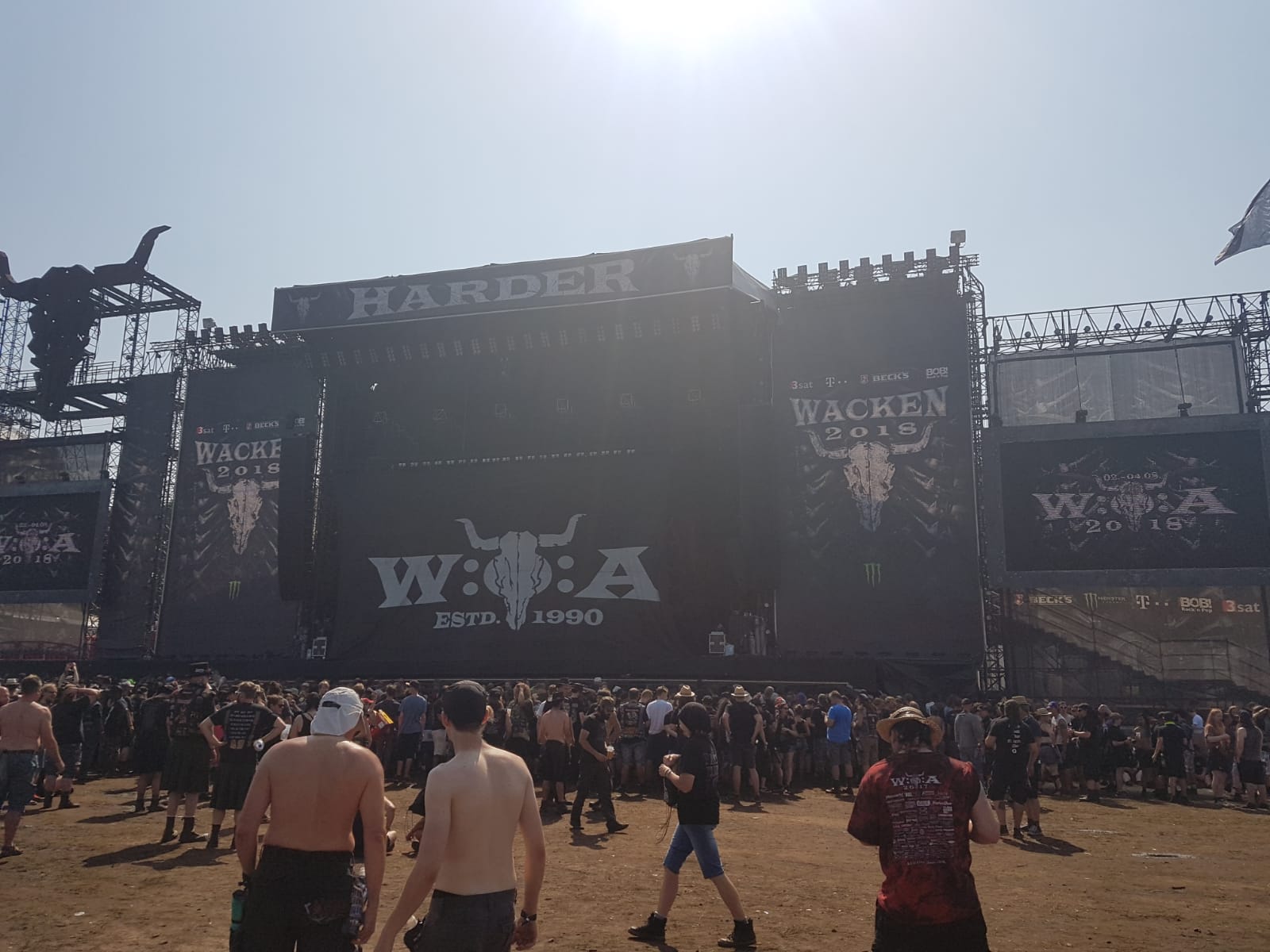 The weeks before going to Wacken all you do is check the weather. With a motto like “Rain or Shine” it’s always a guess what kind of weather you get. This year however the weather gods took Shine a bit to literally as it was one of the hottest festivals in my memory. However that didn’t spoil the 29th edition of the world’s biggest metal festival !!

It was a very slow day for me as I was still trying to find a way to beat the heat. Stiff Little Fingers played the Headbanger Stage and they absolutely rocked it. It’s good to see these “oldies” still tear down the stage. They still bring the raw energy the punk scene from the 1970s brought to the world and Wacken went crazy. If you like 70’s punk, just check these guys out. They still put the Fast in Belfast.

Dust Bolt was next on the list and they delivered a great live show as always playing their Trash on the Wasteland Stage. I can’t remember seeing this guys play a bad show and Wacken was no exception. I did however walked away a bit early from the show to make my way into the tent, where progressive rocker Fish was playing. Fish is known for his solo work but most importantly his work with Marillion. It has been over 30 years when Marillion recored their album “Clutching at straws” and that is what this evening is about, the setlist consist of 8 songs of that album with 2 of Fish’s solo songs. WOW is all I need to describe it. It’s great to finally hear him sing these songs and with so much power and energy. I was totally mesmerized with this performance! 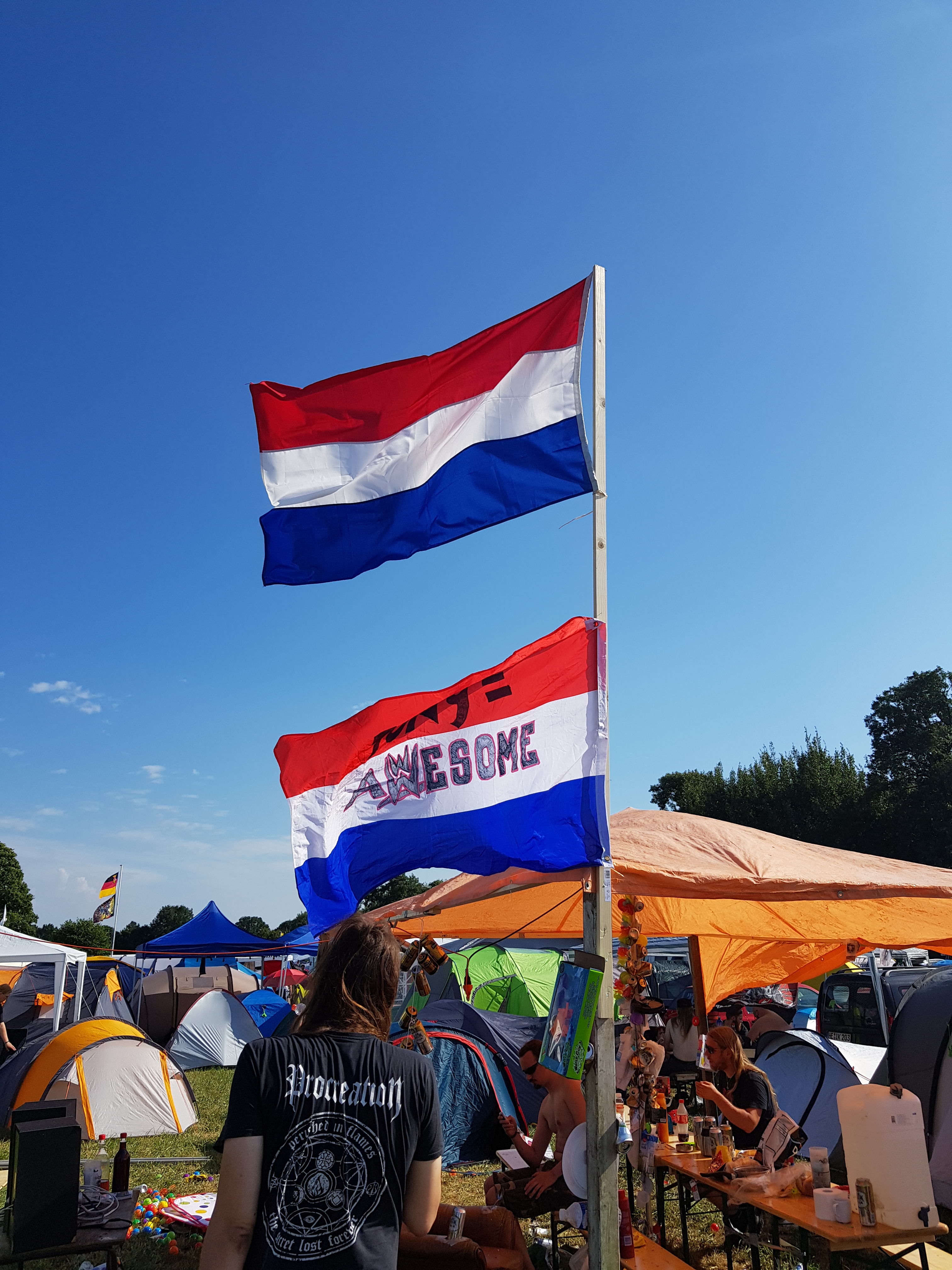 Up next were the old school rockers of Nazareth and they are back with a vengeance. Hair of the Dog, Love hurts and all the other songs played to perfection on the W.E.T stage. It’s great to see all those bands from the 70’s playing again and to see that people are still interested in their music even though some of them are just there for the hits (yes i’m guilty as well). As we walked away to get some food we were not allowed back into the headbanger stage to see Sepultura, because it was way too crowded in there. We walked back to the tent and started preparing for the next really hot day. When we came back to the tent that night we found out that our friend Wilfred went down on one knee for Linda and she said yes !!

Day 1 Thursday
Buying myself a new tent before this festival paid off. My new fresh and black tent made sure I didn’t die of a heatstroke in my tent before 10 o’clock. Skyline was the first band on the menu and it was okay. Throwing in some special guests and rocking cover songs from Ozzy, Maiden and Rammstein. Skyline is always the opener of the mainstage at Wacken so this year was no exception. Because of the heat, we went back to the tent to get some shade and try to recover. We went back for Vince Neil lead singer of the “late” Motley Crue. As a big fan of the Crue, I was really excited to see him again. I’m not trying to be mean or disrespectful here (it really broke my heart as a fan) Vince Neil was nothing that he used to be. He looked like he ate the whole band and it sounded even worse. The band behind Vince were really great and saved a lot of the show.

When the weather started to cool down there was one band hitting the stage that made sure there was a lot of heat in the crowd. Enter Behemoth. From beginning to the end this show was amazing. Earlier that day they announced a new European tour and released the new single God = Dog to the world. Starting of with Ov fire and the void, they lit the crowd on fire and I could feel the heat and the passion from the music through my whole body. We even had the live debut of the new song God = Dog. This had to be one of the best performances I have seen from the band and to not spoil it for everyone. This concert among various other can be found here.

Danzig was at the festival because of the 30th anniversary of the self titled album Danzig. He just can’t do it anymore. Great band but it all fell flat as soon as Danzig started singing.

Heroes of the night were Judas Priest as they ripped through Wacken without looking back. Coming out with Firepower and staying on top with classics like The Ripper (a song they played last on the tour in 2009) and of course Painkiller, Hellbent for leather and You’ve got another thing comin. The band was on top form and to make it a show to never forget was the return Glenn Tipton who was recently diagnosed with Parkinson decease and therefore took off the touring duties of the band. He made a special appearance with the encores Metal Gods, Breaking the Law and Living after Midnight. After the final notes Wacken was left satisfied and I couldn’t wait what the next morning would bring. 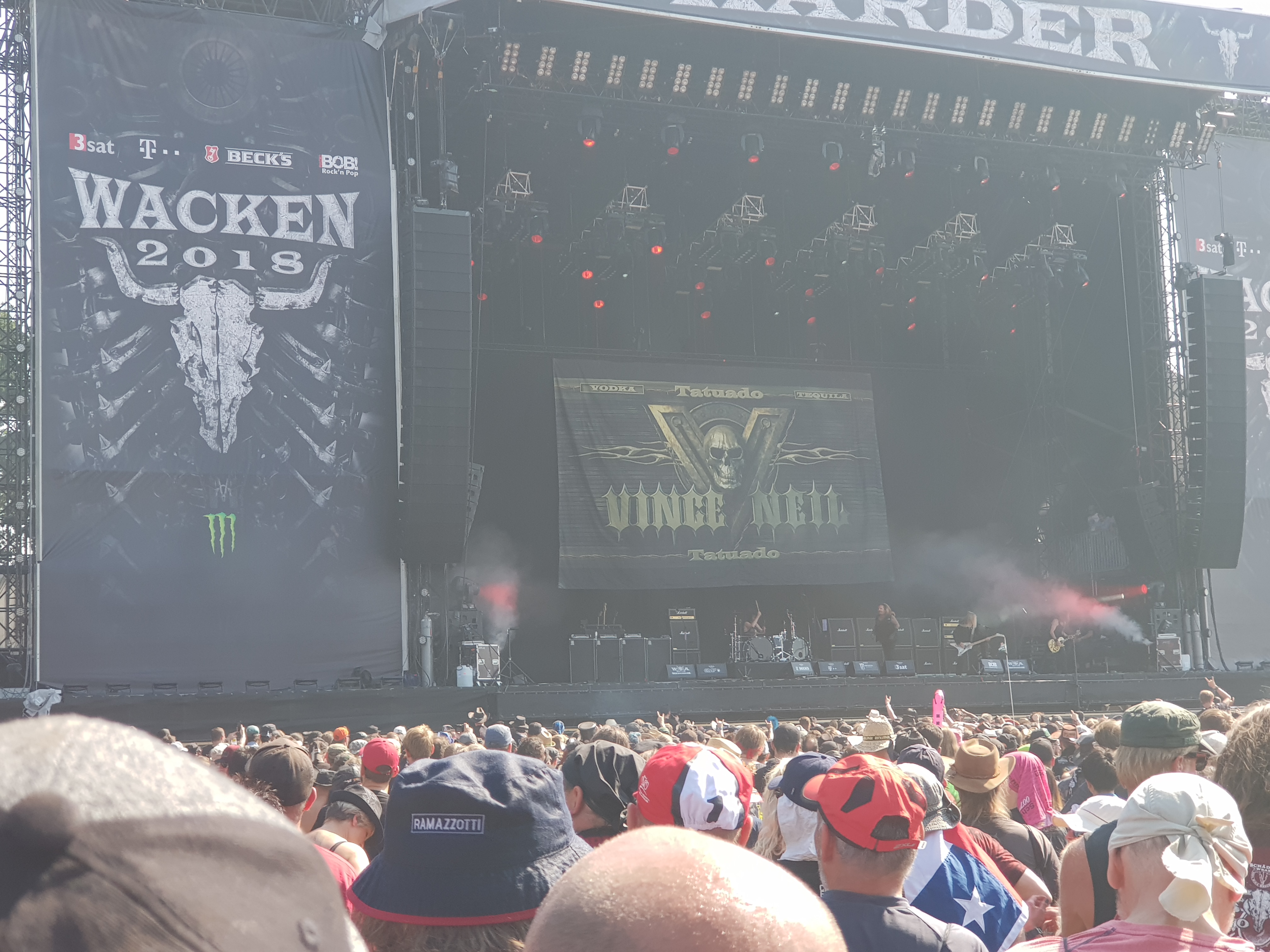 Friday was actually quite a blur for me. Not because of drinking or anything else, but because I was really nervous and excited that I had an interview with one of my heroes. Fozzy’s Chris Jericho has been a hero of mine since I was a young boy watching wrestling on the TV. When I found out years later that he also played in a band called Fozzy I was instantly hooked on the music. Fozzy played Wacken for the 2nd time in 2018 (first in 2013). It was really hot that day and the tent was filled with eager Fozzy fans awaiting for the band’s return at Wacken. From the moment they hit the stage it was absolute mayhem. It was a shame that they didn’t play any longer but there’s always a next time. After the show I had my interview with lead singer Chris Jericho which you can find here. The other band I really wanted to see this day was Motorhead tribute band Bömbers but they were forced to cancel the show because the bassplayer wasn’t doing to well. They were supposed to play on Friday and Saturday and eventually both shows were cancelled.

Recovered from the day before we started with Scottish pirate metallers Alestorm. What a way to start a good day at a festival. The party started with Keelhauled to bring everyone on their feet. The band was in a great form on this sunny Saturday afternoon and really made Wacken the party it’s supposed to be. Lots of songs from “No grave but the sea” passed the setlist and even some fan favorites like Wenches and Mead with dog remix, Hangover ft Beef Guy on the mic and of course Fucked with an Anchor. From start to finish a proper great show and we all were sad when it was over.

With Alestorm leaving the stage it was time for another UK band. This time it was Skindred‘s turn to show Wacken what they had in store. Skindred is always a fun band to see live. Technically these guys rule and their charismatic frontman Benji Webbe knows how to hype you up. From the first minute you know it’s time to party and it makes you want to bounce up and down. If you are ever at a Skindred show just remember to take your shirt off and hold it over your head when you hear.
ARE YOU READY TO DO THE NEWPORT HELICOPTER. Up next were the glam metal legends of Steel Panther. If you have ever seen a steel panther show you know it’s more of a show than just playing music. Telling stories making fun of each other and playing some songs in between. This year the show had a lot of song from their first album Feel The Steel and it was just amazing. At one point during the concert just before they started playing one of my favourite songs “Turn out the Lights” I wanted to cross something of my Wacken bucketlist. Crowdsurfing from a long distance all the way to the stage and it was glorious ! Because of that the concert made it straight to my top 10 best gigs ever and it didn’t hurt that Steel Panther was playing awesome.

Still feeling the steel panther high I slowly retreated myself for Helloween. Helloween played Wacken with their Pumpkins United tour. This means that all 3 the vocalists were on stage together. Kai Hansen, Michael Kiske and Andy Derris all took their songs and you could really see that Helloween had become a force to be recon with in the Power Metal scene. From beginning to the end you could feel the excitement from the stage make it’s way to the 60.000 people in attendance. This show is also available to watch on the link provided above. After Helloween it was time to go back to the tent because of the long journey ahead. 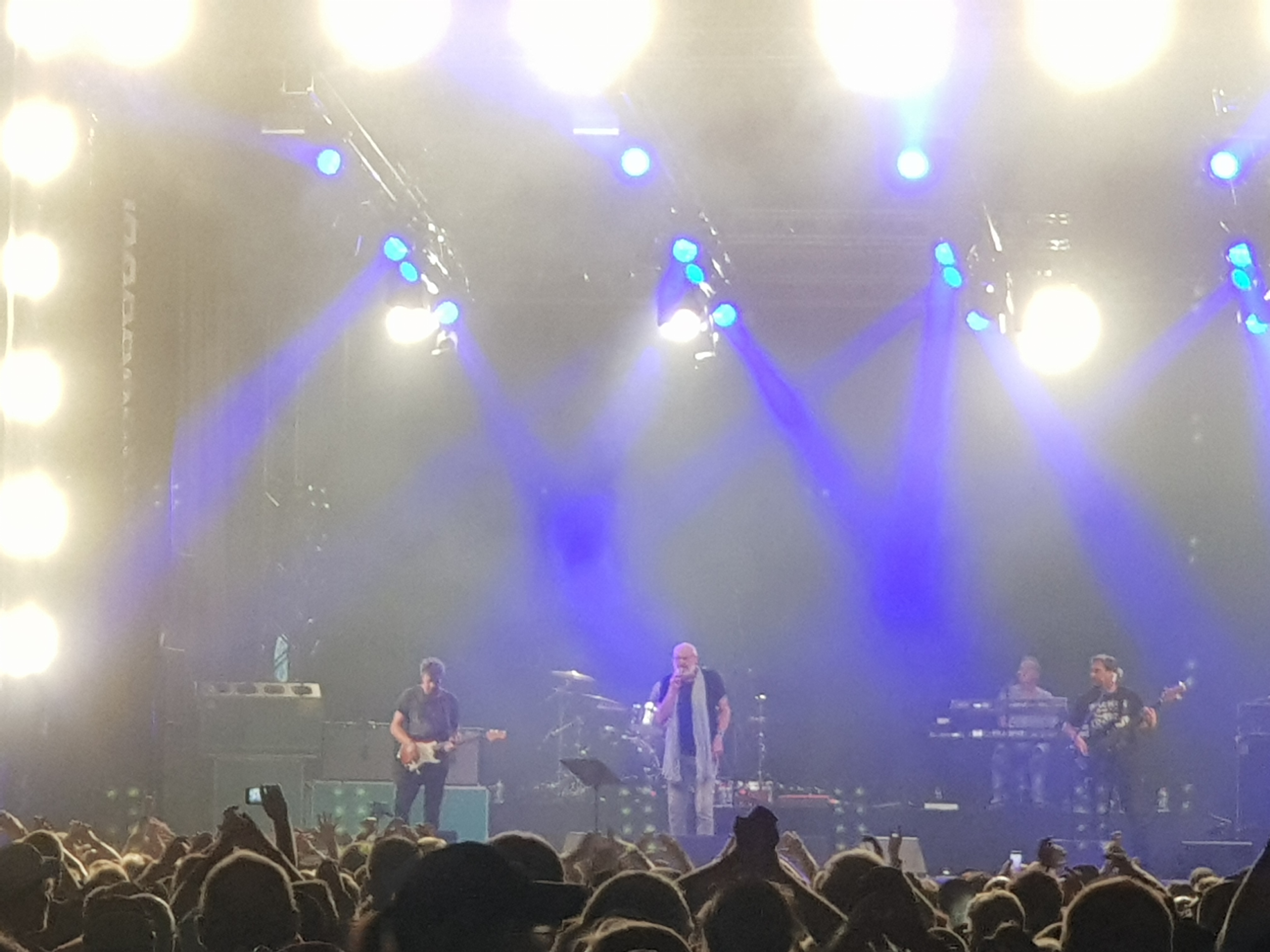 This year’s wacken was amazing. It was way to hot (but it’s better than rain) and I didn’t see as many bands I wanted to see because of it. However we are already planning our trip for the 30th anniversary of Wacken in 2019 because Rain or Shine, Wacken is a place where everyone should’ve been once in their lifetimes.

The 30th anniversary of Wacken is already sold out !!

Review by: Antonie and crew