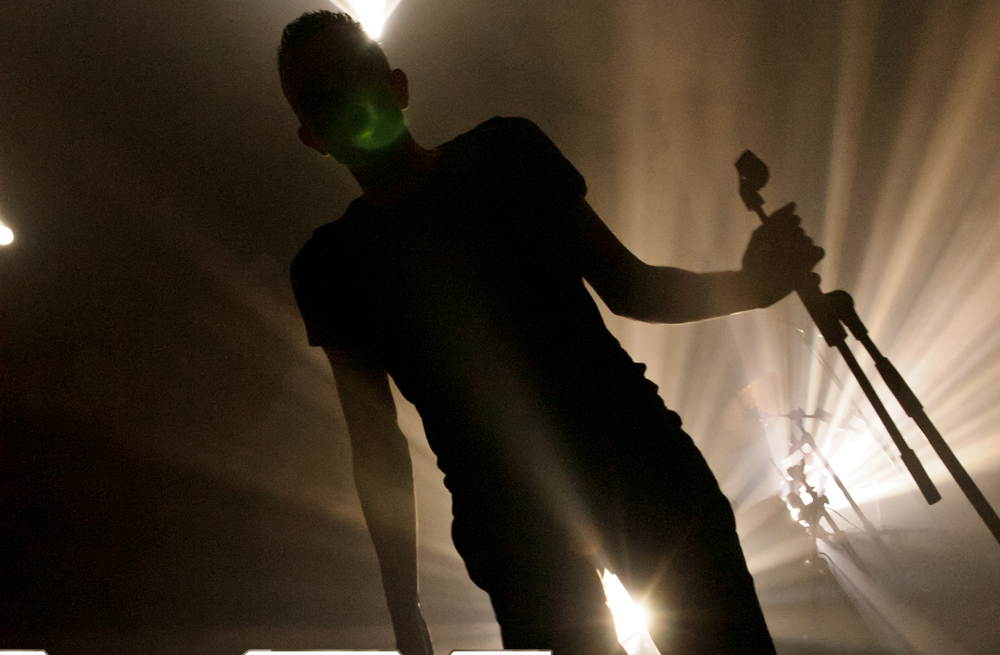 Words & Pictures by Wouter B.

The year is 2017 Anno Bastardi, and the month of (virtually) no sun is upon us. Long are the nights, cold is the north wind. Murky frozen grounds meet a grey sky at a non-distinguishable horizon and form a bleak vista of the world. Indeed, the veil between ours and the underworld is thin and torn. Daemons roam both day and night, looking for some fresh souls to possess or taunt. If only for the hell of it.

Nothing serious really, just a bit of fun. All souls? No, not all. Those of the unlight, creatures of demonic nature and other black-hearted souls might be spared. But then, how are they supposed to have some fun? Well, by heading Into Darkness!

As traditions are something daemons like to stick to, each year the first weekend of December brings us one of the (few) Dutch landmark black metal festivals: Into Darkness. Held in the Neushoorn in Leeuwarden, Into Darkness this time again brought us a nice selection of the darker shades of metal. With three stages and bands varying from Ulsect to Orewoet to Dark Funeral, there was simply a lot to choose from – any colour you like, as long as its black. 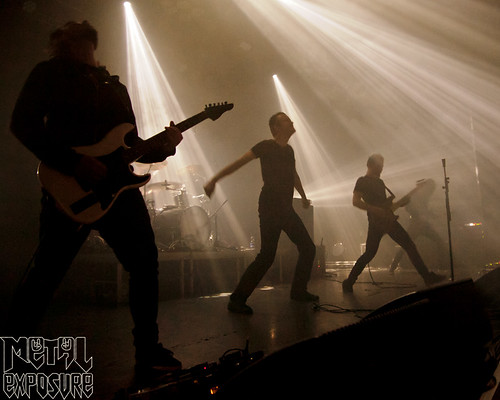 After a long and pretty drive over snowy forests and fields, returning from our neighbours to the east (who happened to have Gaahls Wyrd and Audn playing, highly recommended), we arrived in  ‘Amsterdam du North’, a.k.a. Leeuwarden. Just in time to watch Ulsect (Netherlands) in the main venue, a mix of technical, avant-garde and doom infused death metal. Besides arguably having the best light show, they also were one of the (local) technical talents to kick off the festivities. The band shares members from (ex) Textures and Dodecahedron, and this could be heard in quality and play. Not something for the quick and easy-listen, but rather an evening with whisky and rainy skies. With the occasional lightning.

Well, as it’s black metal, we must also have a ‘trve’ band, right? Right, so bring it on, LVTHN! Merciless Belgian black metal, avant-la-lettre! According to a well known, oft tried Scandinavian recipe (e.g. One Tail, One Head) but some just taste better than others. No lights, enough incense to anesthetize a Tibetan monk. Remorseless, relentless – it even comes with a groove! 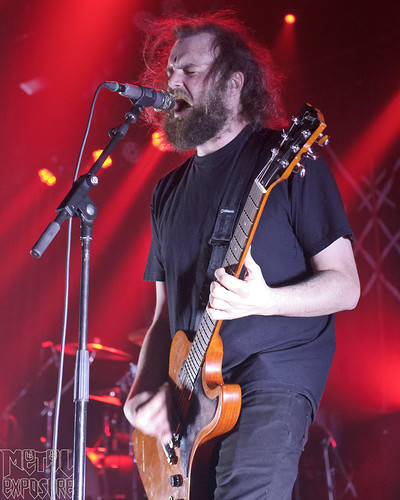 We stay a bit longer in the realm of our neighbours to the South with the tree headed Wiegedood (Belgium, 2014). I personally really liked their first album, De Doden hebben het Goed. The sequel, aptly called De Doden hebben het Goed II was also well received. They played truly awesome shows at Thronefest 2016 and 2017, so I expected no less from them this time. However, something must have been wrong, as the stage play looked miles off. The music, although still a wall of thundering drums and destructive riffs, felt a bit unconvincing. As Wiegedood is typically a band that requires a certain immersive setting to enjoy, I would say this was one of their weaker plays.

Time to make my way to the smallest room the Neushoorn offered this evening, 1.48, to see the next band. Speaking of time: we didn’t have too much with such a packed, back-to-back billing. The organizers would do well to consider slightly less bands and a bit more breathing (and drinking) time. This was an issue last year and more so this time.

Well indeed, almost a garage like atmosphere was present at the 1.48, lack of oxygen included :). But hell, they served beer and a portion of atmospheric/progressive black metal from Gotha (Thuringia, Germany) – Farsot (1999). Though sounding brilliant on studio, with a densely layered, down-tempo laid back groove that is quite unique, they failed somehow to hit the mark during the show. Maybe it was because of sound problems (seemed to take a long time before the commenced playing). Still highly recommended (or even addictive, try their 2017 release Fail Lure)!

Temple of Baal (Paris, 1998) have been around for quite some time (1999) and can be grouped under some of the quality black/death metal France has to offer. Not shy of solos nor aggression, they manage to emanate a palpable degree of hatred from the stage. Which was exactly was the case during their show at ItD. Their wanderings in being a bit on the thrash part of the black metal spectrum (think Valkyria but also Behemoth) didn’t really play out on the show, as it sounded a bit repetitive live. The complete opposite holds for their music on album; I recommend anyone to listen to their 2015 release Mysterium. 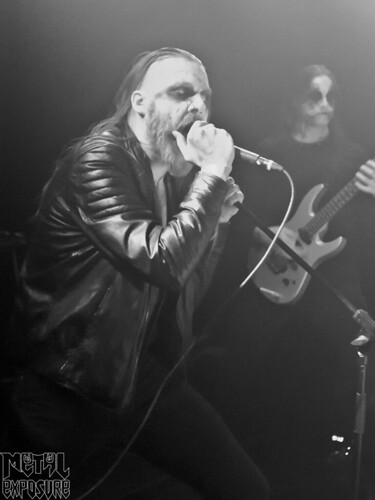 Once, not too long ago, I had a discussion with an otherwise friendly German lady. On the many quality Dutch black metal acts, versus the not so many German ones – according to her at least. Of course, I cordially disagreed with her on the latter part. Today however, after having seen Orewoet (Netherlands, 2014), I have to hand it to her: we do have some awesome, brutal stuff in our flat, clay-cursed ex-swamp of a country. To start with the spoiler: this was the band of the evening! Holy shit-in-a-skull, this traditional, blasting, melodic, old-school yet technical and tight black metal made you almost believe you were standing in Finland, looking at Horna, Sargeist or one of their ilk – put on steroids, however. Although they have thusfar only released one EP (Afrodiascum der Vroomheid, 2016), these guys are definite worth following.

The technicalities continue to climax here and there, although of a complete and utter different shade of black: the Britons of Akercocke (London, 1997). Unknown to me, I was greeted by a thorough, progressive/avant-garde amalgamation of black and death metal. With lights rivaling that of Ulsect, the show was also a pleasure to watch. Although a bit on the high side with complex tempo changes, funk/jazz influences and intermezzos, their guitar work was real pleasure to watch. Likewise their grunting vocals, but the clean ones not so much. The latter had me actually leaving prematurely, as I could not really get their groove and was set off by their off-key(ish) vocals. 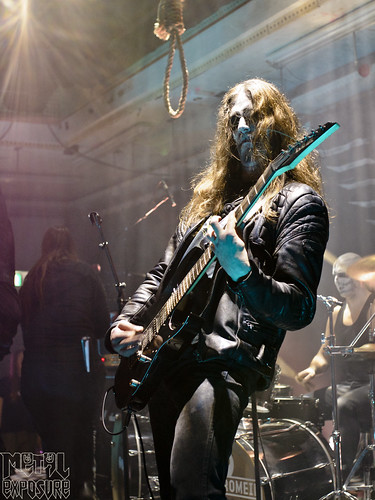 More to my liking was Dutch (Frisian, 2000) anti human black metal entourage Lugubre. Traditional, corpse paint, classical fast riffing and a very clear message: anti life. Supported by a gallows rope looming over the stage, they truly owned and destroyed the small Arena. Though not without melody, their aggressive atmosphere was dished out by the dual guitar breakneck riffing. The big bad ass vocalist (Asega) made a convincing display of heralding the worlds’ need for depopulation. No hope, no light. Go forth and die. A fast and tight play, loud as hell. Hell, this was a show for the books.

Definitely not a new kid on the block is headliner Dark Funeral (Stockholm, Sweden, 1994). Just the kind of music one needs to speed up digestion and make room for the next beer. Their (or rather, Lord Ahrimans, beingonly remaining member since the birth of DF) sophomore, iconic album The Secrets of the Black Arts heralded the initiation into black metal for me, a long time ago. In 2016, after a hiatus since 2009, Dark Funeral released Where Shadows Forever Reign, which may even rival Secrets. I massively enjoyed the show, with the infective blast beats, scream-along lyrics and insane riffing. In terms of stage play, it was a bit run-of-the-mill work. But hell, the music spoke for it self – Open the Gates, Where Shadows Forever Reign, Secrets of the Black Arts… The only song missing was My Dark Desires but I guess Satan will spare them for this oversight. 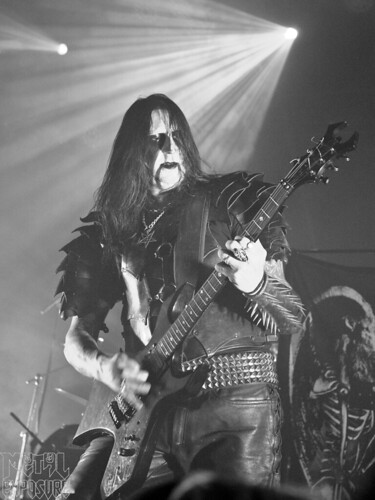 After satanic violence of the (self proclaimed) ineffable Kings of Darkness, Ultha (Germany, 2014) graced the Arena with their dreamy, slightly madness infused atmospheric black metal. I still do not know what to make of: their music is brilliant – laden with desperation, loneliness and doubt. Artistically and musically Ultha is definitely not run of the mill. They mix, seemingly effortless, everything from keyboard driven bombastic to nihilistic styles in technically magnificent compositions. But the voice (“C”)…it just brings me on edge, the (Austerre like) screamo/pitched screeching. Fortunately it is not constant and the normal screams do bring balance and show just how versatile their talent is. The play was enrapturing yet vexing and made me leave a bit early, also in search of some fresh air from the packed venue.

A bit less packed was the 1.48 in which Ars Veneficium (Belgium, 2013) had their performance. Although not much new and very much in the spirit of olds-school 90s black metal, they managed to entertain by doing just that. 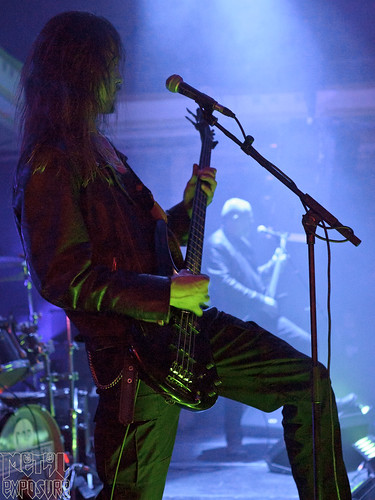 Closing act was Sammath, another jewel set in the Dutch crown of his infernal majesty. A guitar, bass and an animal for drums is all you need to put down one hell of a sound. Unforgiving, relentlessly hateful and faster than a Mig-21 – what else do you need to close off the evening? Singing about war, hell and triumphing in hatred, they owned the stage with a godless arrogance befit their status.

Into Darkness this year brought a lot very good acts in many of shades of black. Keep up that good work, we love it. However, it was a bit too much this year, leaving little to no room for talk or a beer unless you were willing to sacrifice one of the many plays. Perhaps a bit less tight on the running order and amount of bands? Well no big matter, we will be there!