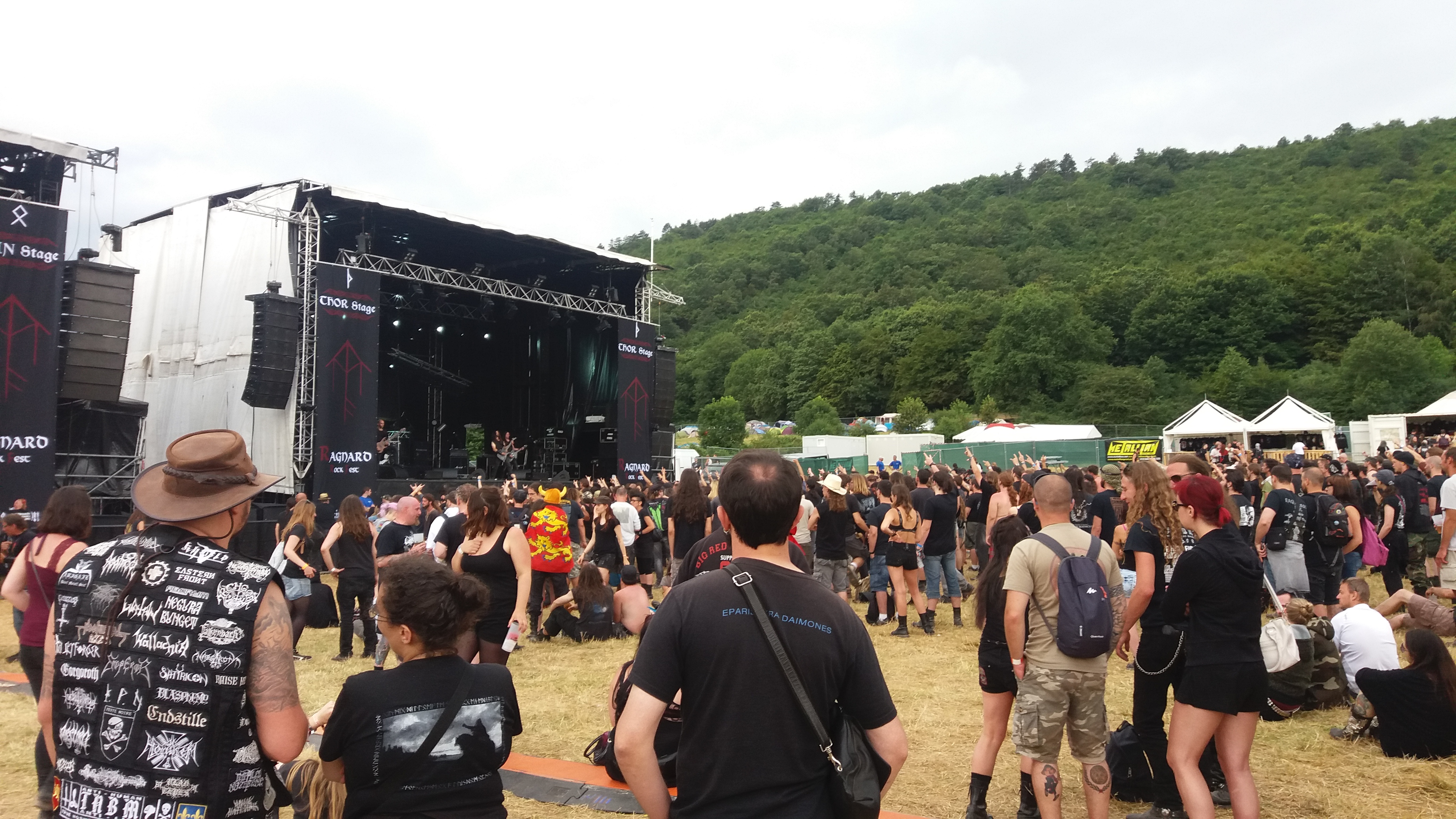 Every now and then, friends of metal-exposure bump into something that gives them a feeling they just háve to write about it, and so every now and then you’ll find an article on metal-exposure written by guest writers.
Last month this happened to Monica van Uffelen (who has already written for metal-exposure before) and Nanette Mesker when they visited the Ragnard Rock Festival in France. Read what they have to say about it:

After a long drive to France we arrived on Friday evening around 10pm at the parking place. It’s not allowed to park next to your tent, so people collected their tents, alcohol and more stuff and waited in line to get a wristband. We arrived late, so everything went quick, but others told us that they were waiting for over 2 hours to get a wristband. After that, the camping was only a 500 meter walk away of the parking place. 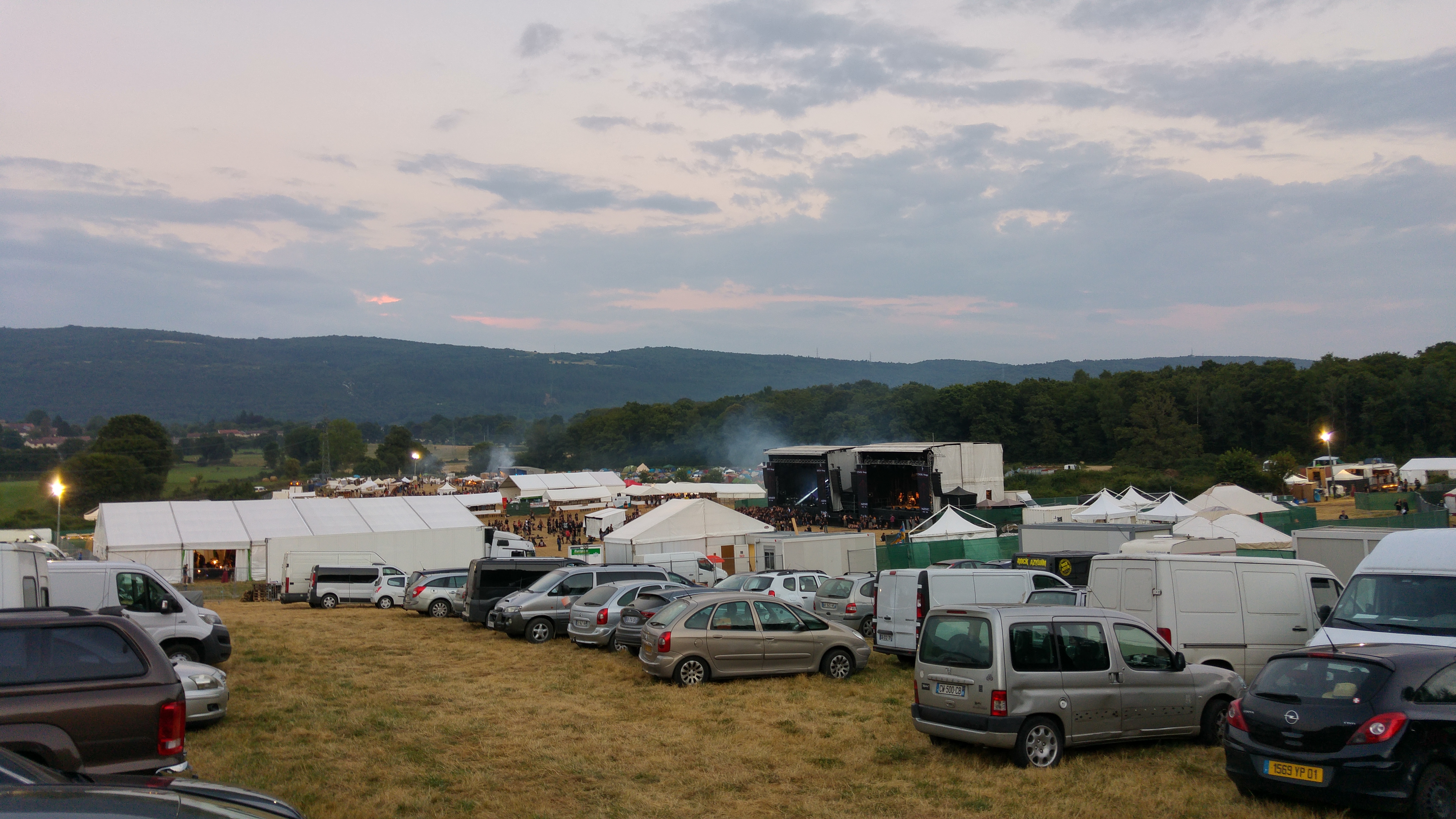 The festival works with tokens called “Runes”, that costed € 3. Besides the Runes you could also withdrawal cash at the festival, which was very convenient because the drinks, and at some of the food stands you had to pay with the Runes, but at some other food stand you had to pay with cash. That was at bit confusing. Good thing about the food was that it’s fresh made. You could choose out at least; Panini’s, Banquettes (Drakkar shaped!), hamburgers, vegan food and of course French Fries. After paying your food, you had to wait a minute so they could make it fresh. We liked this fresh made food more than the regular fast food you mostly can get at festivals. What we also have to say is that the wine was really tasty! Exactly like we expected of France.

The showers and toilets were well organized. The eco toilets were surprisingly clean and were found both at the camping side and at the festival side. Still, they could have placed more toilets… The showers costed € 5 for the whole weekend and were opened from 8 am to 1 pm and from 6 pm to 8 pm.

Compared to Belgian, Dutch and German festival visitors, the French festival visitors of Ragnard Rock Fest were very clean (no dirt, food, drinks or garbage at the terrain) and they were less loud at the camping side by night. It also seems that French audience parties much more in front of the stage! We have seen so many dancing people with all kind of moves in front of the different stages, during different bands! Even the children of the Viking area were left alone, dancing together at Nargaroth. That also showed us how extremely polite and well behaved the French audience must be. 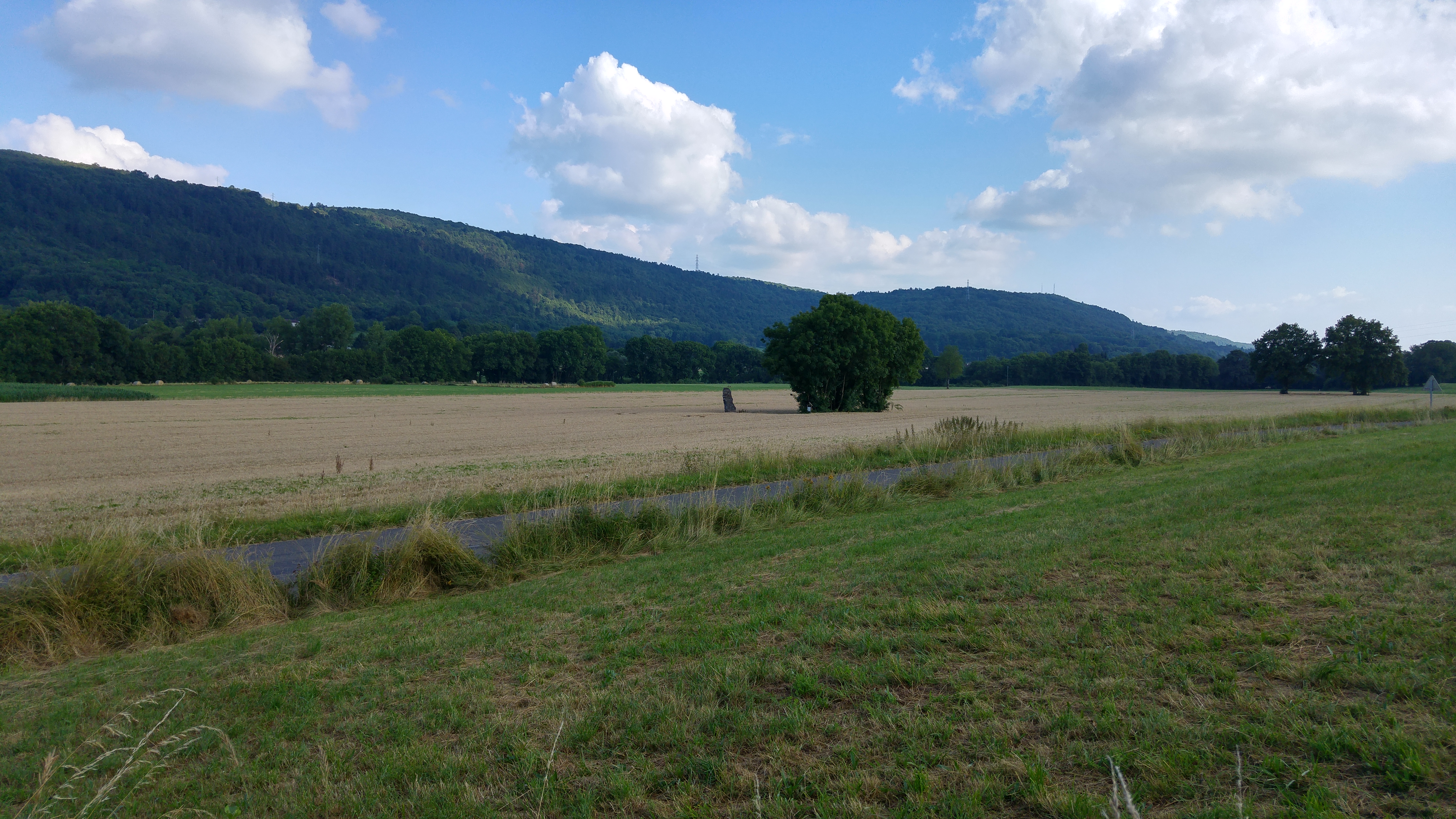 A nice detail about the festival; The River Suran goes through the village. If you’re up for a walk with an average of 3 kilometers, you can find perfect picnic places underneath the trees, next to the river. The river is also suitable for a refreshing moment. You can find the route in the direction of the only Menhir in this region. Actually, the festival festival is surrounded by hiking trails, and the stages begin to play after 2 pm, so time enough to discover a bit more!
Simandre sur Suran itself isn’t big enough for a supermarket to be found, and we dare not to say for sure if you can find a boulangerie. But: there is a restaurant/hotel in the center.

Like other pagan/black metal festivals, Ragnard Rock Fest had some problems with national socialistic ideas by outsiders. Of course if you book some bands like Graveland, you can expect this at least a little. They don’t want to have any bad nationalistic news about the festival.
We understood the French press had already written something about “a neo-Nazi festival”. But this was so untrue! Nothing to do with Ragnard Rock Fest. But because of this, the festival organization asked everybody at the camping side to remove their flags. And so our Gelderland flag was removed during the Heidevolk concert.
Nevertheless we would like to state one more time that any link between Neo Nazism is ridiculous.

The festival area had three stages. Two mainstages: The Odin stage and the Thor stage, standing next to each other. And the cozy Heim stage, in the Viking area, where also a Viking market (with loads of handmade Celtic and Viking symbols, leather bags etc.) and a Viking camp were. They also made a kind of “arena”. With high quality Viking fights, fire (work) spectacles and other medieval -theater-related shows. While eating your drakkar- baguette with pork, people behind where fighting on the battlefield for their actors-lives, for example. 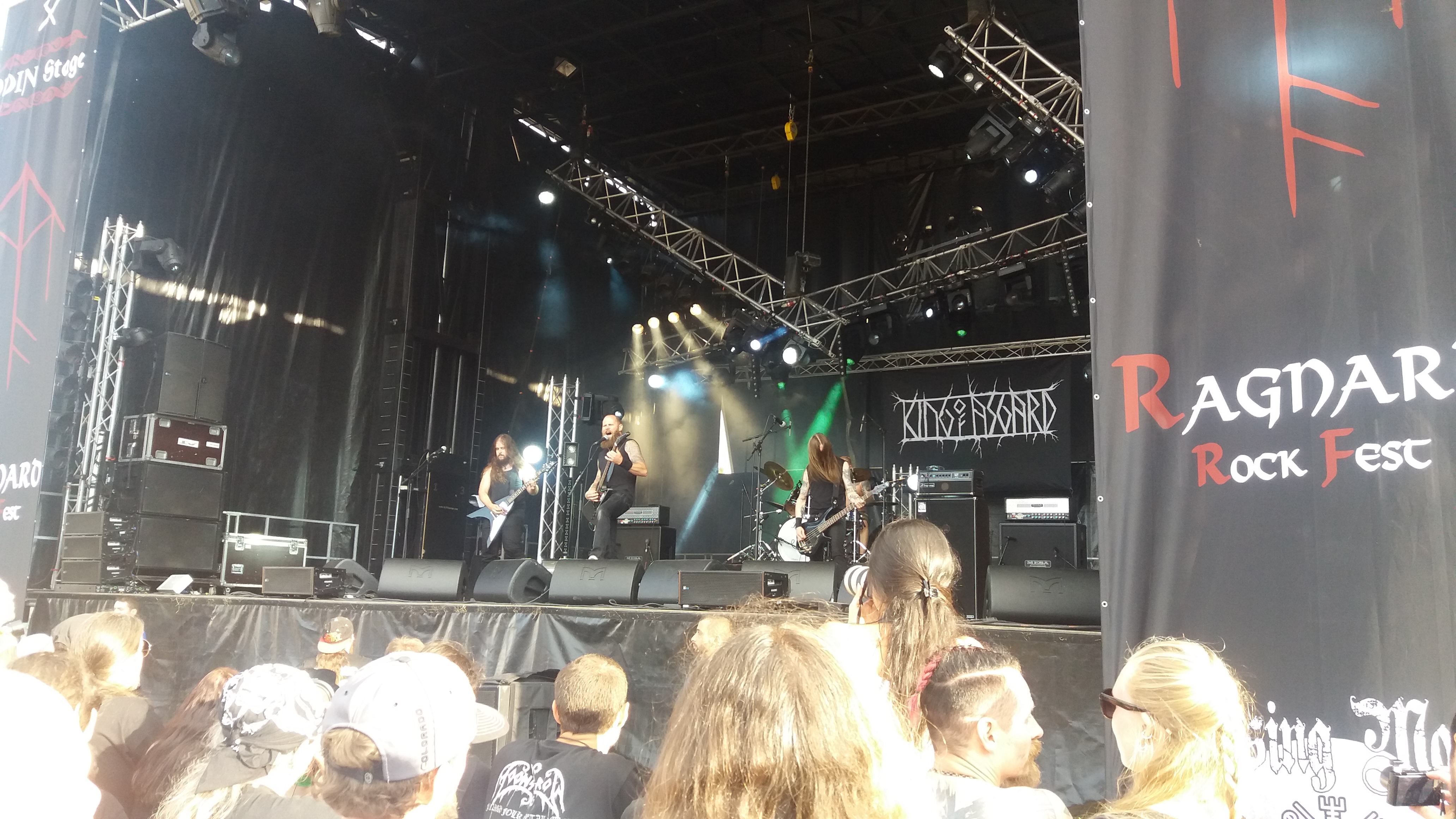 The following bands played at Ragnard Rock Fest at the Heim Stage: Kaunan, Percival, The Moon and the Nightspirit, Daemonia Nymphe, Trobar de Morte, Celtibeerian, Aq Bure, Les Compagnons du Gras Jambon and Acus Vacuum.
The quality of the sound at all the stages was fine. They did a good job, and we barely needed earplugs. Ok, a short review about some bands we have seen.

The Nordic Folk band from Germany Kaunan played at Friday in the afternoon. They played at the Heim Stage surrounded by the battlefield, market and Viking camp, exactly where they fit. The folk sounds were enjoyed by all who were sitting in the grass relaxing in the sun. A really nice show for a summer day while you feel like you live a 1000 years ago.

In the evening, the Irish Folk metal band Cruachan, opened their show at the Odin Stage with The Sea Queen of Connaught of their latest album Blood for the Blood god. Since the female vocalist left Cruachan, they rarely have a female vocalist on stage. This makes Cruachan harder and actually better. It’s time that Cruachan starts to record some oldies without female vocals Back to the concert! The show was good. The audience went crazy and enjoyed the newer and older songs – like Ride On – they played.

Faun was headliner at the Odin stage at Saturday evening. We know Faun as passionate musicians, with their German Pagan roots. They started with the danceable Andro; A beautiful, instrumental classic. Their performance, their act is decorated within details. They look like wise witches from the old woods. And Oliver rocked the stage with his Swedish Nyckelharpa, made a lot of contact with us, the audience. But for me, unfortunately, after a couple of songs, I got annoyed by the female voices. Too much in the same pitch. 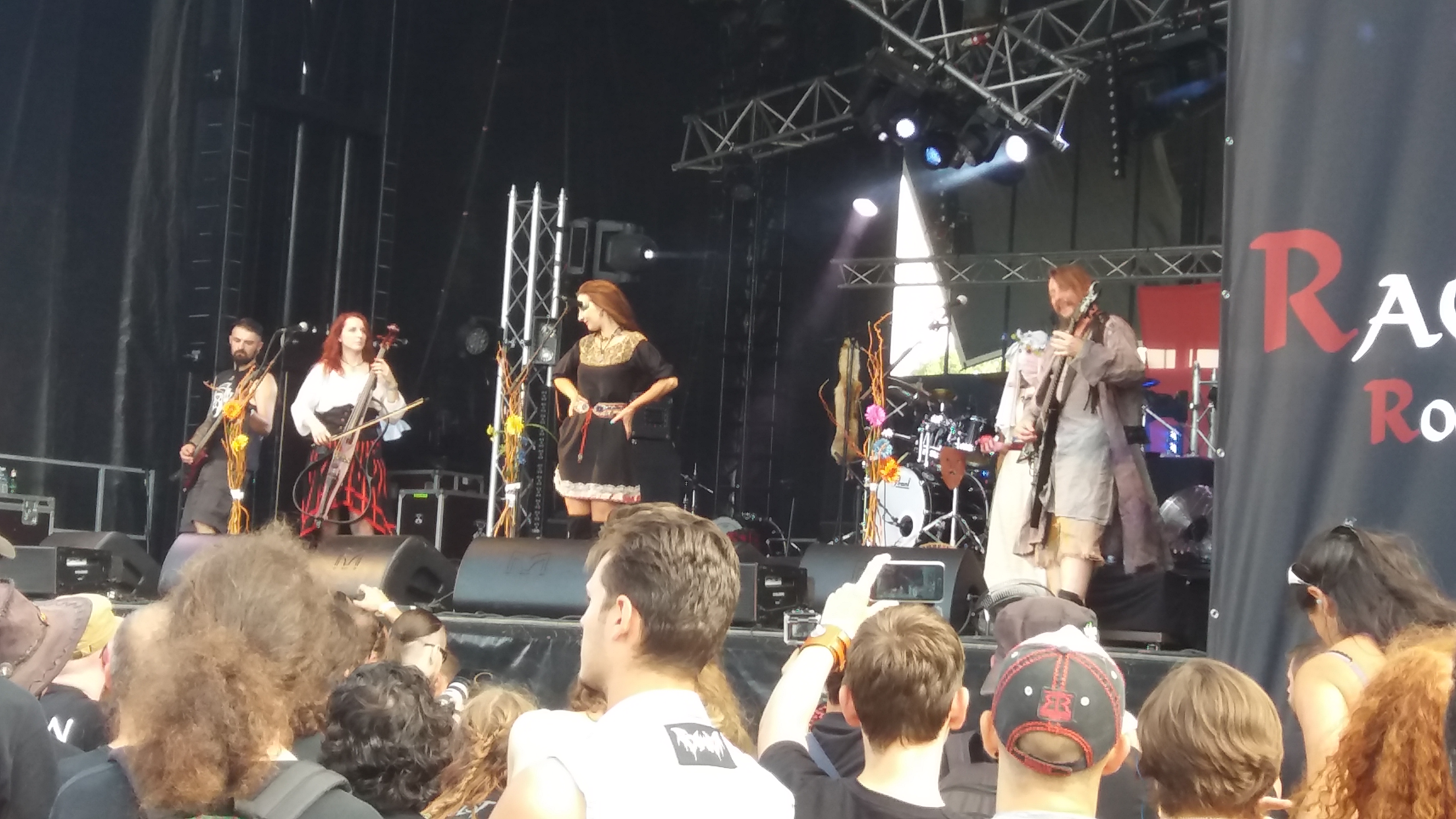 At Sunday the Polish band Percival Schuttenbach played at the Odin stage in the afternoon. They make, like they say themselves, New Wave of Polish Heavy Folk music and use different female vocals. We would say that it really refreshing in sound and the Polish lyrics made it complete. Their podium presentation was good and they had good interaction with the dancing fans.

Our Dutch friends of Heidevolk were headliner at the Thor Stage on Saturday evening. They played new and older songs and opened the show with Winter Woede. From the first tones on the audience went completely crazy. It was one big party in front of the stage and Heidevolk had good interaction with the audience. In the middle of the show they played their new English song Vinland, from their last cd. Of course they played their hit Saksenland and ended with Vulgaris Magistralis.

Our little Greek friends of Rotting Christ joined the Odin Stage Sunday afternoon. And wow, they kicked ass. Nothing more to say. The guys seemed to be in a good shape, with a bombastic full sound. I think, as always.
The audience was, even the last day, motivated to create a circle pit by themselves and one by another were lifted into the air, crowd surfing towards the stage. What a great energy. It was fun to be part of the audience, the vibe was contagious.

Ragnard Rock Fest is a small festival, what they organized totally fine for a second time. The atmosphere and bands were absolutely amazing. Go on like this and see you next year Ragnard Rock Fest!