By Wouter Balk and Sam Riffle
While others may already have been gearing themselves up for Christmas, we celebrated one last weekend of demonic darkness at De Mortem et Diabolum, a two-day indoor black metal manifestation at the Postbahnhof Club in Berlin. This festival concluded what has been a year of some intense head-banging-while-reporting for yours truly, unfortunately with a slight sour aftertaste upon hearing of the attack on Monday evening afterwards. Our thoughts are with those that have suffered one way or another from this tragic attack. 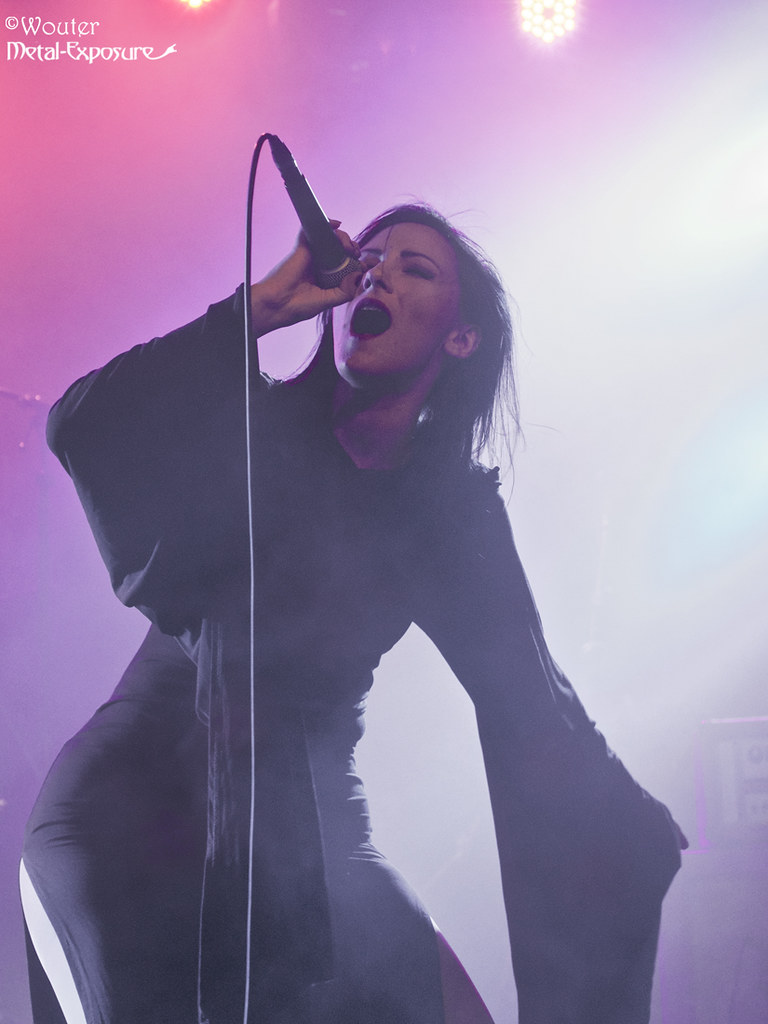 The honor of opening the festival on Friday was given to Witch Ritual, a blackened/occult constellation from Berlin. Their style is hard to describe, although occult rock with doom and blues influences would cover it generally. Their performance was an enthralling experience with the sensual yet distant movements of singer Jacri, who did a splendid job of becoming part of the art with her flitting black dress. Her voice was a very pleasant one to listen to, just bordering on the raw edge. Not so much fast riffing, blast beasts or tons of aggression, but rather an enrapturing if still down-to-earth rock sound, and therefore maybe a (pleasant) exception from the general line-up.

Hailing from Poland, Outre are a perfect example of why attending De Mortem et Diabolum always pays off: this festival offers a curated selection of incredible black metal bands that might not otherwise cross your path. Most members of the Metal Exposure team missed Outre’s performance at this year’s Dark Easter Metal Meeting in Munich because the tiny venue was already packed solid by the time we’d checked our coats, but Wouter and I luckily had the chance to rectify that mistake now – and boy, were we happy about that. Outre delivered savage, in-your-face black metal that was simultaneously diverse and melodic, with unpredictable, almost progressive rhythms that held us in rapt attention. The frontman channeled the band’s impressive energy straight to the audience, and the crowd definitely picked up what he was putting down. He even got a bit of a laugh out of us by ending with, “Thank you, Berlin. We hope you die soon enough.” I thoroughly enjoyed Outre – so much so that I ordered a t-shirt and their latest album, “Ghost Chants,” after the festival – and will definitely be keeping an eye out for their next gig in the area! 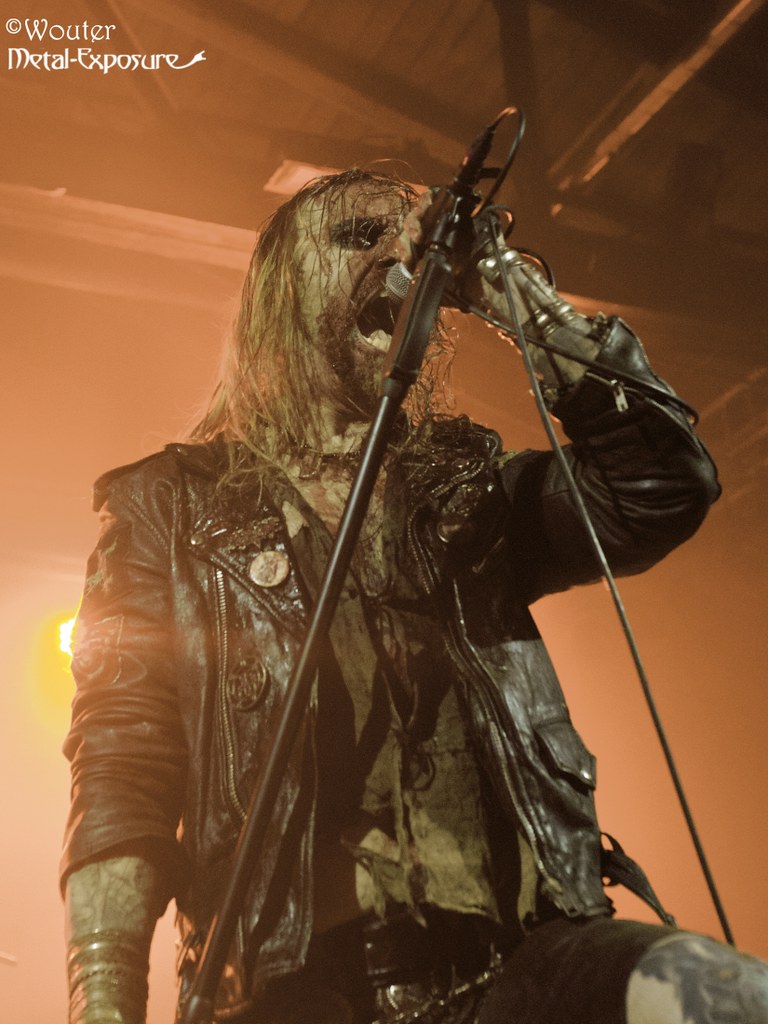 After the change to the blasting and groovy sounds of Outre, it was time for something slightly more effective in its swinging simplicity: One Tail, One Head (Norway). Well, what’s in a name? Their rock-n-roll influenced brutal black metal, with its axe-swinging bass-laden sound, did wonders for waking up after the long nighttime bus ride to Berlin. The aggression by front man Luctus emanating from the stage was both audible and visible; he made for a very convincing (trve) hateful appearance. All though still not my personal favorite, due to their staccato vocals and me not really getting their groove, this was one of the best played shows I’ve seen thus far of them.

The party of fast-paced aggression continues with Valkyrja (Sweden). Starting off in a cloud of dust from Rogier Droog (NL), it was time for some proper head banging. Their first two songs (Catharsis and The Cremating Fire) sounded a bit off timing-wise, maybe due to the long reverb used for the vocals. This was however fixed in the subsequent songs, leaving me wanting for more as Oceans to Dust heralded the end of the show. The guitar work of these Swedes is truly some of the best fast riffing artistry I saw during De Mortem; what an incredible wall of sound! 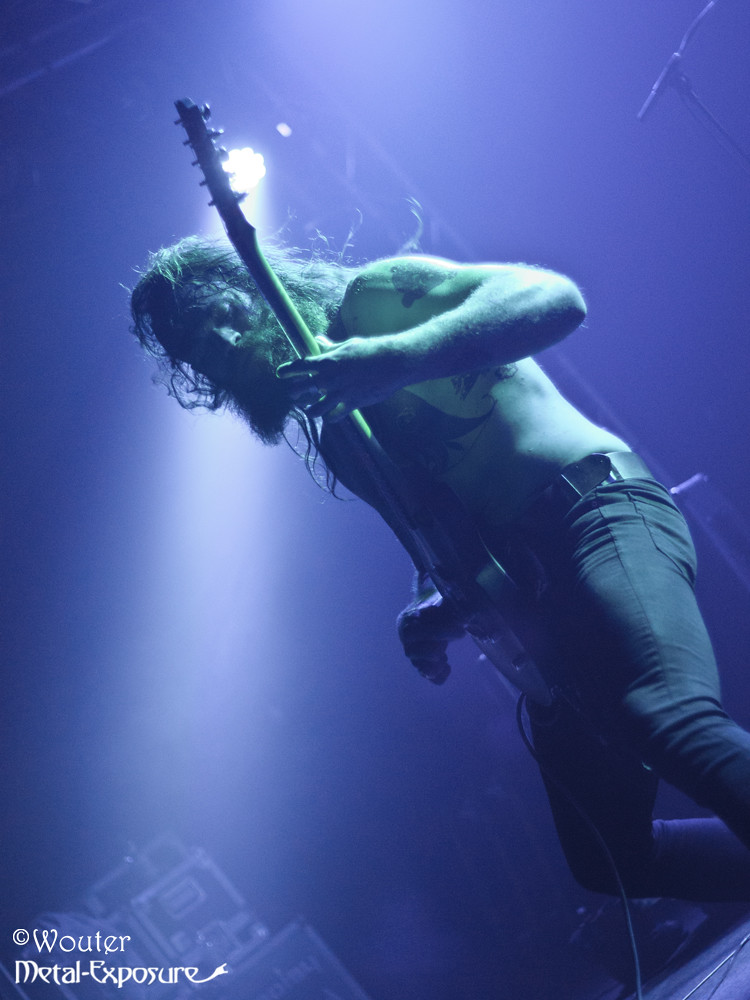 After our short dinner break, Bölzer made the stage. Having just released their full-length Hero (read review here) the show started off with album opener The Archer. A combination of enchanting fast riffs, played by KzR on his 10-string, with drums (HzR) that are played both aggressive and laid-back in the floating riffing… Bölzer makes for a mesmerizing sound. All the more so as this was done with just one guitar, yet producing such a gigantic sound. The (Lemmy reminiscent at times) vocals and general sound was good, something I find an achievement also of the venue with such an old building, never designed for concerts.

Batushka, whose Eastern Orthodox-inspired brand of black metal has rocketed them to massive popularity within the scene in just one brief year, were booked for Friday’s hour-long headlining spot… despite the fact that they’ve only released 41 minutes’ worth of music to date. That was really the biggest flaw in the band’s set at De Mortem et Diabolum this year: It was way too damn short (well, that, and the fact that the vocals – arguably the most powerful part of the band’s music – were far too quiet in the mix. And there was also that massive delay before they took to the stage…). But the show, which comprised the band’s entire album “Litourgiya,” was like a delicious, delicious appetizer – Batushka’s impressive stage presence, stunning visuals, and thunderous sound just made me want more, and I wasn’t the only one. Many people left the venue shaking their heads, clearly dazzled, but disappointed that the experience hadn’t lasted longer. Batushka will definitely make a kick-ass headliner once they’ve released a second album; this time, though, they left many of us feeling ever so slightly shortchanged. 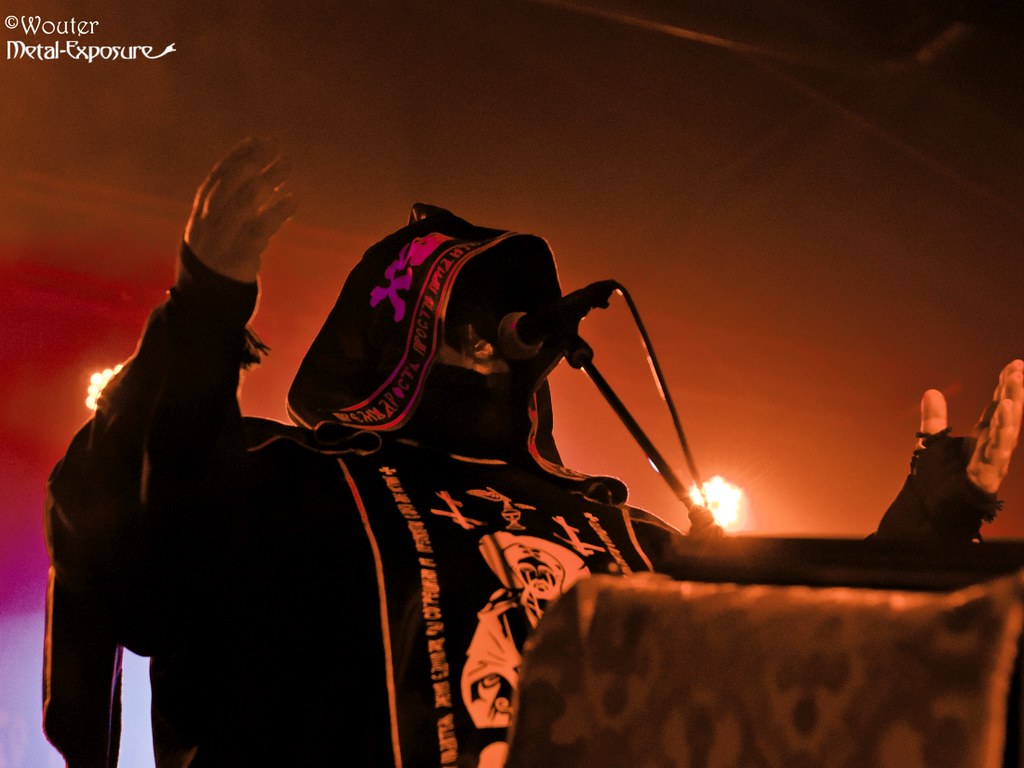 Saturday
After a much-needed night’s rest and slight detour to one of Berlin’s many coffee bars, we made it back to the Postbahnhof Club to witness the opening act of day two: Thorybos (Germany). A mix of metal-core influenced drums and vocals, although the main genre I would still consider black metal. And although the band made use of two guitars, the sound came off as bit dull and monotonous. The frontman was one convincing bone-chain-adorned puddle of hatred (at times also towards the audience, something I did not entirely appreciate). Not really my stew, but nice for a warm-up act to wake up to! 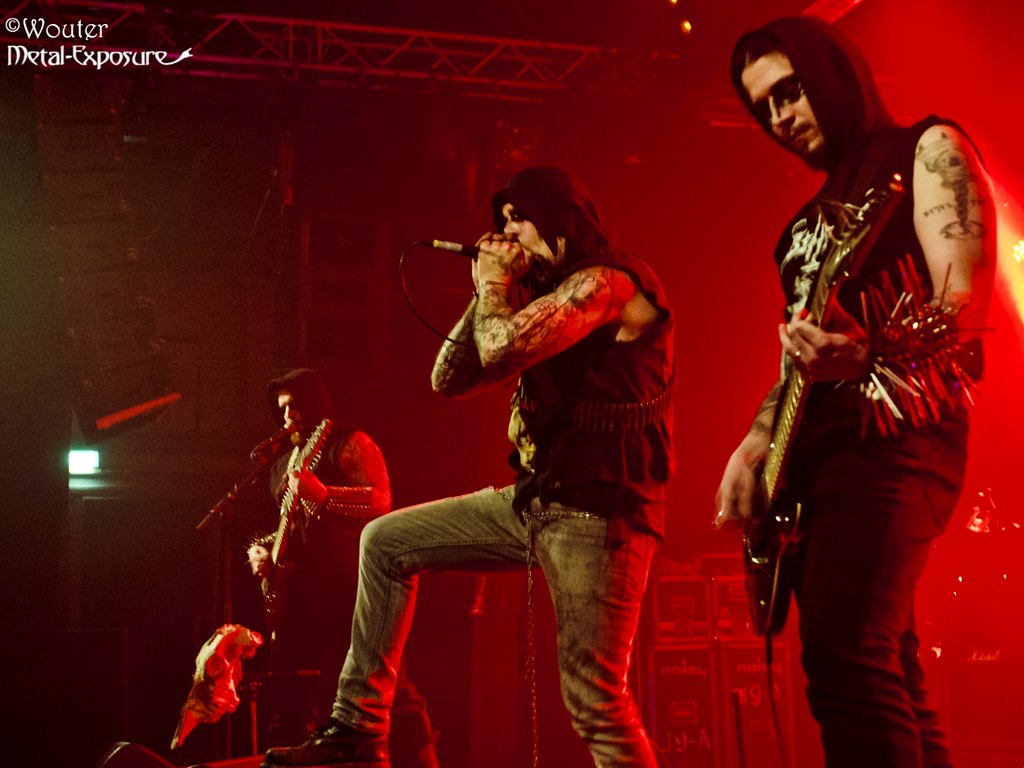 The Italians from Deathrow were next, which once again affirmed my belief in riffing, which is something rivaled by few. With just one guitar, they managed to pound out chugging lines of (melodic) aggression while keeping a groove that was easy to get into. The vocalist also managed to entertain a lot, both with his quality grunting and drawn-out screaming, as well as his animated stage play. The audience picked this up clearly as well, although this may also have been due to the many beers that were already poured and drank during the still young afternoon.

Albez Duz were the third band of the day on Saturday, and while they’re based in Berlin, this five-piece occult doom metal outfit is quickly becoming a hot ticket beyond the city limits. I first heard about the band when a friend of mine joined them on guitar (hi Julia!), and while doom isn’t generally a genre I spend a lot of time listening to, there’s something about Albez Duz’s complex, heavy riffs and frontman Alfonso Brito’s unique combination of growls, shrieks, and flawless clean vocals that grabbed me right from the start. I had seen them live once before, about a year ago, and I really enjoyed that show, but their performance at De Mortem et Diabolum blew that gig out of the water; they absolutely dominated the stage. The band released their third album, “Wings of Tzinacan,” this past fall – the first with their current lineup – and you can see and hear how invigorated they are on stage. Alfonso knows how to captivate an audience, and Julia just. fucking. shreds. The 45-minute set was a nice mix of old and new songs, including memorable numbers like “Fire Wings,” “Our Lord, the Flayed One,” and “Reflections,” all of which sounded even more incredible live than on the albums. Without question, Albez Duz put on one of the best shows at De Mortem et Diabolum; they are a must-see! 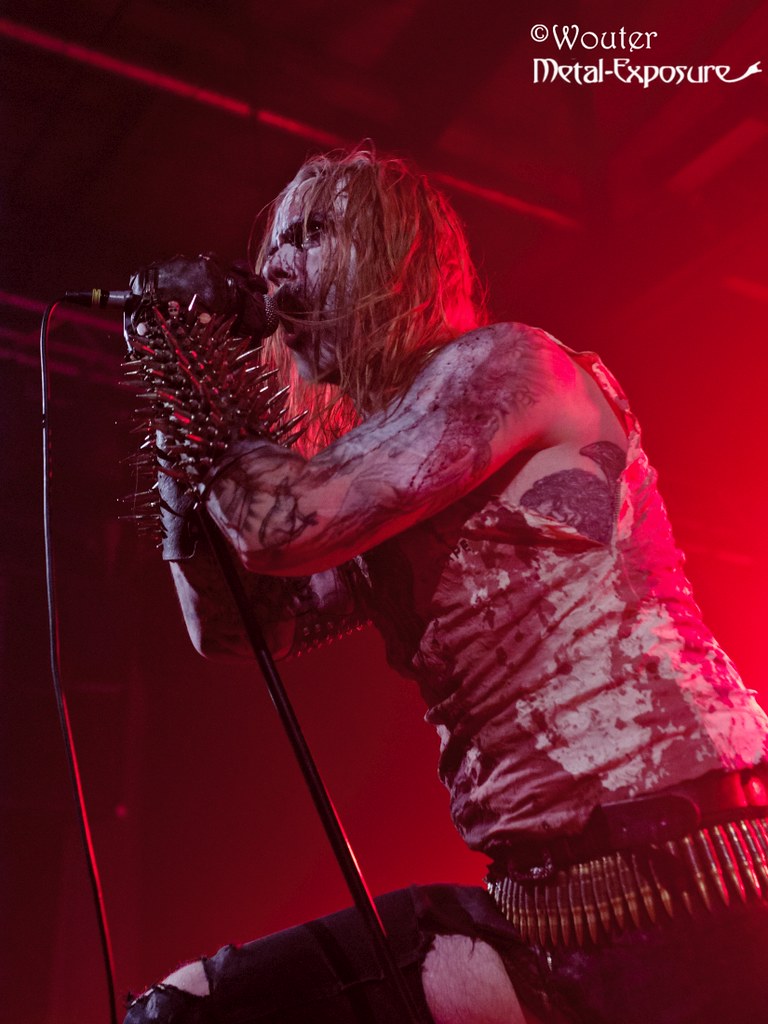 Where Albez Duz was the pleasant and more intellectual surprise of the day, Darvaza was that in in terms of overtopping aggression and fast black metal. Holy f*cking shit, even with their overlapping style with respect to Deathrow (also in some of the band members), these guys managed to put down a sound faster than a French TGV, tighter than your too young sister-in-law (so hands off and pardon my metaphorical French) yet bearing more hatred than Marduk! This is how I want black metal to sound, on a day when one hits a traffic jam after everything seems to fail and you long for a Howitser-type artillery gun! Unlike some bands within this genre using two guitars, this band actually sounded better, with their mixture of well-timed power chords while the other focused on melodic riffing.

Dead Congregation from Greece made the stage with their heavy-as-leaden-shit vocals and likewise bass plays. A bit of a doomy sound, with monotonous played out sections here and there, which did well for the band’s sound, if not completely my personal taste. Though I have to say, it never got really boring, as both the music and the band members managed to pick up the pace and provided for an entertaining and very enlivened show. 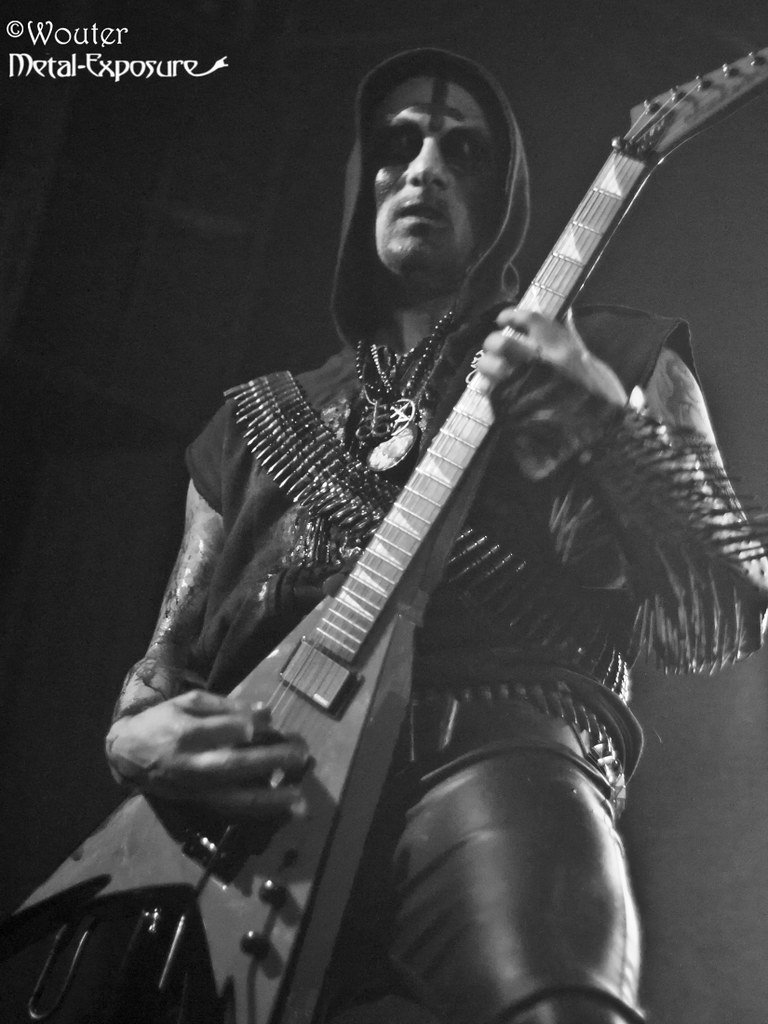 Even darker, goat-laden satanic tunes were brought forth by Finnish black metal entourage Archgoat. A mix of old-school black metal modernized slightly with the use of samples and keyboard. A very much no-nonsense, typical Finnish black metal rooted in 90s music and themes. Although played well, the music was on the simplistic side to me and became a bit boring after the first couple of songs. Their cult display offered an entertaining vista, although we’ve had similar displays throughout the day. Personally, I am a bit beyond the Satan-spikes-goat-cvlt black metal, as there are so many more ways to express darkness. However, the audience seemed to be very enthusiastic, making it a proper headliner of Saturday. 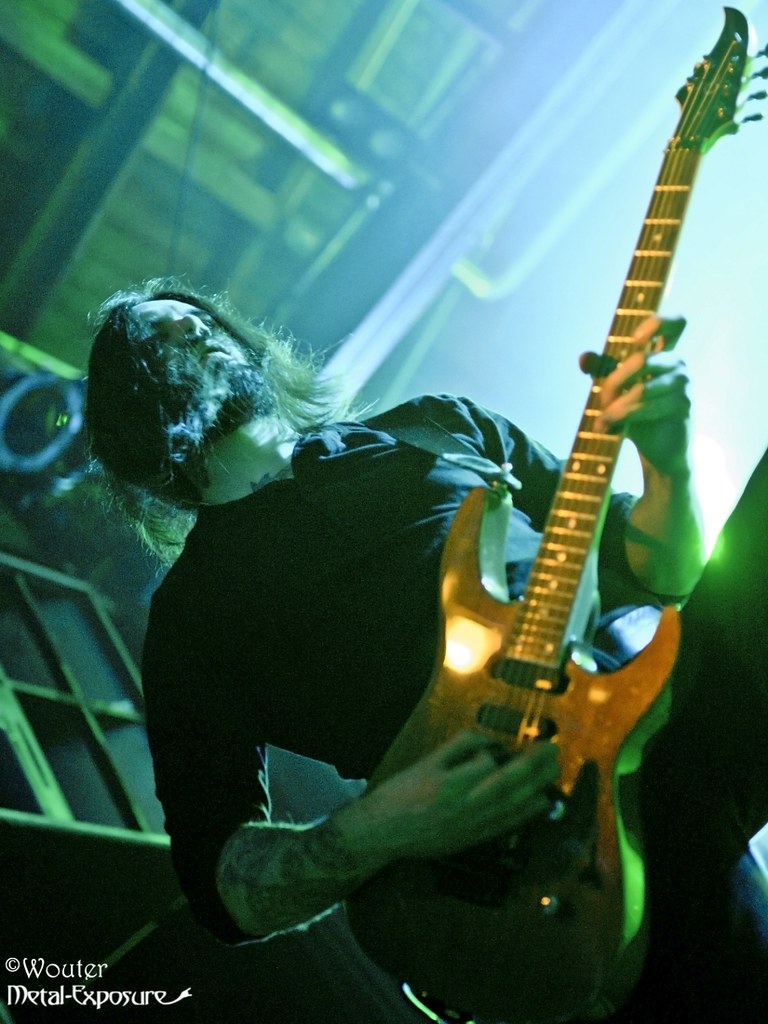 The closing act was one of my favorites, heralding the English voice of atmospheric black metal these days: Winterfylleth. Although definitely not my first show of these Britons, this one ranks among the best yet. Maybe it’s because they were the closing act, or maybe it was the comfortable feel of the venue (small enough to be intimate, large enough not to smell each other’s armpits) or maybe it was the relentless conviction Winterfylleth seems to be able to emanate from stage…well, it was a bit of everything, I guess. Of course, they had The Dark Hereafter to promote (read review here), which helped set the mood for a darker and properly atmospheric set, to my liking. Although kicking off with The Svart Raven, the title track of their latest was also presented, with a mighty and massive combination of vocals and riffing. Must-play A Valley Thick with Oaks brought a lot of fans singing along to the chorus “[…] a proud spirit remains, in the heart of every Englishman […]”. A spot-on performance once again, cheers guys!

Too soon the signal for the last beer sounded and De Mortem et Diabolum was over – a laudable festival for the sound quality in such an old building, the atmosphere, the ability to relax in between shows, have a beer or shop around for the rather well supplied merchandise. It wouldn’t hurt to have a bit more variation from black-aggressive-style, with more bands like Albez Duz or Winterfylleth, but other than that I had a great time at the Postbahnhof, and would gladly come back for another round next year.