A sold out and potentially the wettest single day festival of the Dutch summer, your Metal Exposure crew went out to face the elements and report on the 2015 edition of this local but infamous death/thrash underground festival. Well, elements to blame, half a festival. 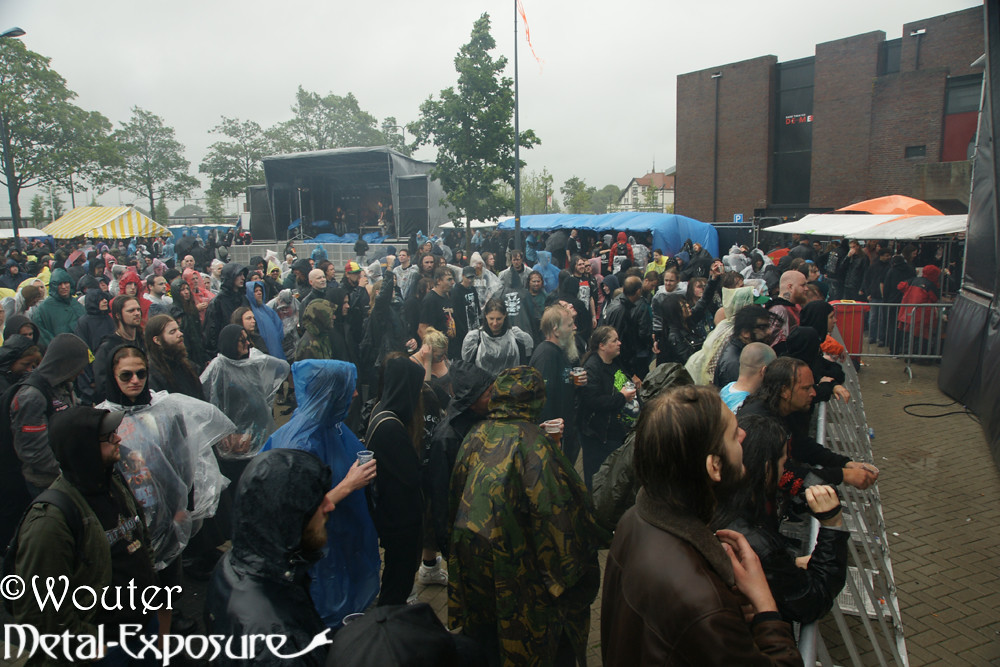 This years’ Stonehenge Festival (Steenwijk, Netherlands) was sold out again, and even though the weather forecast was bad, we all arrived there to see the bands and have a good time. It was held on a different location, on the town square right next to the railway station. It was a bit larger, but due to the set up, both stages were visible from every corner, as well as from the re-instated beergarten! We definitely missed that last year. A big improvement was also not having to leave the terrain to grab something to eat or buy merchandise. The day started pretty good and I guess we all hoped the weather wouldn’t change for the worse. Even when it started to rain people didn’t really seem to mind, even though the festival would suffer from what would become worst storm ever recorded in July.

The first band we were able to see was Sabiendas (GE), who sport a bit of a standard but very good brutalized death metal sound. Blasting beats and grunts take you one a tormenting trip that is ‘Worse than Death’. Or to quote the front man Jan: ”We bite off your heads to shit in your necks!”. Definitely a quality (live) band. (WB) 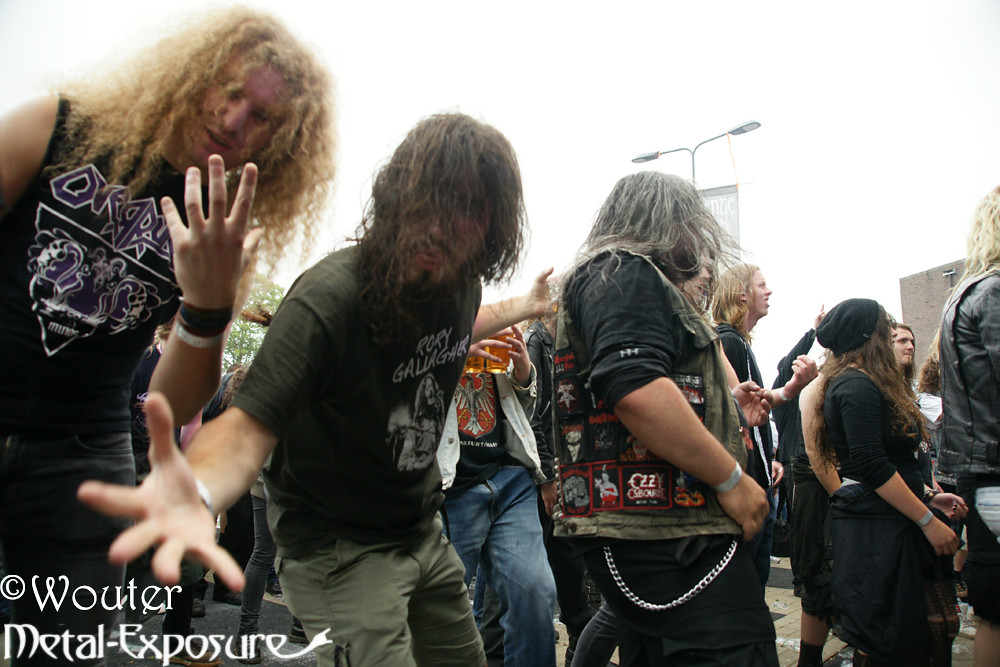 I was curious about Smothered from Sweden, who played at noon. It’s a fairly new band, with only one finished full-length in their career so far. Their second one is on its’ way as they played songs of this follow-up on Stonehenge. Their show was rather static however. Even though musically it is quite aggressive death metal, headbangers were present at the stage front, so it wasn’t bad at all. (WH)

During the show of Inquisitor it started to rain unfortunately. Dedicated fans remained in front of the stage, since the band quite recently re-united, while others sought shelter from the rain. Their old school death thrash was nicely aggressive, but I couldn’t get past the high pitched shrieks of the vocalist’s replacement. Because of the wind it sounded a bit like a mess at times, so it could have been a lot better due to the circumstances. (WH) 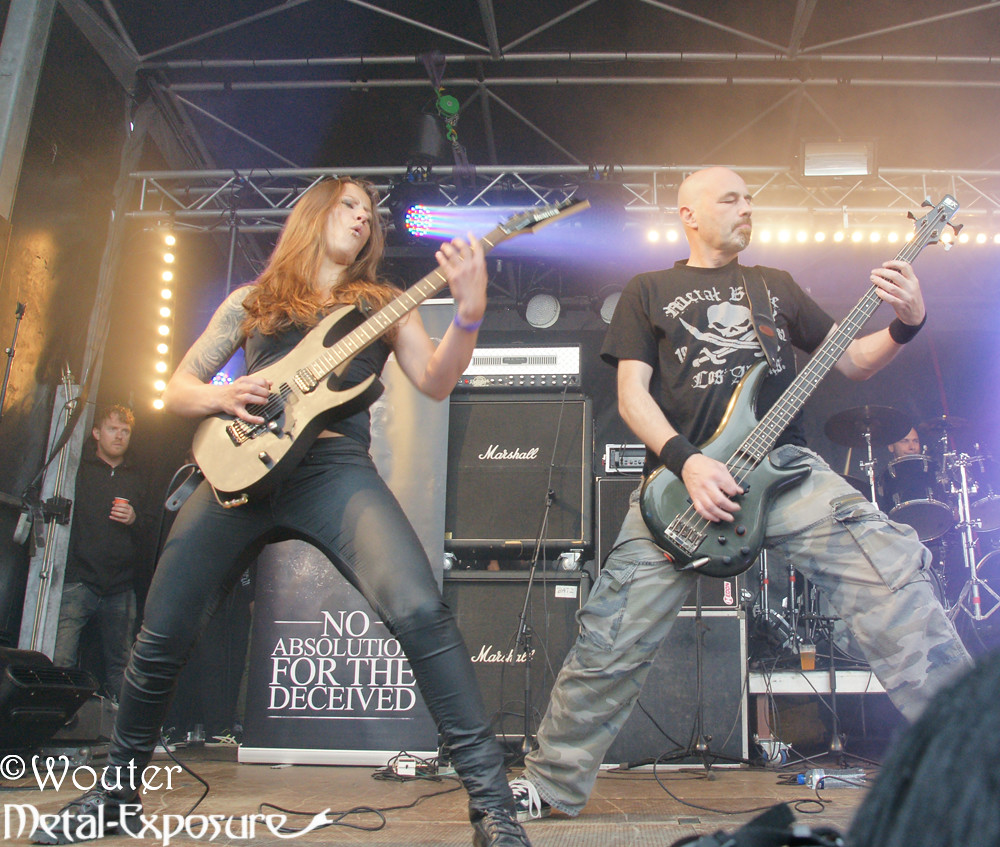 Dictated, formed by two female guitarists (Yessica Otten, Sonja Schuringa) made for a change in the normally male dominated (death metal) scene. Energetic show by York Keijzer on vocals and well played, if a bit off my taste given the metalcore influences. Together, Yessica, Sonja, York and bass session member Henri Sattler (God Dethroned, Winter of Sin) the band played their respective asses off on stage. (WB)

Hirax performed a very lively show as ever, with Katon W. De Pena (vocalist) unable to sit still or stop playing the wide-eyed fanatic, engaging the public into the music. Meanwhile the band was riffing like maniacs, even after the many line up changes Hirax has seen since 1985 and their reunion in 2000. This motivated some of the audience to go crowd surfing, which deserves a praise in this weather and concrete tiled floor! (WB). 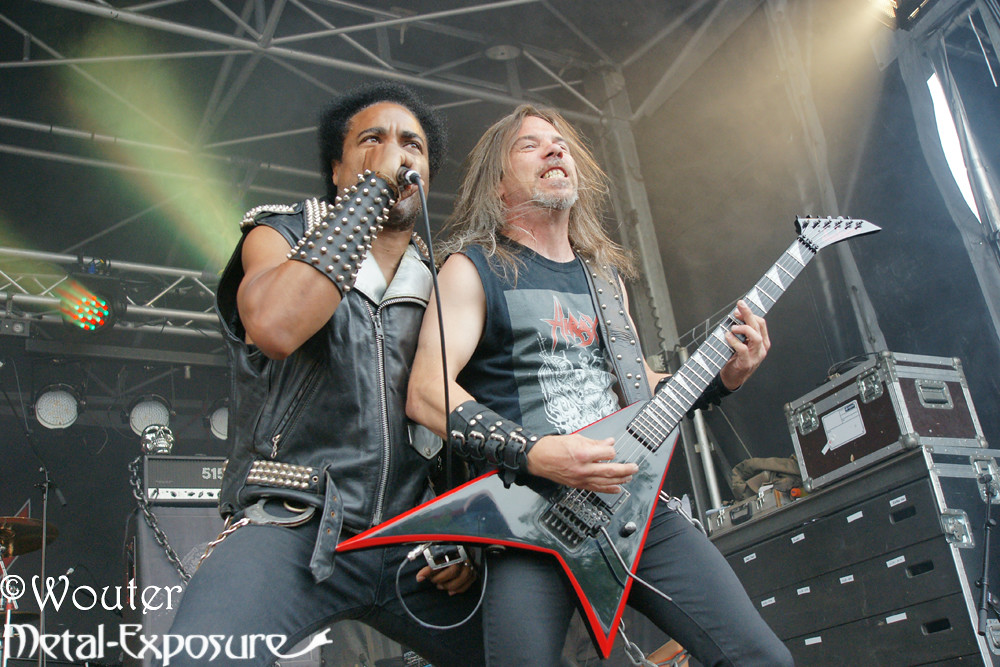 Diabolical, up next, is a technical and very good sounding quartet playing a blackened death. They use three vocals, which adds a lot to the sound and liveliness of the band. Currently they are working on a new album of which they also played a song. Not afraid to also have some melodic and slower parts, these guys for me were one of the better acts (WB).

From a distance you could see a bunch of slamming hands and even a small circle pit formed. This means Ingested was performing. These brutal death metallers have been around for approximately a decade, so they know what they’re doing. They get the crowd going mostly during the breakdowns, which are in great numbers anyway. And the band easily moves along with the rhythm besides the vocalist who is the only one actively present on the stage. (WH)

Next up was another brutal death metal band, also from Germany. Cytotoxin has a much more technical approach. The two anonymous guitarists nod their heads with their gas masks on while the vocalist is gesturing, I guess, what his incomprehensible gutturals mean. So it might look odd what’s happening on stage, but musically it was really good, especially the vocals. (WH)

During Hideous Divinity, the weather got worse and progressed into extremely bad. The festival was paused for an hour, but some damage was already done: bands cancelled (Devin Townsend) or delayed in traffic or flights (Vital Remians, Brujera), the stages and electronics got wet, stands were breaking down because of the storm…

After the break that lasted an hour, the organization was forced to cancel the rest of the festival, as it was ‘simply unsafe’ to continue (bot stages were too damaged). A sad ending of what should have been a terrific day and night for not just the visitors, but also the bands, volunteers, traders and of course the organization. However, we all managed to have a good time and see some good bands during the day, despite the weather. We are happy to hear that, even though the organization took a financial hit due to the cancellation, a 2016 festival is already planned. Kuddos for keeping up the work, we will definitely be there next time!