By Wouter B.
In an otherwise peaceful and rather quiet part in the upper North Western reaches of the Netherlands, a killer line-up indoor festival was held on Saturday the 12th of September. With a billing consisting of Impaled Nazarene, Thulcandra, Saille and some local talent, Dystopia, Doghouse Gallows and Ancient Monstrosity, most extreme tastes were covered. Besides that, Mother did the cooking! 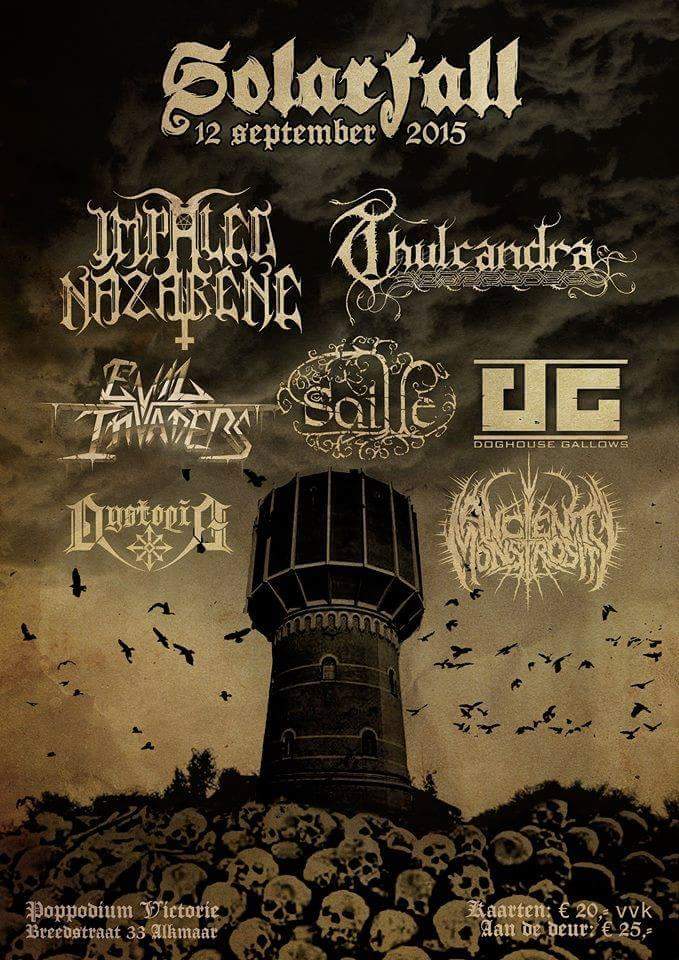 The city of Alkmaar (known for, well yes, cheese trade…) was temporarily and locally invaded by a collection of long haired talent. Set at the Podium Victorie, which for the first time organized a full day and evening of (extreme) metal. Not extremely busy, but a very close and underground feeling with direct contact with the bands and music made this a great first time.

Kick-off band Ancient Monstrosity (Heerhugowaard, NL) played an energetic set of death metal, with a very enthusiastic front man (Thomas). Not being familiar with their work, they still managed to entertain with very good drums and riffing. The audience (as far as present that early in the day) needed a bit of warming up, which did not stop Thomas from jumping around on the stage. Kudos for the guitar player, still managing to play a whole set, including solos despite his badly injured left index vinger.

The sound check of the next band already promised something more ominous and black (much to my liking!). This indeed turned out to be the case with Dystopia (Den Helder, NL), what a great play! In the spirit of true blackness, no stage lights were used, just single small bulbs for each player. The vocals and guitar riffing by Dennis Onsia and guitar work by Rick Jong was very well done and made me slightly reminiscent of Dissection at times. However, these guys showed much more variety in their music by incorporating many styles (doom, done, post-black), which could be a bit overwhelming to digest. Maybe a bit ‘less is more’? Be sure to watch out for them when their (summer 2015 recorded) full length will be released. The audience also definitely loved it, shouting for and receiving an encore.

Our Southerly neighbors Saille also made it to the Northern reaches, to play their (special) black metal. Playing a mix of blasting beats, keyboard assisted manic riffing and skilled technical guitar work, these Belgians again showed real quality. Their latest album, Eldritch (inspired by the works of H.P. Lovecraft) was promoted with opening song Emerald and the majestic Walpurgis. Older songs were not neglected either, like Sati. Although I’ve seen them a couple of times already, the technical level of this band never bores. 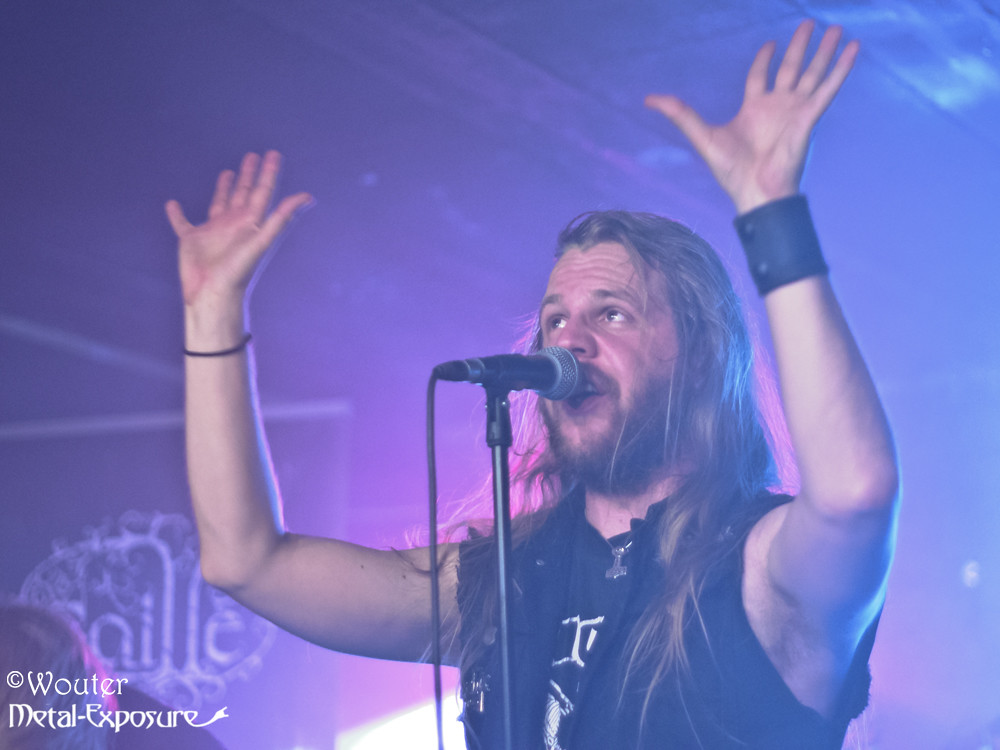 Instead of having the usual junk-food, Solarfall organized a ‘mother’ cooking some very descent and healthy plates. While I am no food purist and indulge in junk food every once in a while, this was a very welcome change. Kudos, well done! Unfortunately, Antropomorphia had to cancel due to the drummer having a fever. This however meant Evil Invaders playing a bit earlier. Wow! These (likewise) Belgian manic speed-thrashers rolled straight over us with their extremely energetic music from the lower depths of the eighties hell! What a stage performance, while maintaining an extremely tight play. I instantly regretted having missed them at PartySan, but this intimate indoor fest made it all up. 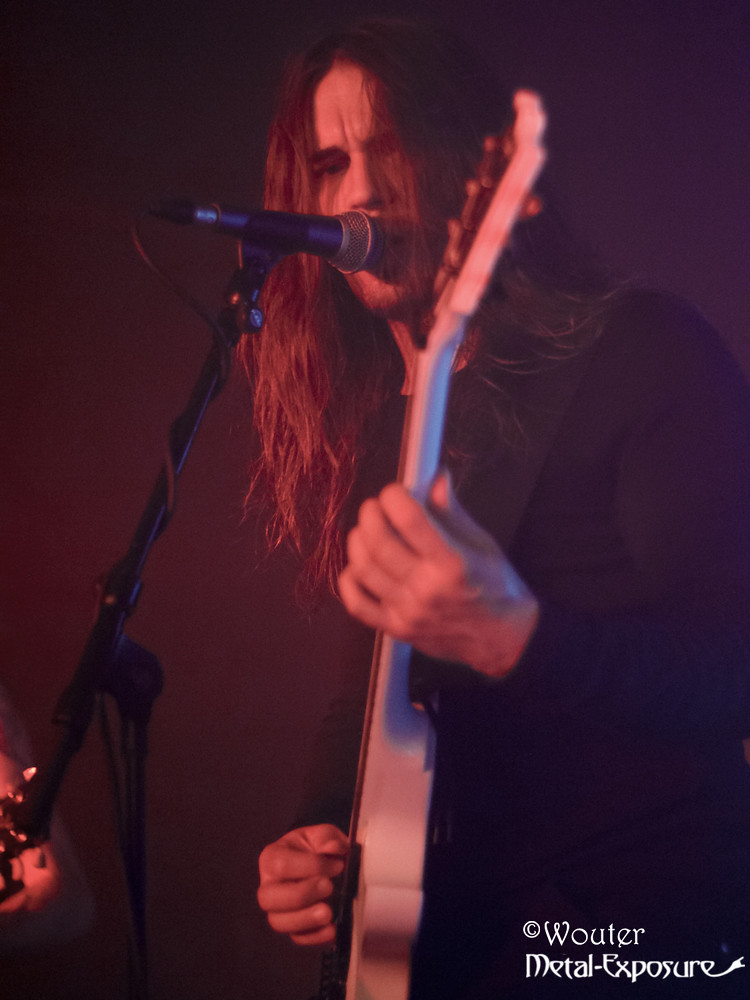 German four piece Thulcandra were my evening favorites, as I very much enjoy their Dissectionesque sound and (lyrical) works. Currently they are promoting their third full length (see review), Ascension Lost, but began the show with Night Eternal. I assume this is a homage to co-founder and lost band member Jürgen Zintz, given the lyrics. Blasting Aeons of Darkness and Black Flags of Hate gave a real (mosh)kick to the audience, while Ascension Lost slightly more diverse tempo songs Demigod Imprisoned and The Second Fall also came avalanching down. Awesome guitar work by Steffen Kummerer and Sebastian Ludwig, if a somewhat unanimated stage play. But who cares given their great musical skills? Closing off was Finnish black metal legends

Impaled Nazarene. With just one guitar besides bass, drums and of course vocals, they managed to create an atmosphere of both extreme aggression and sadistic if dry Finnish humor. Playing a massive set of both old songs (Condemned to Hell, The Crucified) as well as newer material (The Flaming Sword of Satan), and of course their traditional ‘Goat’ songs (The Oath of the Goat, Sadogoat) the festival ended just as the name Solarfall suggested: aggressive darkness. 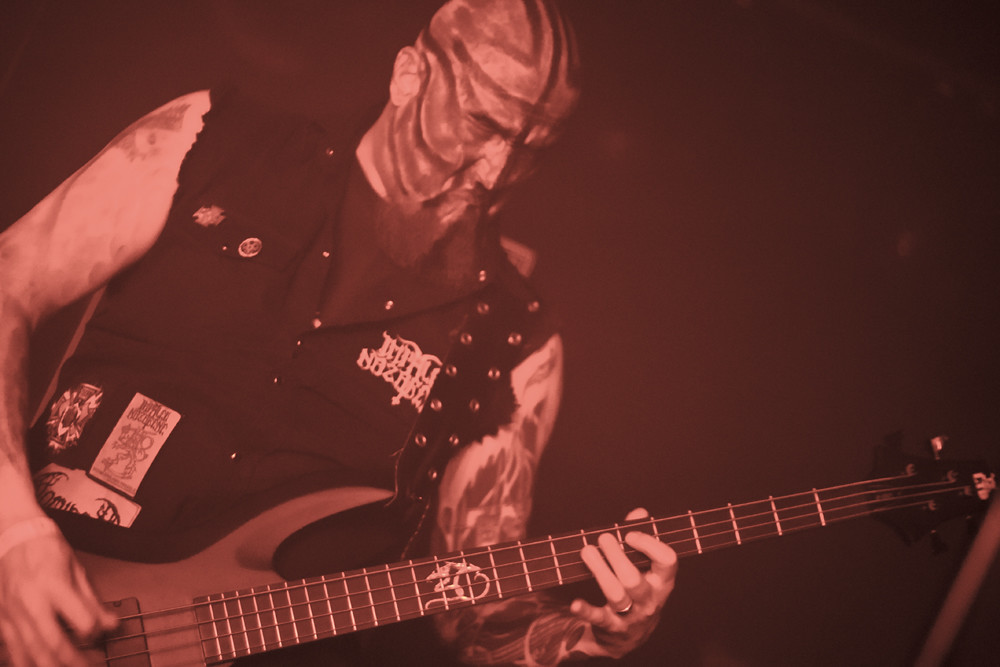 Well done to the organization, we need these small cosy indoor settings to keep the underground feeling alive!