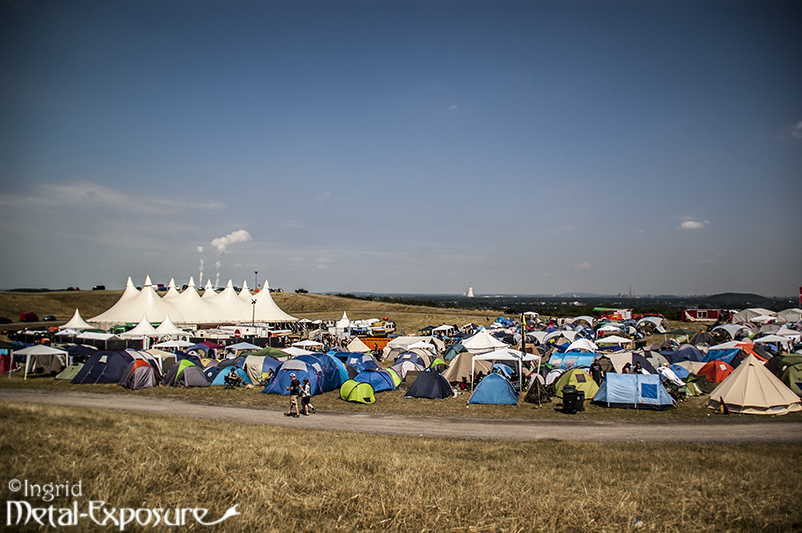 16/18-07-2015
Neukirchen-Vluyn, Germany
Report by: Rosa & Tabitha
Pictures by Ingrid (and a guest appearance from Tabitha and Rosa)

Sometimes you need a fresh perspective on things, be it on life, music or whether you should really have another beer. When it comes to festivals, a new set of eyes can point out things that veterans don’t even recognise anymore. Therefore this year, Metal Exposure brought Dong-newbie Rosa along to the famous hilltop-festival to do some reporting. Her musical preferences create a different appreciation of the bands on Dong, but the verdict of the festival was unchanged, and, in fact, confirmed! Dong is the best festival in the Ruhrgebiet and here you can read why! 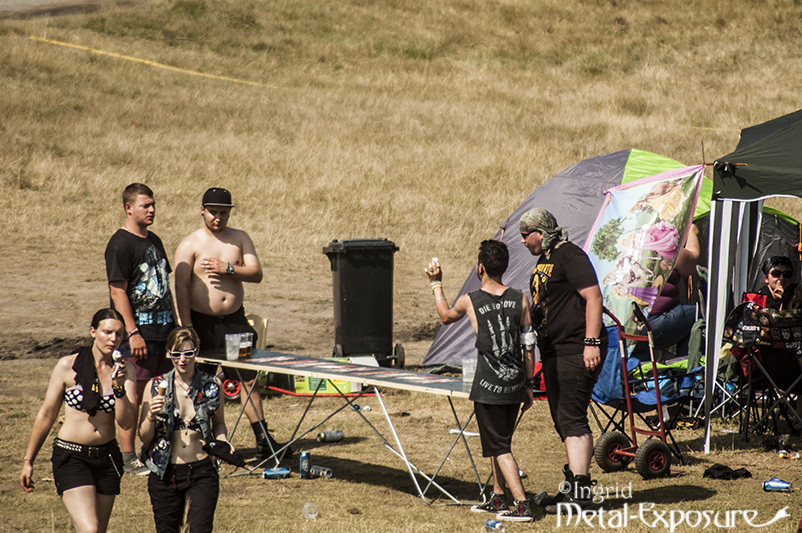 After taking the walk up the hill, setting up our tents and enjoying looking out over the festival terrain with a nice beer in our hands, we went to see the first band, Sunchair.

Even though it was very hot and a lot of people were seeking comfort in the shadow, the tent was half-full with people who definitely enjoyed Sunchair. Playing a nice combination of thrash, metalcore with a little postrock twist, they got some hips swinging!
The singer had great interaction with the crowd and the positive vibe definitely set the tone for the rest of the day.

After taking some time to relax at the tent and enjoy the view, we went to see Debauchery. It was obvious a lot of people definitely came to see Debauchery. Covered in fake blood, they stood at in front of the stage banging their heads to the fast, heavy riffs. Debauchery is unquestionably still going strong after 15 years and releasing nine studio-albums. Let’s just not mention that one copyright episode..

After Debauchery, The Black Dahlia Murder took the stage. Playing melodic death metal with some brutal death metal influences , very fast guitar riffs and the high shrieks and low growls of singer Trevor Strnad is a perfect fit for the music they play. 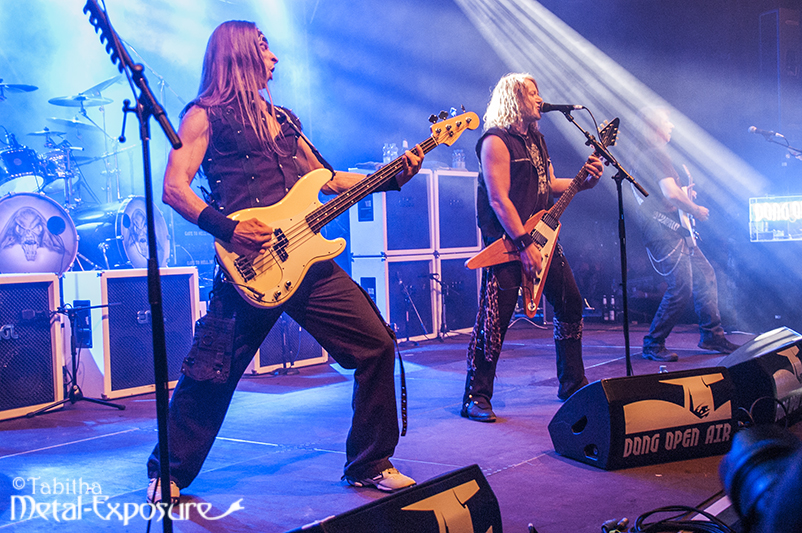 Last of the day but definitely not least were the legends of the powermetal band Gamma Ray.
Even if you don’t really like the genre, listening to the catchy tunes of the songs will make you bang your head a little. A huge part of the crowd was singing along and these old rockers put up a nice show!

After listening to their first and, for now, only album I was very much looking forward to seeing Gilgamesh. The clothes they were wearing were a good fit to the music they make, blackened death with some eastern influences. They started off the show a bit rusty and it felt like they really needed to get into it. After a few songs it got a lot better and they put up a great show in which the members of the band seemed really in sync. 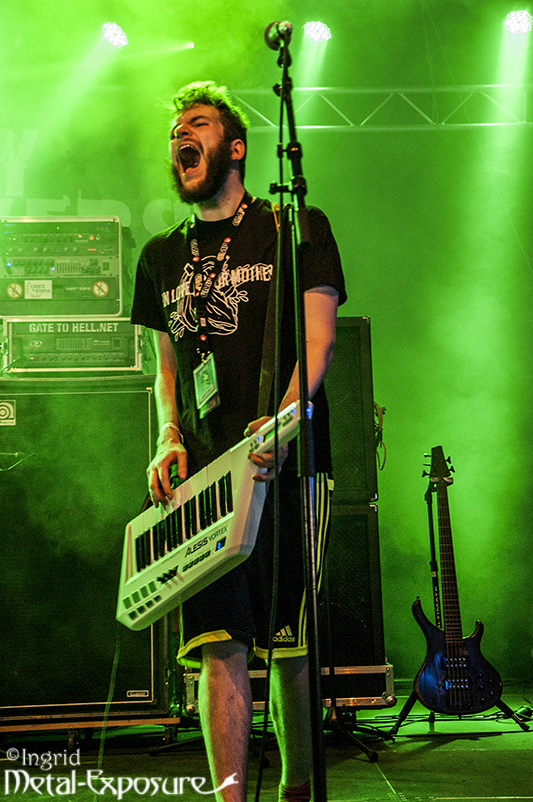 The Excrementory Grindfuckers made a party! While everyone was dancing around the foam cannon, the mix of German folk music, pop music and grindcore was blasting through the tent. Playing early in the evening, it definitely got everyone in the mood to party. It is a very typical Dong-band, fitting very well in the slightly wacky atmosphere of Dong! 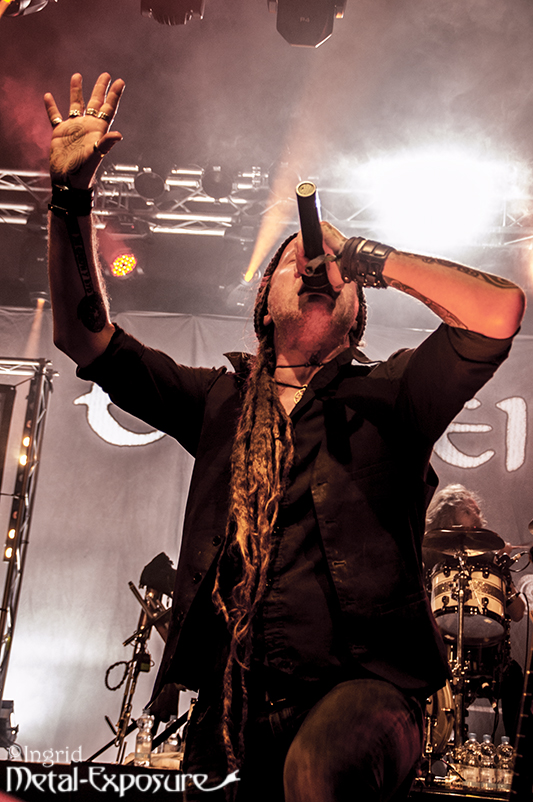 The members of Eluveitie are stage-veterans, and this you notice immediately. Not missing a beat, they were performing their arsenal of catchy pagan metal songs for an audience that filled the entire tent. Lots of crowdsurfers were making it a challenging show for security, but they handled it well. The atmosphere was great and the performance was excellent – a perfect headliner for this festival!

What a nice concert to start the day with! The guys from Wulfpack had absolutely no trouble getting the last bit of sleep out of your eyes. Thrash with fast riffs, a voice that fits the music perfectly. This got heads banging – the age of the musicians was shown to be completely irrelevant. A band to keep an eye on! 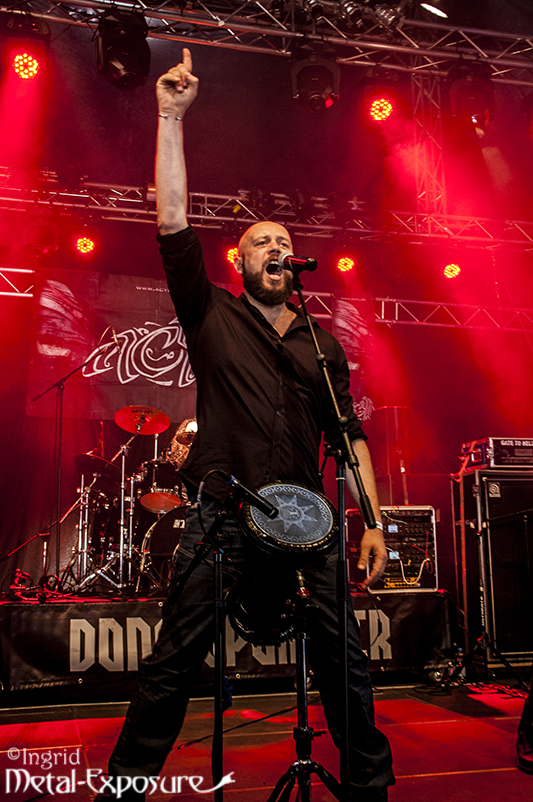 Next up was a band that we had not heard of before and were very happy to get to know better: Acyl. This French-Algerian band had actually already played at Dong in 2013, but somehow we had missed it. Not this time though! Ethno Metal, it is called – but in a way one could also call it folk metal (they are actually also playing at the Norwegian festival Midgardsblot, about which you can read here. The vocals and the traditional North-African instrument made the show catchy and interesting – something completely different from the rest and perfect for a lazy satuerday afternoon. More of this, please!

The next band we went to see, Mantar, consists of a drummer and a guitarist, and damn, do they make some heavy music. The interaction between the two men made it feel like you were at a small venue. If you wouldn’t know they were a two-piece you would think there are 5 men on stage. They put sludge metal to a whole new level.

But after Mantar, it was time for some German-Irish Folk-Rock with Fiddler’s Green. Long story short, it was an energetic show which made the floorboards creak – there was a LOT of dancing going on. Great, upbeat show with plenty of gute Laune! 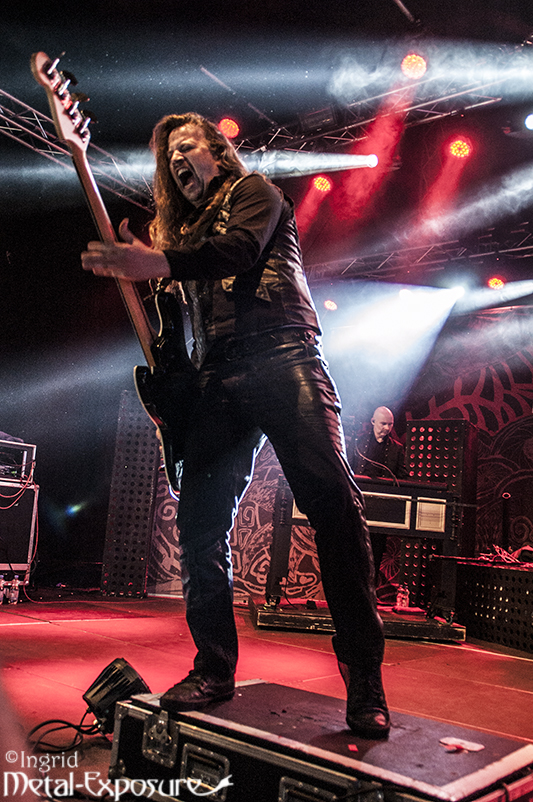 Die Apokalyptischen Reiter is a band well-loved in Germany. No wonder, the lyrics are German and the music is absolutely catchy. Also, a show of the Reiter is guaranteed to be entertaining and satisfying. The gig at Dong was no different. The setlist was a mixture of old hits like Seeman, Es wird Schlimmer and Nach der Ebbe, and songs from their new album, Tief, Tiefer. The audience was loving it, singing along with the lyrics and crowdsurfing like crazy. Awesome show!

BAM. What is that sound? It’s Carcass, blowing the tent away with an hour of in your face death metal. Charismatic front man Jeff Walker whipped the audience into a frenzy, and was distributing alcohol when some technical difficulties occurred. You get extra points for that! Amazing guitar play and percussions, it was hard NOT to bang your head. Going out with a bang indeed!

After three days of head banging, beer drinking, meeting new people and catching up with old friends Sunday arrived. After three days of sun the rain came to mourn the end of the festival, and we all packed our wet tents and went our different ways.

The verdict: There is absolutely no doubt why people call this one of the best festivals of the year. The ambience is great, the people are more than nice and the beer is pretty cheap.
The focus of the festival lies more on the smaller bands than on presenting huge headliners. Even though there were some pretty big names this year!
The new tent was a success. People never really like change, but this one was welcomed warmly! Merchandise had a better location this way, one could actually move a bit during the headliners, and the sound was really good most of the time. Definitely improvement!

Security and staff were superb again – having fun with the visitors whilst maintaining a professional attitude. This is very essential to a festival, and Dong proved again to be the best at this. Kudos to the organisers and crew! 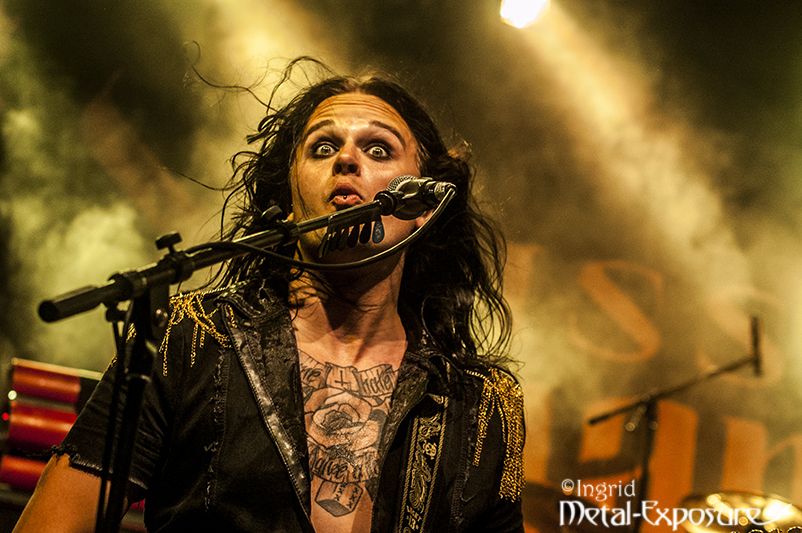 Dong, you were great again, and will see you next year!
[GALLERY=358]