It’s a long trip, all the way from the Netherlands to the Bavarian capital Munich. But we were willing to overcome Easter traffic jams and sore butts to check out the Dark Easter Festival in Backstage in Munich, Germany. The black metal alternative to Easter brunches with the family, you might say. With a promising line up, this festival had to be a success!

The location of the venue Backstage is pretty convenient, easily accessible by public transportation. The venue itself looks higgledy-piggledy and chaotic at first sight, but after you get the hang of it, it’s actually a great location, with three different-sized halls, several places to chill and well located bars and food stands. Also – plenty of toilets, so no waiting in line forever and missing your favourite songs. Just don’t bring your furs to the concert, because they don’t accept them at the cloakroom.. (T)

Upon entering Munich’s Backstage, the Bavarian underground black metal formation Ewigeis already started performing their raw, punishing, yet captivating blend of music. Au contraire to the fate that befalls many opening bands, these black metallers could play their set for an overcrowded room. As eager as I were to get my hands on a cold drink and watch the first performance of the day, there was just no getting into the place. So the only option was to enjoy the icy riffs from Ewigeis from a distance and for a short while. (L)

Set in the second largest room (halle), Belgian Saille (meaning ‘willow’, also 4th letter of the early Irish Ogham alphabet) was the day opener for me. After getting hands on the first beer (which took longer than required before being available), I was allowed to witness some of the finest symphonic technical black metal from the Benelux. Inspired by (amongst others) H.P. Lovecraft, their music is best described as the better parts of Dimmu Borgir (Walpurgis, Blood Libel) and some distant horizon Dissection (Eater of Worlds). Just listening to the drums already made my day! Although the crowd had to warm up somewhat, these guys more than deserve the positive attention they’ve been getting. (W)

Dark Easter Metal Meeting posed its first scheduling challenge in the late afternoon, pitting horror metallers The Vision Bleak against Berlin-based five-piece Aethernaeum. As Metal Exposure’s resident Aethernaeum fangirl, this was not a difficult choice for me – I scurried into Backstage’s smallest venue to watch my fellow Berliners perform their unique brand of “Nature Mystic Black Metal” for the second time in less than two weeks. While their set at Dark Easter Metal Meeting was slightly shorter than the one they’d played in Berlin on their tour with Dornenreich and Velnias nine days prior, the atmosphere was even more intense – the smoke machine was a little too powerful for the tiny room, and we all started the show engulfed in a thick mist that set the perfect mood for the band’s songs about the mystical power of the natural world. They touched on their whole discography, playing tracks like “Die Stimme der Wildnis” and “Die Waldschamanin” from their latest album Naturmystik, as well as “Das Hügelvolk” from Wanderungen durch den Dämmerwald, and even “Waldkathedrale” from mastermind Alexander Paul Blake’s solo debut, Die Rückkehr ins goldene Zeitalter. The perfect blend of clean vocal harmonies and growls, the cello lines that tug at the heartstrings, and the intense beat of the drums make every Aethernaeum show an experience to remember – and Munich was no exception (S). 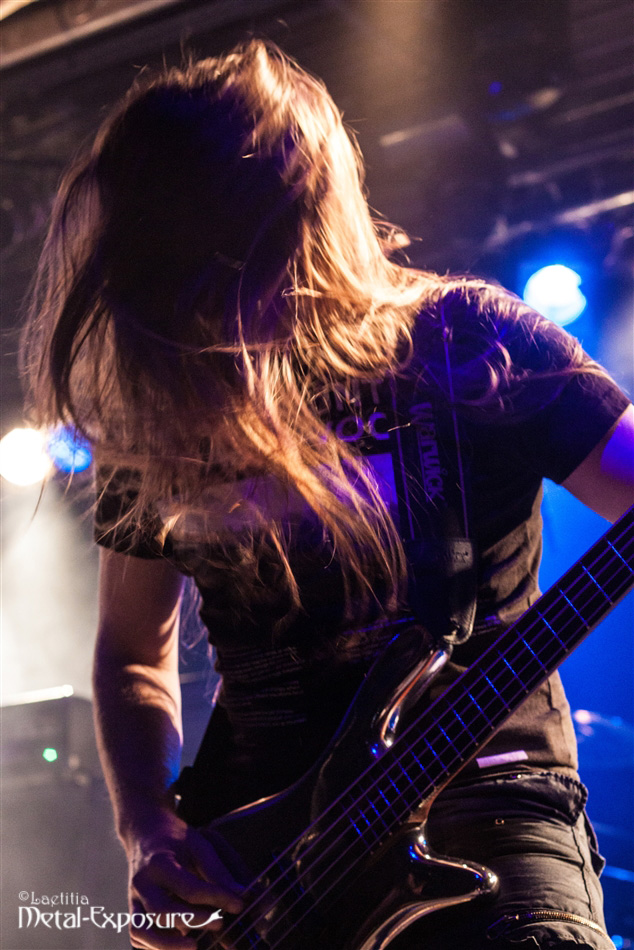 In the main hall it was time for the Hungarian black metal band Sear Bliss. As we were not familiar with their music beforehand, we didn’t quite know what to expect from this band which is known for its usage of Jazz instruments. We were pleasantly surprised. The show could be described as a sort of upbeat doom, which tended to be a bit repetitive, but not in a bad way. Also, the use of the trombone gave it an interesting extra dimension and peaked our interest. Some slightly unexpected guitar solos finished the package. There were a few issues with sound at some point, but they were taken care of and didn’t diminish our listening experience. Definitely a recommendation! (T)

The Swiss phenomenon Bölzer was the band I was looking forward to particularly, not having seen the duo play live yet. The extraordinary sound was to make for an exceptional show, as several of my friends assured me. So expectations were high, which made me forgive the long delay before the show. Front man “KzR” is known to be very particular about his sound check, which you would have to be if you are responsible for all of the melody. The crowd was expectant and plentiful, and we were ready to be dazed.. Which is why it pains me to say, that the show did not meet my expectations. I was ready to be taken on a musical journey, but the sound failed to convince me – it lacked fullness and continuity. There were some moments when I could feel what I was hoping for – for example during “Entranced By The Wolfshook” but these moments where short lived. Seeing the crowd get somewhat thinner, I must assume I wasn’t the only one feeling this way. However – I’m not ready to give up on Bölzer live shows and I am pinning it on them having a bad day or maybe me having too high expectations. But I still want that Bölzer-experience – so, next try! (T) 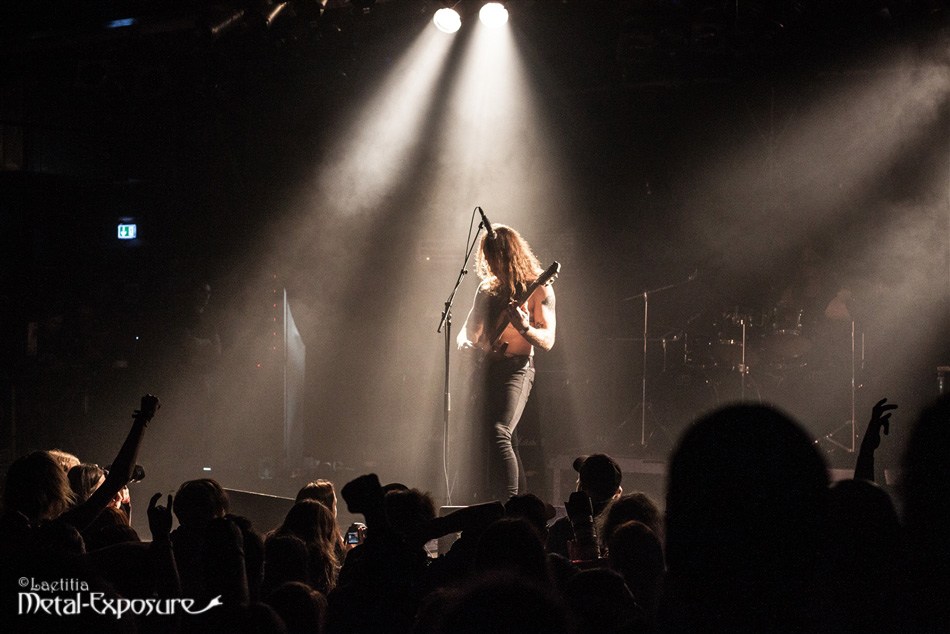 I’m a late convert to the church of Dornenreich, having only fallen in love with the band in early 2013, but like any fervent new follower, I was wildly excited to see the band perform on its 20th anniversary tour – even if the show in Munich was my second one in just over a week. The three-piece fronted by mastermind Jochen “Eviga” Stock played a pared-down version of their anniversary setlist, starting with an acoustic intro (“Drang”) 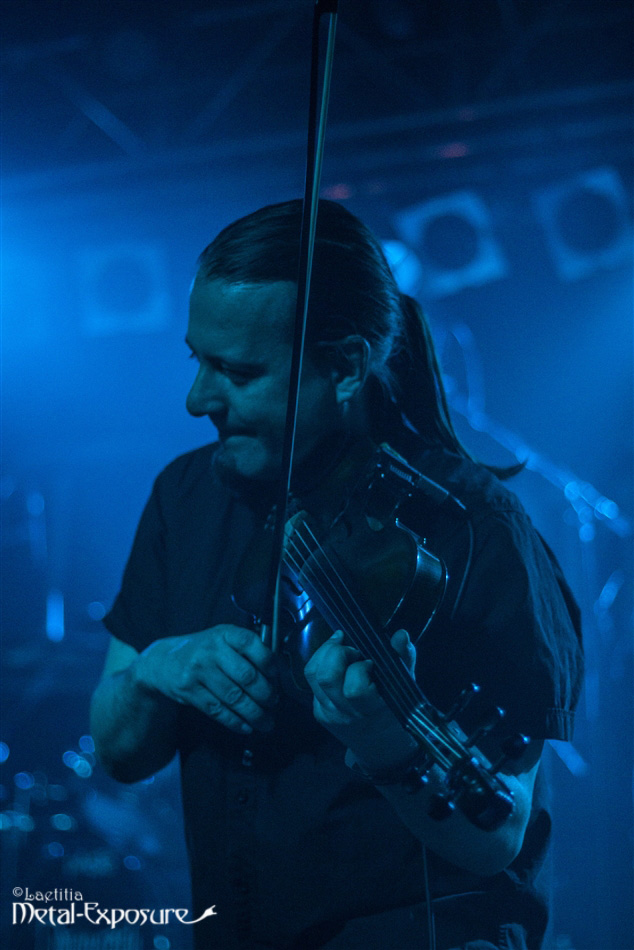 and launching into a pulse-pounding metal set that spanned almost their entire discography, from Bitter ist’s dem Tod zu dienen to Flammentriebe (including my favorite song of theirs, “Flammenmensch”). One of the most beautiful aspects of a Dornenreich live show is the two completely different types of intensity on display: while frontman Eviga is passionate to the point of contortion, sweat pouring down his face, clothing, and guitar as he screams his poems into the microphone, violinist Thomas “Inve” Riesner is like a beacon of tranquil joy; he almost never stops smiling during a performance, and as an audience member, you always feel like he’s smiling directly at you. By the time the last notes of “Erst deine Träne löscht den Brand” sounded, I could feel tears in my eyes; I had to physically wrench myself away to make sure that I could catch up with the rest of the Metal Exposure team in time for Rotting Christ in the main hall. I loved every minute of it. (S)

It is always fun to see one of our own country’s most well known death metal acts play abroad, it evokes some sort of pride. The last time I witnessed a God Dethroned show was in December and even though it was good, it lacked spirit. So, I was curious to see how my fellow countrymen would play this time. One thing you can be certain about with a GD performance, is that the set list always contains a couple of loved classics such as Boiling Blood, Nihilsm, Soul Sweeper and shout-along-song Sigma Enigma. While Henri Sattler & co played flawlessly, we all agreed there was again a certain spark missing. Perhaps it was the atmosphere, perhaps it was us being spoiled rotten with having seen a lot of God Dethroned concerts already, either way, I had hoped for something more (L). 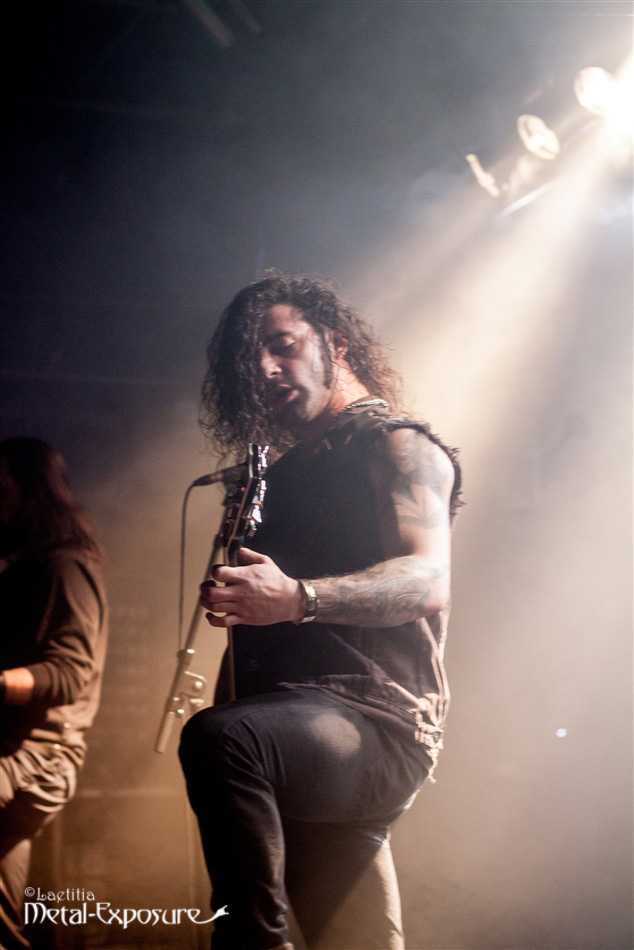 Rotting Christ’s latest effort, Rituals, has been spinning at Metal-Exposure HQ quite a lot and even more in preparation for Dark Easter. Having seen these Greek titans play a few years earlier and with this killing new record of theirs, I knew this was going to be great, if not the best show of the evening. My expectations were met, or actually demolished and afterwards raised to an entirely new level. It was impossible to keep your head from banging to the groove of songs like Ze Nigmar, Elthe Kyrie and Kata Ton Daimona Eaytoy’s opener: In Yumen-Xibalba. It wasn’t surprising that the crowd turned into one big mass of sweaty, head banging people and the first (and only) mosh pits of the day were started. After a (slightly painful) head collision with a fellow metal head, I took some distance from the dampy pit and could better observe how Sakis Tollis and his band mates delivered their tunes with Spartan force and precision. After the show, a fellow Metal-Exposure team member asked me when we could see them and the only thing I could answer was: let’s find out and go! (L)

Another new band for me, even though I probably should’ve encountered the Swedish Viking/Black Metal band Ereb Altor a lot sooner in my music listening career, considering their connection to Bathory. Ereb Altor’s music is strongly related to it, but still has its own personal sound, preventing it from being just a copy/tribute band. Ereb Altor has a good stage presence and the audience obviously enjoyed the show, including me! In honour of legend Quorthon, they played Bathory’s “A Fine day to Die” – which sent shivers down my spine. Frontman Mats really catches Quorthon’s raw vocals well. They did an amazing job with the song and any band that can play Bathory this well is worth checking out! So now I am off to the record store to buy some of their albums! (T) 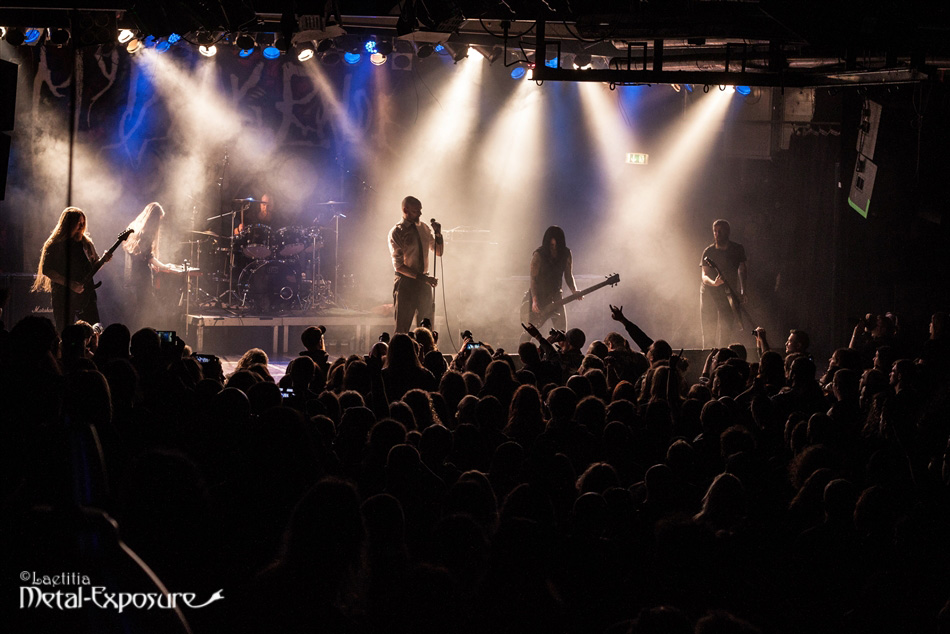 While doom metal is not my preferred genre, I can appreciate My Dying Bride for their talent. The Englishmen and woman are one of a kind in their dramatic performance and with his charismatic expressions and voice, Aaron Stainthorpe knows how to make you feel the misery. Yours truly might not be captivated by MDB, the general opinion of the metal heads at the Dark Easter Metal Meeting was different. It wasn’t as (over)crowded as during Rotting Christ, but there were still a lot of people having the time of their lives. Especially during the older, more death metal driven, songs, necks were moved to the (mid paced) drums. Since all of us wanted to catch a nice spot for Mgła we cut the set a little short, but nevertheless it was a good show. (L)

Yes, they are hyped. Yes, the name is impossible to pronounce (‘Mluaa’?) Yes, they should’ve played in the main hall instead of the smaller one (the word ‘sardines’ comes to mind). The fact remains that MGLA was (IMO) the best performance of the Dark Easter festival and a more than worthy closing band. The illustrious Polish black metal band played an amazing set, which we just did not want to be over. If you have the chance, check out the live video – even on screen it is still able to captivate! The setlist included songs from Exercises in Futility (I, II, VI) and With Hearts Toward None. Had they played for another hour, no one would’ve complained. However, all good things must come to an end..

With MGLA the Dark Easter festival in Munich had come to a close. The after party was fairly enjoyable, though it looked like a lot of people had already left. Time for a recap: Amazing bands, great location, nice people..but horrible, horrible beer! This König Ludwig stuff should not be sold at all! We did find an acceptable alternative though, so it didn’t influence the overall experience. The line up was great and the organisation immaculate. And did we mention the cheeseburgers? Absolutely divine!

We hope to come back to Munich to celebrate Easter in style next year again. And you should too, even if it’s just for the cheeseburgers.. (T)