By Laetitia
The season of Open Air fests has started, time to clean your tent, stock up on beer and ravioli and prepare for mud! Or not? One of Europe’s nicest metal festival, Tuska Open Air, is held in the middle of Helsinki. So you can sleep a little in a bed (there were some afterparties) with warm, dry feet. All comfy, Metal-Exposure geared up to report about bands as Emperor, Satyricon, Children of Bodom and Anthrax on Tuska! 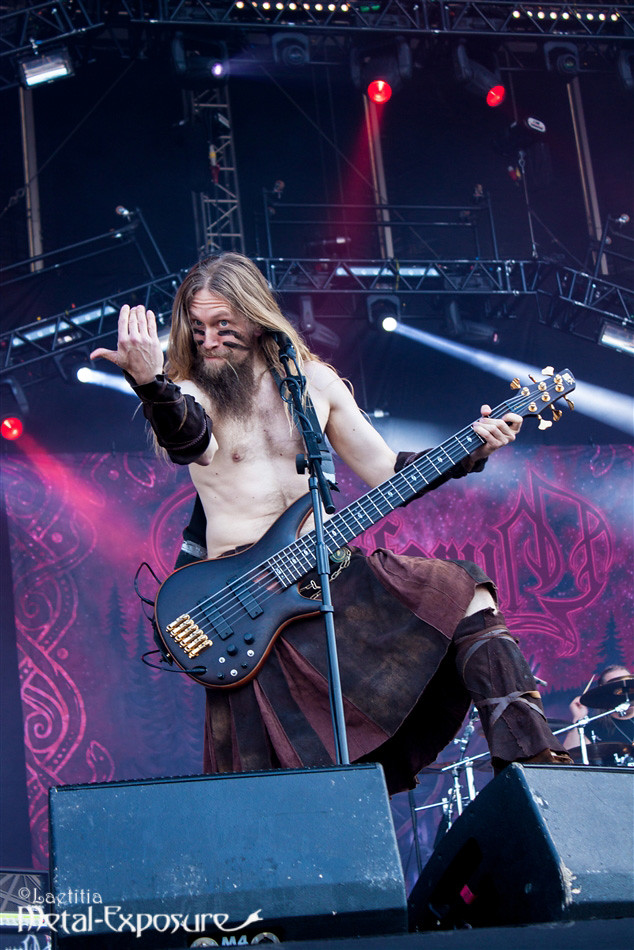 The folk metallers of Ensiferum had an easy task opening the festival. It was sunny and the crowd was eager to get Tuska 2014 started. The guys and girl performed somewhat as if they were in a routine at first and the backing vocals sounded a little off key. Halfway through the set, when Twilight Tavern was announced, the band woke up and started playing more lively. The fans reacted to that by starting circle pits, making the entire show more vivid.

It was exactly this kind of spark that was missing at the show of Poisonblack. Of course, their dark heavy metal does not evoke the same response as folky tunes, but even with the more animated and groovy songs, the crowd stood there, clapped a bit and the band played their part.

The organization of Tuska is never afraid to book bands that challenge the defined borders of metal. Philip H. Anselmo & The Illegals is such a group. Musically speaking, they were the odd one out today. Nevertheless, the groovy/sludge metal of this American formation did attract many fans. That is not surprising, as the music instigated the urge of the fans to start mosh pits and with this characteristic fuck-you-attitude and comments, front man Philip Anselmo is someone to behold in itself. 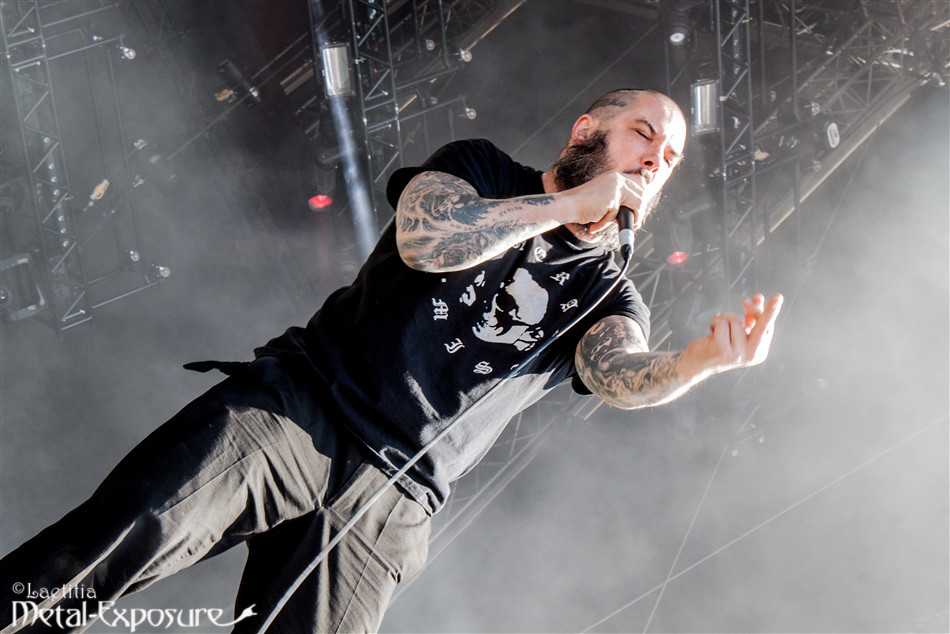 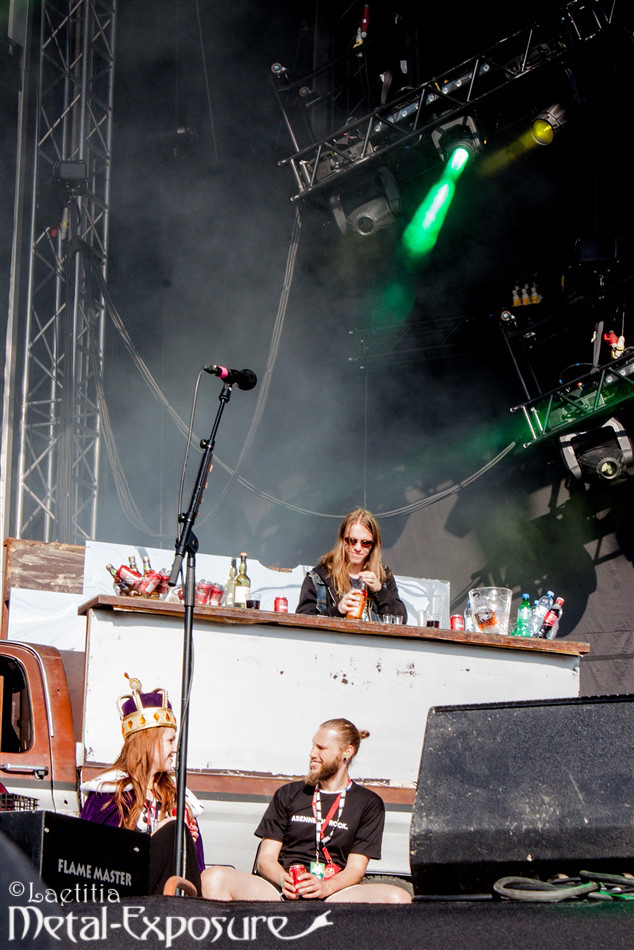 Children of Bodom hosted a barbeque this evening, the Bodom Beach Barbeque. Two of the stage props, the cars, were turned into a bar and a barbeque. The BBQ masters – which were the guys of Lost Society – served the band some meat and threw the sausages into the crowd several times. Amusing as it was, the band did have to deal with some sound issues: the sound of Alexi’s guitar malfunctioned during Hate Crew Deathroll. However, COB dealt with those moments excellently: they would just repeat the chorus for a while. With a mix of classics and new songs, and people crowd surfing on an air matrass and air boat, yours truly would say that Children of Bodom should throw a barbeque more often.

When Carcass vocalist Jeff Walker says: “if you are a poser, clap your hands,” everybody starts clapping their hands. The metal scene really gained something with this band’s reunion back in 2007: a healthy dose of British humor during gigs, a group that already has a bunch of golden oldies and new material that fits well with the old songs. And most importantly for a festival: Carcass is a band that puts on a on a powerful live show each time, just because they simply play well and interact with the crowd. The show on Tuska was no exception.

After two years of silence, Dimmu Borgir is back in town. They are on tour and you can check them out anywhere this summer. But is this Norwegian group still what it used to be? Of course, the stage set-up looks nice, the musicians are overly grimed and dressed up and they know how to play their tunes, like Mourning Palace and The Serpentine Offering. However, the extra choirs, keyboard oeeh’s and aah’s (partially covering ICS Vortex vocals) and the exorbitant decorations have the opposite effect: nobody was really impressed by Dimmu Borgir’s show. 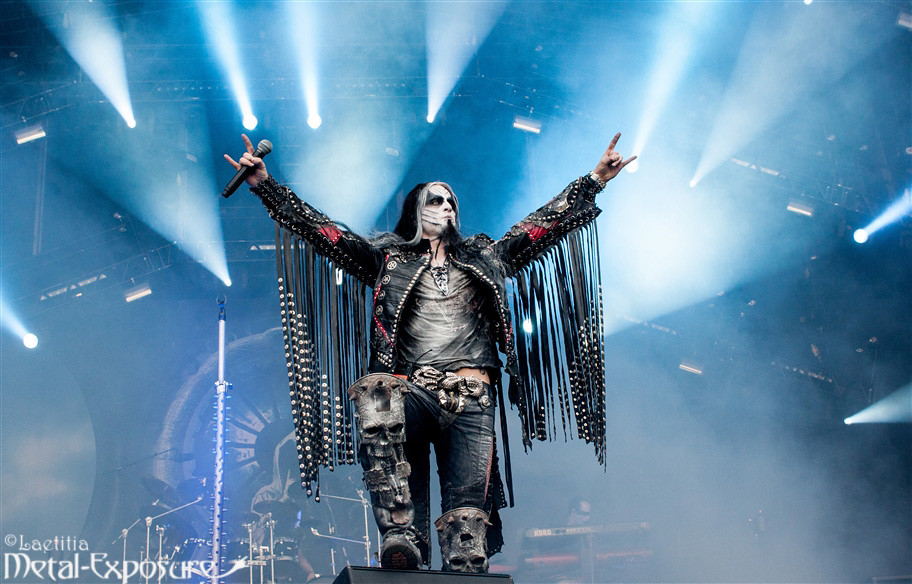 Saturday
What is the metal equivalent of a teen boy band? We Came As Romans possibly. Mainly young fans gathered around this early to watch this American post hardcore group When they entered the stage, the high pitched girly shrieks of the crowd welcomed them. Nonetheless, they started off the second day of Tuska nicely. The groovy vibe of the music already got the crowd jumping around on this early hour of the day.

Lost Society seems to be a part of a thrash revival that has been going on in several countries. Young bands are simply retrieving the classic thrash sound and they become popular while doing that. The Finns of Lost Society are no exception. The musicians run around on the stage like they are participating in a marathon and they try to cool the audience on this sunny afternoon by spitting water and throwing open water bottles into the crowd. This energy is transferred to into the crowd, where a circle pit literally causes a sand storm. 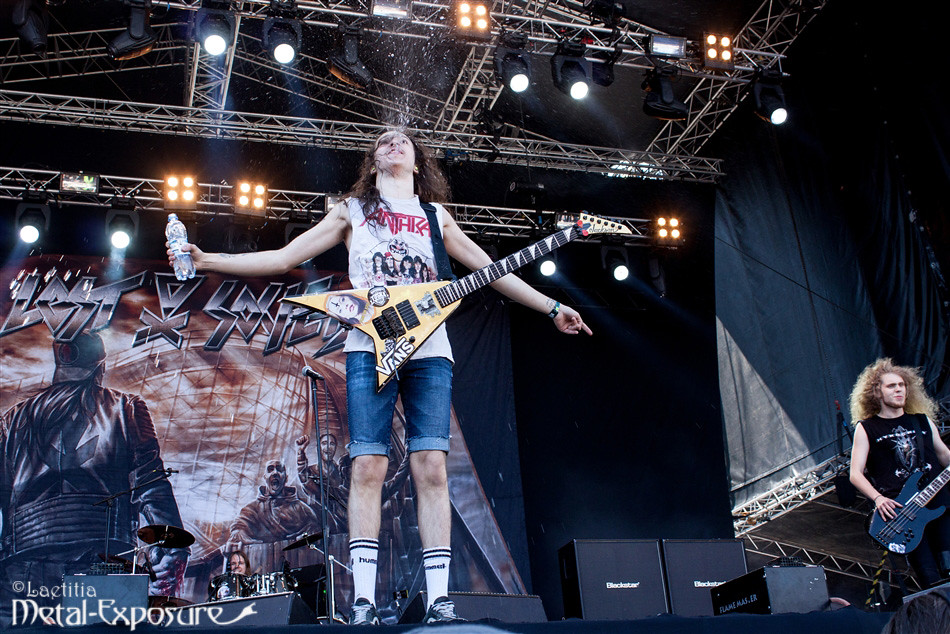 It is possible that you’ve never heard of Turmion Kätilöt before. Apparently they are quite a thing here in Finland. It showed, because probably all of the festival crowd was watching. The main stage would have been a more suitable place for them, instead of the smaller Inferno stage. While a eurodance-ish intro is started, guys with corpse paint took. All in all, The band’s crossover between dance and metal isn’t that new and the show wasn’t surprising either. It was funny, but why they are such a hit, remains to be seen. 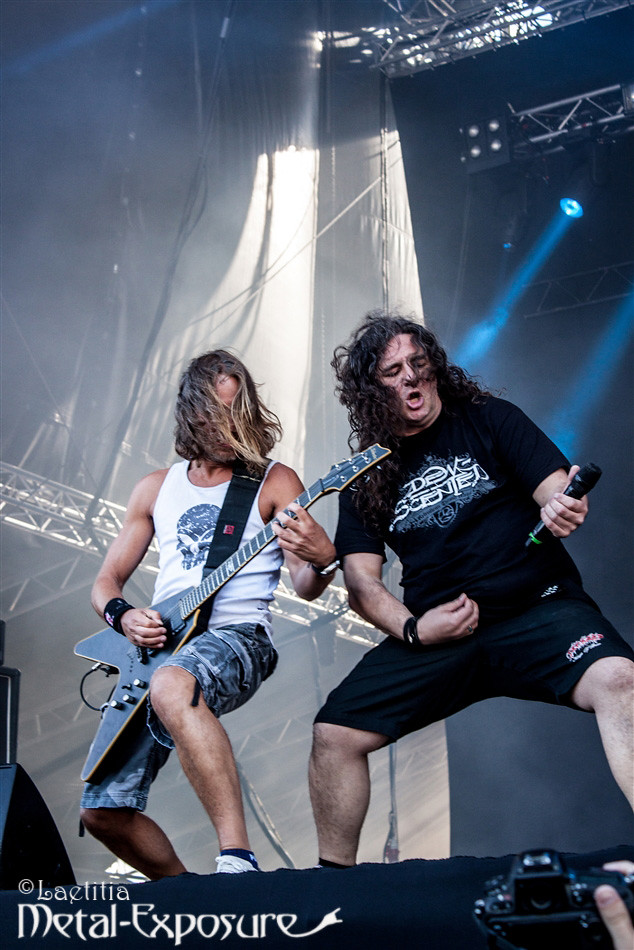 The German band Tankard is well trained in making a party as well. Vocalist Andreas bounces around on stage and his belly flops around on its own. A good thing is that unlike the shows in Germany – where beer is the main theme – is that the band has to rely on its capabilities to engage the crowd here in Finland (because of the strict alcohol regulations)instead of only having to give beer to German drunkards who like anything that contains alcohol.

On the club stage, Amoral – read our interview here – had a little trouble. The stage was way too small. Moving around seemed to be a challenge, as a few of the guys nearly tripped over one another. And if five band members on stage weren’t enough, they called in a sixth, ex-vocalist Niko Kalliojärvi to partake on a medley from the first record Wound Creations. Altogether, the band and fans packed in a little club, combined with the melodic/progressive music of Amoral, created a cosy atmosphere. 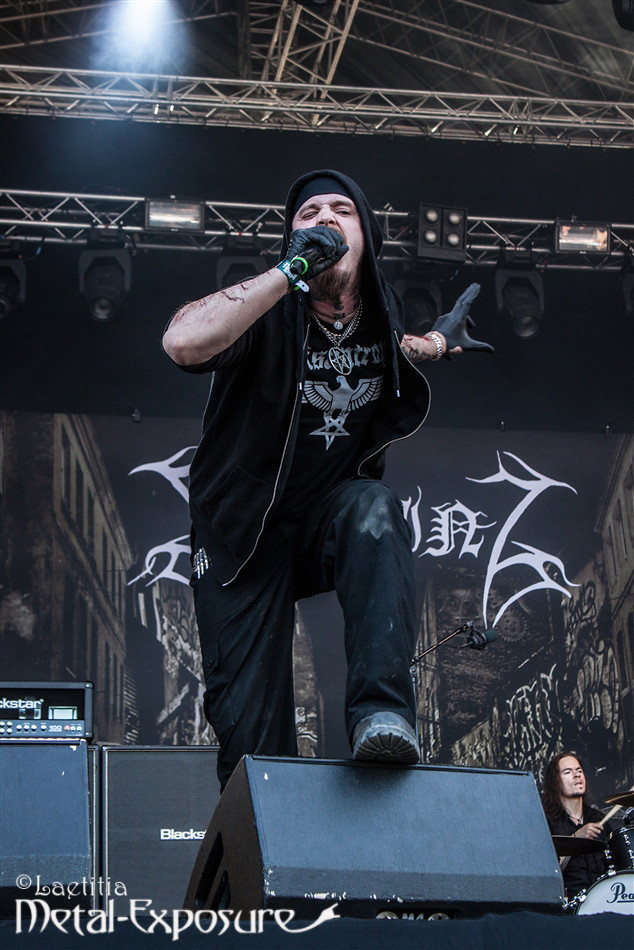 Shining (the Swedish one) replaced Devil You Know, who cancelled last minute. In terms of musical styles, it was not a similar replacement. The metal core of Devil You Know bleaks in comparison to the cold black metal of Shining. The latter attracts a crowd because of vocalist Niklas Kvarforth. He took the easy road today and only cut up his arms instead offering up a mix of vomit, blood, spit and other sorts of human liquids.

Headliner of the day was Anthrax. Singer Joey Belladonna started the show with running laps on stage while he was encouraged by the crowd. This instantly set the mood for the gig. Belladonna engaged with the crowd throughout the gig by inciting them to cheer. The energy of the performance and of the flawlessly played thrash songs spread out over the entire festival area, as everybody was watching and enjoying the last gig of this Saturday. 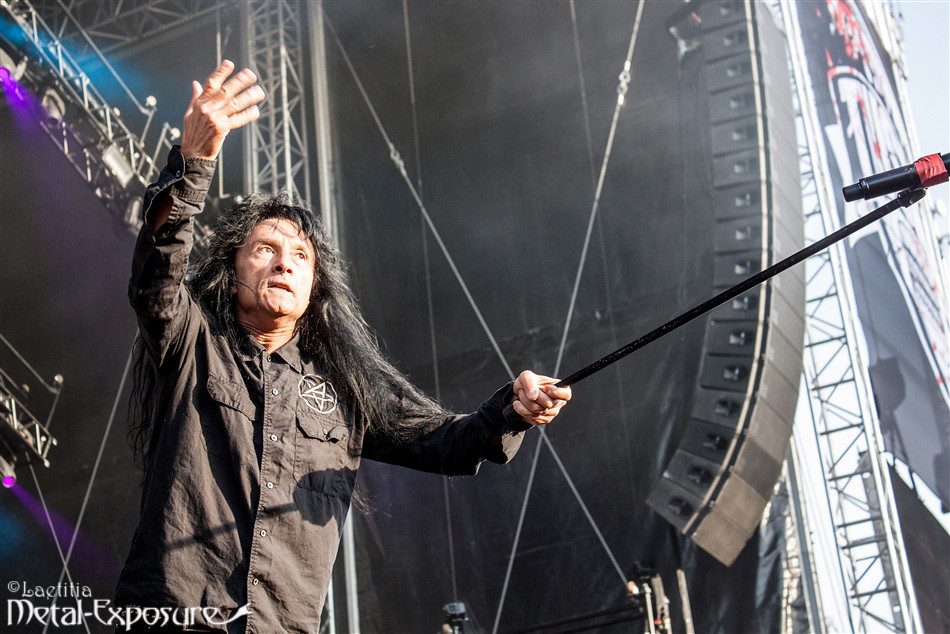 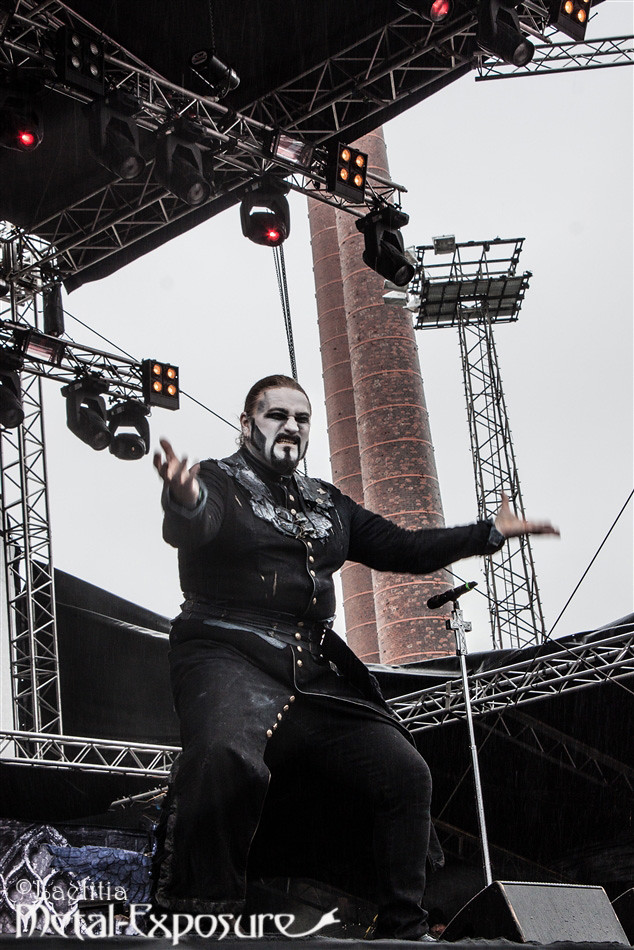 After two days, the gods decided to remind us of the fact that we were in Finland and not in a sunny southern European countries. It rained all day. One of the bands that suffered the most of this weather was the Finnish group Amendfoil. When they started playing, only about fifty people were there to watch them from under their poncho’s. A shame, because their heavy, yet catchy rock is worth checking out.

Powerwolf vocalist Atilla Dorn started the show by making remarks about how he likes wet (weather), followed by a small laugh that revealed what he actually meant. The German power metallers were also playing in the rain, but people seemed to have stop caring about it and decided to watch the rest of the bands anyway. The theatrics made this show amusing to watch and the band got the people to sing along several times.

Normally you’d find the Israeli metal ambassadors Orphaned Land on stage in shirts or even in a sort of long eastern garment. Now, they were clothed against the rain in big vests and long sleeves and despite of the weather, smiling. Half of the set list existed out of songs of the group’s latest effort: All Is One. The other half contained classics like Sapari, Barakah and Norra el Norra. 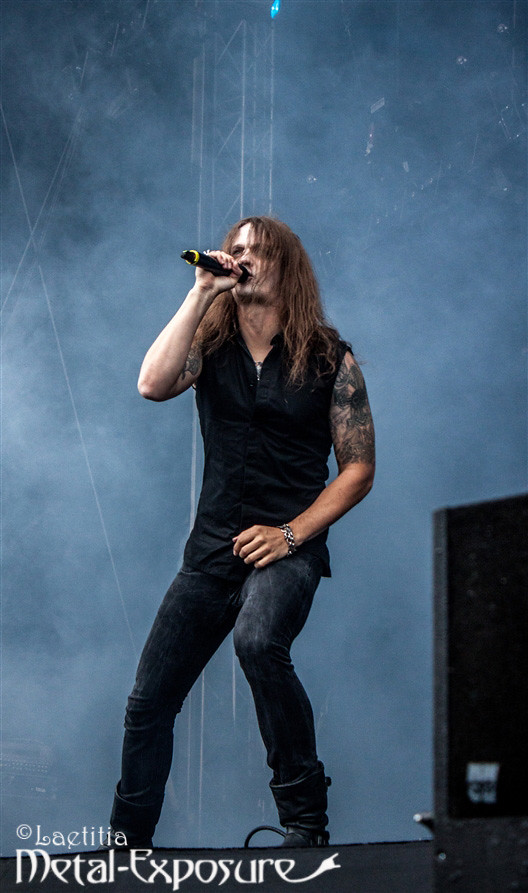 Satyricon seemed to be in an appreciative mood today. It started with comments about how Helsinki is an important place for the band, how the rain didn’t stop people from watching the show and that the longer you do the performing, the more you value it. With or without the sweet words, the set of the Norwegians, existing out of songs of several albums: The Infinity of Time and Space, Our World, It Rumbles Tonight and The Pentagram Burns went down well with the Tuska visitors. Near the end of the show, when the band had not left the stage year, the we-want-more-shouts started loudly. Of course they got it, in the form of K.I.N.G and Mother North.

Alike the show of Emperor in 2007 – when Tuska was still held in the park at Kaisaniemi – people started chanting “em-pe-ror” when it was time for this legendary band to bring 2014 to a worthy end. The entire festival crowd gathered in front of the main stage to celebrate the 20 years of existence of In The Nightside Eclipse. To hear all of these majestic songs was a treat in itself and the show around it was tight. With that, Tuska 2014 came to an end. This festival never disappoints, so be sure to visit it once! 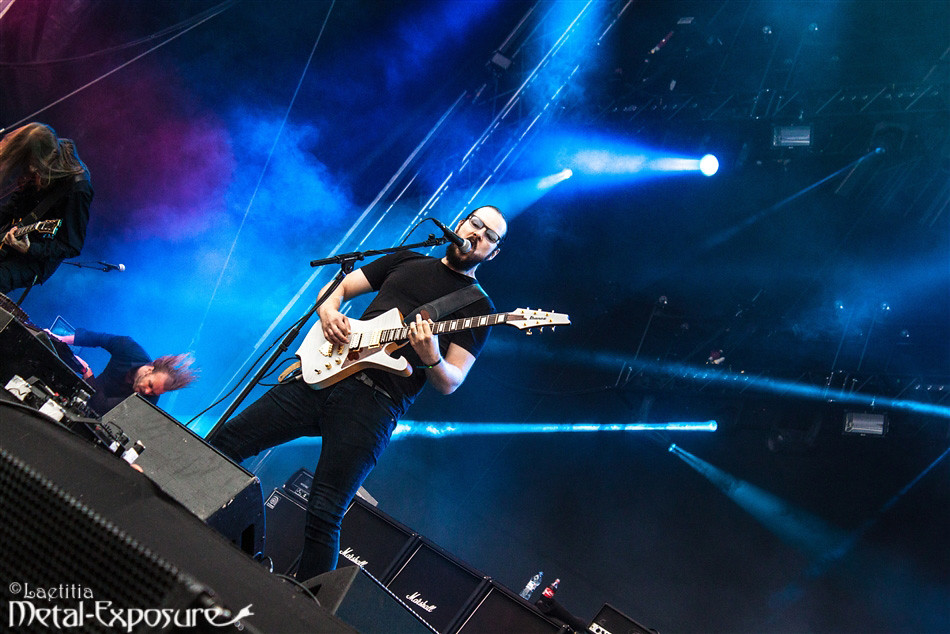