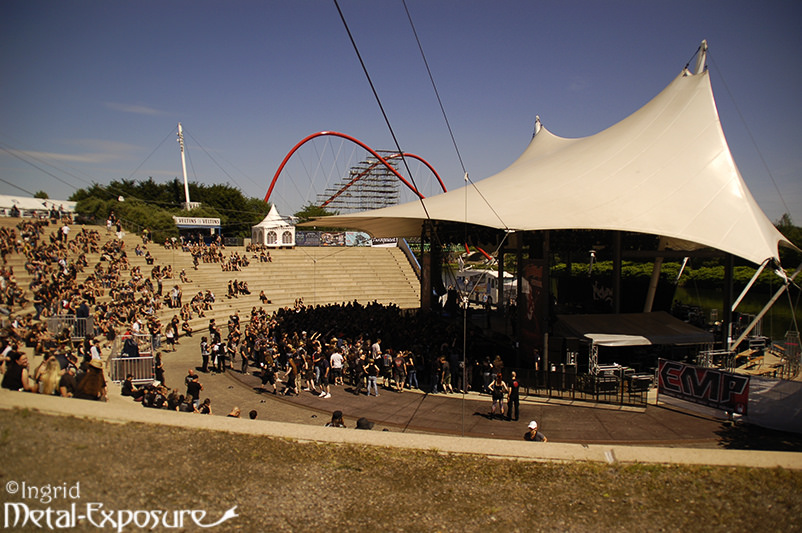 Back at the Amphitheatre at last! It’s been ofcourse just one year since metal-exposure last visited the Rock Hard festival, but it’s been two years since this crew went! But when we arrived, we stepped into that typical Rock Hard atmosphere and it felt like we had never been gone.
After finding a place to put up our tents, the sun was already going down, which meant just one thing:
Time to go to the metal party!! The fans were really into the partying mood, and it was a great party.

First band to watch this day was Nocturnal. Being unfamiliar with this band I was surprised to see that the brutal vocals which I was hearing, were actually done by a woman! Despite a few flaws they did very well. I think I haven’t seen this many people already watching the very first band of the festival before. (I)

Second band I was more familiar with: Zodiac. The guys seemed to be really enjoying themselves on stage, even though the temperature was pretty high! After the intense show of Nocturnal, this blues rock was perfect to relax a bit on the seats of the Amphitheatre with a nice cold beer in your hand! (I) 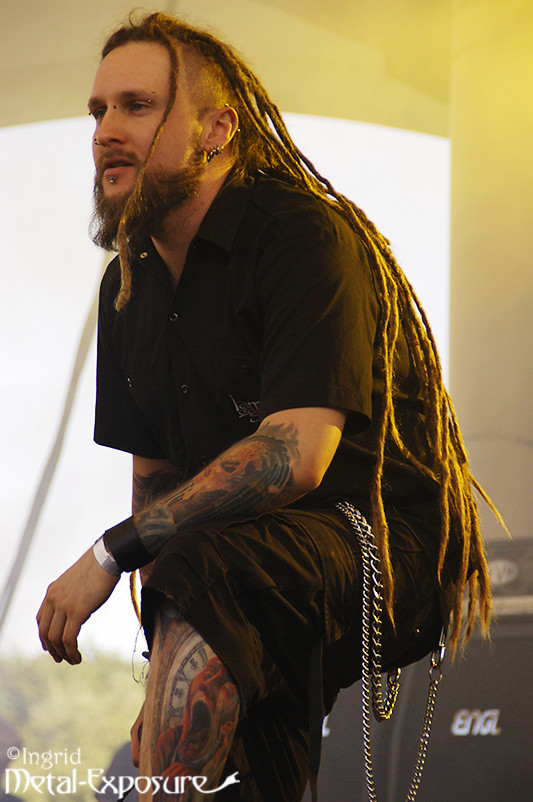 The time for relaxing didn’t last long because next on stage was Decapitated! Being one of the more brutal bands on the festival, they certainly got the crowd moving, mostly inspired by frontman Rafał “Rasta” Piotrowski, who seemed to have a great time here on Rock Hard. They played older songs such as Spheres Of Madness, but also newer songs like Carnival Is Forever and 404 came by. (I)

A very special act on the festival was Midnight, from the US. This was their only German festival appearance this year, and it seemed like this attracted a lot of people since it was pretty crowded when they were playing. The show they played was really good, and full of energy, very nice to watch! (I) 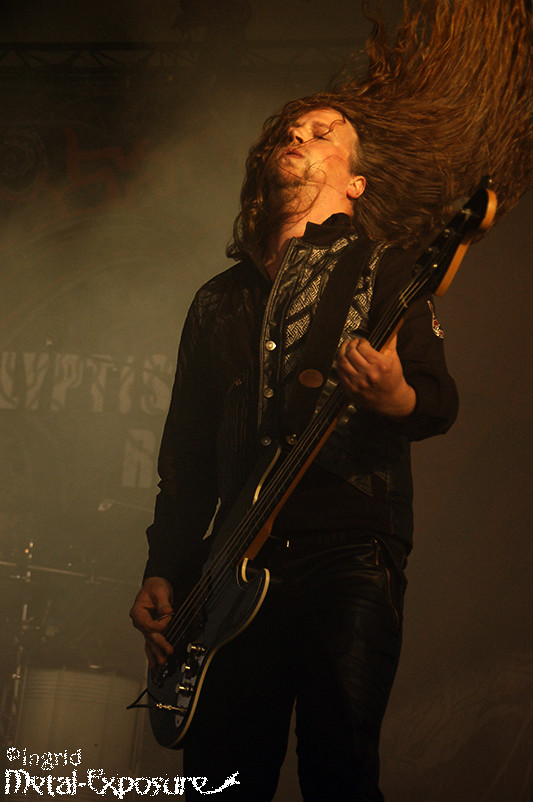 It started to cool down a bit, which was good, because I like these riders of the apocalypse and this gave me the opportunity to actually enjoy the band without dying from the heat.
Just recently (like a week before), they released a new double album, called ´Tief. Tiefer´. To be honest, this album didn´t really tickle my fancy. Therefore, I was expecting that parts of the show would not really be to my liking. Die Apokalyptischen Reiter started with the first track of their latest album ´Freiheit, Gleichheit, Brüderlichkeit, and though the audience was excited, I had to wait for the second song, ´Revolution´ to be able to bang my head appropriately. That´s better! The typical ´Reiter Mania´ feeling had arrived! A mixture of new and old songs followed, the audience reacting better to the old known ´hits´, like ´Es wird Schlimmer´ (that song has so much energy) , ´Friede sei mit dir´, ´Nach der Ebbe´, ´Seemann´, ´Adrenalin´. All in all, it was an enjoyable show and they performed well, but it wasn´t fireworks/explosions/mindblowing. (T) 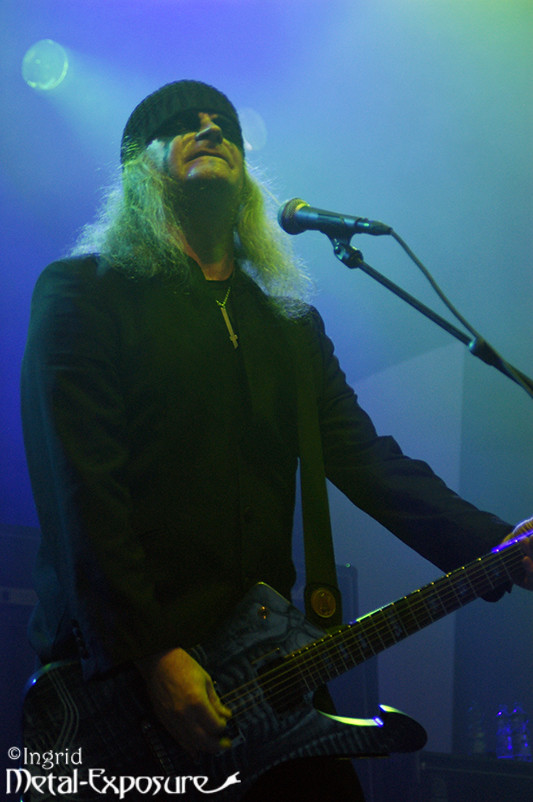 While it was getting dark, the atmosphere was becoming right for the headliner of this day: Triptykon.
This band, formed around Celtic Frost frontman Thomas Gabriel Fischer. The band seemed to have a really good day, since they’re show was pretty good. They played songs from their new album, such as Black Snow and Tree Of Suffocating Souls, some of their older songs as Goetia, as well as Celtic Frost covers, Circle Of The Tyrants and The Usurper. The fans were going wild as well, a good ending of the first day! (I)

Roxxcalibur was the start up for the second day of the Rock Hard festival. This fun NWOBHM tribute band played some nice covers, including my very favourite Grim Reaper song, see you in hell. And they did a good job too! Nice, fun start of the day. (T)

Dead Lord was the second band to play on Saturday. It is not at all farfetched to compare the sound of this young Swedisch band to Thin Lizzy´s. For 35 minutes this band gave all they had for a small, sweaty, but very enthusiastic audience, and there was an abundant amount of hair flying around. I´m sure all the people there had Dead Lords catchy song ´Unkalo´ stuck in their heads for the rest of the day! (T) 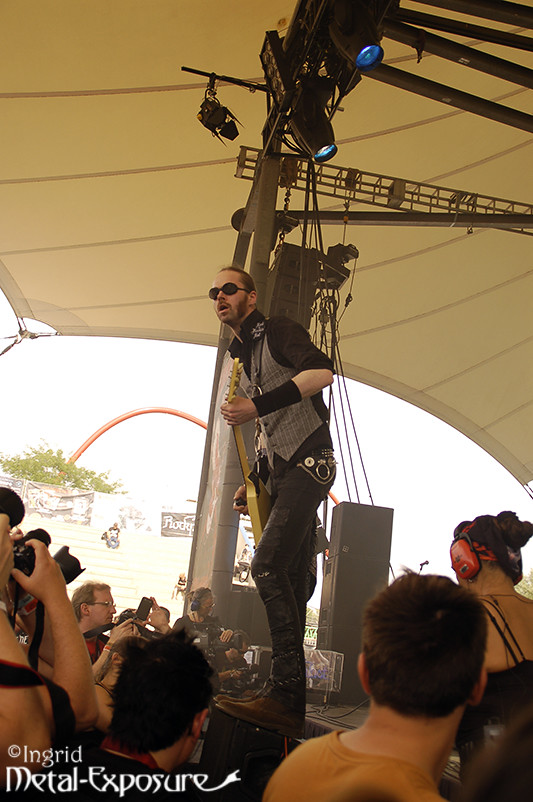 Solstafir during midday, in the full heat of the sun, was still able to invoke so much atmosphere, that one was under the impression to be standing on the black sands of Iceland ´Svarta Sandr´. Despite some unfortunate starting up trouble, the singer´s voice was amazing and even though musically, it may not have been the best fit for the festival, the show was great! And now for something completely different: (T)

Saturday around five ‘o clock it was time for the great rock band Pretty Maids from Denmark! They played a lot of up- tempo songs. And it was obvious that a lot of people came to see this band. Singing and dancing along all the well-known songs. Although they are from the ’80s they still are going strong. Without a doubt PRETTY MAIDS are amongst the most popular heavy/power/melodic metal bands of today. Or to put it this way: These guys are back where they left off in the eighties! (J) 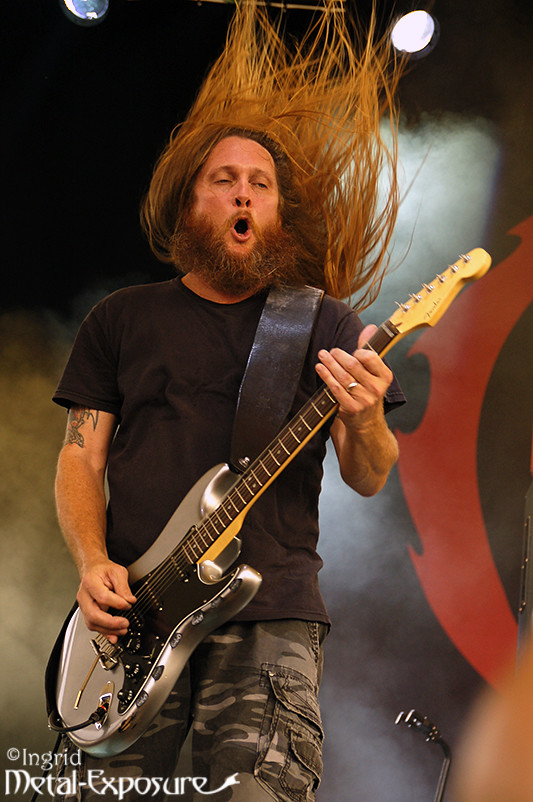 Time for some in-your-face death metal by Obituary – from the beginning until the end they blew the audience away with their straightforward sound. Headbanging and moshing were the law and everyone obeyed. Great show!(T)

It´s a typical Rock Hard band – Sacred Reich. These thrash-metal veterans have played at the Rock Hard Festival before and are welcomed warmly by the fans every time. They proved to be worthy of the audience´s admiration, with frontman Phil Rind making jokes and generally creating a nice atmosphere. The entire band performed with gusto, playing a nice variety of songs to the crowd´s liking. The encore was funny, with two Black Sabbath covers, ending however with their own ´Surf Nicaragua´. (T) 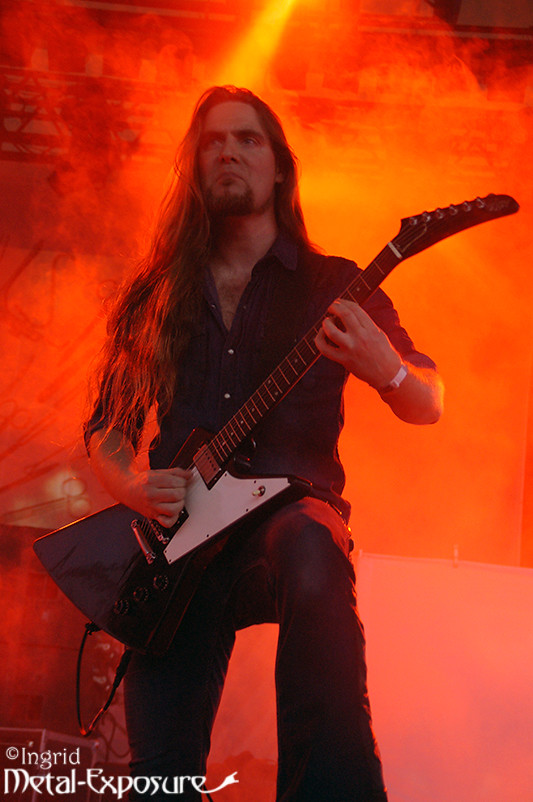 Headliner of this Saturday was Carcass. The arena was fully packed with people who wanted to see them, so many people banging their heads along the songs and creating a big mosh- pit in front of the stage. They played some songs of Heartwork, Swansong, Symphonies of Sickness and ofcourse some songs of their new album Surgical Steel. The singer had great interaction with the crowd, the sound was good and the band played tight! They sure made up for their ‘not so good show’ last week on Fortarock (J) 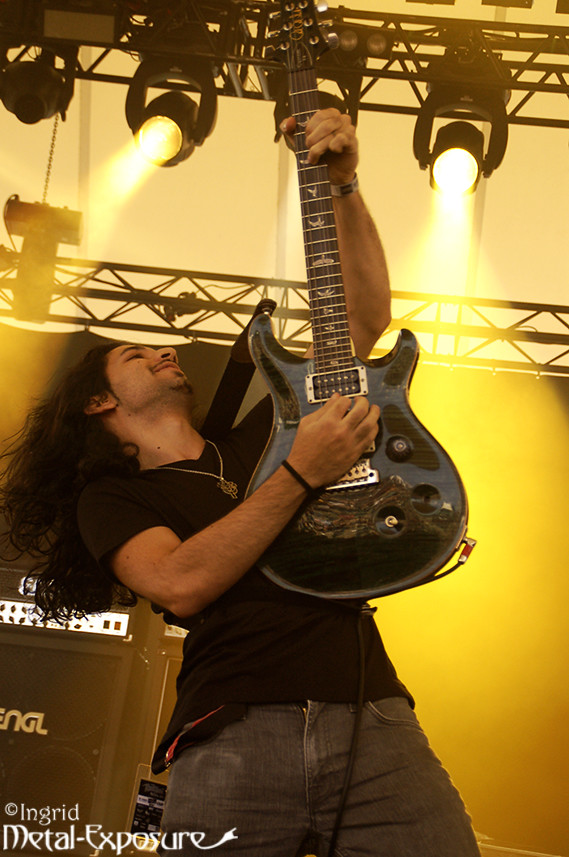 I really like Orphaned Land, and their shows always amuse and impress me – their previous Rock Hard show was amazing! So with this in mind, I went to see them again this year. I realized they would inevitably play some songs from their 2013 album, All is One. I don´t like this album and therefore I was a bit disappointed that they dedicated half their show to it. However, all songs were played in that wonderful Orphaned Land-style, with Frontman Kobi Farhi oozing political and religious tolerance as usual. They had a guest musician, none less than Blind Guardian´s guitarist Marcus Siepen, playing along with´Brother´ from their latest album. They used the opportunity to announce their tour with Blind Guardian next year, which, of course, is happy news!
Sapari was unfortunately missing on the set list, but ending the show with Norra el Norra made me a happy listener nonetheless. Respect for this band, they never disappoint! (T)

After the peaceful sounds of Orphaned Land, it was time for some more brutal time, starting with Insomnium. The band gave a very energetic performance, which was pretty cool, considering the fact that it was bloody hot outside, and these guys are from Finland ;)
They played some older songs, as well as ofcourse some songs from their just released album Shadows Of The Dying Sun, such as The Primeval Dark and While We Sleep. (I) 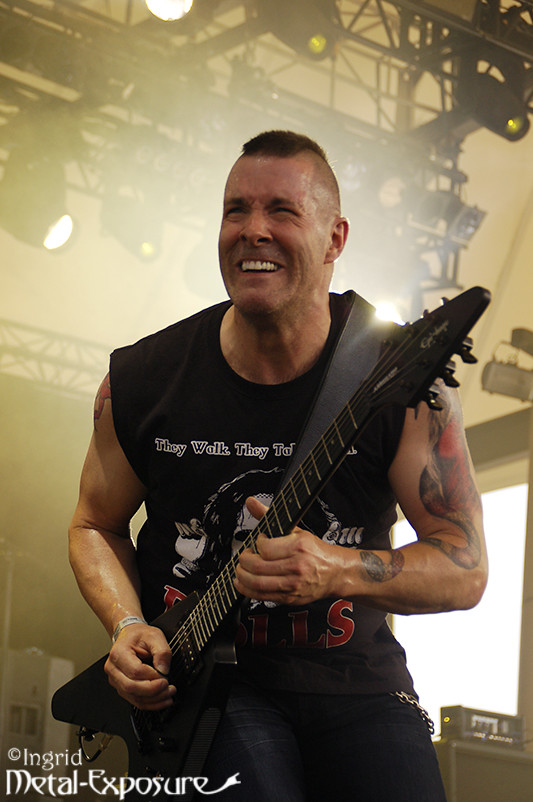 Annihilator was worthy of its name, tearing the whole festival apart with that hammer sound! The crowds were moving in correspondence to the music, moshing and banging their heads. Of course they played ´King of the Kill´, ´Alison Hell´ and ´Set the World on Fire´. Raging energy and energetic rage – that´s Annihilator for you! (T)

Time to calm down, grab a beer and relax, because next up was one of the greatest American rock bands, Tesla. They of course played a lot of classics like ´Love Song´, ´Little Suzi´, ´Modern day Cowboy´, to which a lot of people sang along. Some songs from the new album, Simplicity (out June 10th), were performed as well. After 30 years they still rock hard like in the ’80s and with a new album out they will keep on going strong! Amazing show, perfect for a warm summer evening! (J) 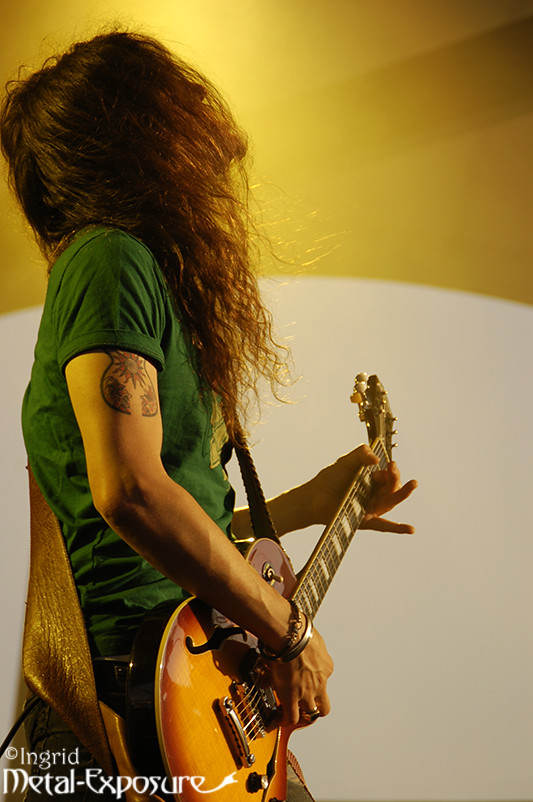 Okay, so Testament was ´just´ a replacement for Megadeth – well, I was really excited about this! It was a good call by the Festival-organizers to book Testament – because you know they will deliver a killer show and the audience will completely forget who was supposed to play in the first place. Testament´s latest album ´Dark Roots of Earth´ is a piece of amazing in-your-face work, and to experience this live was my happy moment of the day. Biggest disappointment – the sound was just awful. Gene Hoglan is a legendary drummer and we love to hear his play, but the drums were way to loud. You could barely make out the first three songs and it was only due to the fact that I listened to this album endlessly the previous weeks, that I knew what was going on at all. Luckily, nobody let this ruin the show and after a while things got better. You just have to love these American thrashers and their relentless energy. I´m pretty sure there were a lot of sore necks the next day, because keeping your head still was just not an option. Awesome end, of an awesome festival! 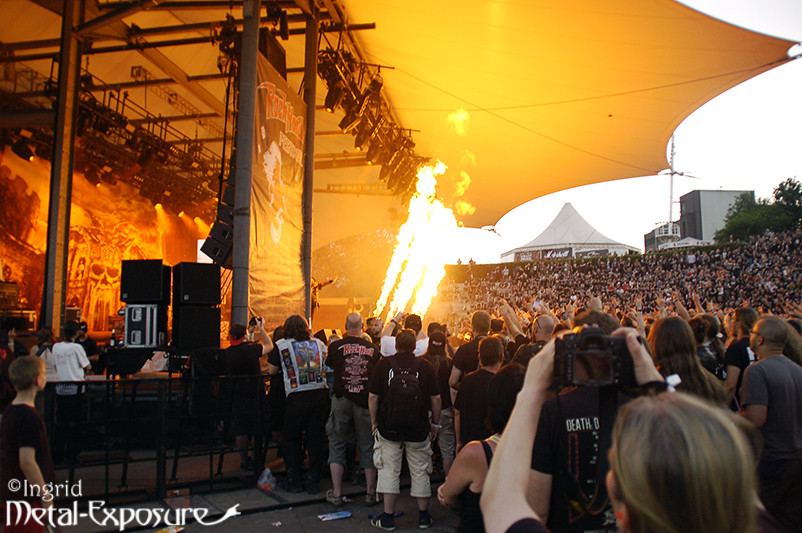