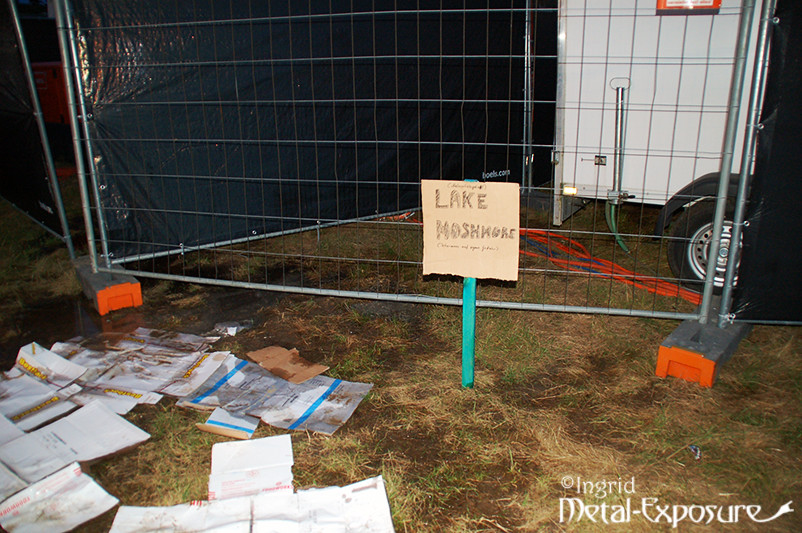 Who remembers Dong 2012? It was the muddiest year the festival has ever known. The rain poured almost non stop and our beloved Dong Mountain turned into one big swamp. This year was quite the opposite and it seemed more alike the very first DOA that Metal-Exposure attented, because it was HOT, very hot!

When we arrived on the mountain, most members of the Dong family were already there. They were hiding from the sun under their party tents or in the sauna which is also known as the festival tent. The first tunes we heard were those of Egyptian Death Metallers from Scarab. Their sound was really impressive, bombastic and they played a tight set. Definitely something to check out if you like melodic death metal! (I) 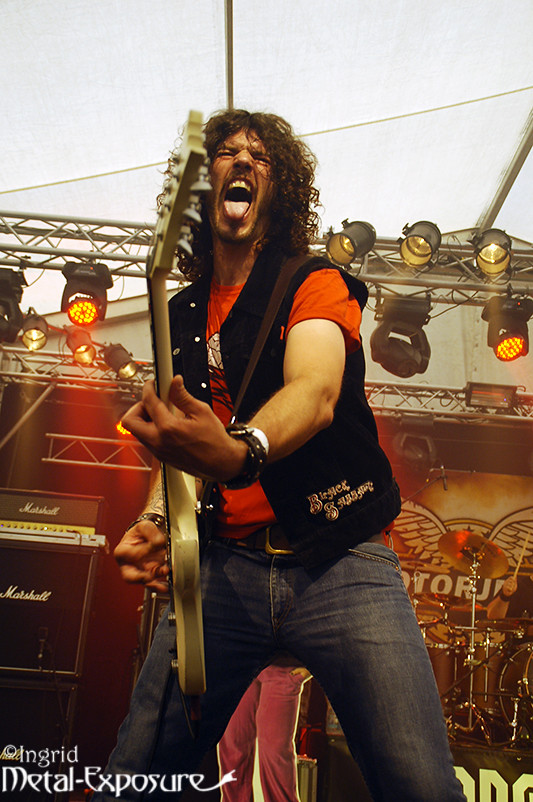 Motorjesus may have been one of the more accessible bands among Dong’s line-up, but they surely weren’t less popular because of it. The band’s slogan: all metal heads (no matter how extreme your taste is) love rock, turned out to be true. Motorjesus’ straightforward and catchy rock got the fans in the tent, which was filled to the rim, singing along loudly and nodding along to the rhythm. (L) Among the bands that played the traditional styles of metal, Iwresteldabearonce, really stood out. The American quintet mixes up metal core with other styles like jazz, progressive metal, electro and so on. On stage, Iwrestledabearonce turned out to be one big chunk of energy. Vocalist Courtney LaPlante jumped around on the groove, marched around and kept on screaming while head banging. The Dong visitors reacted to the show somewhat oddly, they brought leek (the vegetable), threw it on stage and jumped into circle pits with it.(L)

The headliner on the first day were the German metallers from Grave Digger. It’s no secret that this band always attracts a lot of people to their shows in their homeland and Dong is no exception. Despite the heat, the tent was filled to its fullest and people were banging, moshing and going crazy. During their great performance the band played songs from their recently released album ‘Return Of The Reaper’: like Hell Funeral and title song Return Of The Reaper. But also the old classics like Rebellion (The Clans Are Marching) and Heavy Metal Breakdown couldn’t be missed. A good ending of the first day! (I) Friday
The Dutch were represented by the melodic thrash metal group Disquiet. They were the first to play at an early hour, which meant that most people were still hiding in the few centimetres of shade. As the gig progressed and people heard the edgy riffs and melodies that they were missing out on, more metal heads showed up to watch. So, by giving a tight performance, Disquiet proved to be one of those bands that you’ll remember to check out at home. (L)

The celtic metallers from Skiltron came all the way from Argentina to perform at a few festivals, among them Dong Open Air. Normally, they’d have a singer and sometimes a bagpipe player backing up the band, but this time the band was stripped to their guitarist, bass player and drummer. Despite of that, the trio seemed determined to make the best of it. If you weren’t aware of the band members missing, you probably wouldn’t even have noticed it. The stage performance and upbeat music did not lack a thing, although yours truly can imagine that the bagpipes would give the concert a little more extra (musical) energy.(L) Katalepsy from Russia was present to play the really heavy stuff on D:O:A. While beach balls and other inflatable beach attributes were thrown around, the band treated the fans at Dong on some brutal death metal tunes. In an instant, the tent was transformed into a big circle pit and the characteristic grind core hand gesture could be spotted in the air continuously. (L) 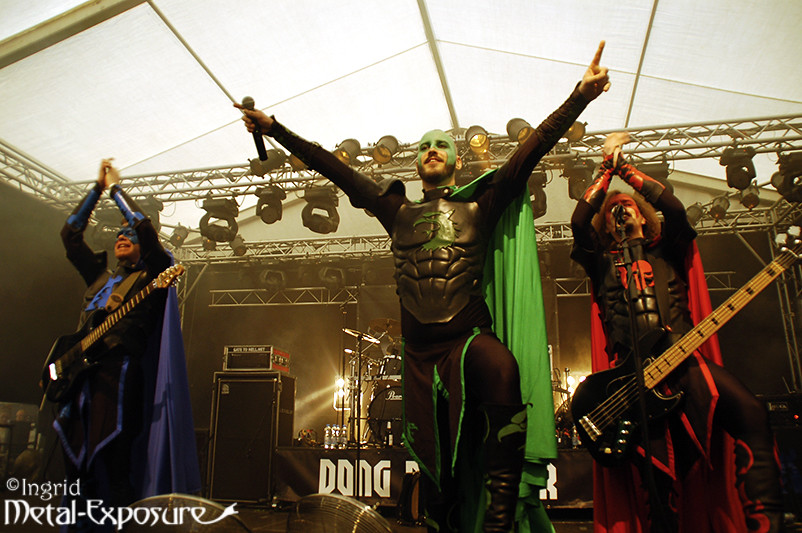 The Grailknights can almost be called the ‘house band of Dong Open Air’ since they play at Dong almost every other year. Their shows are always one big party, as it was today. Even though I felt like I was melting, the battle choir enthusiastically participated during the Grailrobics, sang along very loudly and danced on the music. During songs like Morning Dew, Superhero Medley and Moonlight Masquerade, Dr. Skull stole their Holy Grail, but was once again defeated by Zapf Beauty. The show was very entertaining, just as I had expected.(I)

If you couldn’t get enough of the dress up parties on stage after the Grailknights had played, all you had to do is wait a little because the next band, Milking The Goatmachine, also is kind of ‘an act of its own’. I was surprised how many people left, because the tent was a lot emptier when they started playing. Nevertheless the people who were present seemed to really enjoy themselves and were headbanging and moshpitting during songs like Stallzeit, Surf Goataragua, Here Comes Uncle Wolf and ofcourse Ding Dong. (I) 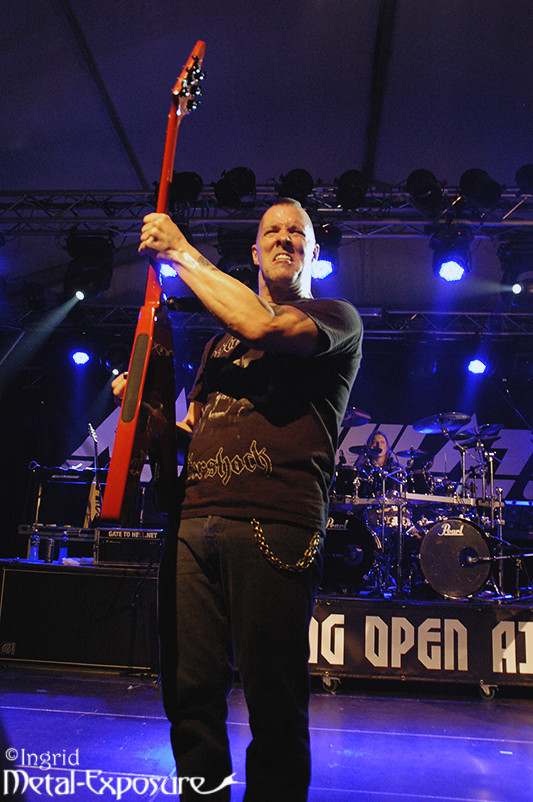 The headliner of this second day was the Canadian band Annihilator. Not long ago I saw them play a great show on the Rock Hard festival, but this was the first time I saw this band play in a smaller setting. As always, Jeff Waters was in a very enthusiastic mood, running around on stage and jumping off stage in and diving into the audience. The rest of the band seemed to enjoy themselves as well, and the tent, which was by now filled to its fullest again went crazy on songs like new songs like Smear Campain, No Way Out and Deadlock as well as old classics like Set The World On Fire and ofcourse Allison Hell.(I)

First band of this very warm saturday was the German band Ashes of a Lifetime. I’m really not into the metal core, but this band was definitely not bad at all! None of those whiney vocals you hear so often in that genre. Partly, it sounded more like decent death metal to me. The singer was energetic, but not bouncing agressively up and down the stage, so that was good too! Furthermore respect for the really cool female bassplayer – happy to see a woman on stage not dressed like a playboy bunny. As is usual at this early hour, the tent was not packed during the show. But a decent amount of people showed up (considering the temperatures in the tent) and there was some moshing going on. The band played well, so overall, very decent show! (T) Next up was the Kölner band The Crimson Ghosts. Now I had already seen some of the members in the audience during the previous band Ashes of a Lifetime, actually doing a decent amount of moshing (for which they get some extra sympathy points). Now these large bastards were on stage themselves, and making a hell of a show of it too! This horror punk band (although there was no fake blood in sight and I wouldn’t limit their style to punk at all) with their not so bad looking frontman (I was disappointed to find out those ice-blue eyes were actually contacts) provided the audience with a great show for the entire 45 minutes. Nice one! (T) Gloryful served the D:O:A visitors metal in its most classic form: heavy metal. Think of powerful mid tempo songs with gallop rhythms and rough, mostly clean vocals. The catchy sound of Gloryful encouraged the fans to move along to the music. The band members contributed to creating a good atmosphere by using the space of the stage, while focusing on their play. (L)

We love occult-themed metal. Nile, Behemoth, Melechesh – you name it, we love it. So, even though not having known Maat before – we were excited to see this band from Germany’s capital. And boy, did they make an effort. Outfits and banners managed to create a really nice atmosphere, even though they were playing at the hottest time of day. Performing solid death metal in the truest occult-death-metal-style, they thoroughly entertained us and they are definitely a band we would like to see more of. Note to the frontman – keep the announcements between songs at a minimum and maybe practise them beforehand. You don’t wanna ruin the vibe! (T)

Vulture Industries could easily be recognized among the metal heads, as they were dressed in white shirts with black overalls. The Norwegian experimental/progressive metal formation has been a guest at Dong before, back in 2011. The carnival-esque elements in the music and the stage performance (somewhat static and the vocalist mainly gazes at the audiences and pulling faces) make this band a little less accessible. However, the crowd present knew how to handle it and calmly enjoyed the music. (L) It’s been a few years since the Thrash veterans of Contradiction last played on Dong Open Air, but it was good to see them back here again. Their show was brilliant and it seemed that as well the band as the audience had a lot of energy! A happy band with a happy audience. (I)

Time for some more Black Metal. Serious faces for serious music soon turned into happy smiling faces once Negator started their show. The band gave a really strong performance and especially their singer ‘Nachtgarm’ really got the crowd going. A good show, and Negator is a band that you should check out if you’re into the old school black metal! (I) Satan Old scool! I was personally really looking forward to this NWOBHM band’s performance – I love their album Court in the Act. Four songs they played from that album, so I was very content (could have been more, though). The rest of the songs were from their recent release ‘Life sentence’ from 2013, with which I was less familiar with. They performed really well, though the singer might not have been at his best. Quite frankly, I didn’t mind it much, because it was sort of fitting for the show. The audience was not quite as packed as I would have imagined it, which was maybe due to the weather. Ending with ‘Alone in the Dock’, Satan ruled supreme once again! (T)

Proudly representing the Dutch this day were Hail Of Bullets. This band always attracts a lot of people in Germany, but today the tent wasn’t as much filled up as I would have expected. Nevertheless there were quite a lot of people watching and banging. Martin van Drunen had his typical show on, and kept talking in German to the audience and even congratulated them with the World Cup they won; a nice show. (I) Arch Enemy is a popular guest at the metal festivals this summer. The main reason is of course the change in singers. On Dong, everybody wanted to see the band in the new line-up and therefore the tent stage was completely packed and sticky. When blue and green haired Alissa White-Gluz entered the stage, the crowd burst out into cheers. The band gave an energetic performance that featured songs from the latest effort, War Eternal, but also the Arch Enemy classics. (L)

So, Dong 2014 came to an end. For the diehard Dong fan, there was still an after party in the tent, where people had the last chance to bang their heads and go crazy. It was once again a great weekend on the Dong Hill. Despite the heat we managed to have a great time, also because the firemen provided us with some refreshing showers and water slides. We can’t wait to see our Dong Family again in 2015!