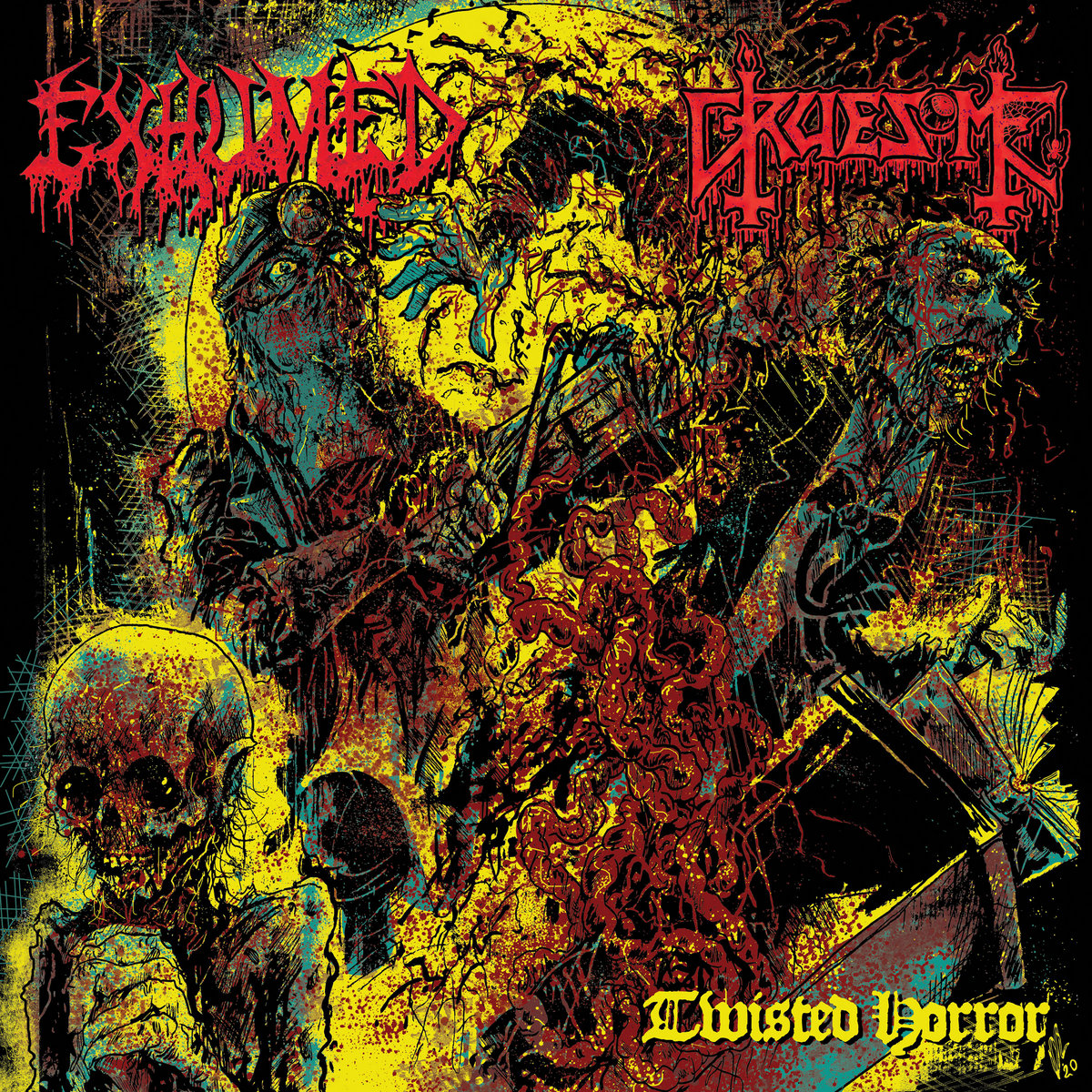 Straight Outta San Jose, California I present EXHUMED! EXHUMED have blazed the way for old school sounding death metal since 1991. The band’s founder and sole remaining member Matt Harvey was a whopping 15 years old when he formed the band. EXHUMED spent much of the ensuing decade hacking their way through numerous line-ups, demos, split CDs, and EPs. In 1998, the band finally released their debut album, Gore Metal. EXHUMED has a long resume of Albums, Eps and Splits. That being said, let’s talk about their newest split.

“Twisted Horror” Released via Relapse Records with Matt’s other band Gruesome.(more on them in a minute). The first 3 songs on the split belong to Exhumed and for this being the first time I’ve actually took my time listening to Exhumed, I’m super impressed by what I’m hearing. The bands overall mix in the rhythm sections captures perfectly the sound of old school death metal. When the leads come it has the nice crisp sound of quality thrash metal. I’ve really enjoyed listening to Exhumed and can without the shadow of doubt, call myself a fan! That being said…. Gruesome is a different story sadly.

GRUESOME was formed when guitarist/vocalist Matt Harvey and drummer Gus Rios’ worked together on the Death to All tours. After discussing and discarding the idea of putting together another incarnation of DTA to focus exclusively on the first two albums, Harvey half-jokingly suggested that the pair write their own songs in intentional homage to Death.

The last 2 songs on “Twisted Horror” belong to Gruesome and I find it hard to get into. They have parts that are super catchy and groovy, just to be followed up by high speed thrashy riffs with drums that sound out of place as if Lars Ulrich was playing them. I don’t like “hating” on bands and I do my best not to. I always try to find the silver lining that makes a band unique or more original than most. Maybe it’s just because there’s only 2 songs by them but I just cannot get into it. Clearly, I know this band has a solid reputation and several talented musicians. The music just seems stale and outdated.