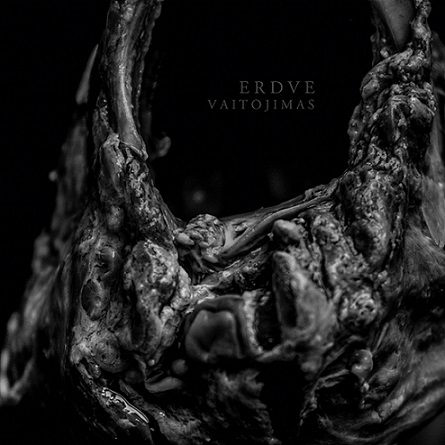 An album named Vaitojimas lands on the digital desk, by a band called Erdve. The first question that comes to mind is, are we dealing with Finnish black metal here? A bit further down the line, Erdve appears to be a Lithuanian hybrid of hardcore, sludge, and black metal. My interested is peaked, partially because to mix of styles presented here, partially because of the label behind it (more than once I’ve found myself positively surprised by the new acts that Season Of Mist brings to the table). The opening track ‘Vaitojimas‘ starts playing. Damn, this is angry, heavy and impressive. Minds are blown and ears are shattered, yours truly is hooked.

Erdve’s band members have been active in local acts over the past years, yet this particular band was only formed in 2016. Lyrical inspirations are domestic violence, utmost disgusting behavior, crimes against humanity and extremism. These themes are brought to life, for example on opening track ‘Vaitojimas‘, with a wall of sound that puts a common death metal band to shame and intense screams that you’d only utter under severe torture.

The band’s black metal influences are mostly noticeable on ‘Išnara‘, and oddly enough, create a bit of a breather after the massive ‘Vaitojimas‘. Don’t think you are off the hook now, since ‘Prievarta‘, pushes you back in the (at some points particularly groovy) maelstrom. It is the embodiment of a destructive force, opening with impenetrable, jigsaw-y, riff assault, basically leaving you with a feeling of flabbergasted-ness (it’s not a word, I know). Album closer ‘Atraja‘ impresses with an ear piercing, atonal intro, before it continues into a bass driven, sludgy groove. This tune, above all, proves that the group’s strength does not rely solely on force, but that there is also good song writing involved.

Erdve’s debut Vaitojimas can by no means be described as ‘easy listening’. In nearly 40 minutes, the listener hardly gets a break. Each riff feels like another punch and each scream and atonal note resonates with your inner emptiness. This whirlwind of violence and emotion will have you on the edge of your seat throughout, creating a challenging experience, perhaps even an uneasy one. My only advice is: let it in.