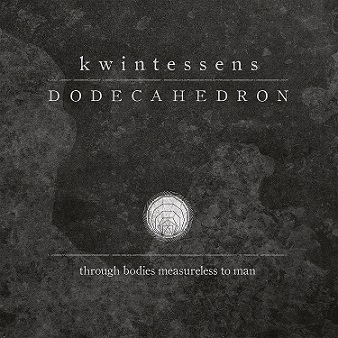 Dutch experimental black metal formation Dodecahedron (inspired by Mayhem’s Ordo Ad Chao and French metallers Deathspell Omega) are about to release their antagonizing sophomore record upon a metal scene that is unaware of Armageddon that is heading their way. Where the self titled debut was a hint of the band’s technical prowess and explorations beyond the genre dimensions, kwintessens is here to disturb the balance of black metal even more thoroughly.

Being unfamiliar with Dodecahedron until recently, kwintessens took me by surprise. The abstract quality of this record, the piece of art that it is, is difficult to interpret or describe. Still yours truly has to make an attempt, because it is simultaneously the most fantastic dissonant piece that has plagued my ears in recent times. Kwintessens provides the soundscape of black metal being mangled and dragged into a black hole towards extinction but not without a fight, which is expressed by tortured screams, noise and utter despair.

The ominous prelude of the album – with a bit of a Blut Aus Nord touch – sets the tone immediately. You won’t get out of this without a scar. The mayhem with which TETRAHEDRON – The Culling of the Unwanted From the Earth starts, removes all safety measures and moves the music into a playing field where most metal bands do not even dare to go. It is a mix of musical chaos of riffs (often atonal) and a bass /drum section that drags you through a pitch black, nightmarish track.

The start of of DODECAHEDRON – An Ill-Defined Air of Otherness gives you a breather for a minute. The tranquil and otherworldy keys would almost sound hopeful, until vocalist M. Eikenaar delivers the best performance up to this point: his tormented, bordering on insane screams make for a deeply unsettling experience against what is musically a calm backdrop, in Dodecahedron’s terms. Halfway through the song the lawlessness breaks free again. If the previous tracks have not given you a knot in the stomach yet, album closer ICOSAHEDRON – The Death of Your Body will do the trick. This monotonous monolith of a song encompasses the oddest soundscapes and drilling vocal lines that all end in a wall of sound and slowly dies into oblivion.

Dodecahedron’s kwintessens is without a doubt the most impressive and ground breaking record I’ve heard so far this year. The abstract vibe will leave the listener flabbergasted and undoubtedly uncomfortable for a while. Kwintessens is bleak, unsettling and disturbing and yet so terribly intriguing that will leave you in pure awe.

Rating: 9.5/10
Tracklist:
1. Prelude
2. TETRAHEDRON – The Culling of the Unwanted from the Earth
3. HEXAHEDRON – Tilling the Human Soil
4. Interlude
5. OCTAHEDRON – Harbinger
6. DODECAHEDRON – An Ill-Defined Air of Otherness
7. Finale
8. ICOSAHEDRON – The Death of Your Body