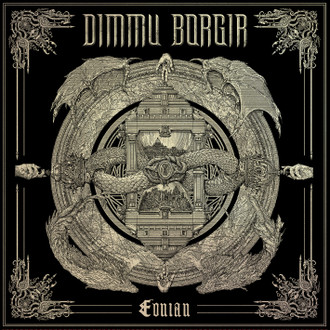 After Dimmu Borgir released their first single, Interdimensional Summit, of their long awaited new album, I wasn’t very hopeful concerning the rest of Eonian. Dimmu Borgir has always been a symphonic and atmospheric band, but where they used to be a symphonic black metal band, I couldn’t find much of the black metal in this music.
Now bands evolve, and there is nothing wrong with that, but I didn’t hear much of the Dimmu Borgir I fell in love with as an 16 year old newly metal head anymore.
Thankfully the album itself has some enough rawness to it every now and then, to stop my black metal heart from bleeding.

The album starts off with The Unveiling. After a short intro we’re immediately overwhelmed by a lot of choir, and that choir barely misses out a song on the album. Combined with the keyboards and the orchestra, the overall sound of this is very epic, but it is a bit too much choir for my liking. It is almost as if I am listening to Nightwish who is making a somewhat rougher song. Now I do like Nightwish as well, but that’s not what I expect to hear when I put on a Dimmu Borgir album.

With Ætheric the sound changes a bit and we hear some very Satyricon-like riffs. The overload on symphonic elements is left out and the balance between the choir, Shagrath’s hellish voice and the keyboard has reached a better balance.

When The Empyrean Phoenix sets in we go back in time and hear that Dimmu Borgir still has what it got in the older days. Together with Lightbringer and the beginning of I Am Sovereign, it represents the rougher and blacker part of the album. I find the choir not as overruling and disturbing at all anymore, as it was during the first songs of the album, but in a good balance with the guitars and keys. There is more space for dark guitar riffs and my black metal heart is pumping a little harder.

After this the album becomes more symphonic and atmospheric again with as special highlight the extremely bombastic song Alpha Aeon Omega, which would perfectly fit on Death Cult Armageddon.
Finisher Rite Of Passage is a beautiful and atmospheric instrumental song, a perfect way to end the album.

The work, effort and detail that has been put into Eonian is very noticeable and it definitely is a much better album than its predecessor Abrahadabra. They have mastered the arts of making bombastic symphonic metal, though have gone a little too far for my liking. If you’re a fan of the older albums such as Stormblåst you might want to prepare yourself a little; if you’re good with the way band has been developing the last two decades you will be happy with what probably is the best they could have done.