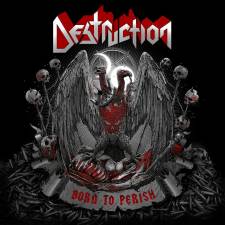 It is good to hear that old school thrash metal is still alive. With releases of Sacred Reich, Anthrax, Kreator and now Destruction we are being overloaded with quality thrash madness. You might have thought that these bands remain in the autumn of their lives…but on contrary these bands are still releasing solid albums and setting the stage in flames!

When listening to the latest spawn of Destruction this is also the case. This band is already active since ’82 and does not show any signs of old age. Their latest “Born to Perish” is just another killer in their vast and admirable career. I am not going to write something about Destruction’s biography. Never heard of it? Please return to the rock you came from and leave it be. Anyhow, let’s focus on the album itself. It definitely deserves a solid review.

“Born to Perish” is an album which is aggressive, powerful and does not take any prisoners. No fillers can be found which I normally expect from Destruction (80% good songs and a few fillers). The metal mayhem immediately starts with the title track. Blazing guitars, the unique throat of Schmier and the pure and sheer energy just oozes out of this song. “Inspired by Death” and “Betrayal”, also accompanied with a video clip, are one of my favourite tracks on this album. Does not mean that the rest of the songs are less. Hell no! All songs are more than worth listening. While “Rotten” reminds me of Overkill and “Filthy Wealth” has some genes of Lemmy in there it still sounds like Destruction. The rather personal “MH17”, yes about the plane crash, can be regarded as an angry protest song. Did I say angry? No? Well it is rather angry and by Satan’s nutsack I like it!

“Born to Perish” is just another killer album from these German thrashers and is a more than welcome edition of my limited thrash collection. Good choice that the line-up has changed somewhat. By hiring drummer Randy Black (ex-Annihilator, ex-Primal Fear) and guitarist Damier Eskic (Gomorra) renewed chemistry and energy has been generated resulting in this superb album. “Born to Perish” is a killer album which will surely get your head banging. Destruction is still high and dry on the European thrash throne and will remain so I reckon. A job well done and I can only recommend buying this filthy piece of work. You will surely like it!