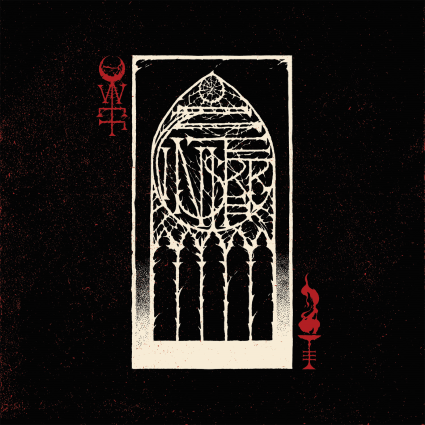 Music, for many, can be both a liberation and a road over which we continuously wander (or prowl?) while observing the many vistas it offers on the way (also while stopping to have one or two beers). An apt name for a band then, Der Wer Einer Freiheit, which translates as ‘the way of a [sic] freedom’ in German. Finisterre once again makes me prefer my personal translation ‘the road to ones’ own freedom’, as the album sets beast and beauty free.

On August 25th, these (atmospheric) black metallers from Würzburg (Bavaria, Germany) have released their fourth full length, Finisterre (Season of Mist). The album opens with spoken words by the aunt of Nikita Kamprad (vocalist/guitarist). The text is taken from the book and movie Die Wand (The Wall) written by Marlen Haushofer. The text speaks about the struggle between being human versus following ones’ more instinctive, animalistic tendencies.

This feeling I felt resonating immensely during my holiday trek through some of the civilized as well as uncivilized parts of Norway. Fitting music, for a country that can be covertly (oil fuelled) decadent, yet also has desolate landscapes of a sublime, at times overwhelming beauty. Pure happenstance, but at that time, reading The Philosopher and the Wolf (Mark Rowland) could not, in researching retrospect, have been timed better.

Finisterre is however, inspired by the existential novel Steppenwolf (Herman Hesse). As the novel deals with (amongst other things) the inability to ‘properly’ face living everyday life as a regular, and more specifically, frivolous human. Indeed, a strong parallel to the roaring 1920s bourgeois and todays’ apathic consumer and hedonistic life style might be drawn. Leading, personally at least, to a distinct societal dissociation or void, to be filled at times with more primal (wolf) expressions of aggression, love and beauty. This is exactly what Finisterre does, albeit musically.

Opener ‘Aufbruch‘, after the spoken intro, is initially a load of aggression riff- and vocal wise. Tobiass Schulers drums are one of the best on-point, diverse and addictive blast-beats I have yet heard; a true pleasure to hear and feel. (This holds true for the rest of the album b.t.w.). ‘Aufbruch‘, takes a melancholic yet defiant turn towards the end, including some clean vocals. These weren’t that good in my opinion on the previous release, Stellar (2015). However, on Finisterre, Nikitas’ vocals are mostly intense screams, and only a well selected amount of cleans section, done better this time.

Stellar yours truly struggled with, as I found it (if only somewhat) less awesome than its predecessors (e.g. Unstille, 2012). Where Stellar felt, on some songs, a bit uncomfortable (maybe too technical and less immersive?), Finisterre is a clear evolution and combination of the best parts of both former albums.

Der Weg Einer Freiheit – Finisterre has it all: the atmosphere and the desperate aggression (‘desperession’) I love so much, but also change and growth to more musical variety and a less sterile but more organic (in-your-face) sound. Hell, it may sound almost easy-listening, if you happen not to pay enough attention. The low tempos, open ended pieces on the instrumental ‘Skepsis 1‘ betray a lot more (classical music?) inspired layers however. Together with ‘Skepsis 2‘, they are musically the most interesting and gripping pieces.

The album is self-produced, but still like the other albums, commendable for its’ good sound quality, dynamics and generally non-low-fi-ness. The album is gripping, has a floating quality to it that will lead you on a musically ferociously technical trek, away from every day human life. This abandonment of the mundane and decadent is traded for a place of wondrous soundscapes intertwined with remorseless and overwhelming drums and riffing. Maybe escaping from all the people around is also escaping from the limits we impose on ourselves, so indeed Finisterre is true to the band’s name: the road to one’s own freedom. A sublime album!