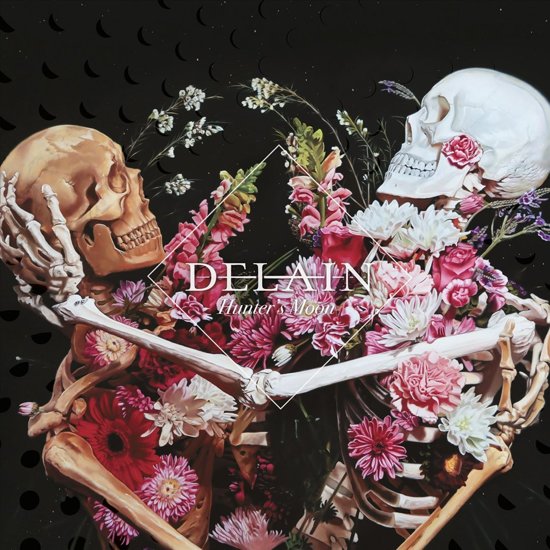 Where the full length Delain records have always impressed me, the EPs were of a different caliber. Does Hunter’s Moon break this cycle?

We were introduced to two of the new Delain songs during their performance in Zwolle (report  here ). Not only that, the first track of the album “Masters of Destiny” has gotten an official video.

Masters of Destiny is an impressive track. There is a softness in it, but also some powerful singing which gives the song an extra dimension. The song feels complex and bombastic. Next up we have the title track “Hunter’s Moon”. This song contains some screams from guitarist Timo Somers which gives the track a fresh feeling. The song needs this, since the chorus repeats itself a little bit too much.

Hunter’s Moon can be seen as an experiment as well. Both guitarists of the band, Timo Somers and Merel Bechtold have written a song for Delain and those can be found on the EP. In Timo’s “The Silence is Mine” we are treated to what he is best at and feels familiar with, catchy and cool guitar riffs. The song stands out as it’s not something you would normally find in a Delain record. Sadly, it’s short, being under three minutes long.

Merel’s song, “Art Kills” brings flashes of the style of Amaranthe to light. The electric tunes feel a bit out of place in a song which normally would be a great fit for Delain. For me, these electronic upbeat parts pull me out of the song and out of the good vibe which Hunter’s Moon brings.

Sadly, the rest of the record is filled with ten songs which were recorded at their show in Utrecht. Since we already had “A decade of Delain – Live at Paradiso about a year and a half ago, this feels like a bit of an overkill. I’d rather see a few more new songs instead of another repeated live set.

Once again, another Delain EP has left me a bit disappointed. The new songs rock and especially Masters of Destiny makes me hunger for more. Thats why the EP feels a bit underwhelming, giving us only four new songs