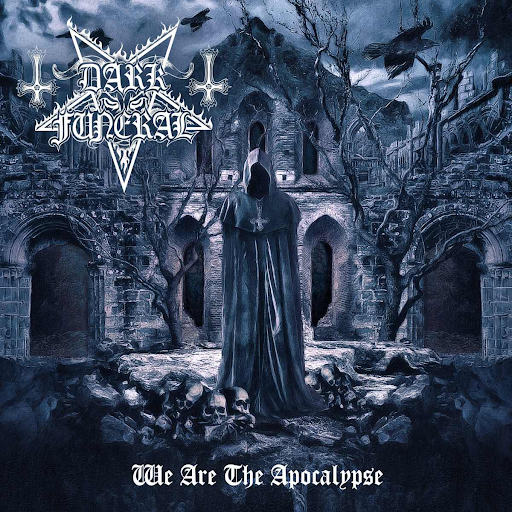 Together with Marduk, Dissection and a few other genre-breaking bands, Dark Funeral put Sweden on the black metal map in the beginning of the nineties. Their debut EP “Dark Funeral” and first full length “Secret of the Black Arts” made sure that this act became a force to be reckoned with.  And frankly, it seemed they have dropped off my radar since then. Until six years ago when I got re-acquainted with these Swedish blacksters again due to them releasing  their superb “Where Shadows Forever Reign” album. Now after a long hiatus of six years Dark Funeral is back with their newest album “We Are The Apocalypse.”

And although the beast has been lying dormant for six years, it is now awake with flaming horns and fueled by hatred. Lord Ahriman and his comrades, including newcomer Jalomaah who does an exceptionally good job on drums, manage to spawn nine quality tracks.

With the opener “Nightfall” Dark Funeral opens the gates of hell and lets the evil hordes come through. And wide open, I must add, since this album is a ferocious and aggressive, which brings me back to the good old days when “Secrets of the Black Arts” reigned. Follow up “Let the Devil in” starts with a really cool drum pattern and guitars before the main riff shreds your eardrums to pieces. The melody and atmosphere is dark, brooding and haunting. It causes the more aggressive and straight forward tracks “When Our Vengeance is Done” and “Nosferatu” to be even more ferocious. With “When I Am Gone” I linger back towards the supreme “Where Shadows Forever Reign” album – specifically the song “As I Ascend.” “Beyond the Grave“ and “A Beast To Praise” on the other hand show that Dark Funeral is back and full of hell and still aggressive without forgetting to put diversity in their songs.  As said, the music is dark and aggressive but the band can also create some really compelling melodies. Just listen to “Leviathan” with its masterful solo and you will concur. The finishing and title track “We Are The Apocalypse” can be seen as a signature song where great craftsmanship and good song-writing go hand in hand. It seems like a fitting end for this majestic album.

The Horned One really should be pleased with this newest spawn of Dark Funeral. Is there anything to complain about? Yes, a little. Although the vocals of Heljarmadr are good it sometimes lacks some variety. On the other hand I don’t think a lot of people will be bothered with this remark because his throat is powerful and suits the music rather well (in a  live setting as well, I must add).

The production of this album is crystal clear and really powerful. And together with the fitting artwork it sees to it that your ears and soul are filled with pitch black darkness when delving into this album. I can only conclude that the masters of the black arts are back in excellent form. “We Are The Apocalypse” is a great album which will please the old and even will make some new fans.  If you are a fan of Scandinavian (black) metal this album is a must have. Good to hear Dark Funeral is back! And let’s hope they will roam the stages this year, they certainly deserve it. Hail Dark Funeral!