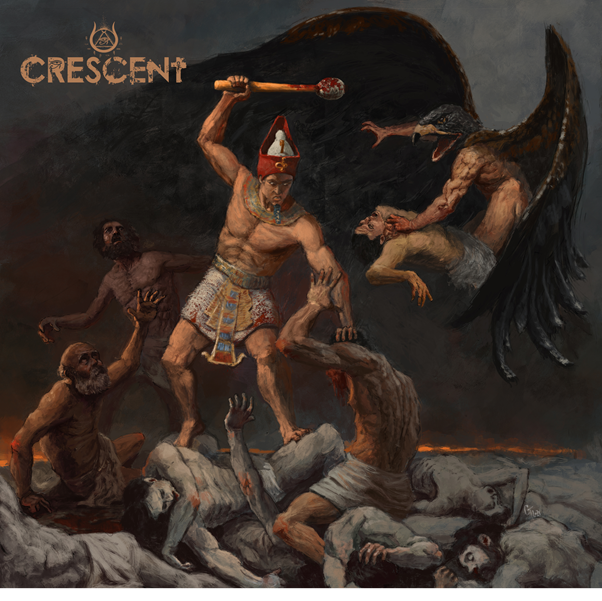 The mysticism of Egyptian mythology is brought to life in a furious modern way through Crescent, a blackened death metal band from Egypt that has been formed as far back as 1999, but is only starting to break through recently and with that impress many in the scene. The band returns after three years since the release of The Order of Amenti with their new full-length album, ‘Carving the Fires of Akhet.’

The album starts with the titular track, which is nothing short of brutal from the first second. The drums and guitar conjure up a really heavy sound that has this classic Crescent feel to it that you won’t get from any other band. The vocals join in with an odd, somewhat muffled growl that aids in the ritualistic feeling as the drums switch from the blast beats and death metal to an enchanting rhythm. As the song goes back to more traditional blackened death waters the vocals are quite prominent and varied in their growls, switching from deep false chord growls to a more higher pitched black metal style.

From the first minute the band absolutely attacks with their sound, and leaves no room for intros or interludes. The unwavering ferociousness continues throughout the album, although with occasional softer passages that really demonstrate the band’s origins. Much like with most bands from the Arabic world this really elevates the music and gives it character, as well as making sure it’s not just boring death metal. With that they often manage to make the album sound even more evil – and in a way religious – such as with the short spoken part in “Serpent of Avaris.”

Despite falling quite heavily into a broad spectrum of extreme metal, Crescent make sure to add enough melodic passages to their songs to make them rather catchy. “Neb-Pehti-Ra” is driven forward really well by guitars from the band’s main vocalist and guitarist, Ismaeel Attallah, and the song is actually quite progressive with its transitions and modulations. The same can be said about “As Nu Enshrines Death,” which is probably the best song on the album and also the only single that came out pre-release. The track shows the band’s maturity and a desire to do more than just be as heavy and brutal as possible.

Finishing off the album are a few gems – covers of songs that influenced Crescent a lot – Dissection’s “Xeper-I-Set” and Bolt Thrower’s “…For Victory.” The band used to play almost solely Dissection covers in their early days and it’s great to be able to hear their take on a classic, which they somehow made sound larger than the original is while keeping its charm as well.

I’m slightly torn on this album. There are clear signs of the band moving forward with their sound and evolving well as well as adding more complex elements into their music and taking inspirations from various subgenres. However, the record does lack a bit of diversity and until you hear it a few times the tracks can be difficult to distinguish from one another, especially if you’re not entirely focused on the music. Saying that though, it’s hard to find any fault with the quality of the riffs, vocals, drums or overall construction of the songs, and I can definitely say it’s a really solid extreme metal release, which will hopefully pave the way for Crescent to do well in the future.