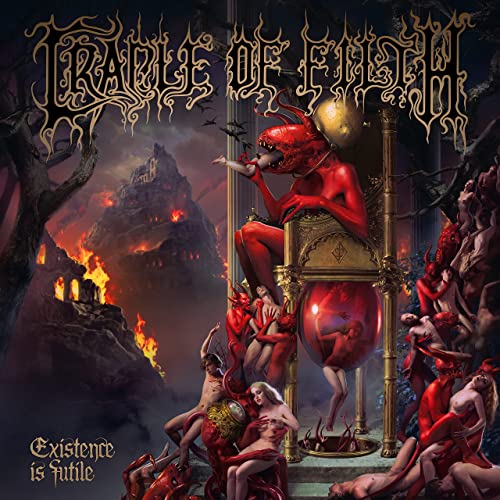 Cradle of Filth.. what to say about this ground breaking act? The fact that they have released their 13th full length spawn? The fact that they managed to reclaim the extreme metal throne since “Hammer of the Witches (2015)” and also managed to surprise friend and foe with their first and now latest album(s)?

Fact is simple. “Existence is Futile” is a really good album. You might not agree but it seems Cradle of Filth is back in excellent form operating like the heydays of this band (90-ies and beginning of zeros).
I must admit, their musical formula hasn’t changed that much after all these years except from the fact that the Black Metal elements are stripped from their music. But frankly, this doesn’t matter since their songs are crafted in such excellent and highly recognizable manner that it is and stays undeniably CoF. Cradle of Filth operates in its own niche and manages to keep doing so. It is good to see that the fire is burning fiercely on their latest record. The dark (neo)romantic, goth/horror grandeur and occult themes are still present after all this years. With “Existence” they make no exception and it frequently results in a trip back to memory lane yet manages to keep fresh and exhilarating.

After the intro “The Fate of the World on our Shoulders”, “Existential Terror” bursts of on all hooves and manages to keep you on the tip of your toes with lustrous riffs, interesting choirs, pace changes…the works. “Necromantic Fantasies” shows the diversity of this band and definitely shows the qualities of newest member Lady Iratni (vocals, compositions and keyboards) while the more complex “Crawling King Chaos” is an up-tempo track loaded with adventurous choirs and “Black Smoke curling” remind you of the glorious “Cruelty and the Beast” era. With “Discourse between a Man and his soul” they manage to display a haunting doomish ballad only CoF can and “The Dying of the Embers” is as catchy as it has venom in its veins.

“Suffer our Dominion”, aided by Doug “Pinhead” Bradley, is simply an excellent song were aggressiveness and atmosphere collide resulting in a gem only Cradle can make. Dani Filth is back in superb form and shows he hasn’t lost his touch after all these years. Mrs Iratni provides some subtle haunting interludes in the form of the already mentioned intro, “Here comes a Candle” and “Ashen Mortality” while the rhythm section and guitars still pack quite a punch.

I can only conclude that when you like Cradle of Filth this album will not disappoint. In fact this album surpasses my exception and is better than their previous opus magnus “Cryptorania”. The music still sounds as exhilarating as when they started and that means something. Fans can purchase this album blindly. Good to see this ground-breaking act is still in optimum form and “Existence” is not a futile attempt but impresses me with its sheer quality song-writing and really cool songs. So you can say that this album should be called “Existence is more than justified”. Great stuff!

Track-list:
01. The Fate Of The World On Our Shoulders
02. Existential Terror
03. Necromantic Fantasies
04. Crawling King Chaos
05. Here Comes A Candle… (Infernal Lullaby)
06. Black Smoke Curling From The Lips Of War
07. Discourse Between A Man And His Soul
08. The Dying Of The Embers
09. Ashen Mortality
10. How Many Tears To Nurture A Rose?
11. Suffer Our Dominion
12. Us, Dark, Invincible
13. Sisters Of the Mist (bonus track)
14. Unleash The Hellion (bonus track)