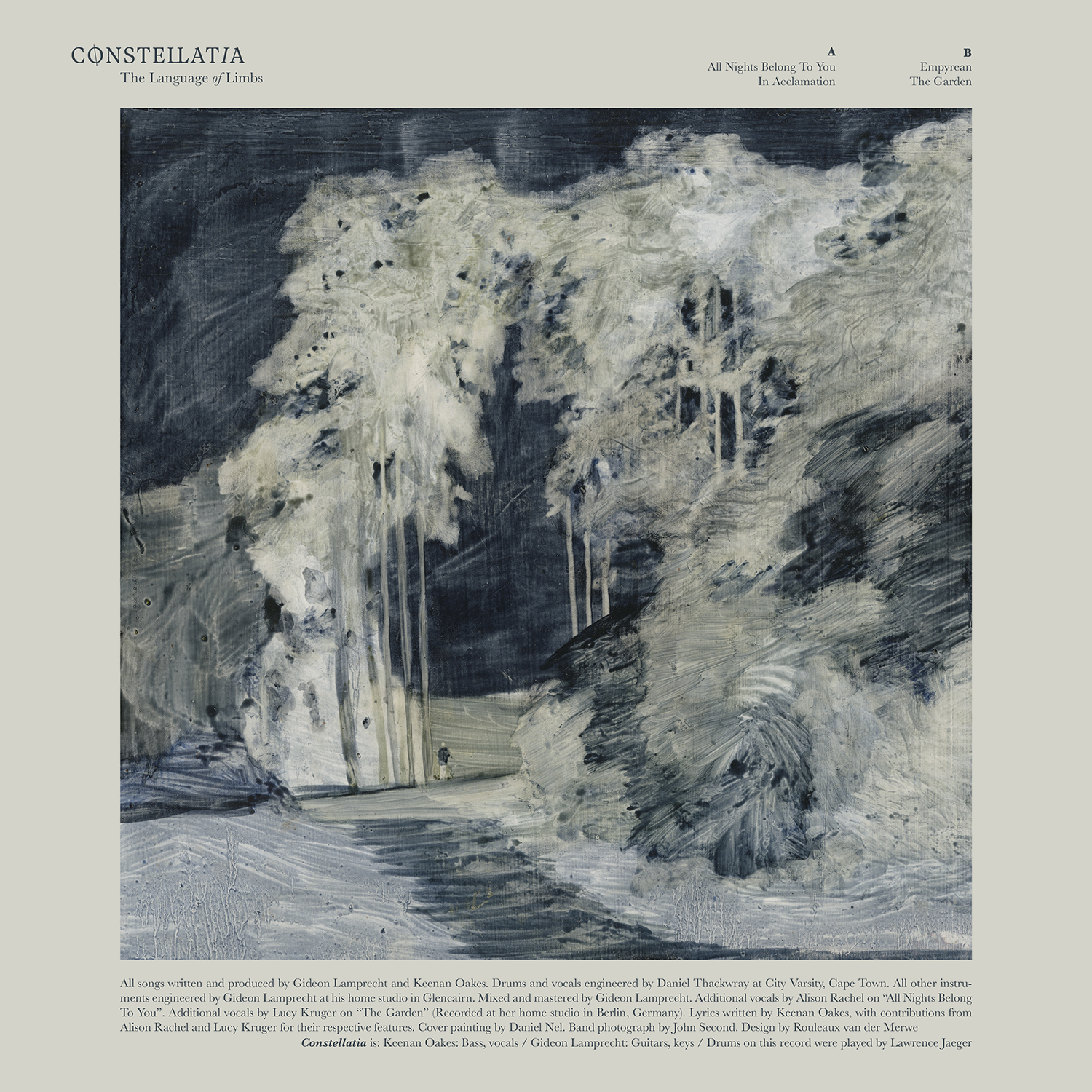 In the wilderness that is our promo inbox, we’re often on the lookout for new musical gems. Most of the times, we end up empty handed, but sometimes you strike gold. This certainly holds true for South Africa’s Constellatia. While sampling their record, ‘The Language of Limbs’, it was clear from the outset that this post black metal duo delivered something quite special with their debut.

The album opens with “All Nights Belong to You”, in a fashion you could expect from a post (black) metal band. Clean guitar melodies build atmosphere and at the other end of the spectrum, the tortured vocals and screams and raw riffs and drums are present to remind you that you are listening to a metal (influenced) band. The track, with guest vocals from Alison Rachel, can easily be described as dreamy and accessible (every now and then, I’m reminded of Devin Townsend’s work).

“In Acclamation”, starts a bit more dramatic as the tempo taken down a notch. After about a minute, Constellatia speeds up again. The song is musically heavier than the opener, with a larger role for the vocals, drums and guitar riffs. The lack of female vocals and the dense atmosphere and the dramatic mid tempo parts give the entire song an air of hopelessness.

During “Empyrean”, the listener is taken further down into the darkness. The harsh vocals and sometimes desperate sounding clean vocals take the lead role. The lead guitar in the second half of the song: resonating, high notes and slightly muddled, lend the track a (little bit) of an early Alcest vibe.

Album closer “The Garden” features another guest vocalist, Lucy Kruger. Her soothing, warm voice fits the blackgaze vibe of the track perfectly. One would almost expect this to be a dreamy, pop song, rather something made by a metal band. The raw vocals kick in soon enough to remind you that you are in fact not listening to a pop duet. Constellatia furthermore demonstrate that they’re not meant to be tied down to one genre, as they elegantly weave in two short, almost classic rock like solo’s before returning to the sounds of extreme metal.

There is one potential issue one can have with ‘The Language of Limbs’”: the production quality. The harsh vocals are sometimes badly audible, riffs are hardly distinguishable and drums, inelegantly, pummel through the entire record. The metal aspect of the record is sacrificed to make room for the beautiful, melodic and atmospheric passages. Nevertheless, Constellatia manage to convey a message of promise. The songs hold a massive potential to reach larger audience crowd when polished a bit. So, anyone who feels bit of love for the post (black) metal genre, should definitely listen to this. It’s worth all your 35 minutes.

Tracklist:
1. All Nights Belong to You
2. In Acclamation
3. Empyrean
4. The Garden