On the 26th of January, a rather unusual package of epic black metal, post-black and gothic/doom metal graced the Baroeg with a visit. Three bands, united in their talent for music, and, as it turned out, for playing live mesmerizing.

First band to hit the stage was Sojourner, an international group with members from New Zealand, Sweden and Italy (see also the interview we did with them here). The music can be described as a Romantic and nature inspired atmospheric tapestry of melodic black metal (with rubbings towards Caladan Brood, Saor and bits of Summoning). Sometimes a bit laid-back (Aeons of Valor), sometimes epic (Titan) – but surely never a dull moment. 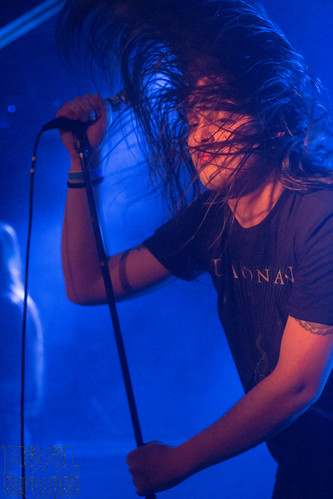 Irrespective of their limited live experience as a group, the show was a pleasure to watch. Vocalist Emilio Crespo might have competed a bit with live bass player Scotty Lodge on who owned the stage, making both their dynamic appearance a fun spectacle. Emilios vocal performance live was a very convincing addition and extra dimension to their two full length studio recordings. And no doubt either on where the dominating magic of Sojourner comes from: the interplay between Chloe Bray (guitar/female vocals) and Mike Lamb (guitar) is just spot on. Not less so during their live show.

A band perhaps better known for their impressive guitar work is the Austrian post-black metal formation Harakiri for the Sky. Their lyrical topics are predominantly dealing with the aspects suicide and depression. The music dualistically works to enforce this by contra-puncting this in shear veracity, aggressive drumming and intricate riffing. Their guitar lead, Matthias Sollak, is an incredible musical talent to watch play. Vocalist J.J. appeared as if a bit caged on the small podium, often moving around restless. That did nothing to lessen the vocal quality, which was raw, organic but also of high quality.

Playing material from their latest release Arson (Heroin Waltz, My Bones to the Sea) and to my somewhat greater delight also material from personal favourite III:Trauma (Funeral Dreams and closer Calling the Rain). A mesmerizing show that was well received by the audience, which was mostly a waving mass of nigh on constant headbangers. 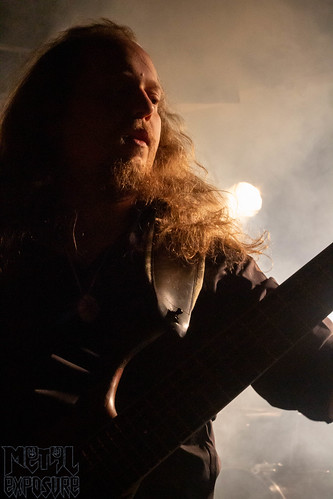 The temperature in the Baroeg rose up to tropical temperatures, as the venue was completely packed. It’s quite rare that the supporting acts already wear out the audience, yet tonight was an example of just that. Still, the atmosphere was booming and everybody was ready for Draconian to perform.

As the band released Sovran in 2015, most songs performed from came from that album, with a small mix of older tracks. Heike sang all songs with passion, as did Anders. Their stage performance pulled everybody into an emotional state that cannot be described. Anders’ raw grunts, accompanied by Heike’s smooth soft voice already sounds great on an album, but it’s given so much more depth during a live show.

At the end of the show, we got a special present in the form of an unreleased song. Burial did not only gave the audience goosebumps, but it was easy to see the emotion in Heike as she sung the song with passion. This truly was a night to remember. 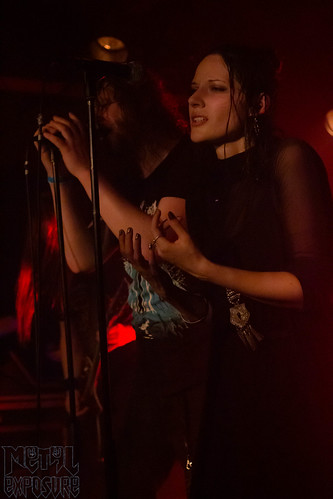