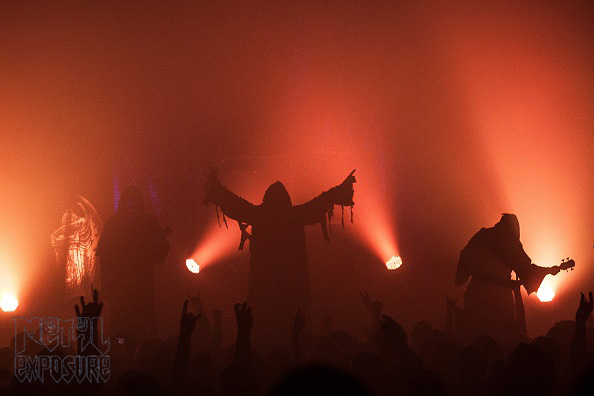 Words and pictures by Laetitia
Norwegian black metal band Mayhem needs no introduction. The band’s tumultuous past involves church burnings, suicide and murder, but also a discography featuring albums that are now seen as one of the cornerstones of the black metal genre. Thus, when Mayhem set out on their Mysteriis Dom Sathanas tour, performing this cult record in its entirety, it was no wonder that people came out on a regular Tuesday night to hear and behold this infamous band. Metal-Exposure attended the show in Haarlem, the Netherlands, where Dragged Into Sunlight and the Dutch band YAOTZIN would play as support. 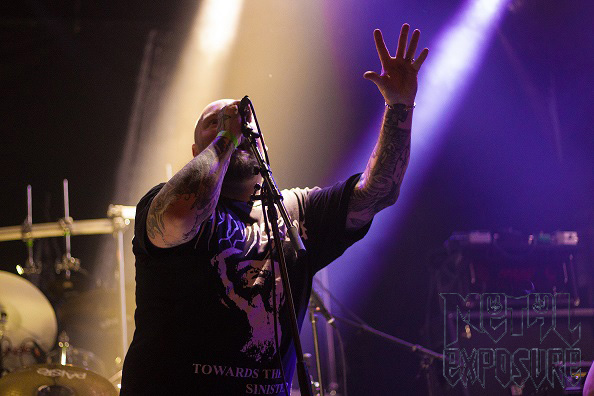 The Dutch black metal band YAOTZIN was finishing their set as yours truly entered the venue. From what can be gathered from a couple of songs, it appeared that the group played a solid show but also a tame one in which power and atmosphere were the lacking aspects. It was up to Dragged Into Sunlight from the UK to plunge the night into real darkness. The stage was decorated by a big chandelier with an animal skull and white candles, exactly the kind you would imagine in an underground ritual of the sorts. 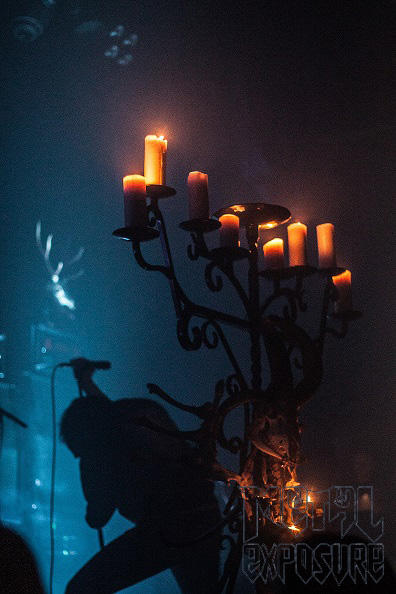 Having not seen this band before, yours truly didn’t know what to expect. Afterwards, it is safe to conclude that the devastating, misanthropic music is well reflected in the band’s stage presence. While playing their crushing, dragging riffs alternated with peculiar soundscapes, the musicians hardly ever faced the crowd and the musicians literally shrouded themselves in darkness when the venue was not set ablaze by strobe lights. These lights were so intense that it felt like you were having a seizure on the spot. Even though a lot of visitors might have been annoyed by stage set up, it perfectly displayed the message of hate and contempt of this collective.

Anticipation rose as Mayhem prepared for their Mysteriis Dom Sathanas set. The venue appeared to be nearly sold out as many (black) metal fans took the opportunity to hear this black metal classic integrally. The band played a taped message at the start of the show asking people to put down their phones and to 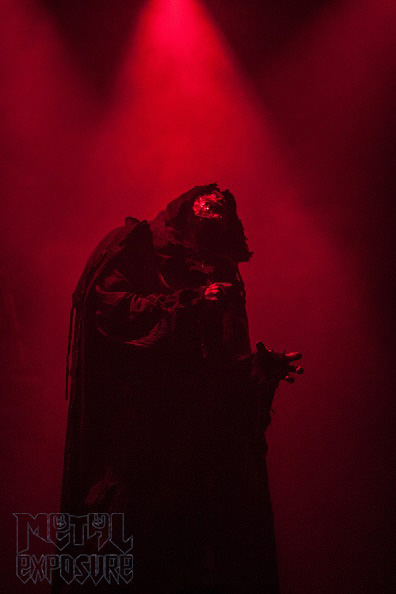 not take photo’s, and if they still felt the need to do so, without a flash. They could have played this tape to deaf people, since phones were flashing during the entire set.

Against a background of deep red, blue and white lights, the shaded, hooded musicians of Mayhem fired away classic after classic, from the icy Funeral Fog to Pagan Fears. The musicians stoically played their parts and hardly took notice of the crowd, who in turn were in awe by a very on-the-point performance. Vocalist Atilla uttered his wretched and tortured vocals convincingly, Hellhammers drum kit is a sight to behold by itself and the aggressive riffs created a turmoil in the ears of the fans and even urged them into a mosh pit every now and then. It cannot be denied that the Norwegians gave an impressive and theatrical show this evening. Perhaps even a bit too much of the latter because at the end of the night, the feeling surfaced that Mayhem traded a bit of their edge for showiness.