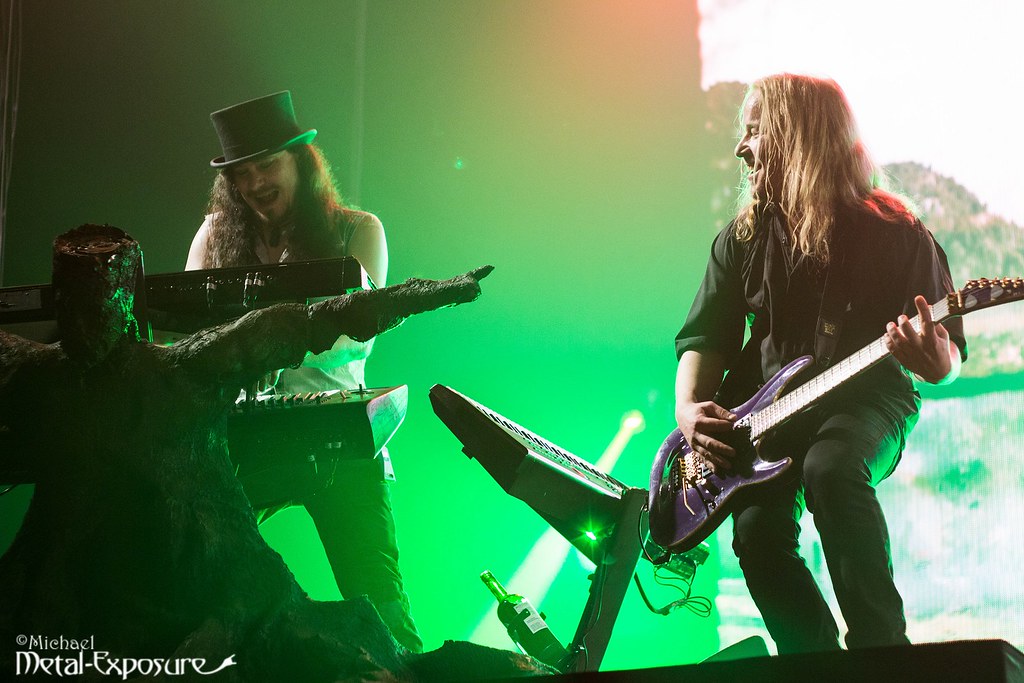 Review by Rob – Pictures by Michael.
Since Floor Jansen joined Nightwish three years ago, they never played a show in The Netherlands. So with their latest successful album Endless Forms Most Beautiful out, Nightwish embarked on an European tour and made a stop in the Netherlands. Not for one show, but two since the first one sold out pretty quickly. Special guests on this tour are Amorphis and Arch Enemy. 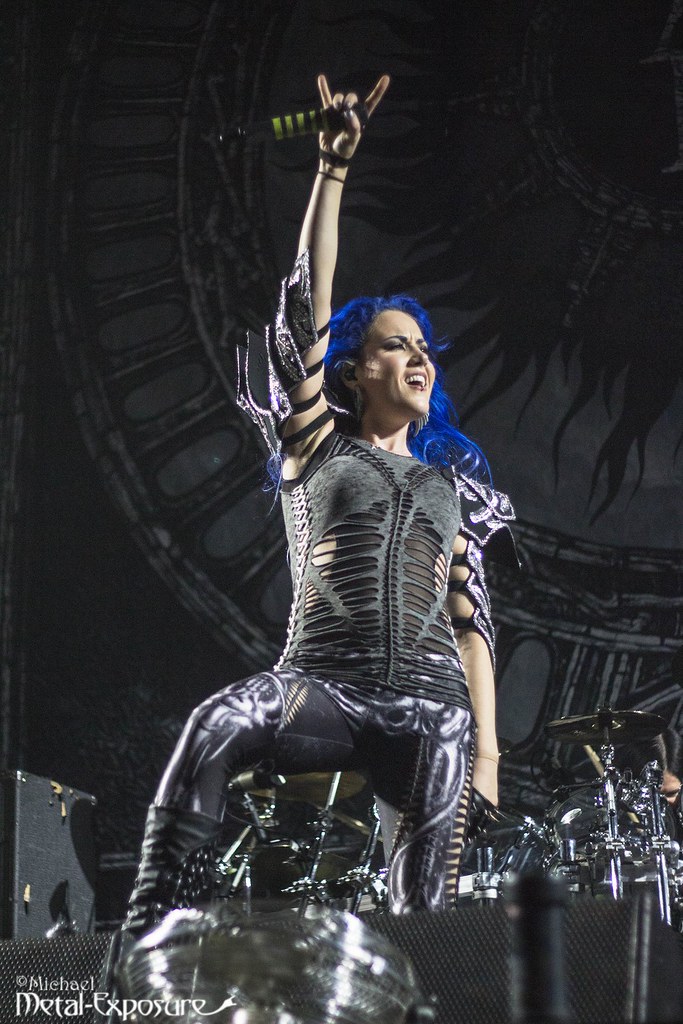 After huge traffic jams and a tight security, I’m just in time to see the Finnish metallers from Amorphis. During the first song there were some problems but that was quickly over when they second song started. From there on it was a good show which was already over after 35 minutes. During that time they mainly focused on their latest album. Some other well known songs played were House Of Sleep, Hopeless Days and Silver Bride. Even though only half of the venue was at that time, the response was good.

When Arch Enemy started their set, the venue was nearly packed. Personally don’t like the new singer and their live shows weren’t that good until now. Today is a bit different. With a lot of energy and good performance, the band gets a good response and cheers from the crowd. Half of the set contains songs from their latest album War Eternal. For me the highlights of the show were Ravenous and Nemesis. The rest of the set was filled up with a lot of Khaos Legions songs. Altough I prefer the old music and older line up, this show was pretty good. I really loved to see Jeff Loomis (ex Nevermore) shredding the guitar on stage. A good addition to the band. 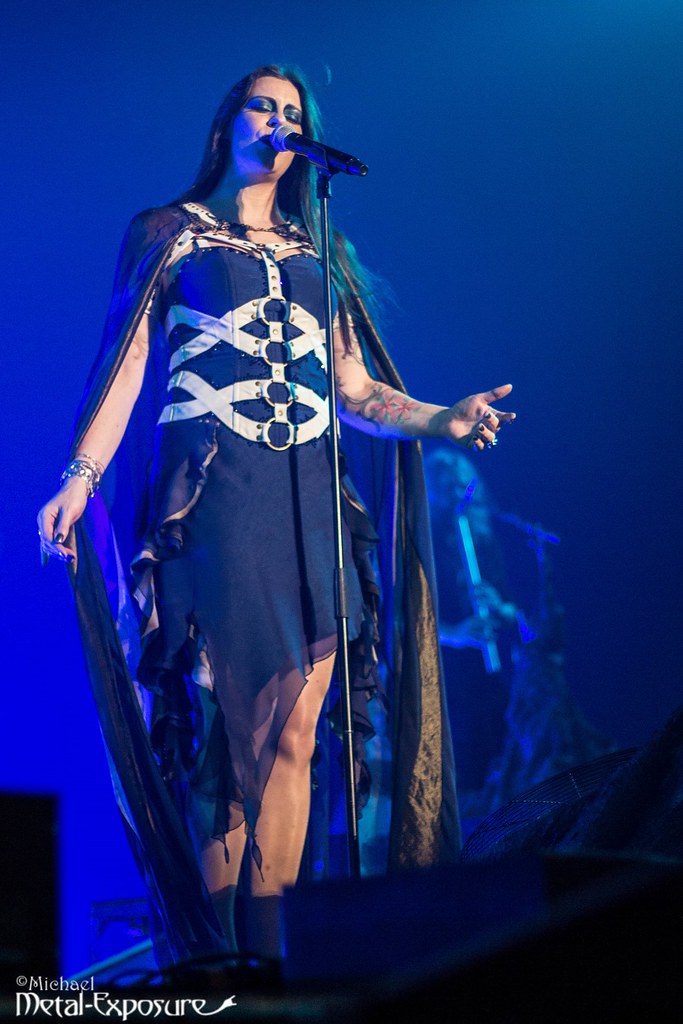 Finally it was time for the band everyone was waiting for, Nightwish. Suddenly the lights went out and within seconds Shudder Before The Beautiful started with a big bang. That was a nice surprise since most people expected an intro. Right away followed another new song: Yours Is An Empty Hope.

After that it was time for Ever Dream, the first Tarja-era song. A great performance of the song that many love, including me. A couple of new songs were played, alternated with songs from their previous two albums. The Islander was great with all the lights in the venue, a fantastic drum and keyboard battle that served as the intro for Weak Fantasy and 7 Days To The Wolves was brought to a fantastic climax. Floor and Marco are just perfect together. I was happily surprised that The Poet And The Pendulum was on the setlist and with Floor it all came more together, it was just perfect. That’s the case with all the songs that Anette originally sung on the albums. Storytime, 7 Days To The Wolves, Last Ride Of The Day, The Islander, they all sound more right. After that it was time for a more extended part of the Tarja era. With Nemo, Stargazers, Sleeping Sun and Ghost Love Score they chose some great songs. I Really loved it to hear Stargazers live again. Floor did a really good job on those vocals. Ghost Love Score was just sublime. I dare to say it is even better than with Tarja and that version was already fantastic.

With already two pretty long songs in the set I didn’t expect to hear The Greatest Show On Earth, but luckily enough, they played it. It served as the last song of a full two hour show. The first part on the keys was really hypnotizing. They played the first three chapters of the song, the other two served as the outro of the show. This was by far one of the highlights of the show. The big screens on the back that showed all kind of videos together with all the awesome pyro, fireworks and the smoke cannons served as a big extra to bring the show to the next level. 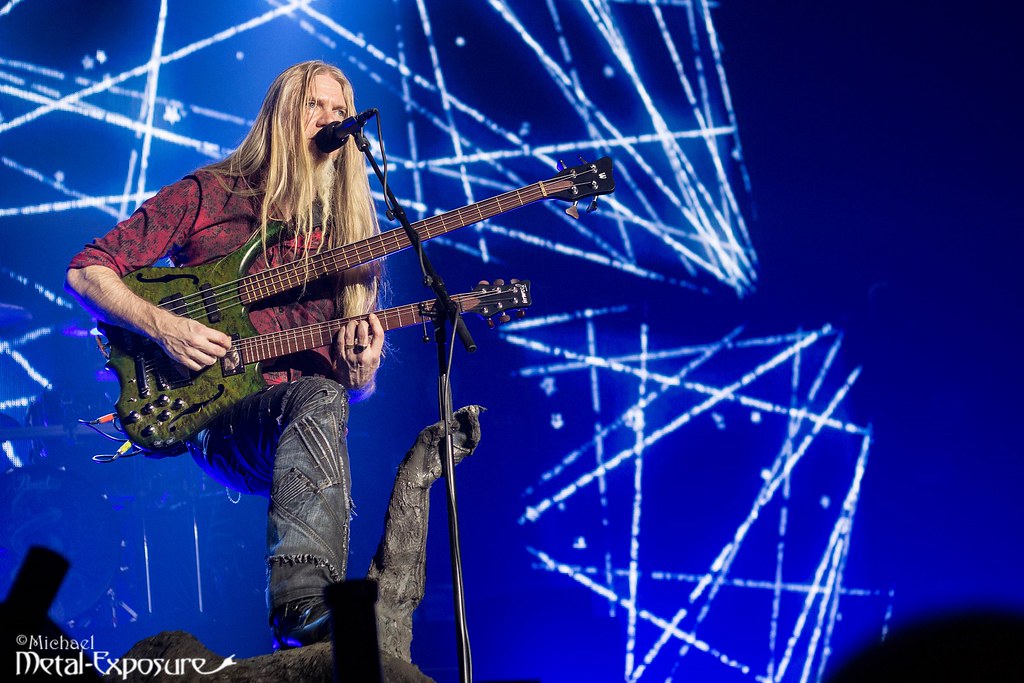 It was obvious that the band had a lot of fun during the show. It was great to hear the loud heart-warmed welcome that the crowd gave to Floor, the cheering went on and on, she really appreciated it. She was in top condition and showcasing the wide range of vocal capabilities she has to offer. I have seen a lot of shows with the previous two singers, also one with Floor a few years ago, but this was for sure one of the best ones I have seen so far. The band was in top shape. Also, the addition to the music that Troy brings is very welcome and also give some of the older songs a nice new twist. This was the first time I saw new drummer Kai Hahto playing with Nightwish. I knew him from his previous bands where he really kicked ass and I love his drumstyle in Nightwish. The sound during the show was really good on the spot I was standing, especially the sound of the bass that was put good into the mix. I hope it won’t take long to see them again.