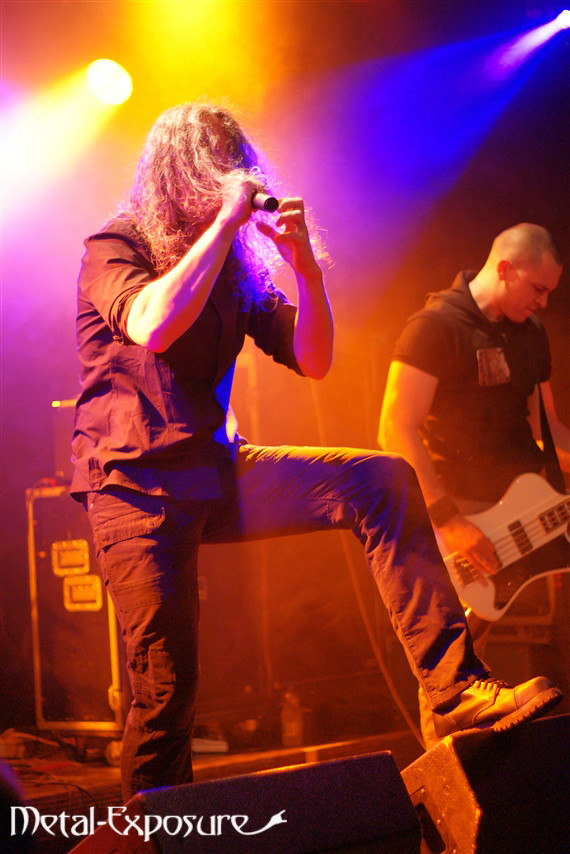 By Wouter B.
Wednesday May 6th brought a mixture of not-so-run-of-the mill bands to the locales of Arnhem, the Netherlands. Hailing from Israel but living (somewhat branded and exiled) elsewhere: Melechesh headlined the evenings’ quintet, together with the Norwegian (elite?) melodic black metal constellation Keep of Kalessin. Supporting acts Tribulation, a progressive black metal (rock?) from Sweden along with the Italians of Embryo and Slovenian Cvinger. Not so run of the mill? Well this evening brought some surprises!

>Due to responsibilities elsewhere (one needs to work to pay for the beers and such) your truly didn’t make it in time to witness Cvinger, the first band of the evening. Therefore unfortunately no review on their show. My evening began with the five headed Italian group of Embryo, who made use of the drummer of Fleshgod Apocalypses Francesco Paoli for their latest album, which sounded very promising. Consisting of a vocalist (Pasolini) , guitar (Eugenio Sambasile), bass (Nicola Iazzi), keyboard (Simone Solla)and drums (Enea Passarella) the guys kicked off with some pounding death metal sounding ‘quite okay’ if not to fancy. Roberto’s vocals made good that which the band missed partly during their play: enthusiasm and variety, by both screams, grunts and some semi-clear vocal pieces. Their show came a bit lackluster, and not hearing much of the keyboards didn’t help in that respect. The (staccato) drums didn’t have the drive or punch I was hoping for after hearing of the input from Fleshgod’s Francesco. 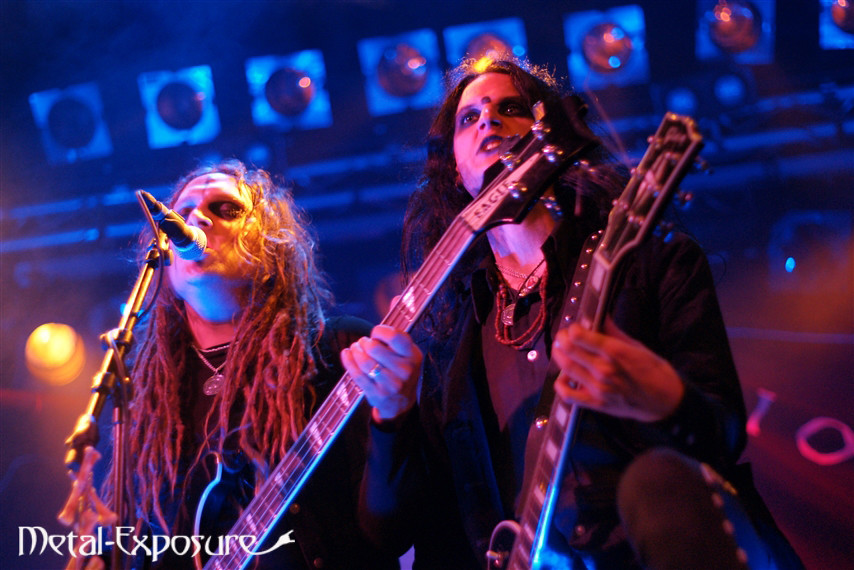 Next on the list was Tribulation, promoting their new album (see review here) ‘The Children of the Night’. This Swedish four piece: Johannes Andersson (vocals, bass), Adam Zaars (guitar), Jonathan Hultén (guitar), Jakob Ljungberg (drums) plays a very special kind of (danceable!) metal. Sporting a kind of rock-n-black death metal style, these guys never bored me. Adams guitar work was brilliant, shifting from solos to almost blues like interlopes. The interplay between drummer Jonathan and melodic bass work of front man Johannes is a welcome change to the metal sound as we know it. Reminding somewhat of Dark Tranquillity’s slower pieces of Damage Done and the overall weirdness of Solstafir, this band really does offer something new and pleasing to my ears. These guys were really entertaining to watch as they made for a lively show, including some overdramatic guitar showing off by Adam. On that note: the theatrics these Swedes showed were almost a bit (if not completely) poseuresque,. Do I really care? No, the music spoke volumes. If you do have the chance to see them go do so, they rocked! 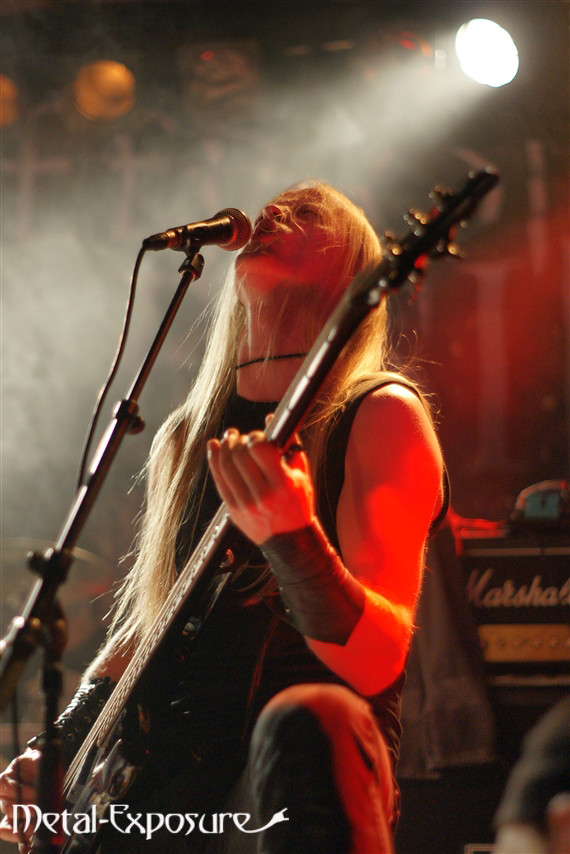 Keep of Kalessin was the band I originally came for. Being somewhat of line-up plagued group from Trondheim, I expected an all or nothing experience, as I very much like their two latest releases (Reptilian and Epistemology). It was neither though… Front man Obsidian Claw, taking care of the guitar and lead vocals, manages to combine both very well. The complexity in sound this band produces is commendable, especially given that they only use one guitar. The clean co- vocals by bass player Wizziac really add to bands’ sound and variety, especially during the ensembles. Although playing very well, the play and music didn’t really put this band in the place I had hoped them to be. But then, the last song came: Ascendant, which made up for a lot of the things I missed earlier. Blasting, melodic and yes, even catchy, this song drove the show home.

Last band of the night, headlining the tour, was the middle east black metal band Melechesh. Having entered my music collection only recently, I was immediately taken by their pounding, melodic and exotic latest album Enki. My expectation on the show were somewhere in between enjoying the melody, dancing the around and moshing the rest out of it. They kicked off with Tempest Temper Enlil Enraged, likewise the opening track of Enki. Clearly experienced front man Ashmedi showed skill both vocally and string wise, playing the lead guitar. Bass player Scorpios and guitarist Moloch initially appeared as unrecognizable dessert warriors, sporting black facial wraps. This made place for some fresh air after about two songs, given the well above average temperatures inside the venue. The play showed energy and life of which I normally expect from bands like Ensiferum and (old) Children of Bodom, even on such a small stage. Maybe this is because of the guitars playing with and against the drums, in combinations with melodies on keyboard and other instruments. Maybe it’s because I really like them. But wow; that was a awesome show and one addition to my collection of LPs. A great recommendation for this summers’ festivals (Party San and Hellfest), I will definitely go see them again! 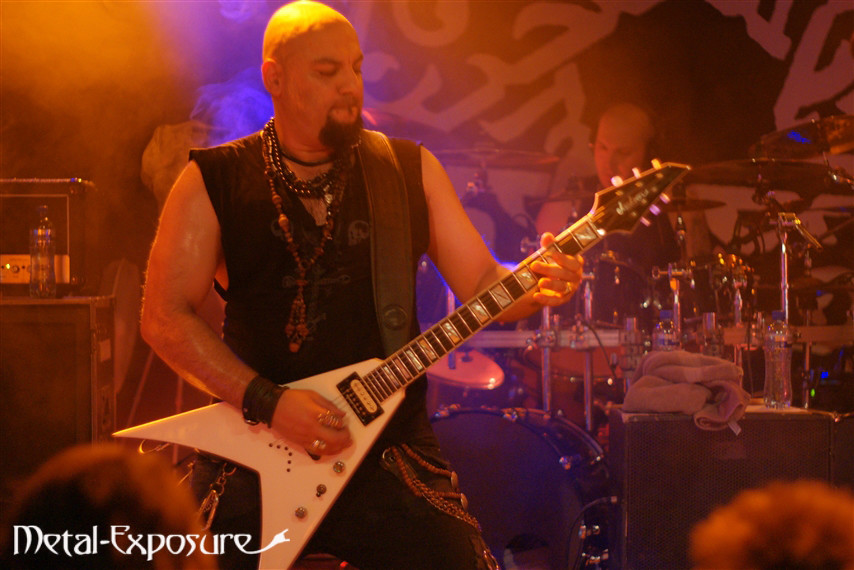